My Grandad used to use the word “belter” when anything was really good….like REALLY REALLY good.

The wedding of Tom and Claire looks like a belter to me, all the fun of the fair with the cutest portrait shots, a million entertaining-your-guests ideas, sunshine and a brilliant cake baking competition come dessert table phenomenon.

And talking of cakes I think this might be my most favourite wedding cake ever…the tallest tower of fresh strawberry victoria sponge. Yes it is so gigantic it looks as though it is about to topple over but there lies the charm – you can’t get more home made than that.

And with regards the helter skelter title there actually is one. Oh yes. And it provides the perfect backdrop to one of the greatest maids “group shots” Lolly and I have ever seen.

With thanks to photographer Nicola Thompson for brightening up everyone’s Tuesday. 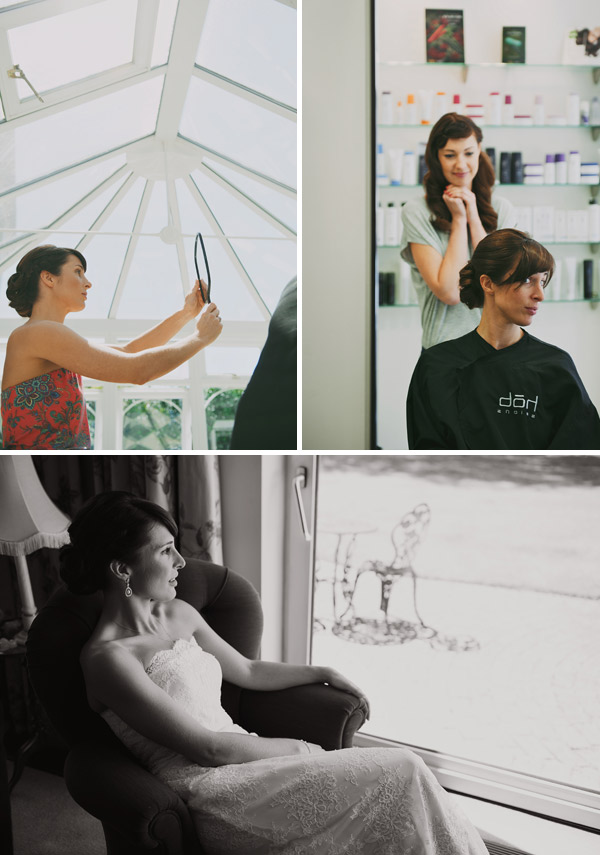 My hair was by Hobs Salon in Gerrards Cross, make up by Jennifer Knight (a family friend of my husband’s.)

I knew I wanted a informal look, and that I wanted to wear it up with a plait but could never find the exact image until Kate Middleton stepped out at an Olympic Gala with the exact style (the one where she wore THAT Blue Jenny Packham dress!) You just can’t escape the Kate Middleton effect no matter how hard you try it seems! 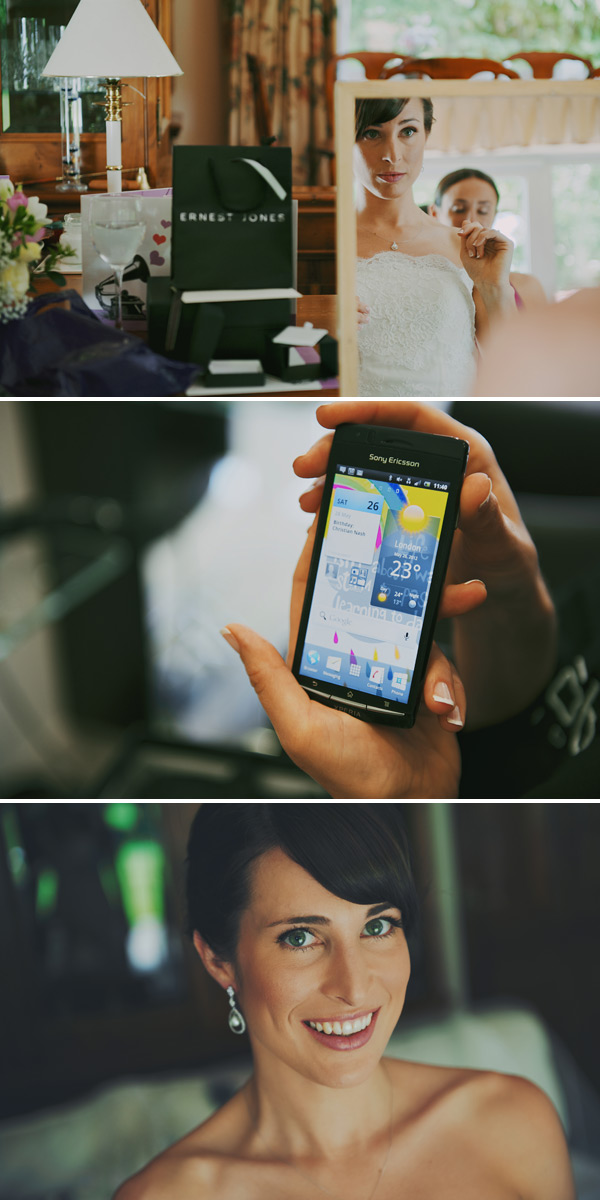 I had a David Fielden veil for the ceremony, long with lace trim, and then I had a hair piece made by my best friend and bridesmaid Sarah for the reception. My jewellery was from a shop in Australia called Glamadonna that I’d seen while I was out there and my best mate had used for her wedding.

The girl there couldn’t have been more helpful on email when I was looking to buy when I got home from Oz and would email me photos of her wearing the ones I liked the look of so that I could see how they would look on! 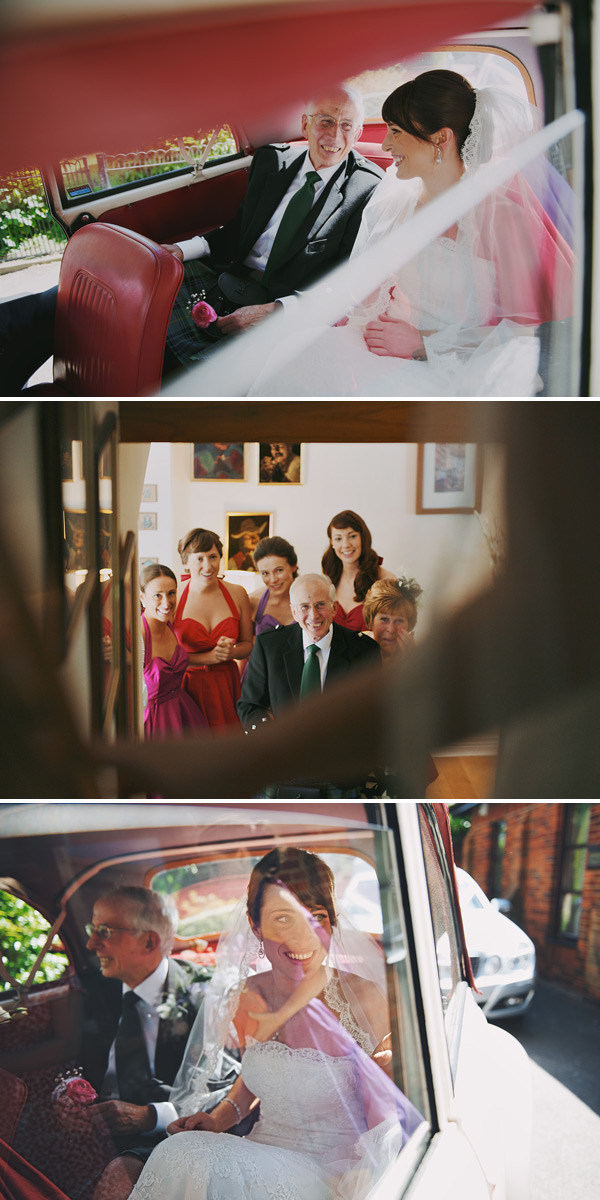 I actually thought I had found “the one” a few months before when I first started looking, on my first trip to the bridal shops in fact… it was in Amanda Wakely and it was incredible, but being a first timer I had forgotten about budgets and asking prices before you try dresses on and get your hopes up, and sadly that beautiful creation was about 6x over my budget! I thought about it nonstop after that, I even thought of ways I could save for it… car boot sales, cutting back on other ideas… but then there was a day when all my BM’s were together for the first time (one lives in Australia) and we went to one last shop before I sold a kidney for the AW dress… and we found it! It was perfect and everything I always wanted my dress to be. Light, simple, lace, vintage feel and just really, really pretty. The girls all cried when I tried it on, so I knew it was the REAL one!

The dress was called Adonis from Teokath in Wimbledon. 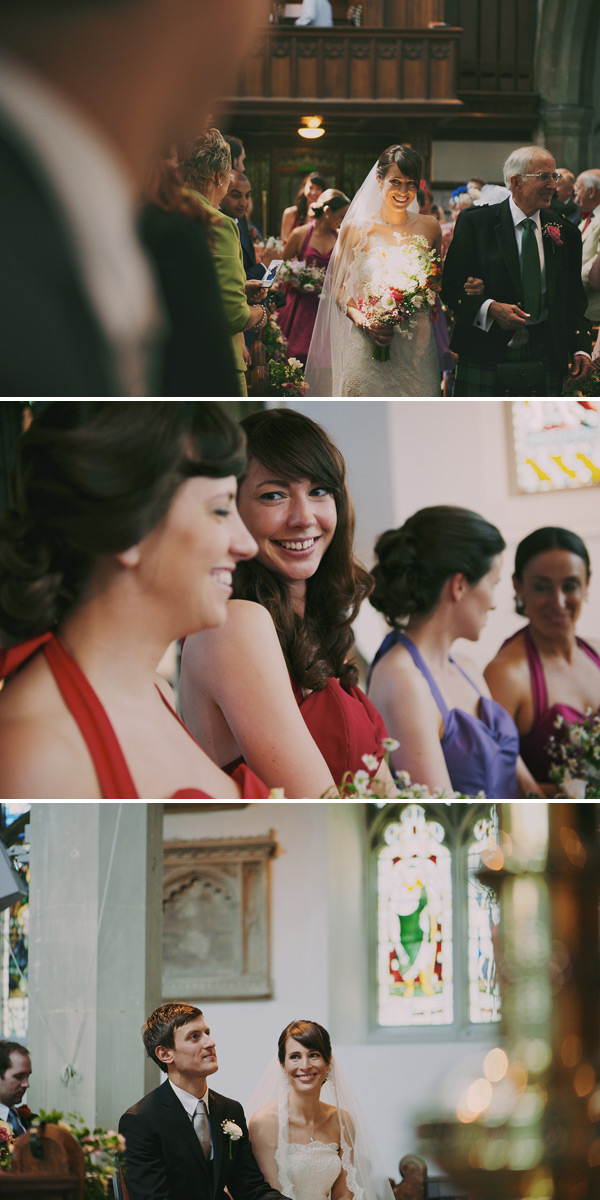 Tom wore a midnight blue 3 piece suit by Spencer Hart (waistcoat from Sandro) with a silver tie, and black patent shoes from Barker. I also secretly had his Dad’s necklace mended and polished so that he could wear it on the day so his dad would still be there with him, I gave that to him the night before. 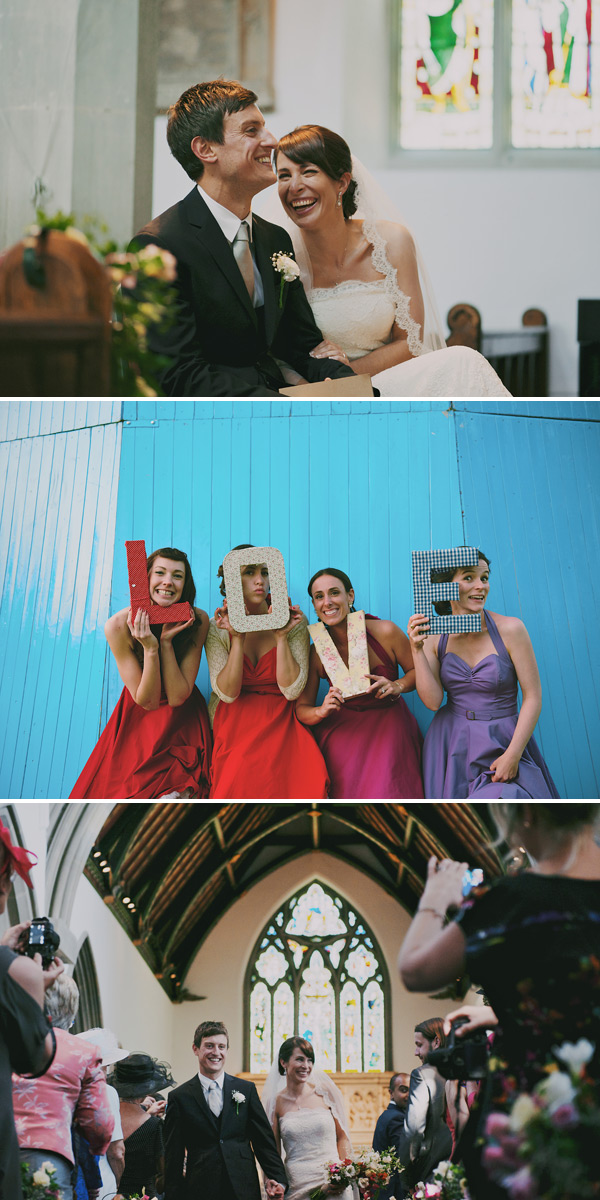 Groomsmen suits were all brought from M&S, and the girls 50’s style halter neck circle dresses were from a lovely lady on Etsy called Gin & Sin. There was no colour scheme, just as much colour as possible…but the girls all wore shared of red and purple and the boys ties were all dusky plum (all from Topshop.)

The girls shoes were sling back nude patents from Dorothy Perkins, perfect for the dresses and so reasonably priced! 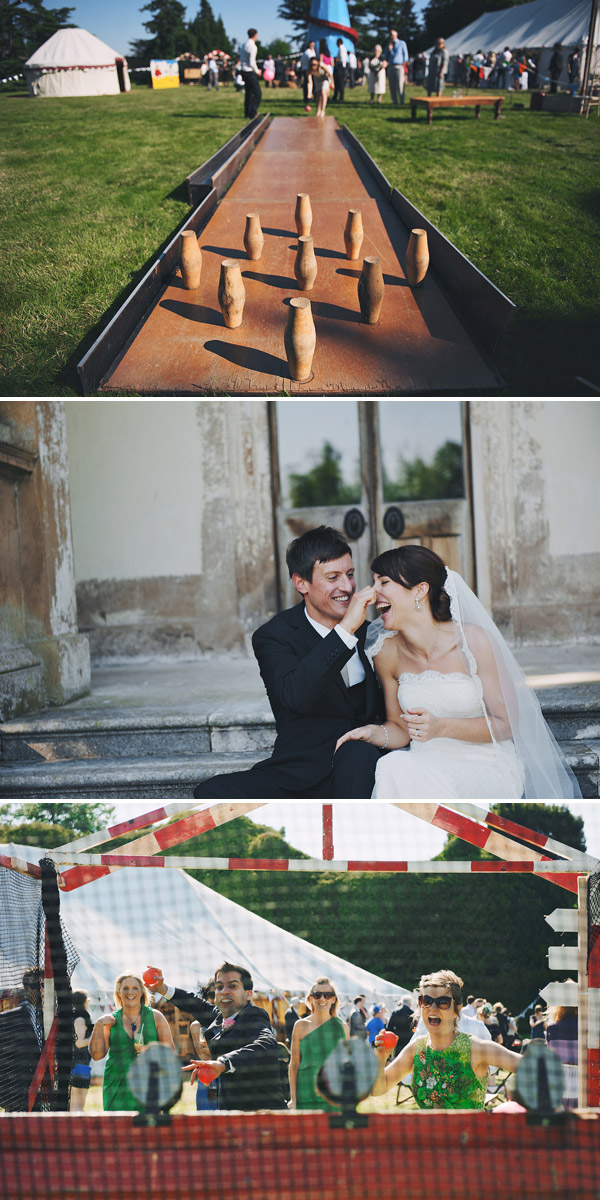 Where do I start with entertainment! So as mentioned, we wanted the wedding reception to be not only the best day of our lives, but to also rank pretty highly in our friends as well. Tom and I are all about having fun, so this day had to be a brilliant reflection of that. We met at a festival in Spain (Benicassim) through mutual friends and we go to probably too many festivals every year so that was the sort of vibe wanted, as well as something really traditional and British so the Fete idea was born.

We absolutely love a helter Skelter, so that was the first addition and from that grew the coconut shy, the skittles alley, the strong man striker, the beach stocks, the space hoppers etc! The marquee we hired was one that was often used at festivals (LP Bohemia) and the vintage ice cream van (Daisy) just finished it all off. 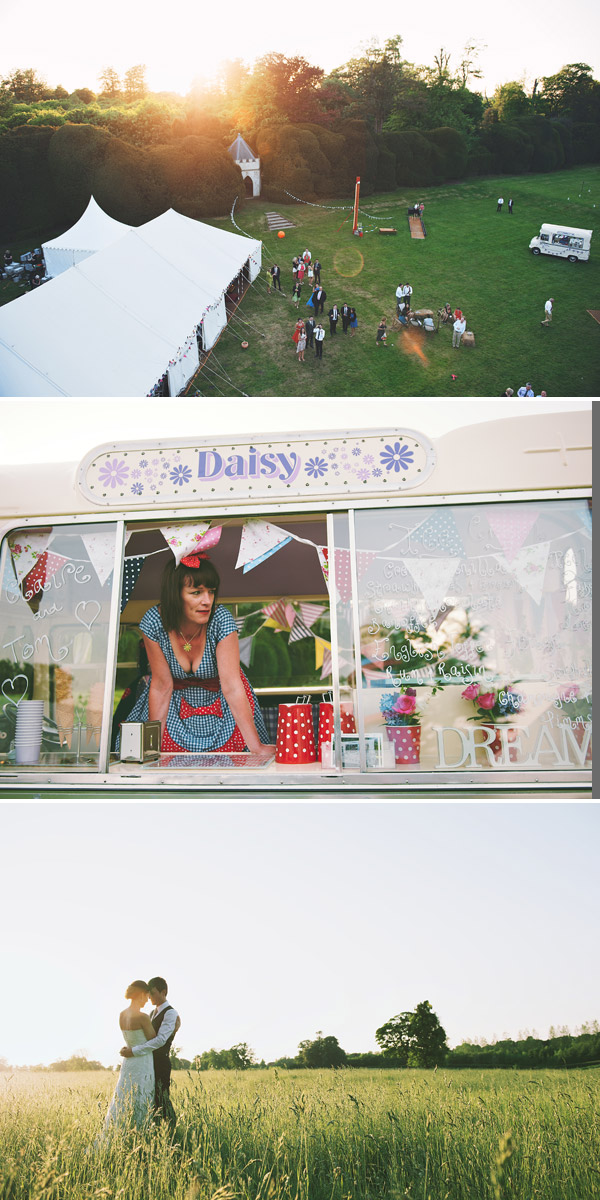 We knew the sort of wedding we wanted to have from the moment we met probably, it had to be a lot of fun… and seeing as we met at a festival… it had to have that vibe as well! Although that turned into more of a fete style as we got planning. So the hard bit was to get this all together… which is when I discovered Kelly at Boho Weddings who became our partial planner and on the day saviour! She then recommended various photographers but Nicola Thompson stood out straight away with the exact style we wanted. Someone who would really capture the atmosphere and fun… which she definitely did as you can hopefully see! 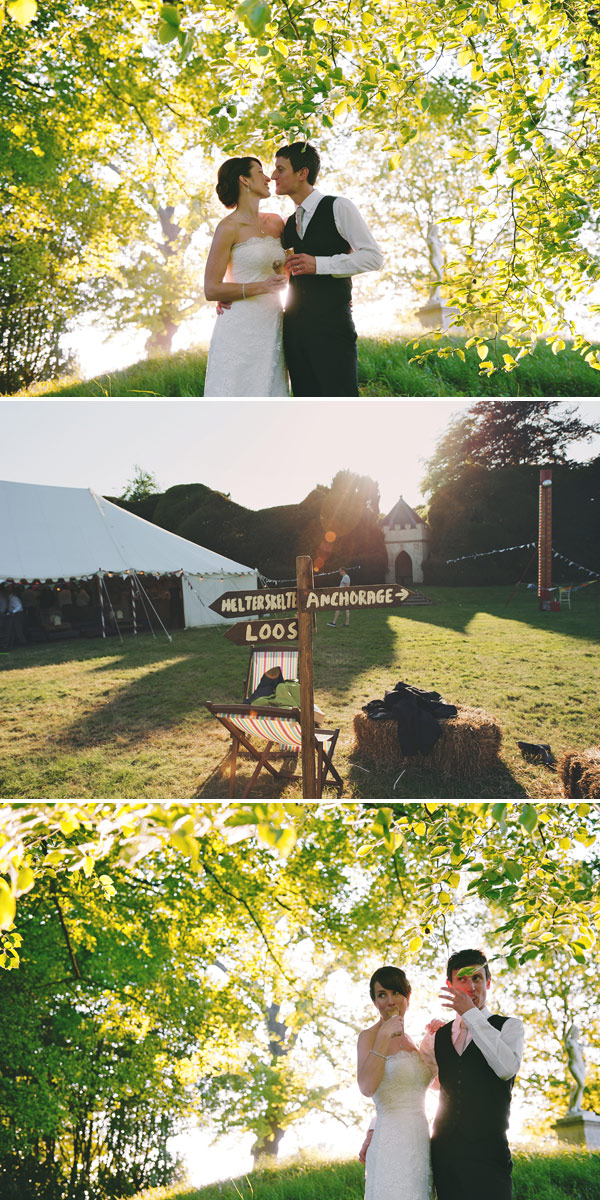 From looking on a few wedding blogs such as this one, we also found Mark Brown who we couldn’t have booked faster once we saw what he did. I must have watched all of his films and cried at each one! We just loved the style… it was less of a video, more of a piece of art!

Both Nicola and Mark were so lovely on the day, we hardly noticed them… yet after seeing the photos and film we realised they were always there and didn’t seem to miss a thing! The footage and shots from the field at sunset were amazing… it was one of my favourite moments of the day as Tom and I got to go off for a walk and just have 5 min’s on our own… at least we felt like we were on our own but as you can see they both got such incredible images from that time! Their enthusiasm and passion throughout really made it all feel very special, in fact they were so dedicated to getting the perfect shot that they commando rolled under and electric fence to get it… and Mark even carried me over it! Thanks guys, it was definitely worth the cow pat backs! 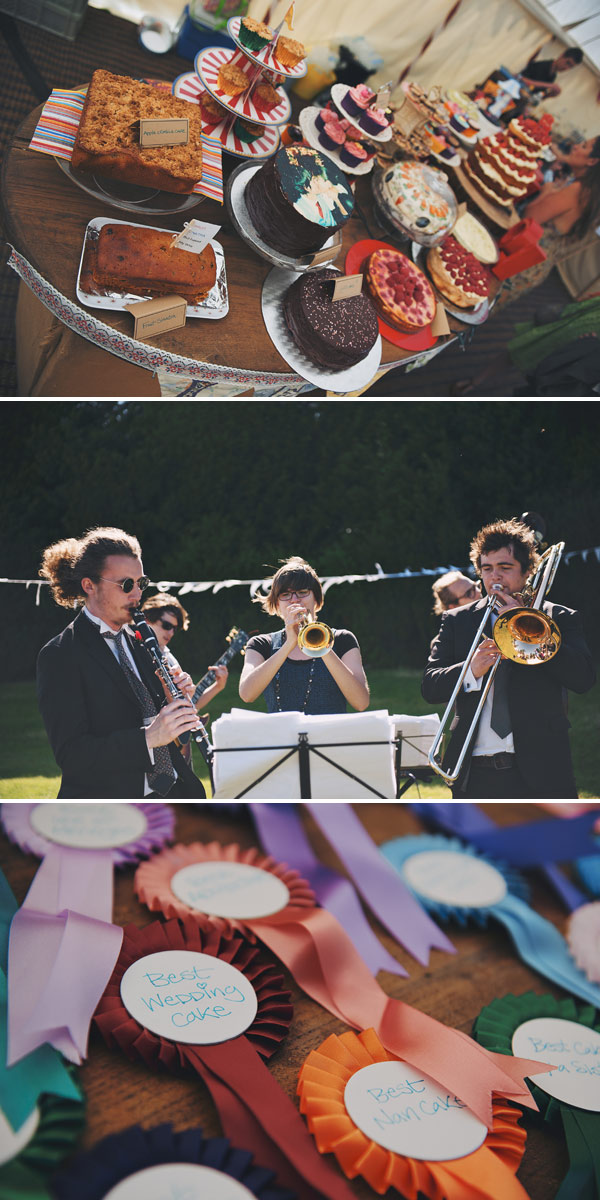 My mum organises the local town fete every year in Beaconsfield, and she always has 2 great competitions… firstly the phallic vegetable competition (amazing!) and also the cake comp, and we really wanted to re-create that so we asked 20 guests if they would be up for baking. I never expected the reaction we got, they all took it very seriously and the competition was very fierce!

Mum made the main cake which was a tiered strawberry and fresh cream Victoria sponge. The cakes became our desert, and we came into the dinner by awarding each cake with a rosette prize. Check out the Helter Skelter cake… that was the first cake that friend had ever made! 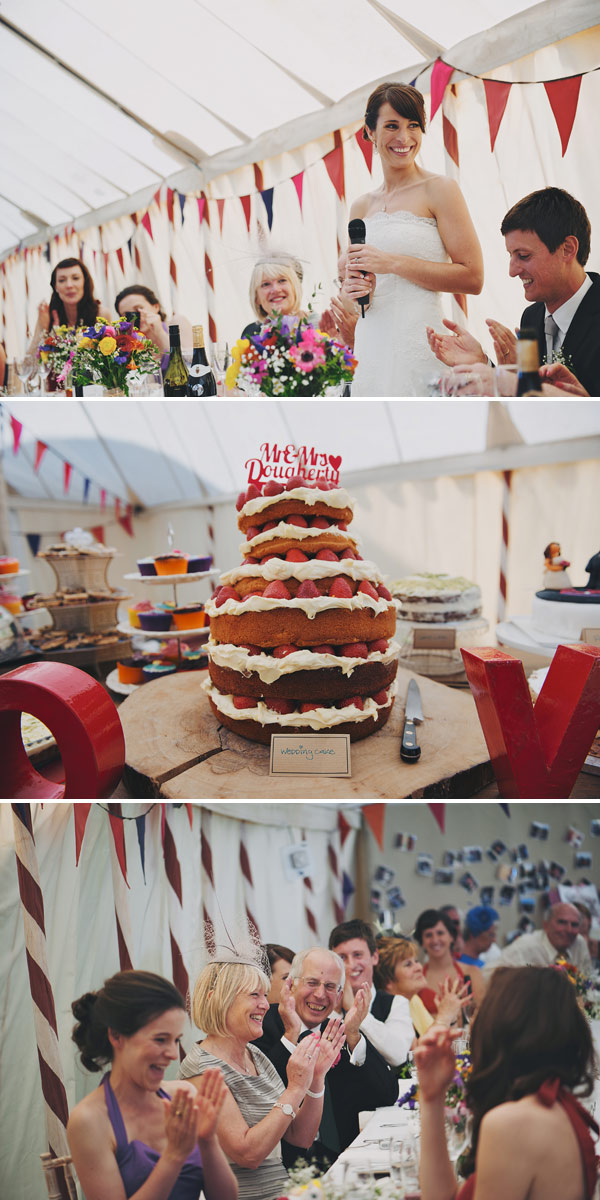 My church flowers were done by my mum and her team of helpers, and the bouquets and table arrangements were done by a school friends mum, Carol Rice, who was amazing… she totally understood the style I was after so I knew she would get it spot on, which she did. The flowers were a mix of Anemone’s, wax flowers, daisies and other wild flowers.

I wanted them to look like you’d gone out and just collected them from a meadow rather than a structured style. She even did us the same flowers in wellies at the entrance to the marquee to give it that Glasto feel! 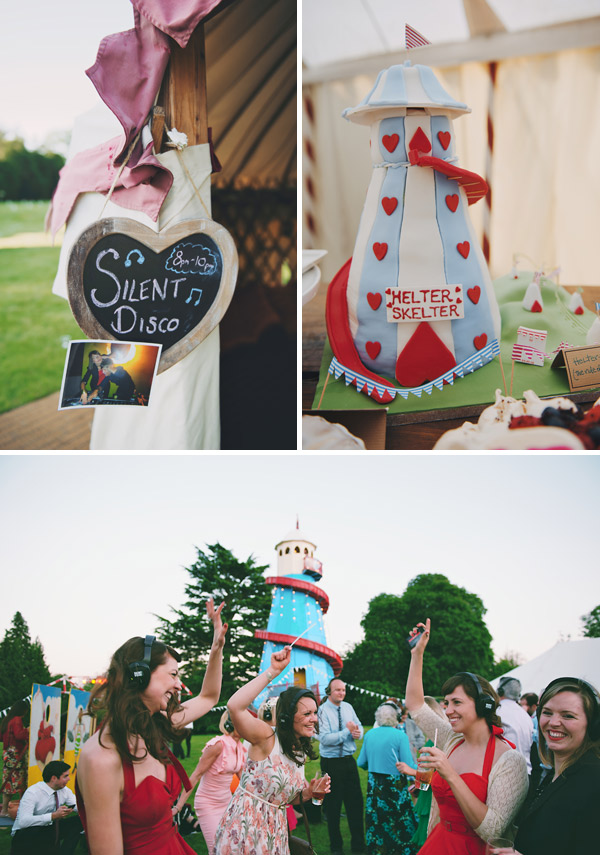 Music wise, we had our friend Ryan play keyboard versions of some of our favourite songs in the church, a dixy land jazz band playing as people arrived until dinner and then our 2 DJ’s were friends – Chris Nash (XFM/Absolute) and Will Nicol (Big Fun/Soul Shaker) I have never seen people dance so much at a wedding….they were incredible! 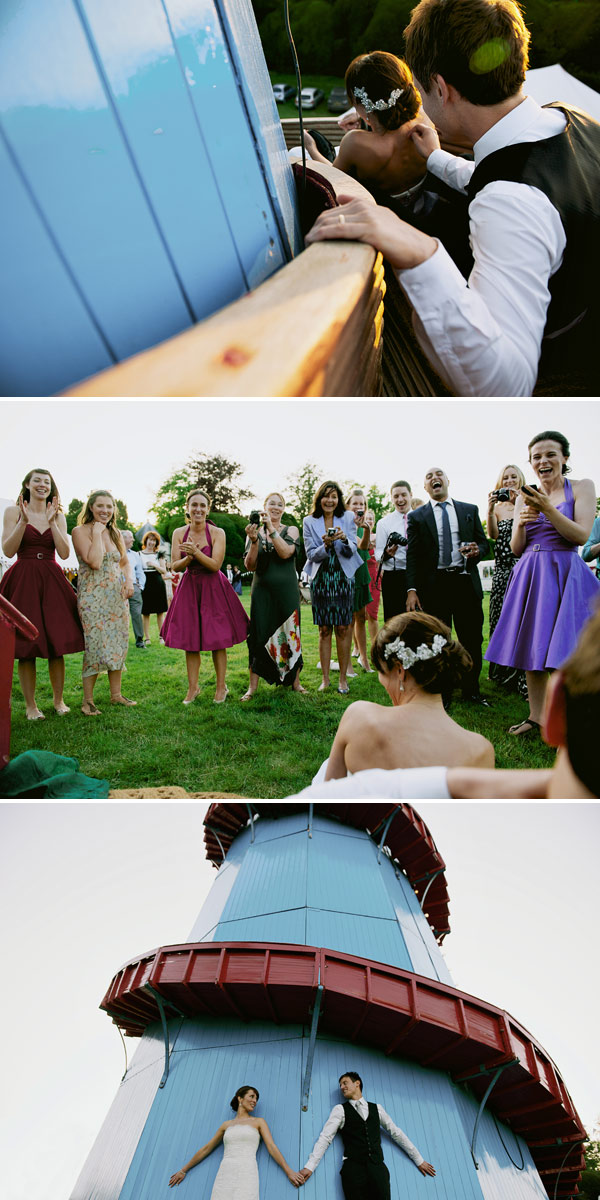 We spent a long time on the first dance song, as I work at a record label and we are both really into music (and met at a festival!) we were being quite fussy….we tried out classic crooner tracks, old tracks, new tracks, off the beaten track tracks…..but then settled on a song that we both love that reminded us of a brilliant moment together at Glastonbury when we saw them headline and play the song as I was sitting on top of Tom’s shoulders! The track was ‘To The End’ By Blur. Turns out it was Nicola our photographers as well!

I walked down the aisle to ‘God Only Knows’ by The Beach Boys, and we walked out to Stevie Wonder ‘Signed, Sealed & Delivered’. 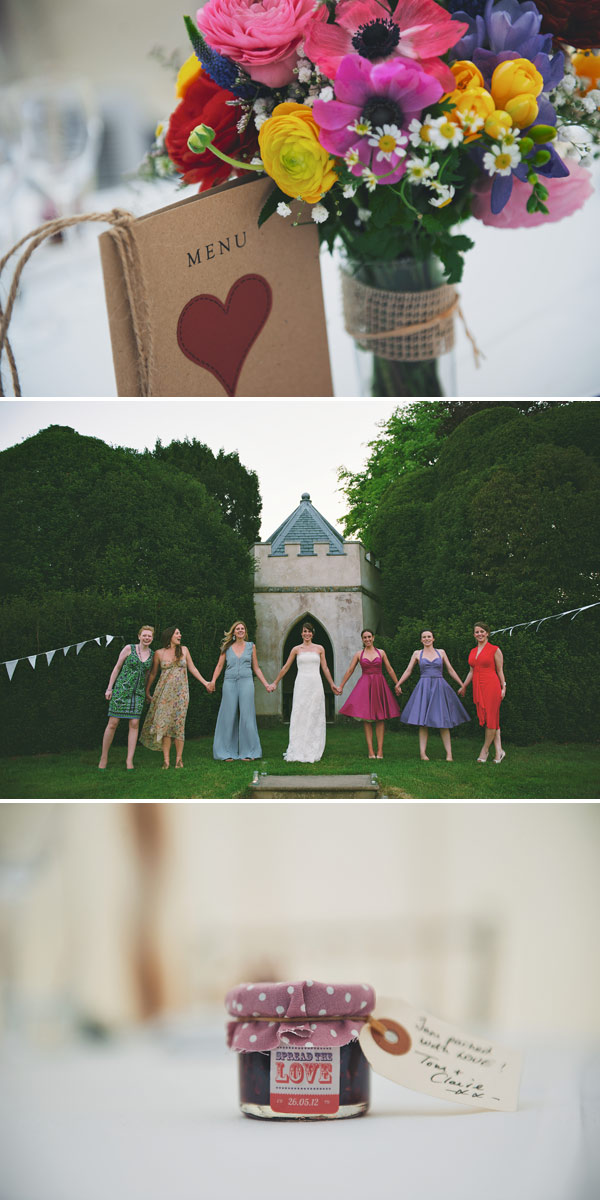 Ever since I met Tom I have told him of my dream to move out of London and start a Jam empire in the country ‘Jonesy’s Jam’, so he proposed to me in Thailand with a pot of jam that he had made with a label saying ‘Dougherty’s Jam’ with a note on the back saying that it was previously known as Jonesy’s Jam…I was confused and didn’t really understand what he was on about…but then I looked and he was on one knee with a ring in his hand! The wedding jam was my first official batch! I think I will still call it Jonesy’s Jam though…it has a better ring to it than Dougherty’s! 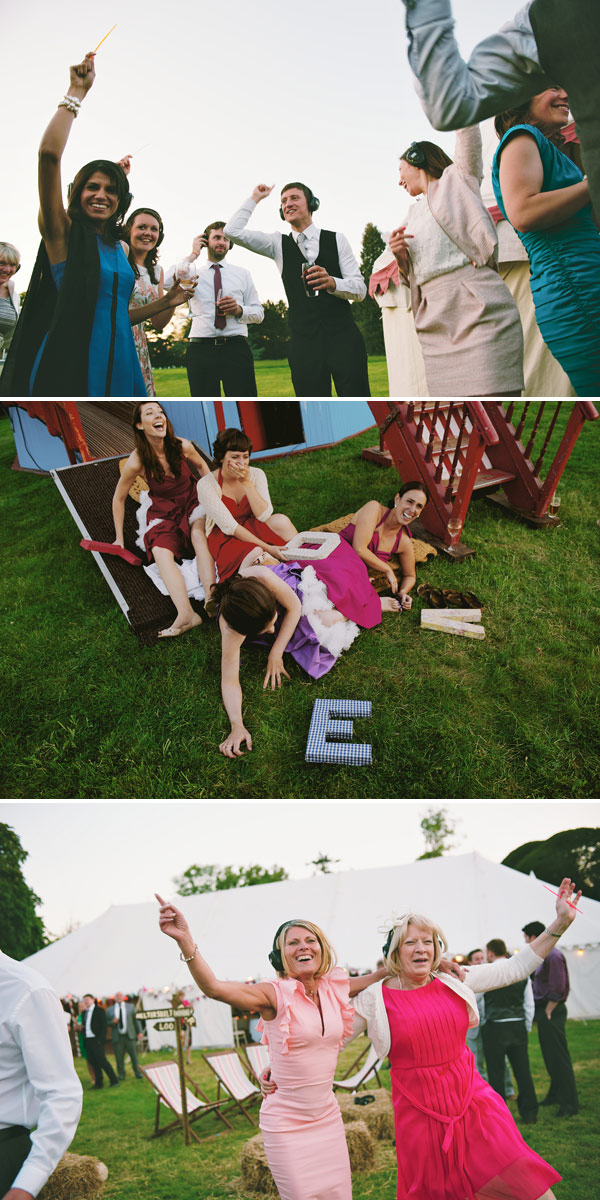 All of the handmade touches from friends, from the hair clip, to the bunting…. to the royal mail post box for cards made by our sister in law Bec – and of course all the cakes. Everyone of our guests played such a big part in our day. Don’t be afraid to ask for help, people really want to be involved…but equally remember it is your wedding so when people don’t really understand what you are doing, just keep smiling and keep going with it instead of getting in disagreements ….they will love it on the day when it all makes sense! 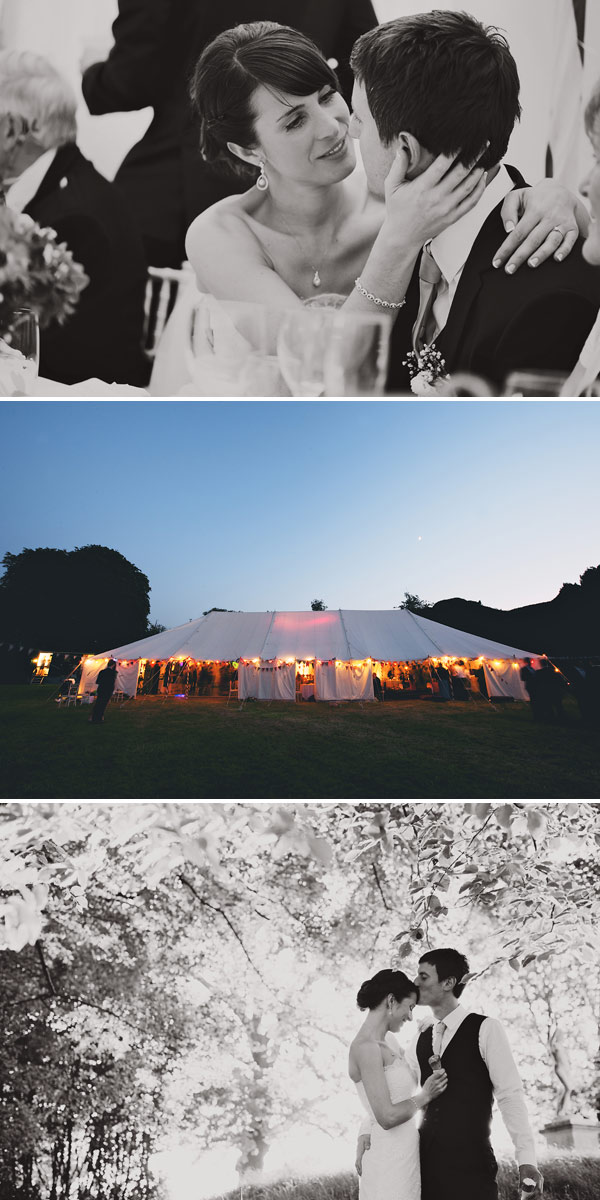 My dad looked at me like I was crazy when I said we were having flowers in wellies! I think the line he used was “yes dear”! I would also highly recommend Kelly at Boho weddings for any event like this, she really got it and knew all the right people to speak to…and then on the day just took all the pressure of us and our families to do things like light the candles when it got dark!

Did you see the video? Did you?!

I want to eat an ice-cream. And go to a silent disco. And slide down a giant helter skelter in the prettiest lace dress.

26 thoughts on “A Belter Of A Helter Skelter.”