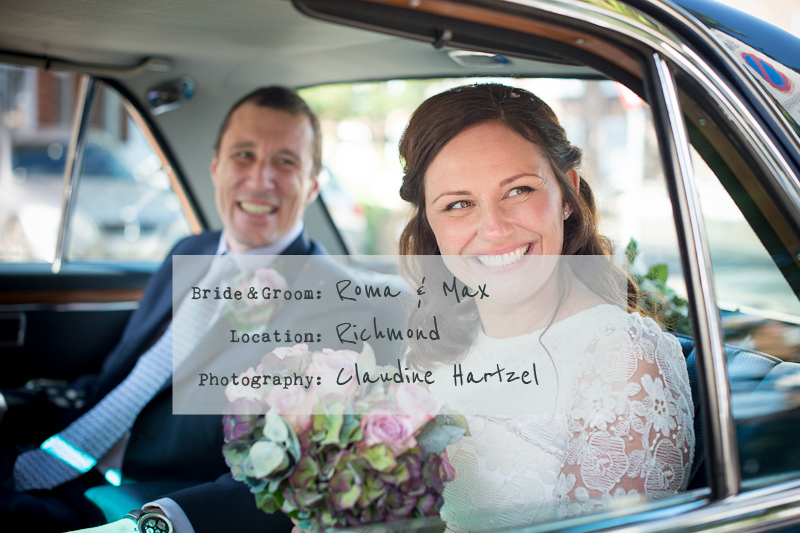 Bride Roma is just the cutest, and what amazing fashion choices – a W-day gown from Spitalfields Market that was £30 (!) and then changing into an evening gown that she had treated herself to from Matthew Williamson 9 years previously….but never worn.

You see she was waiting for a really special occasion, and what could be more special than the day you say “I Do” to your future life partner?

The venue is truly spectacular too, Petersham Nurseries in Richmond, chosen for its similarities to Roma’s family home and the locality to where Max grew up. They also do amazing food – plenty of detail about menu choices included in the text folks.

Roma The Bride:My husband lived on the Farm (which is next to Petersham nurseries) during his 20’s and has spent a lot of his life in the Richmond area so it was important for him to get married in surroundings that held a lot of nostalgia. I have always loved going to Petersham Nurseries, it is so beautiful and a very reminiscent of my family’s home, so it seemed the perfect location for both of us.

They don’t normally do weddings, so for us, it was a true honour to have the privilege indeed! 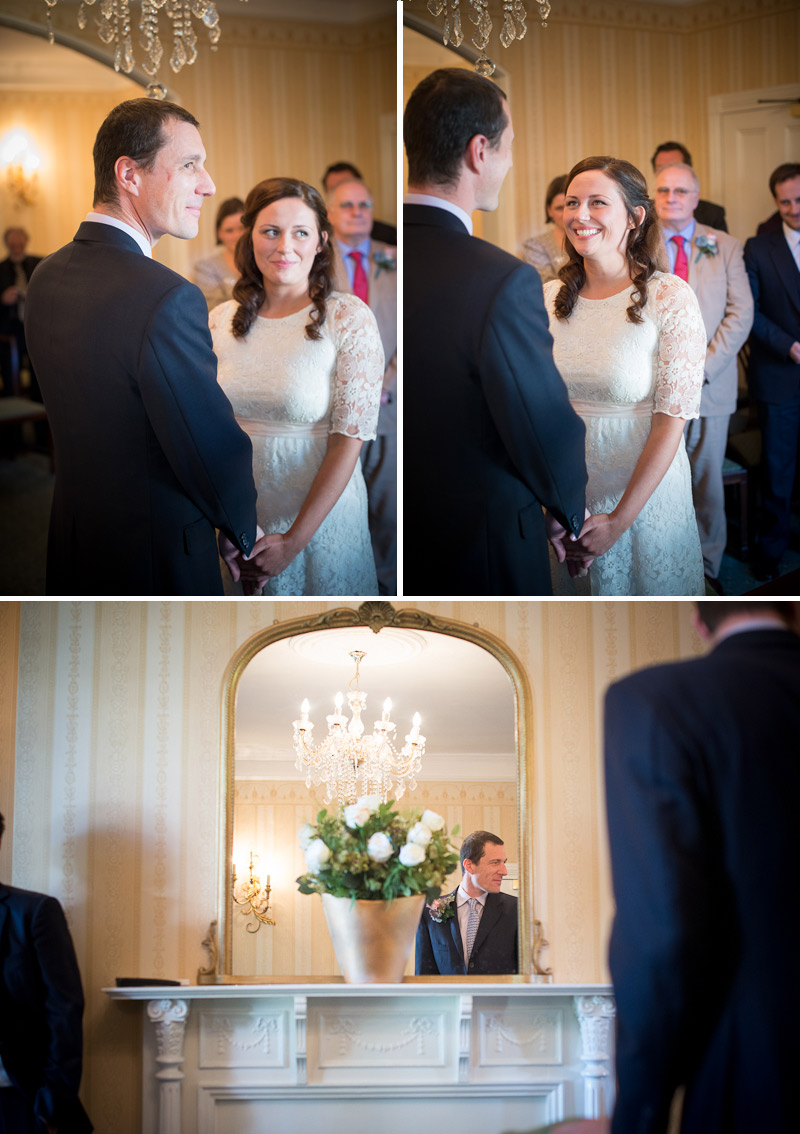 I used Diana Moar as my hair and make-up artist. Diana was introduced to me by my good friend Resh Patel, Diana looks after Daisy Lowe and Alexa Chung. I wanted to look as naturel as possible as I don’t really wear much make up on a day to day basis. I had a couple of single fake eyelashes just to fill my eyes out as I have very fine lashes, and we highlighted my cheekbones. I had my nails done in Shellac ( this also something I don’t normally do!) Nude on my fingers and a pinkish Coral on my toes, as I wanted a bit of fun!

My hair was curled, set and then pulled out slightly and fixed with a simple bohemian weave (half up half down) For perfume, I wore “Lily” by Stella McCartney which Max had recently bought as a gift for me. 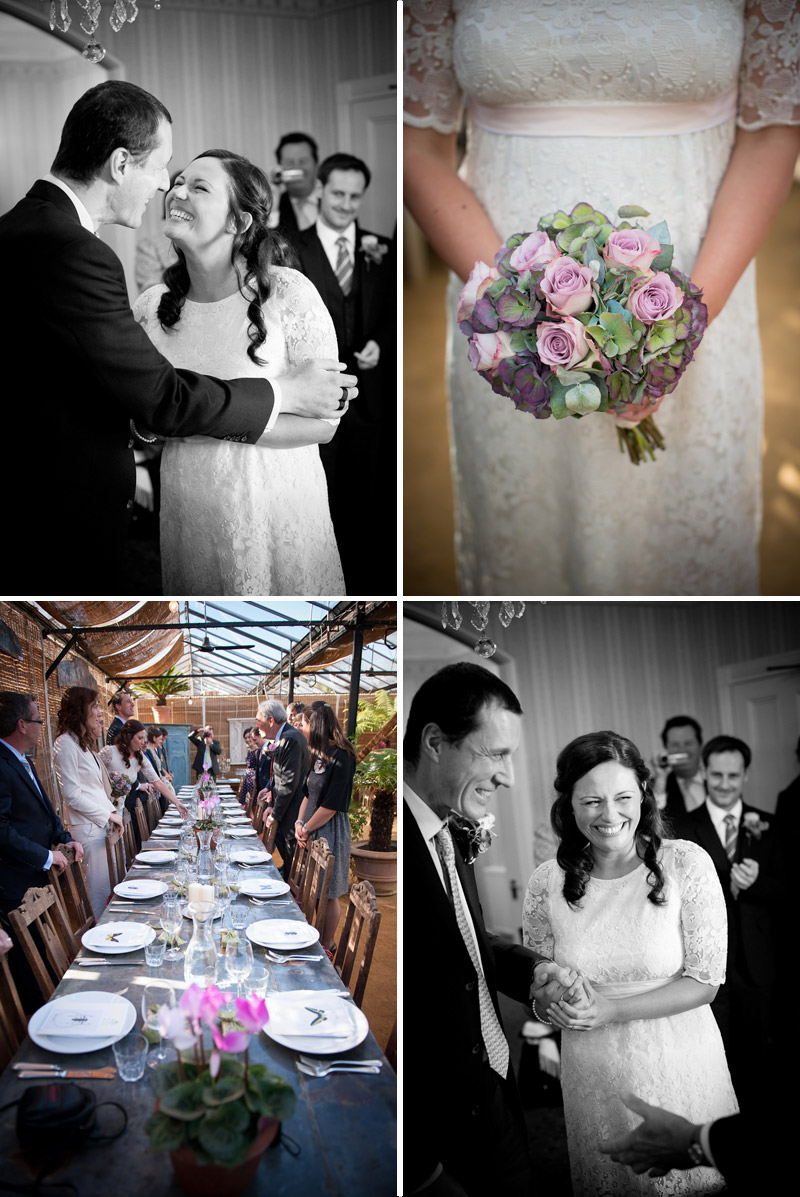 Believe it or not I bought my wedding dress less than a week before my wedding for £30 from Spitalfields Market. It was made from cream vintage lace, came down to just above the ankle, had a round neck with half thength sleeves. Designed by NAVY. I saw it as soon as I arrived, had to try it on over my clothes (due to there being no changing rooms)…….bought it and was back in the car on the way home in less than 10 minutes! Halfway through my reception dinner I changed into my Matthew Williamson cocktail dress which I bought around the time that Max and I got together. It was a treat to myself and I remember thinking when I bought it, that I would save it for a really special occasion ……..

9 years later and I still hadn’t worn it, so to wear it on this special day seemed perfect. Later that evening I adorned my vintage, light grey fur coat, nice and cosy for when the sun went down!

I loved my car! It was a Classic Mercedes 300 SEL 6.3 in Turquoise Blue, called “Cosmic Wheels”, it was originally owned by 60’s Pop icon Donavon. Our driver was so lovely, he drove us around Richmond Park for a lap of honour between the wedding and reception – such a beautiful ride!

The Most Amazing Day

I have to be honest, marriage and weddings, have never been high up on my list of things that I think are important to do. I have always believed, that when I met the person that I wanted to spend the rest of my life with, that would be enough, I never really believed in the conformity of Marriage. Max and I had been together for 7and a half years, we were engaged for just over a year and had no real date or plans to get married in the near future, however certain circumstances in August changed everything and in November we decided to get married.

Our special day was organised in 2 weeks and it definitely became more of a celebration of life to be honest more than anything else. It was really important to share this day with our family who had been so supportive over those past few months. It also marked a new beginning for us, not only new life we had been given, but for a new future, as we were relocating to Kenya in the new year. So this day was also probably the last time the whole families would be together for a while. Still to this day it was one of the most amazing days I have ever had! I look back at that day, probably every day……. And I feel so very lucky.

We didn’t have a specific theme as such however our surroundings played a major part. ….Butterflies and Beetles! there is a family tradition of mine for the love of Butterflies, my mother and her mother before her used to say at bed time “goodnight and just remember I love you all the butterflies in the world!” It was also very fitting with Petersham Nurseries, all the ladies had name cards of Butterflies and all the Men had Beetles!

The flowers provided by “The flower room” in Barnes were for the Posies and Button Holes. All other flowers at the reception provided by Petersham Nurseries.

We chose antique light pink/purple roses, sage green with purple edging hydrangeas, eucalyptus and rosemary for my posy. Button holes were one antique rose with little bit of Hydrangea and a piece of ivy at the back.

We had a non-religious ceremony at Richmond Registry office, neither of us attend church on a regular basis so it would seem strange to then have our wedding in one. We had the additional line added to our vows: “I promise to laugh with you in joy and cry with you in sorrow” My father read The Owl and The Pussycat. Our registrar was fantastic he was very funny indeed and made us all laugh a lot!

My sister in law, Christina, read a German poem which max wrote to me inside our first valentine’s day card (she read it in both German and English, beautifully) it was called “Was es ist” by Erich Fried

The food at Petersham Nuseries is always fresh and delicious, with a lot of it grown on site, our Chef was Greg Malouf, his style is middle eastern cuisine, he has a Lebanese/Australian background.

Our Wedding Cake was made by the very talented young up and coming pastry chef Louise Charlotte Bintcliffe!

We had raspberry and white chocolate cheese cake topped with a layer of strawberry and champagne jelly garnished with glazed berries. The writing was made with white chocolate. 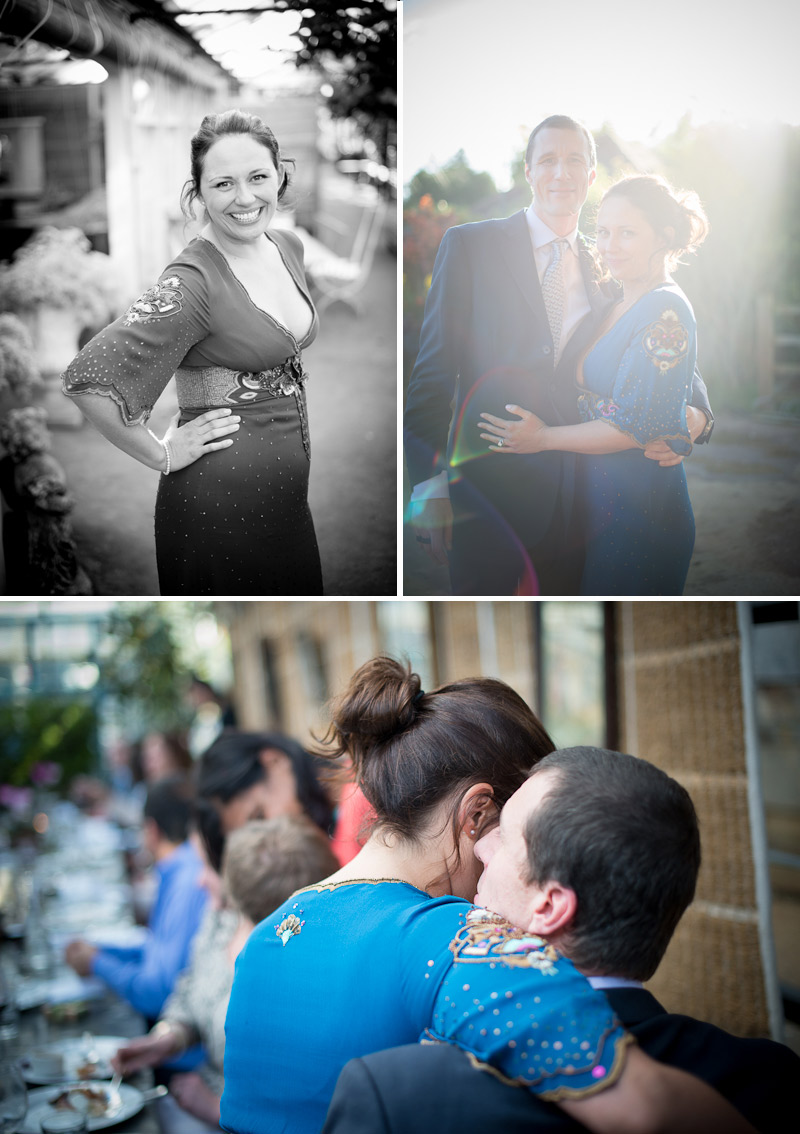 Try your best to remember every moment as the day passes in a flash! Make a point of spending a bit of quality time with everyone if you can, this day means the world to them as well, which you don’t actually realise until the day!! Laugh, be happy and smile, this is one of the best days of your life! Get a good photographer, Claudine Hartzel (my photographer) took some of the best photos I have ever seen of me and my family. I look at them every day and can still feel that day through every photo and I will cherish them forever!! Thank you Claudine.

That second from last shot?

And you know why?

Because the table is kind of trashed and Roma is giving her new husband a ruddy good bum squeeze….the sign of a damn good party and a couple that fancy the pants off each other.

And isn’t that what all weddings should be about?

14 thoughts on “A Really Special Occasion.”