Today peeps, we are off to a village fête in Wales and leading the way is Martin from My Big Day Photos.

Ok, so it’s not exactly a village fête, but that’s the look Kate and Nick decided upon when they planned their budget friendly wedding earlier in the year.

If anyone needs a lesson in how to decorate a marquee then stick around because Kate, Nick and their immediate friends and family will teach said lesson right here, right now.

…Get your note books out. 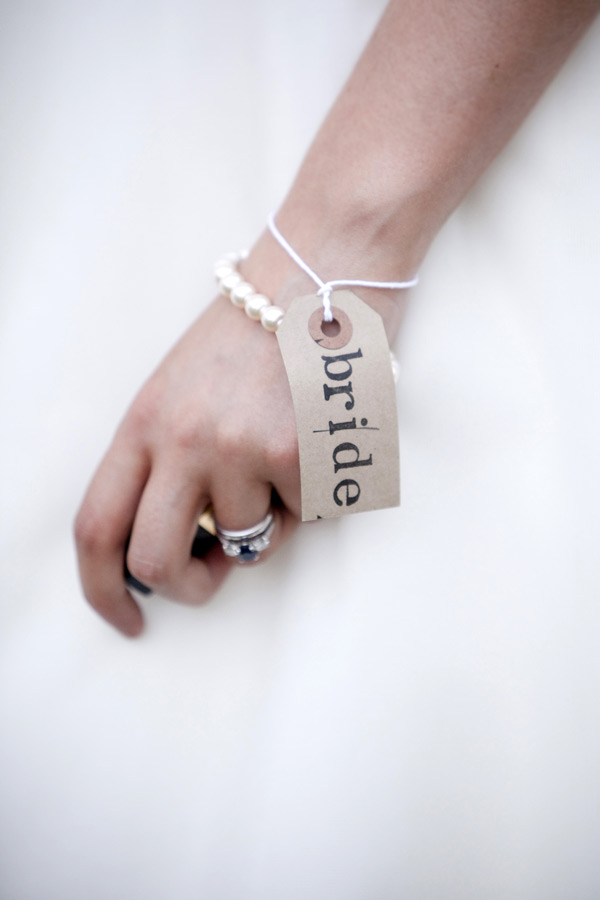 We wanted a lovely memorable wedding but without jeopardising our chances of ever getting a house deposit together, so we set about creating a pretty wedding on a budget. We had a very loose theme – whimsical, DIY, relaxed village fete – and gave ourselves a year to plan and execute.

Our wedding was on 4 June 2011 in Swansea, Wales – the ceremony was at St Benedict’s Church and the reception was in the grounds of Sketty Park which we’d recommend to any Welsh brides-to-be. We were the first people to put a marquee up in the grounds for a few years – so it was an experiment, but we thought it would be the best way of keeping the space light and modern. We hired a traditional unlined marquee which is best for when you want a blank canvas – but we paid a bit extra for posh chairs as wooden folding chairs were a step too far into budget.

For a few months beforehand we (and our families) gathered jam jars, ribbons and fabrics to get crafty for the big day which is how we added some fun touches without breaking the bank. We bought scraps of wood from garden centres to make signs, stamped luggage tags to make nameplates and used photoshop to create a DIY save the date.

The final month was manic…we spent evenings making cocktail stirrers with tiny gingham ribbon bows and designed table names after books we’d leant each other at uni (sadly leaving out our favourite which is the innapropriately named Things Fall Apart). Children’s entertainment was a croquet set, and some flags which we made that they could wave to signal the start of each section of the day (“line up”, “speeches”, “cake” and “first dance”…)

The Homage To Changing Rooms.

On the day before the wedding, we spent 10 hours decorating the marquee with a team of friends and family which became one of the highlights of the whole wedding. Screwing light bulbs into festoon lighting (hired from a theatre company for next to nothing) while hanging strings of home-made bunting with a can of beer in one hand was a convivial way for lots of people to meet.

The dads filled jam jars with Swansea sand, topped with a tea light and tied with coloured ribbons as pretty candle-holders. And the mums wrote the Welsh menu on oversize blackboards (also hired from a local school) and made some floral-print and gingham table runners to add a bit of colour. We used our handmade signs to make a trail from the church to the marquee – this saved us a lot of money on coaches but also enforced on everyone a charming walk through a Swansea park which was rewarded with our hand-mixed peach bellinis on arrival (using fresh peach puree – a bargain!)

The Florals and Photos.

Our flowers were the prettiest bit of the whole day! Our extremely talented friend Clare Emburey from Achillea Flowers put together lots of small but beautifully vibrant and pretty bouquets in vintage crystal vases. She has her own shop now in Hampstead and helped us so much by driving down from Covent Garden Flower Market the day before the wedding to get everything ready. We also had a fantastic photographer in Martin from My Big Day Photos who met us twice beforehand to go through the key snaps we wanted and to chat about styles – we wanted something natural that captured lots of our mums, and made the day look as sunny and lively as possible.

The dress was bought second-hand, but luckily never actually worn, from Pre Loved and is a Justin Alexander tea dress design which a seamstress changed to remove some of the diamante bling and make more simple and elegant. It felt youthful and fun and fitted the shabby chic venue where a long dress would have been obstructive and too formal.

The Pearls And Bows.

The veil was handmade by the groom’s mum using Liberty silk – it covered the shoulders in Church. Later it came off and I had pink roses pinned in my hair. I wore pearl jewellery (a last minute Debenhams purchase) and some Kurt Geiger high heels with big silky bows.

The Groomsmen And Gals.

I did the make-up myself after a lesson from the Chanel counter. The groom looked nice in his three-piece suit made for the day from King and Allen with Church shoes and a knitted polka dot tie. The groomsmen all wore navy three piece lounge suits hired locally with matching ties, handkerchiefs and buttonholes. Bridesmaids looked hot but chic in Coast lace shift dresses in the palest pink and some pink flowers in their up-dos.

The groom’s mum made a huge number of white chocolate ganache and raspberry cupcakes which looked ace on vintage cakestands (borrowed from friends), and the bride and groom cut a giant cupcake using the family sword to much aplomb. We didn’t have favours because everyone was encouraged to take home a cupcake or some of the bridesmaid’s homemade chocolate brownies, but lots of people did take their luggage tag nameplate as a souvenir.

The Step Too Far.

Proving that you can go too far when “personalising” your day – the drinks stirrers we made seemed like a sweet idea, but they really annoyed everyone by popping out of glasses of prosecco and up peoples noses! The rest of the day’s food was Welsh-themed which was hilarious for all our friends and family who were new to Welsh cakes. Instead of the usual round tables and a top table we had four rows of trestle tables which made family politics easier and meant that the meal had a relaxed, communal feel.

The first dance was I Only Want To Be With You by Dusty Springfield and after that entertainment was kept very simple as we wanted the night to have more of a boozy, party in the country feel! We had a table of unlimited wine, beers and local cider and a local DJ with a meticulously pre-vetted songlist compiled by the groom and best men. There were some deviations but all the key songs were there (and no I Would Walk 500 Miles…) The night ended with everyone forming a tunnel of sparkers out of the marquee.

Overall, my advice would be to prioritise, choose to spend time on the things that really matter and make sure you take help when its offered – when you’ve got a large empty marquee there is no such thing as too much craft and we are forever indebted to the family members who fetched and carried and made bunting and cakes. It makes the day so much more enjoyable when lots of people have been a part of it. Deciding to have bunting and top flowers made such a difference to how the whole marquee looked. Don’t scrimp on food and good wine – it’s the bit that everyone remembers, and make sure you get lots of amateur photographers snapping away to capture the little and hilarious things that happen during the day.

Im sure you’ve all come across “The Wedding Mark-up”. It’s the phenomenon of things suddenly being more expensive simply becasue they are for a wedding. If you can think laterally and get your wedding related items from a non-wedding vendor ( like Kate and Nick hiring their lighting from a local theatre company, rather than a specailist wedding hire company) then you can save a fortune.

Adam likes Pina Coladas and getting caught in the rain.
Tags:Justin Alexander

31 thoughts on “A Whimsical Welsh Wedding.”