Jo and Andrew married in July at How Caple Church and a reception followed at How Caple Court. Andrew is known as JW which is a military nickname.

Get ready for uniforms, ice cream carts, crazy dancing, flowergirls a perfect Augusta Jones accessorised with Jenny Packham and above everything else, a cracking good party.

Photography today is by Chris Barber. 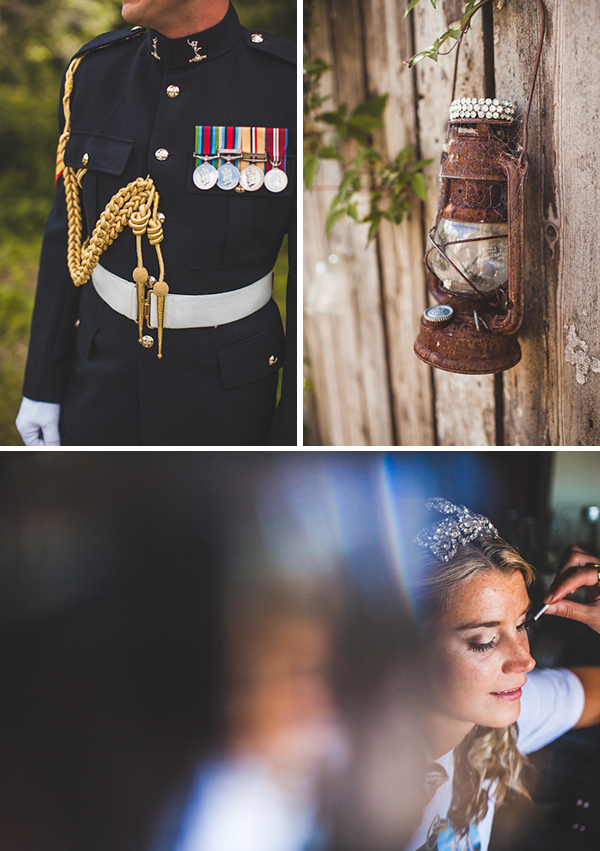 My dress was from Perfections in Worcester. They were very helpful and I didn’t feel rushed choosing my dress. I didn’t really want a ‘big’ dress and I had originally come to the shop to look through their Jenny Packham dresses. They were beautiful but when I tried on ‘Tish’ by Augusta Jones my mum gasped and my very philosophical sister said, “If I was going to design a dress for you it would be that one”. I value her opinion on clothes and style more than anyone else in the world so I was sold! I felt it was elegant and not too showy but the train made it formal enough for church. 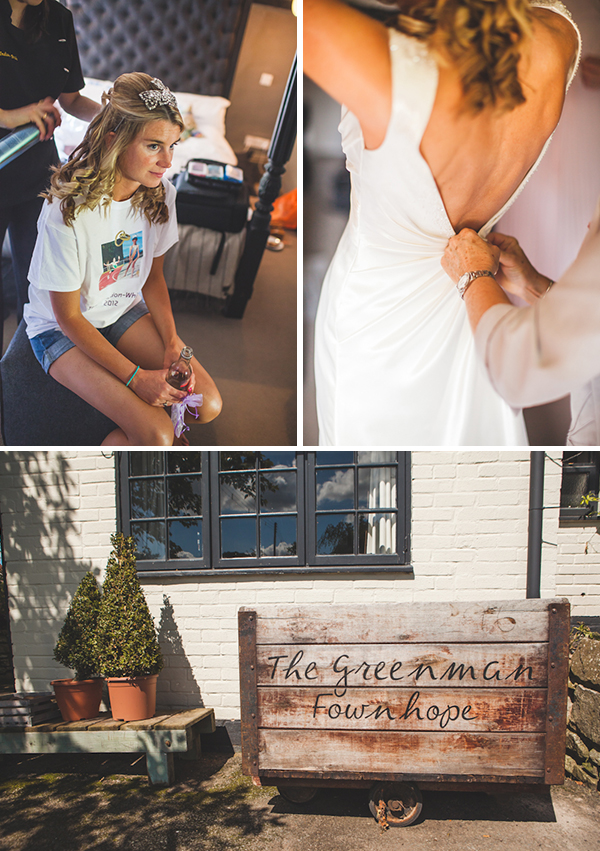 I had my sister’s veil from Dragonfly in Cheltenham as my something borrowed. I hired the Jenny Packham Accacia III when I fell in love with it in a magazine. It was very sparkly and lifted my simple dress (plus I’m like a magpie, drawn to sparkly things!) but it was too expensive for me to buy. However, I found that Elegant Wedding Creations allowed you to hire head pieces and jewellery. It was an excellent, efficient service that allowed me to wear something that I felt was really beautiful, but usually out of my price range!

I bought my bracelet to match the headpiece from Notonthehighstreet.com, the designer was called ‘Anusha’. Andrew made me cry on the morning of the wedding by sending me an extremely beautiful Tiffany necklace I had spotted in Birmingham months prior to our big day. 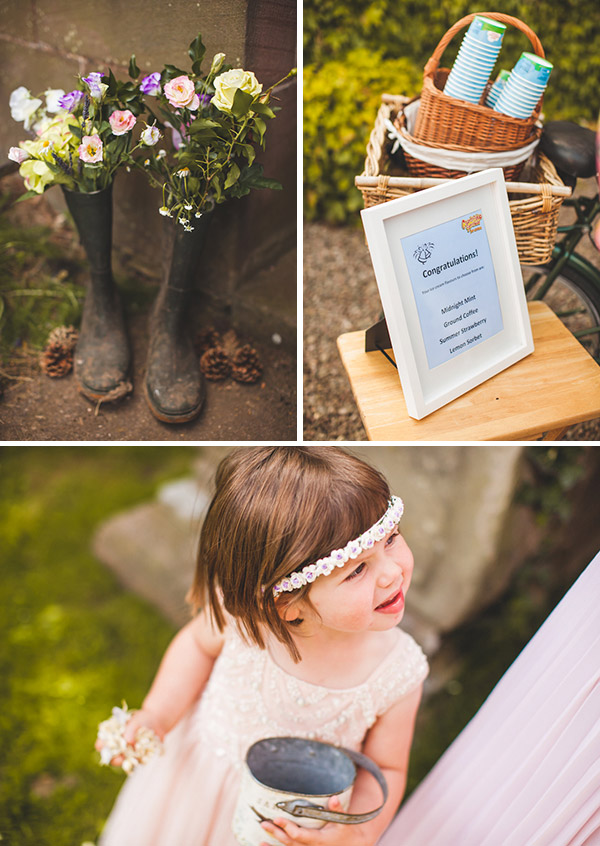 The shoes were from Dune and were, again, sparkly! I liked the peep toe style and the silver colour matched all my other accessories. 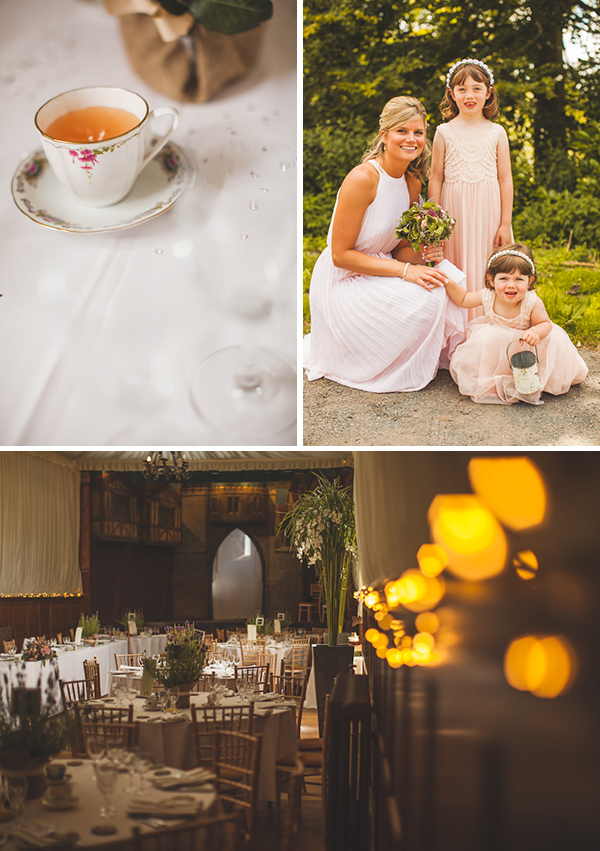 I used the agency ‘Beauty Call‘. Parminder came and did a hair and make up trial about two months before the wedding and then arrived at the hotel in the morning to do my hair and make up and my bridesmaid’s hair. She used mac make up and I wanted my hair down without too much ‘poof!’

The florist was called Sandra and her shop is called Ross Flowerhouse. I don’t know the area that well and visited several florists. Sandra was so enthusiastic and helpful when I was trying to explain the type of English Garden party look I wanted. I knew I was going to do my own lavender centre pieces covered in hessian and wrapped with a ribbon so I wanted the flowers to work alongside this. I wanted soft lilacs and pinks. She helped me pick ‘Memory Lane’ rose and worked some pale pink spray roses and ivy, and a touch of astrantia. I used this rose to attach to my lavender pots. The flowers in my bouquet also made up the flowers in the church and the top table centre piece. I bought my own wheat and lavender from Shropshire Petals and tied them with strings of pearls to the pew ends. My bridesmaid’s bouquet was green hydrangea with the spray roses and astrantia and the button holes were fresh lavender and the green hydrangea. The flower girls had little pretty buckets filed with natural petals to throw and I used sweet peas and hydrangea from my garden and my mum and dad’s garden in welly boots and pots to decorate the outside of the church

The best men were Andrew’s brother, Joe and his best friend, Matt. They had navy blue suits to match the uniform from Marks and Spencer. We bought them a tie and white shirt from Thomas Pink in Birmingham as their present. The staff there were so helpful and wrapped it all beautifully for us as well as demonstrating to Andrew how to tie a tie properly! My sister Jenny was bridesmaid and after two dresses, that just didn’t endup right, she ended up wearing a Ted Baker pale pink, floor length dress. 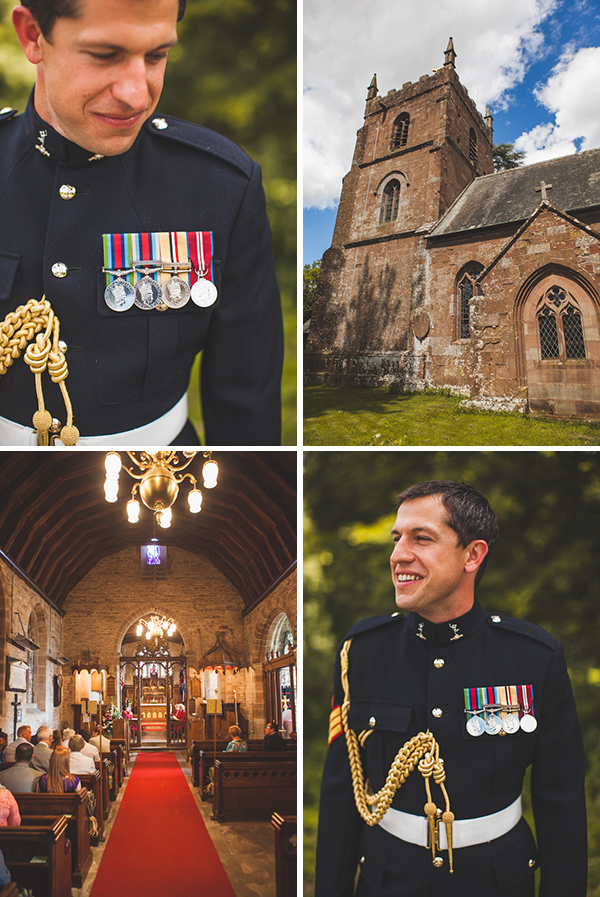 The flower girls were in pale pink dresses to match the roses too. They were from monsoon as were their little pearly shoes! The one little one had to stuff hers with tissue paper as we thought her feet may grow – she was very good and didn’t complain about it but later sneaked off with her mum and cam back in Peppa Pig slippers! They were pink and still matched perfectly!! 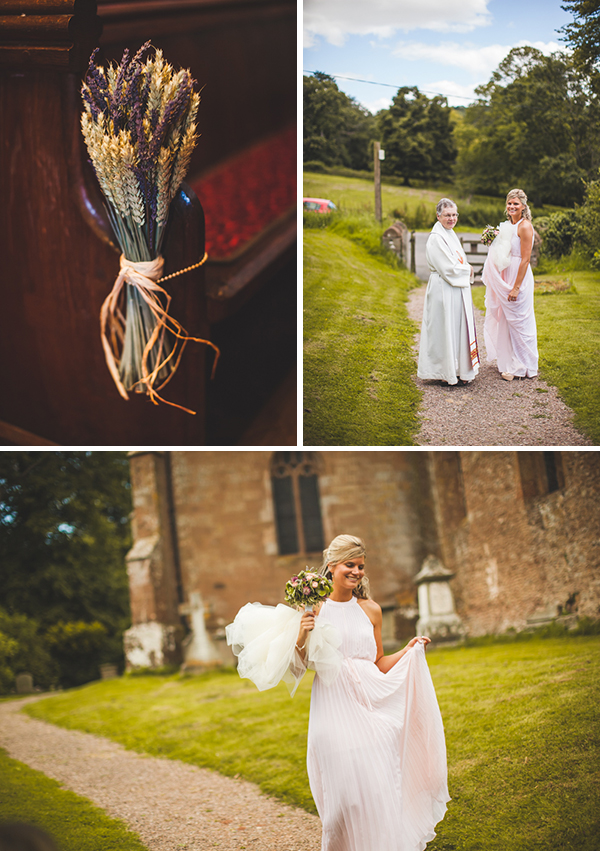 The groom was in uniform that was partly his and partly borrowed. He had to wear long johns underneath as the material is so itchy – as you can imagine he had a bit of a sweat on in July! His belt has been worn by several other Army guys now for their weddings and they are talking about all signing it and framing it!

Our Photographer Chris Barber was absolutely brilliant! We got a lot from the initial meet and then the later engagement shoot. He put us at ease at the shoot and made us felt like we were just having a nice stroll (even though the canal and trading estate were perhaps not so beautiful!). Andrew, who is a five year old trapped in a 31 year olds body (!), loved playing the games and telling the stories that Chris used to get us to relax. 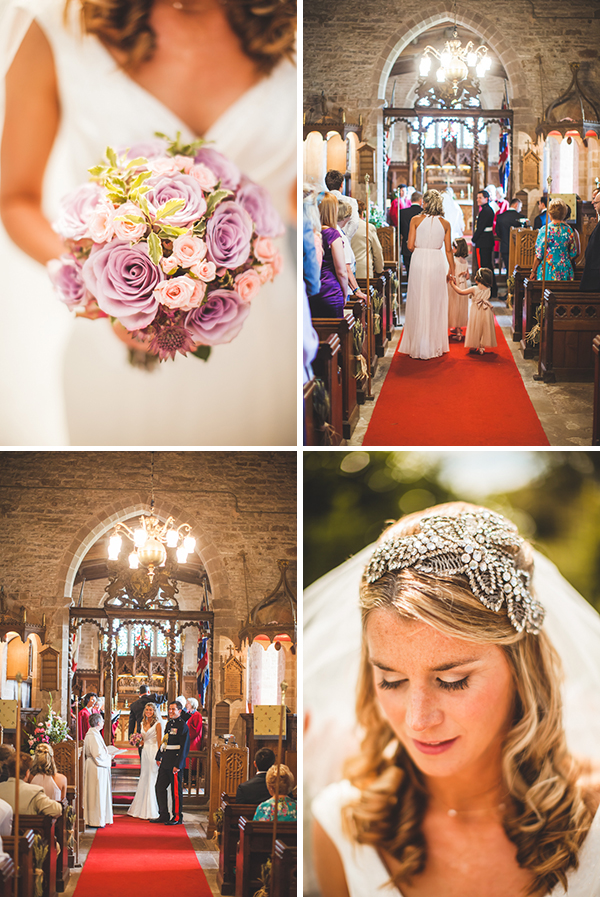 When I felt poorly on the morning of the wedding both photographers made me feel at ease and just got on with it without asking me lots of questions. They even made me look ok when I was feeling particularly green at that moment! They completely captured the day and really listened to what we had wanted. 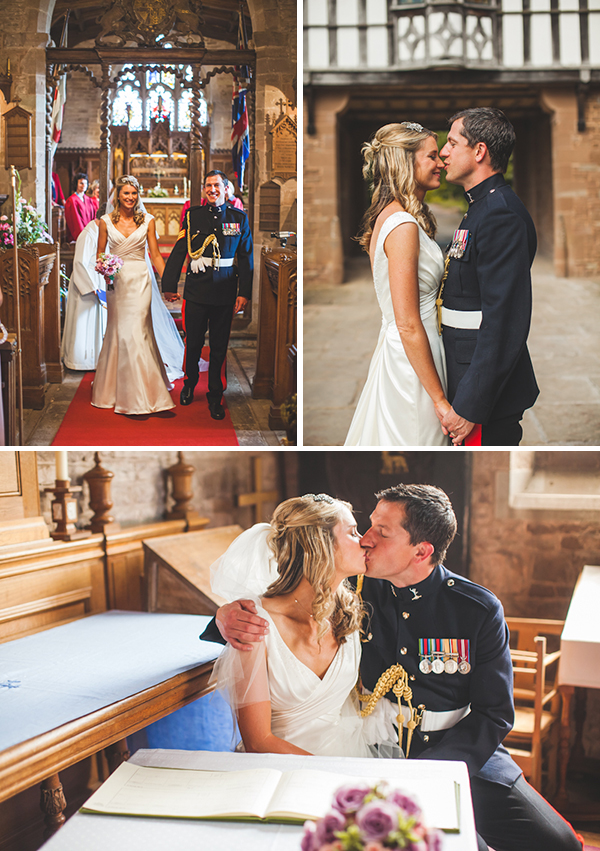 The cake was from The Cheese Company in Cheltenham. Andrew is a massive cheese fan so we went and tasted and chose three tiers, plus heart shaped cheese, to make our cheese cake. I found a lady in Canada who made wedding toppers from felt and ordered bride and groom mice to go on the top of the cake. My dad bought port to be served with the cheese; a must when serving Army blokes!

We searched high and low for a good band and I came across the agency Act Sharp. Koser was really helpful and sent us several samples from different bands. We chose ‘The Last Action Heroes‘ in the end and it worked really well as there was a stage that used to be used for village shows that the band were able to perform on.

They were brilliant and didn’t miss a beat when Andrew decided to carry me on stage during our first dance! They got the crowd dancing but were laid back and didn’t stress when our timings went a bit awry. 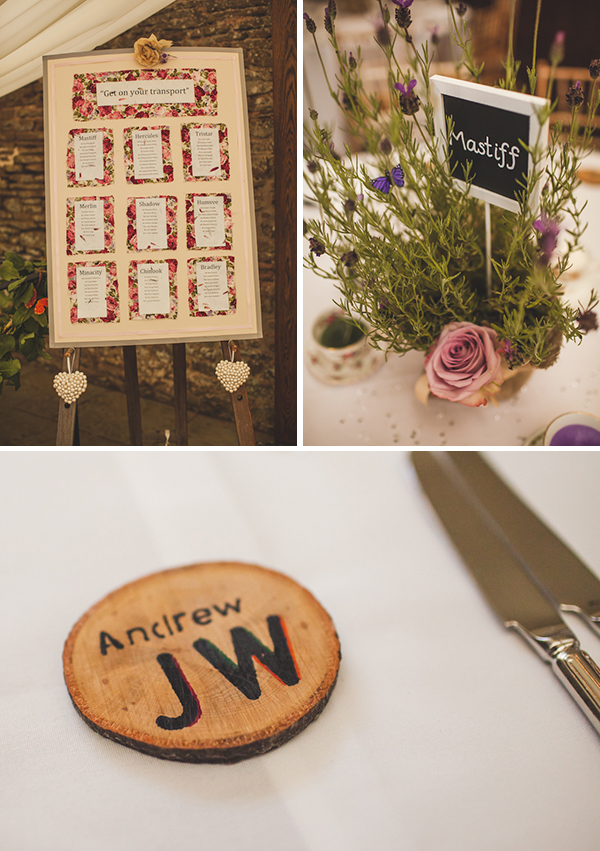 We are both big Biffy Clyro fans and when we heard their cover of Rihanna’s Umbrella on Radio 1’s live lounge we knew it was a perfect first dance. The words mean a lot to me particularly and it’s a lovely chilled song. The band learned Calvin Harris ‘Feel so Close’ and went straight into that after the first dance to get the crowd going.

We wanted to do something for charities that are important to us so the boys had ‘Help for Heroes’ bands and the women had Alzheimer’s Society pin badges (my Grandad died from the disease a couple of years ago).

I hired bunting from Bunting Queen to add my colours to the marquee and found very real looking butterflies on a link from the Martha Stewart website. I used both of these as well as lavender to bring my colours into the marquee (separate from the breakfast room). I kept my English Summer theme going with ice cream served outside from a trike by Churchfield’s. They were great and I think the kids, and me, went back for seconds. I used tea cups I had collected from second hand shops, and my Grandad had collected for me, and Andrew ordered wax and made them into candles. We put three on each table. Our friend is also a tree surgeon so he gave us discs of wood to put people’s names on as name places. The venue was beautiful anyway and I really liked how you can put your own stamp on it. They gave us lots of advice on caterers, our hog roast etc too. 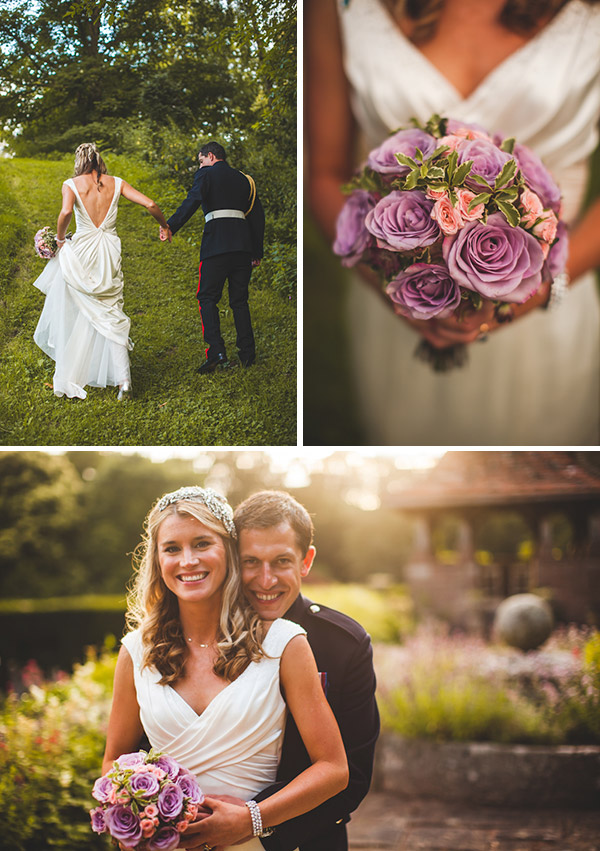 Don’t listen too much to other people as you can start questioning what you actually want. Make it a day that will make you happy.

How much fun does this look? The perfect balance between fun and a sense of occassion, tradition and contemporary touches has been struck by Jo and JW.

Congratulation guys – it looked like a tip top shindig.

8 thoughts on “An English Country Garden.”