This post is one that is particularly close to my heart given that I had both my makeup trial and my engagement shoot on Monday this week.

Suffice to say they both went swimmingly and I’m thrilled with the results. Mostly because I have a genius makeup artist – one of those precious few people that actually listens to what you want and then goes and produces something ten times more wonderful and a magician for a photographer – more on her later.

Like many of you, I’ve spent the past few weeks scouring the internet for THE look. The face that you’re going to wear on perhaps the biggest day of your life so far. It needs to survive tears, wow your beloved, stand the test of time and make you look like the most beautiful bride that ever existed.

Ok that last bit is a step too far, but you know what I mean…

So I thought it was only fair to share my findings with you gorgeous lot. As ever at RMW Towers, we’re super nosy and want to know all about your bridal look. 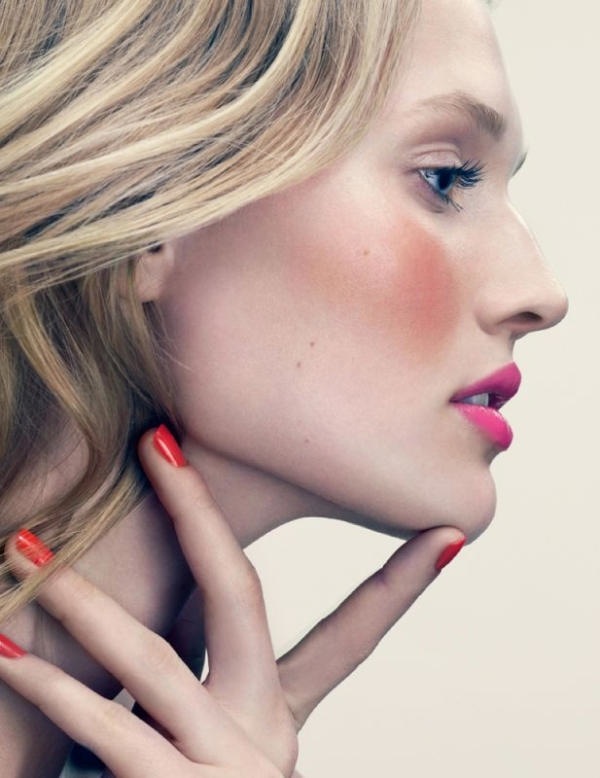 Lastly, I’d definitely recommend that all brides to be have their trial and shoot on the same day if at all possible. This way you can see exactly how your makeup appears in the photos before the big day giving you the chance to provide vital feedback to your makeup artist.

It’s almost like experiencing the beauty of hindsight without any unnecessary regrets.

One of THE most flattering bridal looks for all skin tones is the metallic eye. Glamorous, sexy and downright flipping gorgeous, I don’t think I’ve ever seen a bad photo of a bride who has chosen to sport iridescent peepers.

But the thing I love most about this look however is its versatility. Perfect for day and night, this look can be interpreted in a myriad of ways. More daring brides can choose full on smokey, come-to-bed eyes whereas those looking for something softer can opt for a subtler, sparkly look.

Smokey smudged out eyes look fantastic on darker skin tones (I like to call it greasepaint glam) and hint at film noir beauty, whereas a palette of softer golds and shimmering silvers suits those with lighter complexions.

For lighter golden eyes, I’d recommend sweeping lighter shades across the lid and taking darker tones up to the brow-line. Finish off the look with a dusting of lighter pigments in the inner corners of the eyes as this makes the eyes appear larger.

The key to a really successful metallic eye though is to keep the rest of the face as neutral as possible. Any more than the barest whisper of foundation can result in this look appearing too ‘done’. Finishing it all off with a dash of nude gloss and some mile-long lashes will ensure that you float through the day seamlessly from aisle to dancefloor.

I mean I really love freckles. I love them so much that when I was younger I used to draw them on and wish every single night that I’d wake up and find my face bespeckled with them.

It never happened though. Instead I ended up with a gorgeous sweetheart who breaks out in a smattering of brown dots whenever he looks at the sun.

So when I saw the image of the woman in the middle of this clutch of inspiration, I was compelled to include the fresh-faced trend in this post for you lovelies.

This look is all about dewy, sun-splashed cheeks with the rest of the face almost bereft of makeup.

I ADORE it with a cherry on top.

For those of you concerned that you might appear a little…well…bare, fear not. You can up the ante on this look by adding clusters of feathery doll-like lashes and sheer, petal pink lips.

Adding reflective washes of light golds and silvers to the brow bones and eyelids is also the perfect way to capture that carefree glow so it almost seems as if you’re shining from within.

I fell head over heels in love with a bold lip right here on these polka dotted pages at this New Zealand wedding. The gorgeous bride not only sported the most amazing topknot but also rocked the most striking scarlet smile I have ever seen at a wedding.

And so I fell for the bold lip…hook, line and sinker.

Technically the matte fuschia lip shouldn’t really work with the flame-haired locks of that beautiful woman at the top of this board. Oh but it does, doesn’t it. It so definitely does work.

And… take a look at her eyes. They just pop against the colouring of her mouth – so much so that she doesn’t really need other makeup on her face.

Like with the Metallic Eye, it’s best to keep the rest of the face neutral when wearing the statement lip. By all means, apply a lick of mascara but really it’s your pout that should be the talking point.

This look is perfect for the modern bride in a contemporary city setting; for me it just screams luxe and grown-up glamour. This particular style of makeup can be high maintenance however, as it’s important that you keep the colour topped up for maximum impact.

If you’re thinking of choosing this makeup style for your big day, it might be worth designating one of your maids with the honour of ‘Lippy Monitor’ to ensure that you’re always picture perfect.

Who else loves the feline beauty of a lined, flicked eye?

I love it so much that I wear it almost everyday. But it seems I’m not the only one given the selection of wilful arches below.

Striking and feminine, a perfectly lined eye has been known to make a man go weak at the knees. If a woman can’t sport one on her wedding day then when frankly can she?

Modern cat-eyes play with the traditional forms of the familiar flick. Bottom lashes can be left mascara and liner free for a less intense feel or darkened and shaped with more dramatic arches for added impact. Other variations include the application of two layers of liner in slightly different shapes on the same eye for further intrigue.

I also love a bold brow paired with this look as it helps to frame the face and ground the eye.

Be sure to use a budge-proof liner for your big day as this style looks its best when the flick is crisp, solid and defined.

I have to make a confession…

I am a seasoned nailbiter.

We’re not talking about a quick nibble here and there, we’re talking hardcore. In fact I can’t ever remember a time when I haven’t bitten them right down, almost to the quick.

I’m a little bit worried therefore about the whole ‘let me hold the bouquet whilst you also capture my sparkly rings’ shot – my nails aren’t really going to be up to the mark. So I am going to have to try really hard not to bite them over the next three months (she says as she chomps on the nail of her index finger).

So in a manner of speaking this moodboard is one part superfluous, one part wistful and one part wishlist.

I love the transience of nail polish – its impermanence is part of its appeal. A woman can change her nail colour as often as she can change her handbag, shoes or… hell…even her pants.

It really is the most perfect way to finish an outfit and it doesn’t have to break the bank either.

Here at RMW HQ we’ve noticed that brides are currently crushing on iridescent fingertips for a more contemporary look. We’re talking full on metallic gloss, sci-fi style, to neutral backgrounds with glitz overlaid on the top for a more subtle effect.

I particularly love the shiny pastel rainbow nails in this moodboard – perfect for those maids who want to rock something a little bit different on their fingertips.

And I want to hear from those girls thinking of sporting a half-moon manicure on their wedding day or even if you’ve had one in the past – what did you think? Was it beautifully unique or did folks think that you’d missed a bit when you’d painted your nails?

Are you a Metallic Eye maiden or a Bold Lip lovely?

Perhaps you’re taking the Fresh Faced approach for that sense of natural glamour?

And please share your recommendations for the best red lippy out there – I’m currently a fan of MAC’s Ruby Woo but I’m not sure if it’s a little too orange on me. Do you know what I mean?

As ever gorgeous people, let us know in the comments box below.