This is the wedding of Emma and Oli…and it will make your actual day.

So much colour, so many laughs, so much joy. Like a cloudless blue sky filled with sunshine.

And Oli may have organised the most romantic proposal ever, seriously, he emailed me this:

“I designed a ring out of rare things I got from all over the world, like 40 million year old swamp wood, and a mamouths tooth and a meteorite found in America. I then hired a helicopter that I told her was a gift from friends, and flew her over a giant sign that said marry me!”

Yes. A ring made out of a meteorite people.

And I’ve included some images just so you can see how unbelievably awesome the whole thing was.

All of the wedding picture pretty (second template onwards) is courtesy of the ace Mister Phill.

We were married at St Peter’s Church, Wellesbourne with our reception held in Tee pees by a lake nearby on private property. The Tee Pees were our big extravagance – we loved them from as soon as we saw them online but it took a while to commit as we had over 150 guests which meant up to 4 tee pees which don’t come cheap! 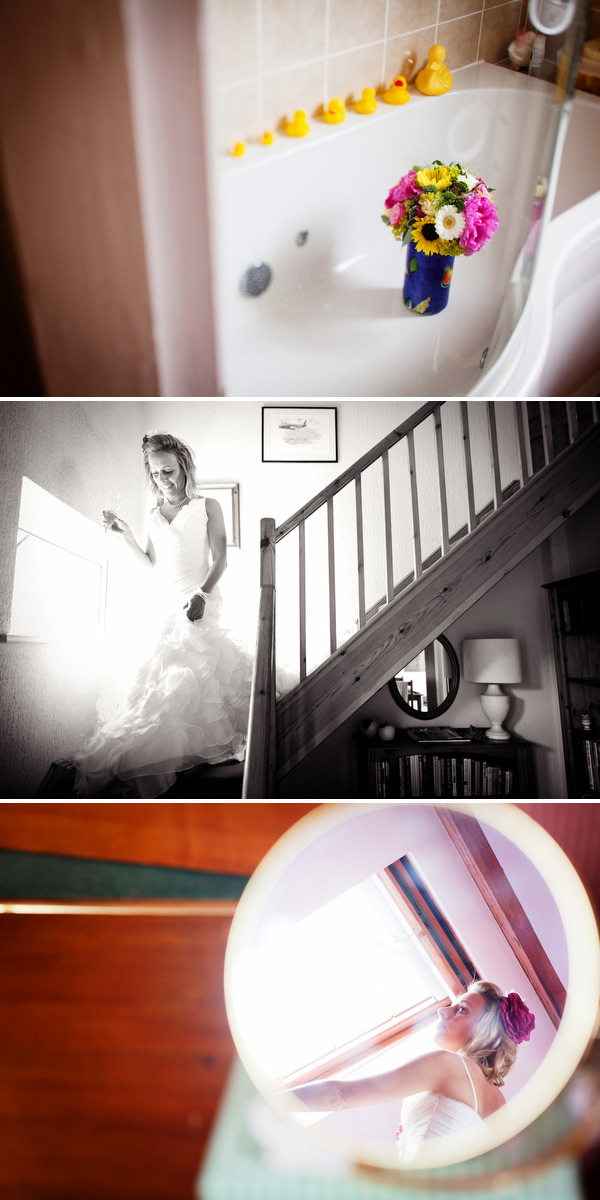 My dress was by Pronovias – called Galante. I am actually selling it now if anyone is interested!

After getting engaged I watched my first episode of ‘Don’t tell the bride’ and a few weeks later I went for my first visit to a dress shop to see what was on offer. The first dress she got out was the one I’d seen on… Don’t tell the bride. I continued looking but my heart was always on that one so it must have been fate! I knew I wanted something fitted – I’m quite petite so didn’t want to be swamped. 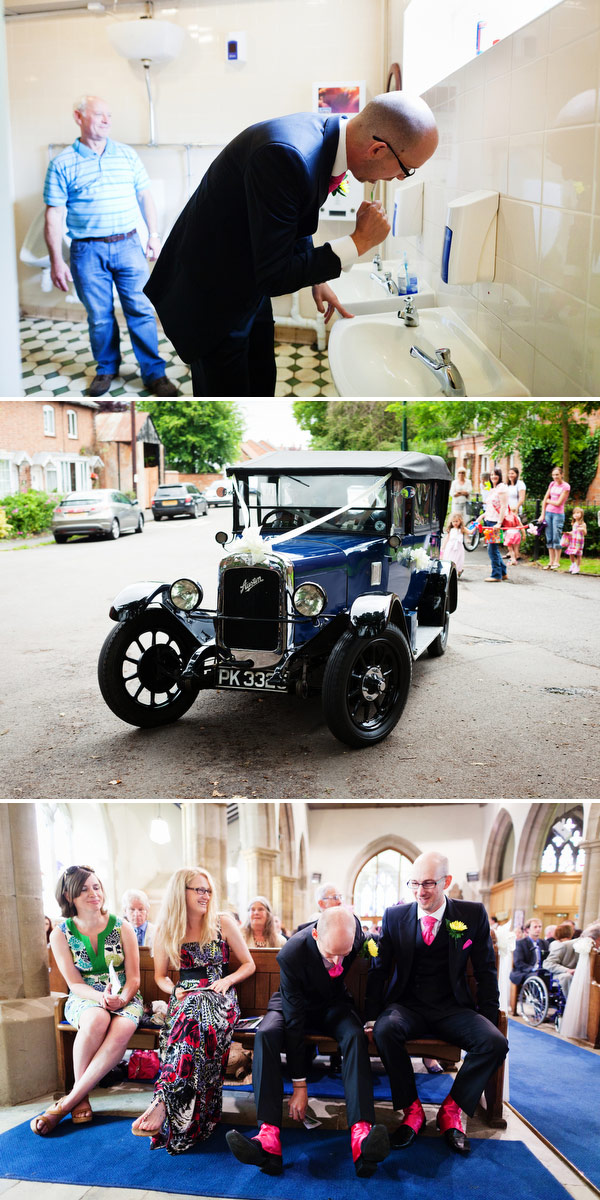 I wore a big flower in my hair. I’m not really a girly girl so tiara’s were out of the question! I went to Primark and shops like Monsoon and bought a collection. My hairdresser played around with how they would look and did a great job. I didn’t go for a veil either – I didn’t see the point when I knew I’d take it off as soon as we left church – I preferred to spend my budget on other things! I wore a pearl necklace that used to belong to my gran and found a cheapish bracelet to match in Debenhams. 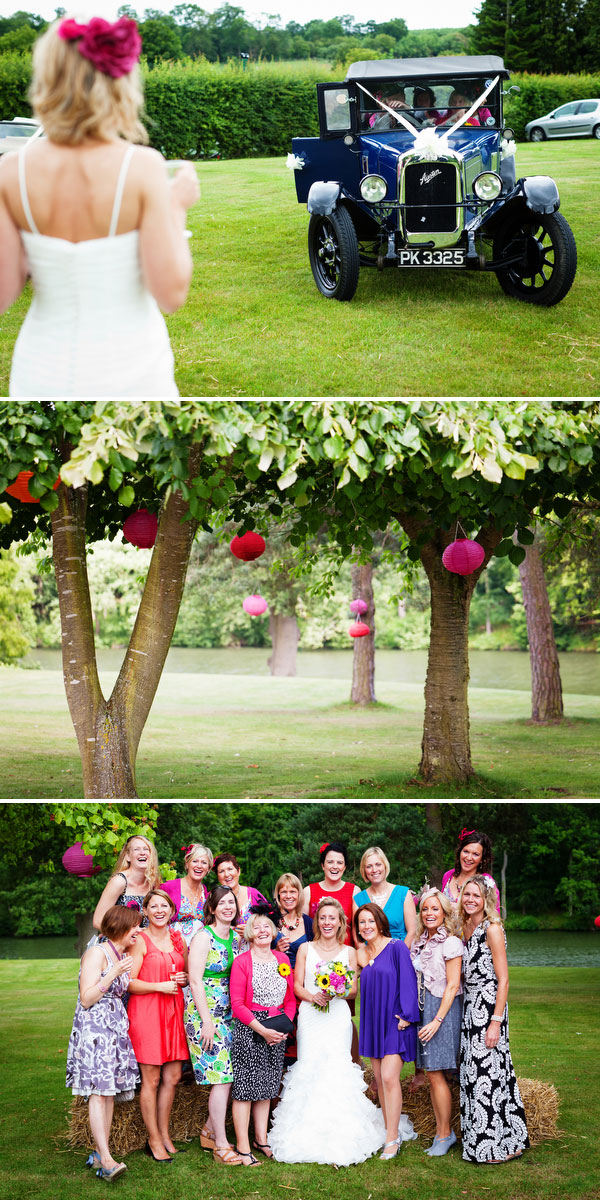 I rarely wear makeup so this was a big concern for me. A friend told me about Bare Escentuals make up so I went to their store in Covent Garden and they did a make over for me. I love their products now and probably ‘do my face’ once a week which is a step change for me! I have really sensitive skin and their products are excellent.

I chose hot pink lipstick (to match our colour scheme) and the rest of my make up was fairly muted but I think my skin looked great. The local village hairdresser did my hair. As I’ve lived in London for 11 years I hadn’t used the hairdresser since I was at school but the lady I had was so creative and daring with the styles she tried which is what I was after. 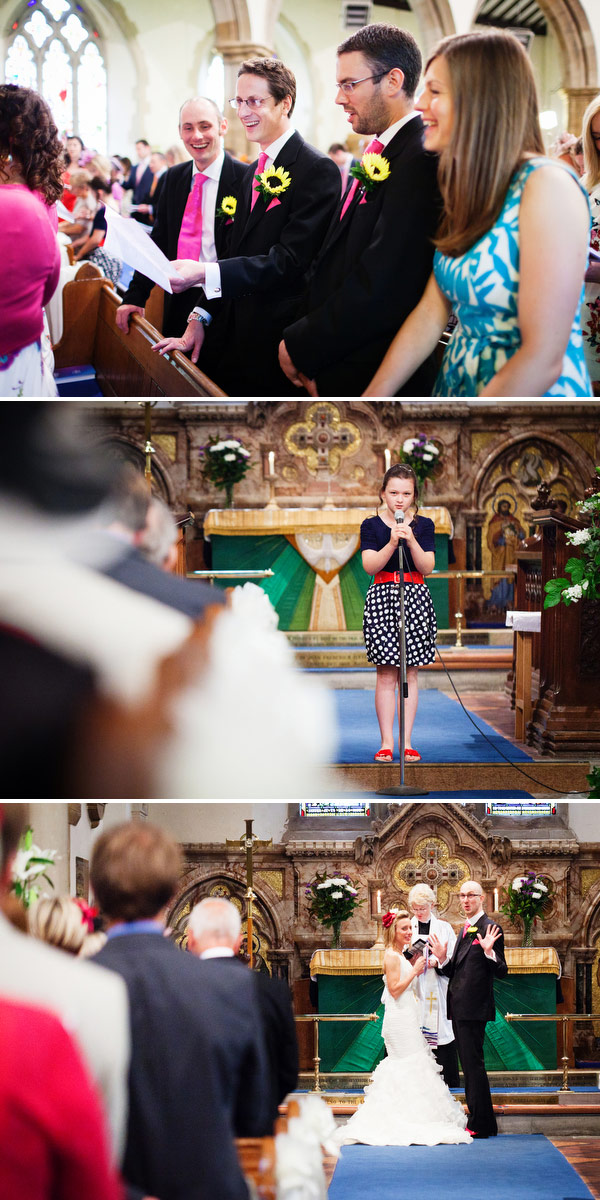 The full bridal party was 9 in total – 3 bridesmaids, our 2 fathers, 4 ushers and the best man. The men hired black suits and we bought everyone a hot pink tie and pocket handkerchief. Oli and his brother (best man Matt) also had hot pink spats made which I was dubious about but they got a lot of attention! My bridesmaids work maxi dresses. 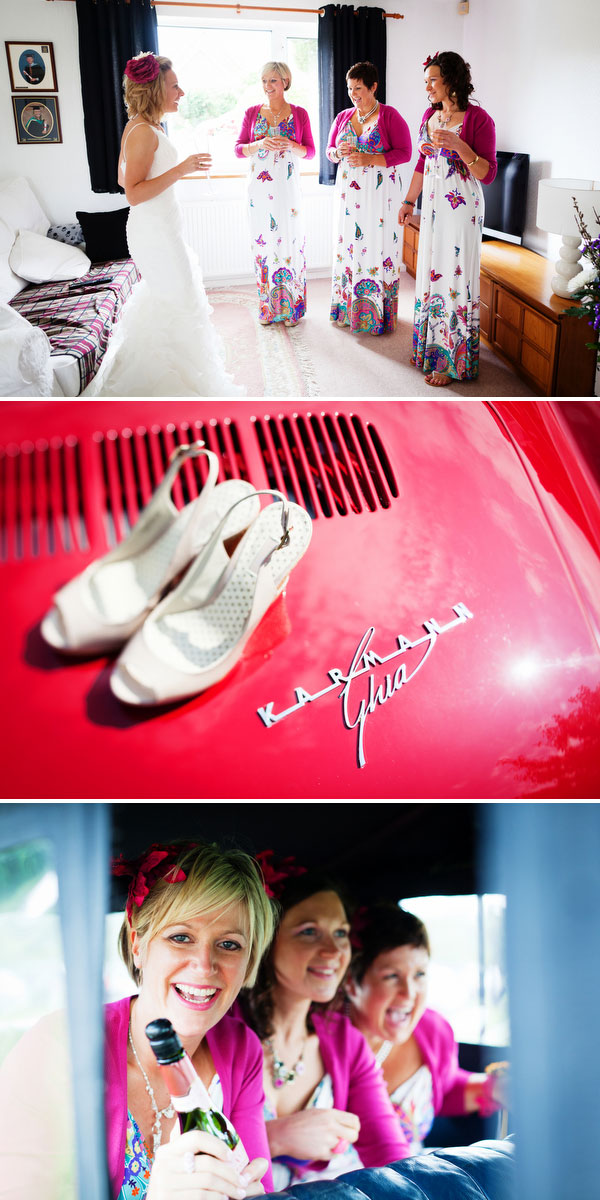 As my theme was non formal, relaxed, country style wedding I didn’t want formal bridesmaid dresses. I actually found the dresses on e-bay and they cost about £20 each and the girls still wear them today – I even bought myself one. They each had a hot pink bolero cardi to go with them from Monsoon. The mian theme was ‘colurful’ but the ties, corsages, cardigans and button holes stuck to the main concept of hot pink and yellow.

Oli had a suit made for himself and his best man. Black three piece suits whih he designed and got made by A Suit That Fits. The back of the waistcoat was hot pink silk which looked fab when the jacket came off and as mentioned above the spoats were an added bit of creativity on his behalf! Yes, he looked fab – he works in a creative industry so never wears suits and I actually prefer him looking casual but he did look great on the day so no 2nd thoughts when I got to the top of the aisle! Then again, I was blubbing that much I hardly noticed who was waiting for me – ha! 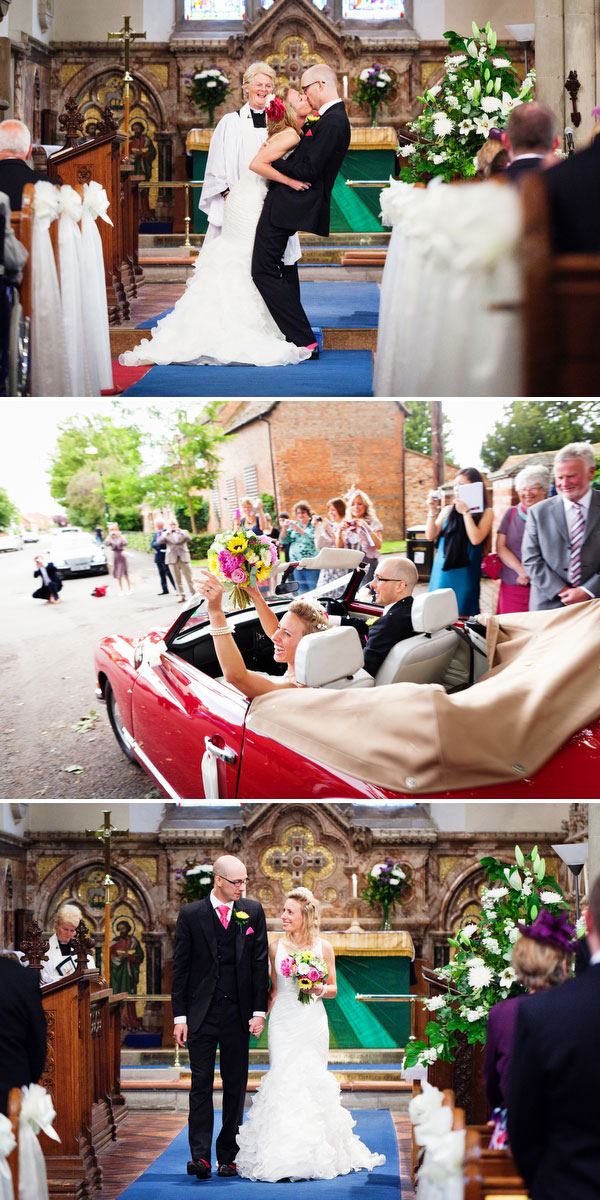 My mum, mother in law and their talented friends did all the arrangements for the church and the tee pees. I wanted wild flowers in old jugs and jam jars to give it a country fete feeling. I think they did an amazing job – we had flowers coming out of our ears! I bought the flowers from a flower market a couple of days before and then mum and co found all the foliage nearby – this saved loads of money. I got our local florist to make my bouquet, the bridesmaids wrist corsages and the button holes for the men.

I wanted bright bright colours and so mainly hot pinks, yellows and creams. The men wore sunflowers as button holes. I had peonies, sunflowers & roses in my bouquet. I really didn’t want ‘crafted, over complicated floral displays and was really pleased with what I got. 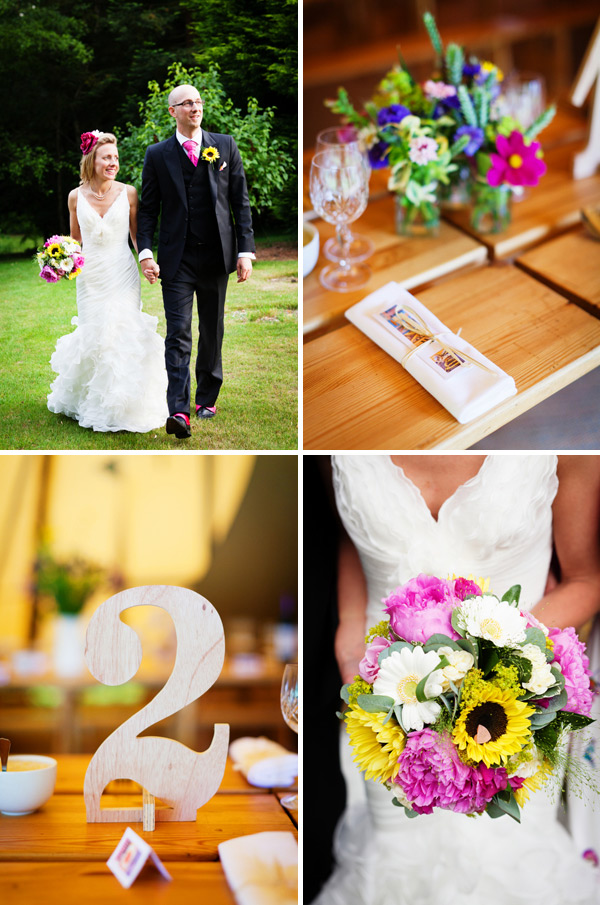 A Testament to Talent

Mister Phill did our photography – Oli knew him from his Uni days (Phil was his lecturer) and he’d done a wedding we’d been at just a few months before and loved the shots so there was no real debate really! Bearing in mind how many photographers there are, I have come across 2/3 brides through work here in London who have used or are considering Mister Phil which I think is real testament to how great his shots are.

He was with us for over 12 hours that day and worked his socks off! The pre wedding shoot was also great, I’d never have thought about having this but it certainly helped me become more comfortable being photographed and prepared me for the day. 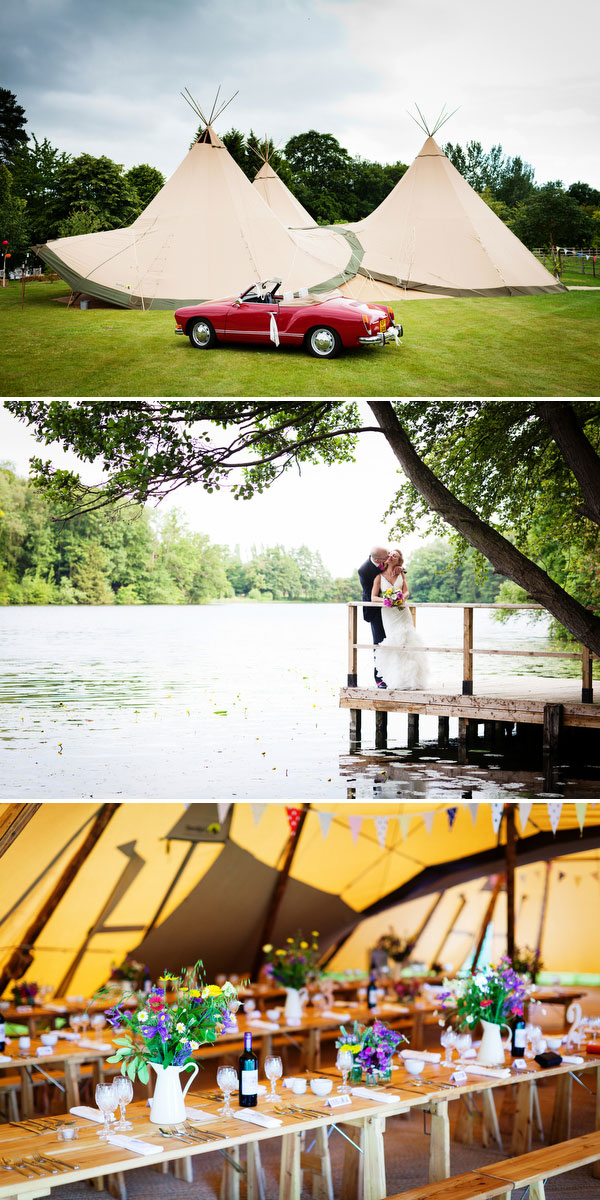 We had a live band who we loved and the dance floor was absolutely packed from about 9pm to 1am. The band also did the disco in between and played all the songs we’d requested – including ‘Jim’ll fix it for you!’ We just wanted everybody to enjoy the msc and there was a good mixture for all ages although the dance floor got a bit too raucous for the oldies later on – lots of drinking out of shoes going on. 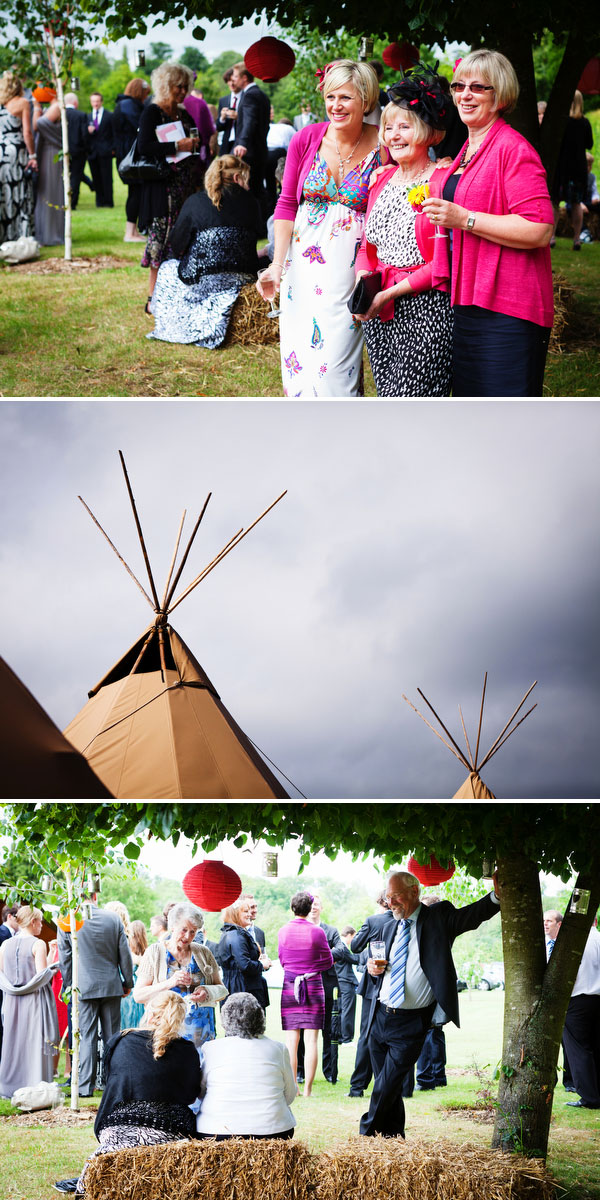 Our First Dance was Eddie Cochrane – C’mon Everybody was our first dance. Neither of us wanted to sway uncomfortably round the dance floor to a slow song so we did a rock and roll dnce as we’d both had jive lessons a few years before! It was great fun but a bit stressful on the night as we had been practicing for a good 3 weeks beforehand! We both fell over at the end mind – which made for a good few shots! 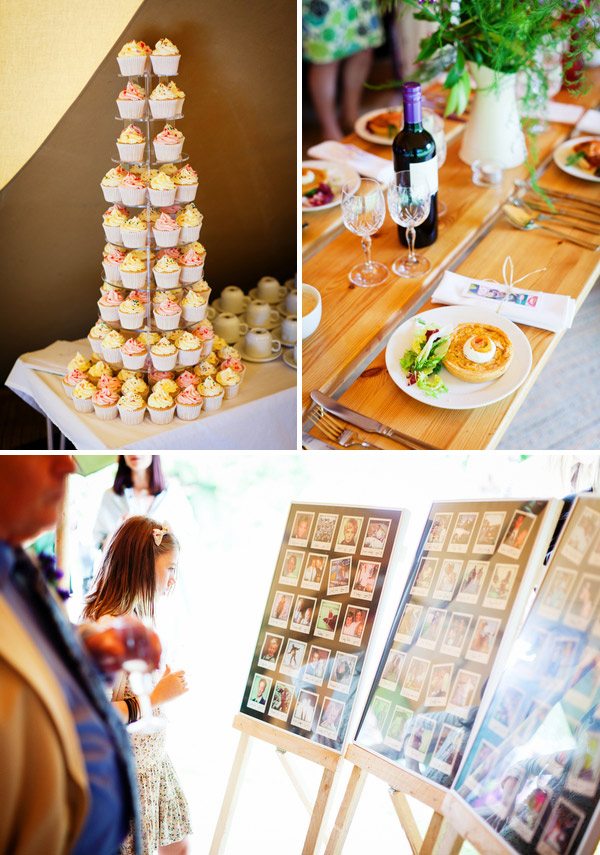 The teepees themselves are stunning so don’t need too much decoration – especially when filled with wild flowers. But, Oli’s mum and aunt made metres and metres of bunting which we used to decorate inside and outside. A friend of ours also lent us lots of Chinese lanterns that we hung outside in the trees and oli’s dad handmade some tin lanterns to hang in trees. He did this by using old tin cans, boring heat shaped holes in them and then you just pop a tea light in when the sun goes down. 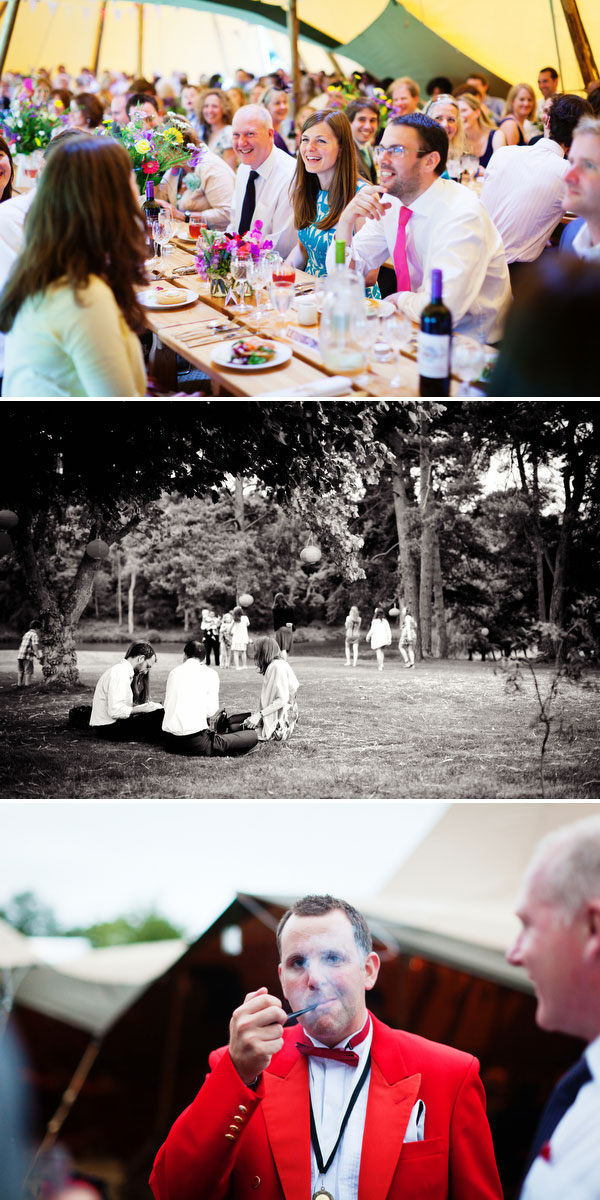 I can’t bear favours I’m afraid, I think they are a ridiculous waste of money unless you can get something really personal and unique. The day is really special to you and to your guests on the day but after that things like favours become redundant I think. I chose to spend the budget on fizz for the guests! 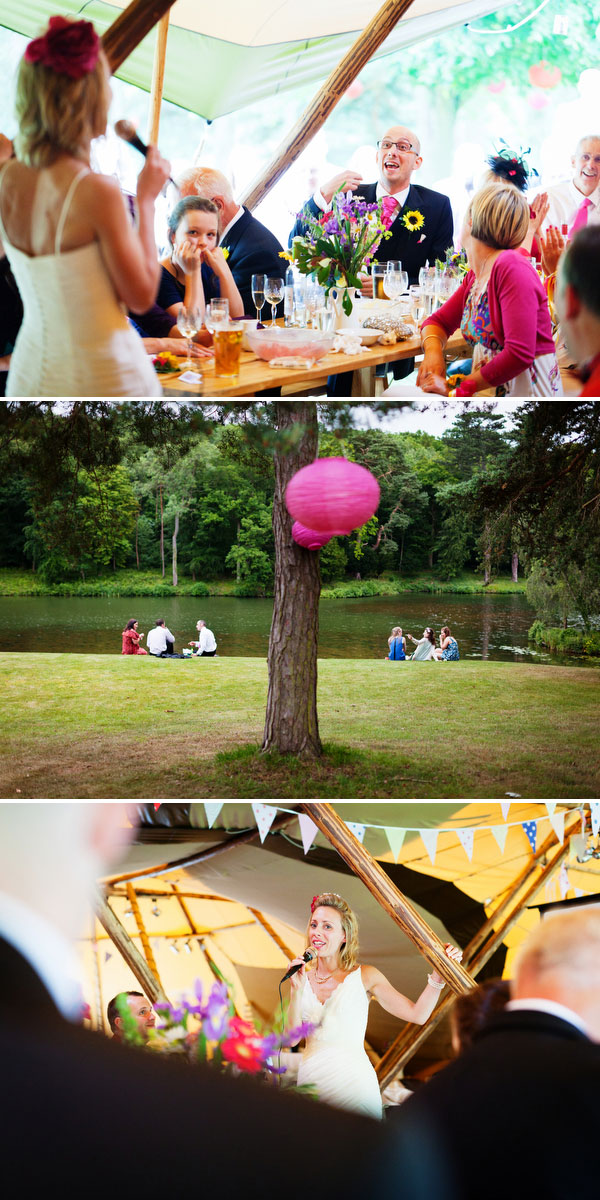 I walked down the aisle with my dad to a Buddy Holly Song ‘Everyday’ It really reminds me of my dad and my granddad and it’ also a favourite of Oli’s too. He had two friends who sang it live with a guitar.

Our third song in church was from the kids film Bugsy Malone. Oli and I both love that film and loved the sentiment of ‘You give a little love’ and so the whole congregation belted it out and did Jazz hands too. 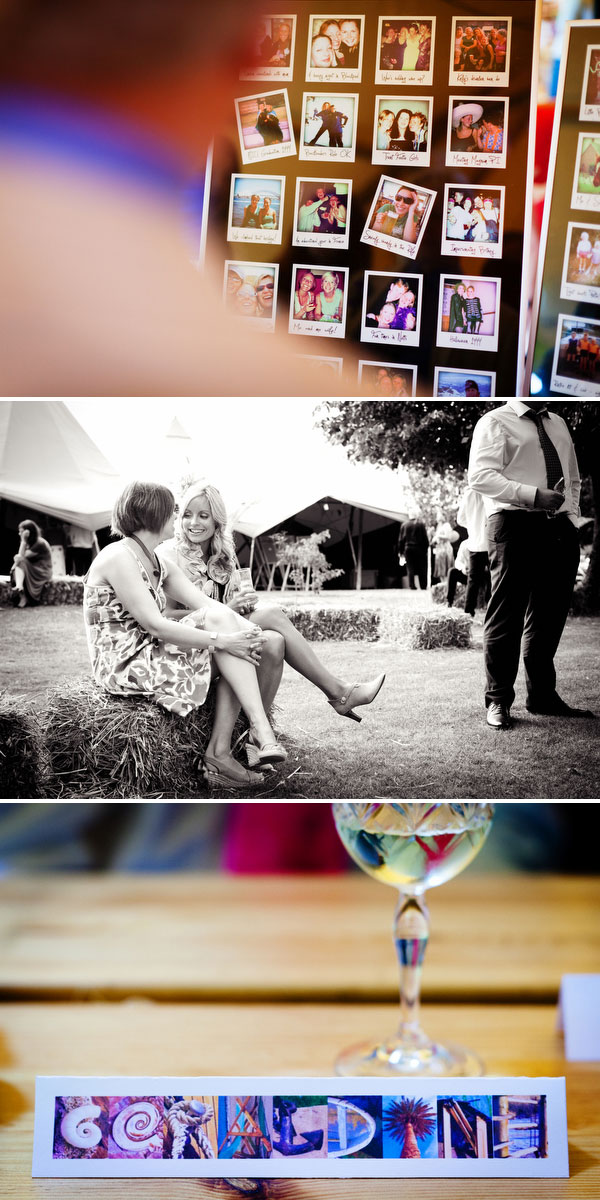 Keep the formal photo’s to a minimum – best bit of advice Phil gave us! We had a max of 8 shots and even that seemed to take a while. We love reportage photography anyway – it’s so dull looking at too many staged shots!

Ask people around you what they can help with – I think we saved so much money by using friends and family to do things – especially our mums as they were so keen to be involved.
We had a fish and chip van on the night which was very popular.

I work for a charity so as a friend of ours ran the bar and stocked it, any profit we made (£500) we donated to Cancer Research UK. We also managed to just charge £1.50 max a drink which was great – once the free fizz ran out. I hate it when guests get ripped off buying drinks at weddings. 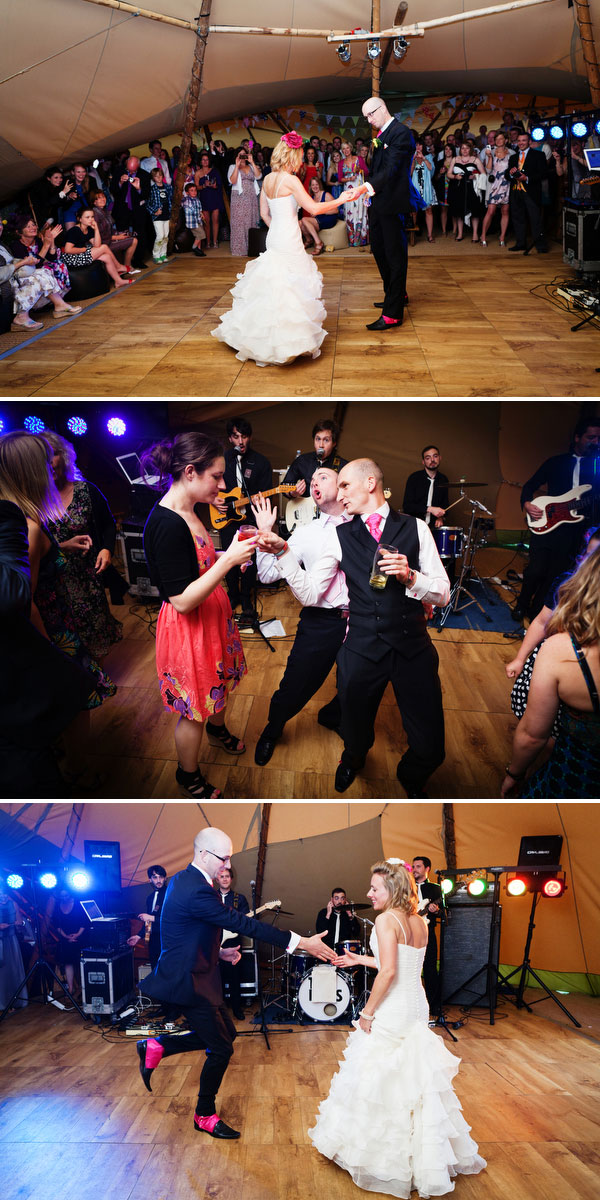 Grooms Suit –A Suit That Fits

The ceremony kiss – how immense was that?!

And sometimes it’s the simple things, like sitting by the riverbank with your nearest and dearest that really are the best moments.