As Charlotte and I get asked more and more for our expertise or opinions on weddings, we are required to choose ‘favourites’ of every kind. Depending on the context, our favourites can be very different on each occasion, but it is through doing this that I have begun to appreciate the things that I really love. True to myself, my choices can’t be pigeon holed but I am starting to sense a theme of clean, pared back design, regardless of the references.

Todays wedding, despite the vintage vamp lip and birdcage veil has a decidedly modern slant, with clean lines and simple but effective style throughout. Needless to say, it is going straight to the top of my ‘favourites’ list. 😉 It’s all beautifully complemented by the strong photography from Elemental Photography. I could have stared all day at these images…

Katie and Stevie got married on 30th April 2011 in a ceremony outside at Chapel Green Earlsferry, a ruin which overlooks Elie Bay in the small coastal village on the East Neuk of Fife, where Katie grew up.

Sandra Cormack at SC Make Up Artistry did both my and my bridesmaids hair and make up. She was recommended by a colleague at work. Sandra was lovely, made us feel totally at ease and has years of experience having done London fashion week, film and TV work. 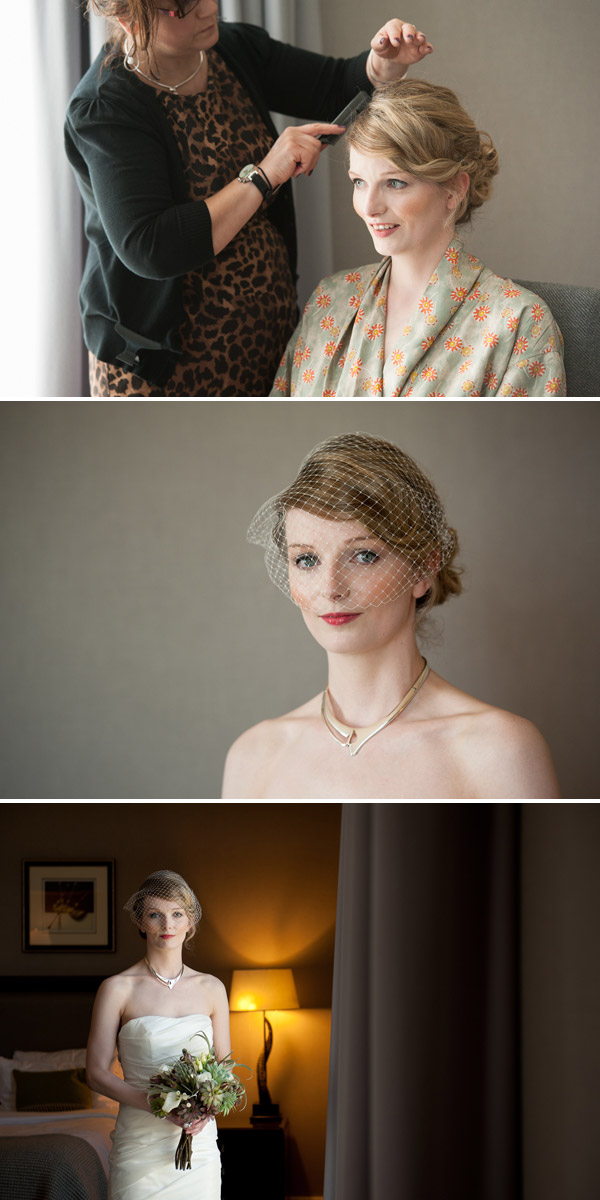 We had airbrush make up which has a much lighter coverage and suited me, as I tend usually not to wear heavy make up.

A Story of Two Dresses

I had two dresses as the first would have been impossible to dance in! 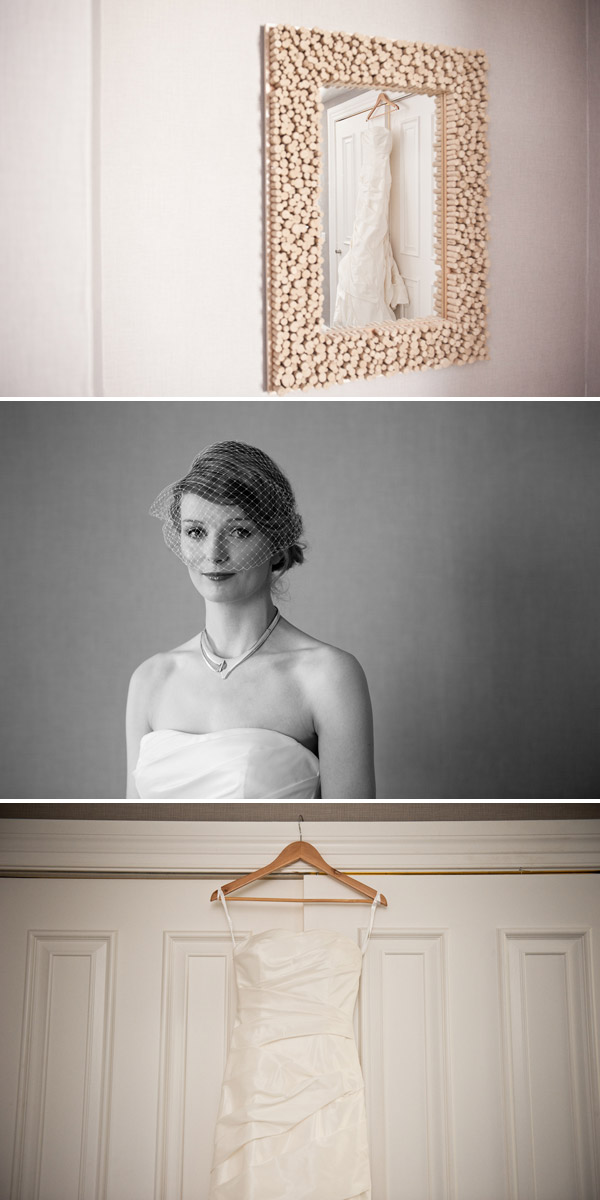 My ‘ceremony’ dress was from Emma Roy in Edinburgh and was Allure Bridal. It was a fishtail gown and was the first I tried on. Verity at Emma Roy had, in addition to the few I had picked out from the rail, chose 10 others so I had the opportunity to try on lots of different styles which I wouldn’t have chosen myself. It was a useful exercise in that I knew what I wanted and wasn’t swayed by any of the other, albeit beautiful gowns. As it turns out I think the style I chose is discontinued now. Subsequently, I only ventured into one other shop on the same day while looking for a dress. I had the dress customised by sourcing bridal buttons which were sewn down the back of the dress over the zip. The bustle was also arranged by the seamstress at Emma Roy.

As we were engaged in Iceland beneath the Eyjafjallajökull volcano the preceding March, my ‘holding’ engagement ring which Stevie bought me there was silver and Icelandic kalcedon. I love chunky silver jewellery and Bethsy Gray (a lovely Danish lady) in Glasgow is my favourite jewellery designer. I contacted Bethsy and commissioned her to make some cufflinks as a surprise for Stevie on our wedding day in a similar style to my engagement ring. 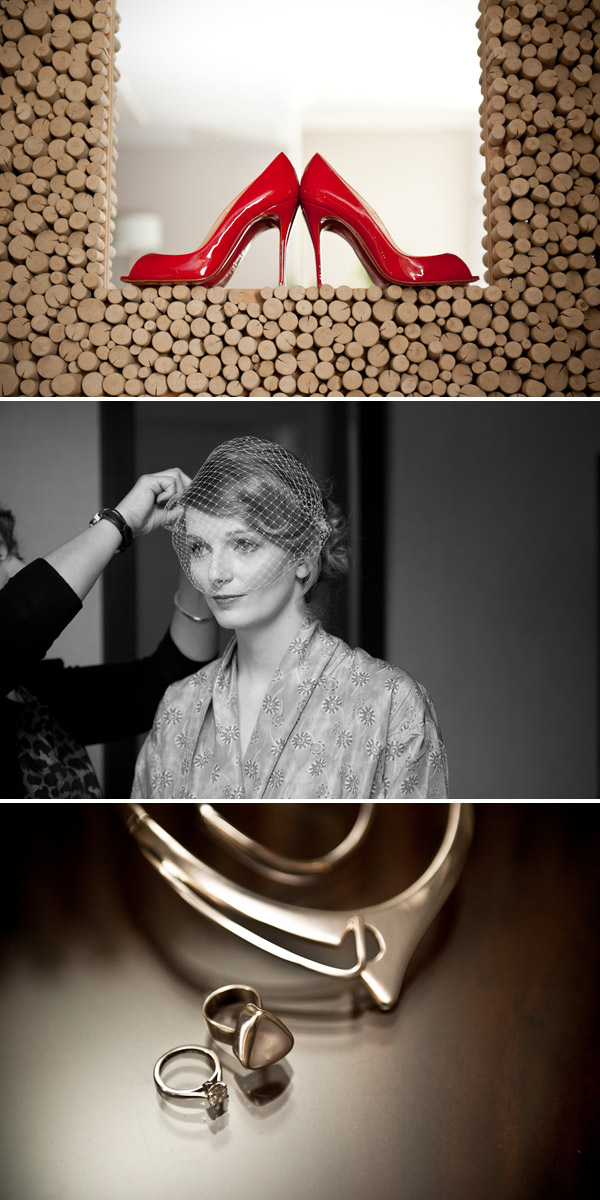 In addition, I had bought a couple of pieces for my Bridesmaids as gifts (silver and boulder opal ring, necklace and opal earrings). We found the silver orb necklace which Steve wanted to buy as a wedding gift for me in St Andrews. 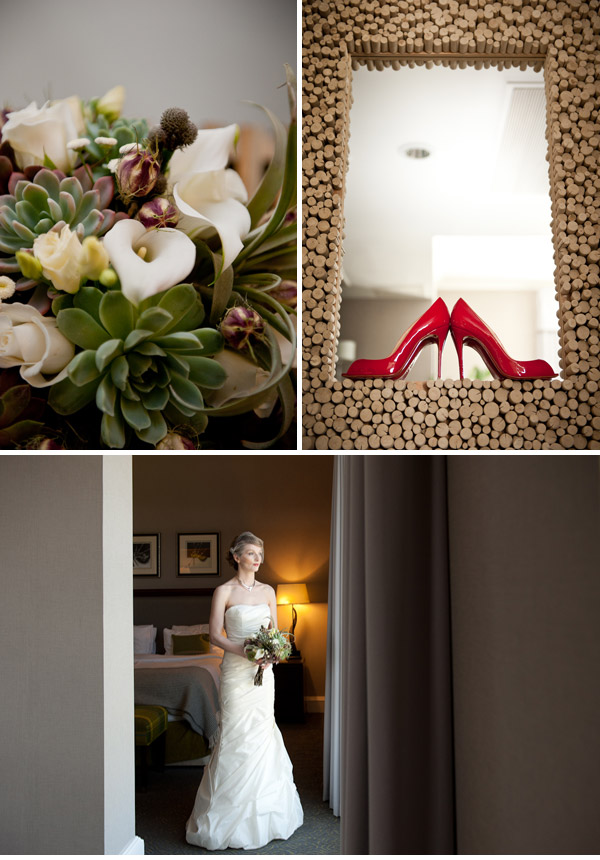 I made my birdcage veil myself – I had found a pair of silver 1950s Danish clip earrings from Abernyte antique centre, which Steve gave as a birthday gift. I sewed them onto some white widow’s veiling sourced online.
Being new to this wedding malarky, we had forgotten about wedding rings until about two months before the wedding! Thankfully several people recommended Claire McDonald from No. 5 in Cupar. She was so lovely when we visited her shop we knew we wanted her to make and source our rings.

I love shoes and I love red so it was an easy choice. I figured that this would probably be the only time I would buy a posh pair of shoes and I would want to wear them again after the wedding, so red Louboutins it had to be!

I had some difficulty sourcing them in Scotland as I was aware of only a few stockists, none of which had the shoe I had spotted online. After e-mailing the Louboutin London store the lady very kindly passed my details on to Selfridges who posted them up to me when they arrived in February.

I was very lucky that Steve’s mum used to be a florist and I knew I could trust her with the ideas we had. I knew I wanted quite sculptural flowers and as Steve has always liked cacti and succulents, I wanted to include those in the flowers we had. 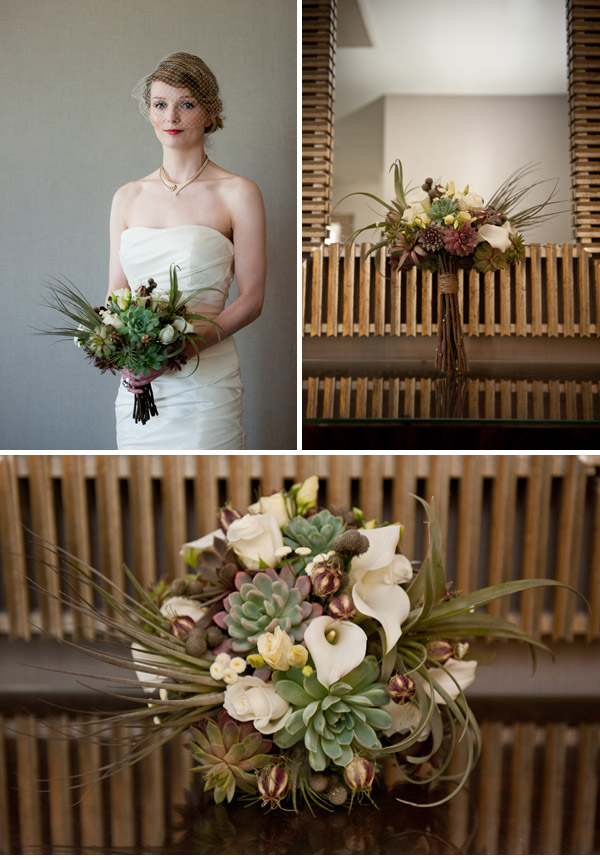 I knew I didn’t want my bridesmaids dresses to match but as it turned out although the styles were very different, both shades were pretty close. 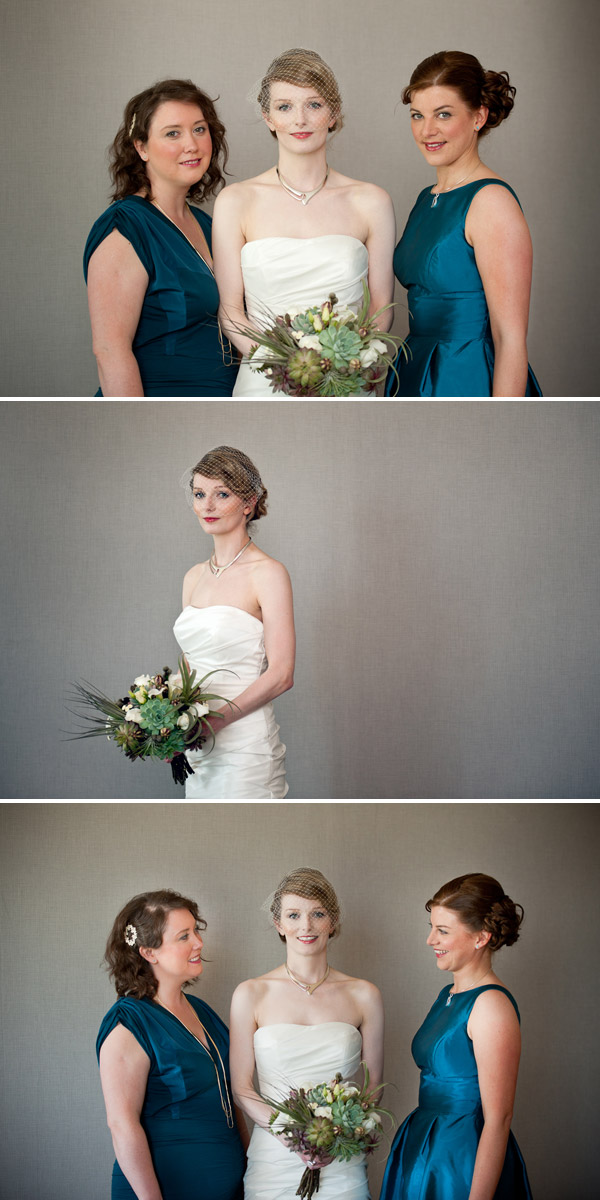 I had spotted the shorter Dessy dress some time ago and loved the teal colour. The longer dress which my bridesmaid chose was from Reiss. I knew I wanted them in red shoes too which they chose themselves. And red fingernails were a must!

Steve’s kilt was his own which he has had for 12 years in his family tartan, ancient Gordon. He contacted Howie at 21st Century Kilts who made a beautiful waistcoat and jacket which was lined in airforce blue fabric – the detailing on the jacket was very special. 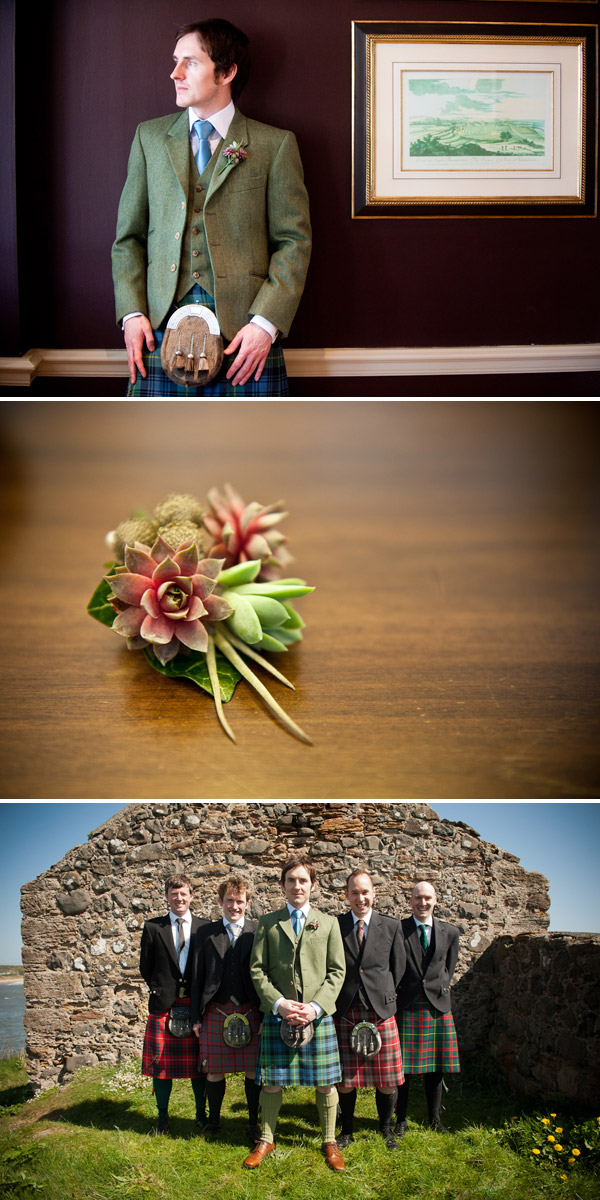 Howie also detailed Steve’s existing kilt to tie in better with his jacket and changed the leather straps to brown. He bad brown brogues from Jones the Bootmaker. His tie was also airforce blue sourced online. The best man hired a kilt from Slanj and Steve’s brother’s who were ushers wore their own kilts. 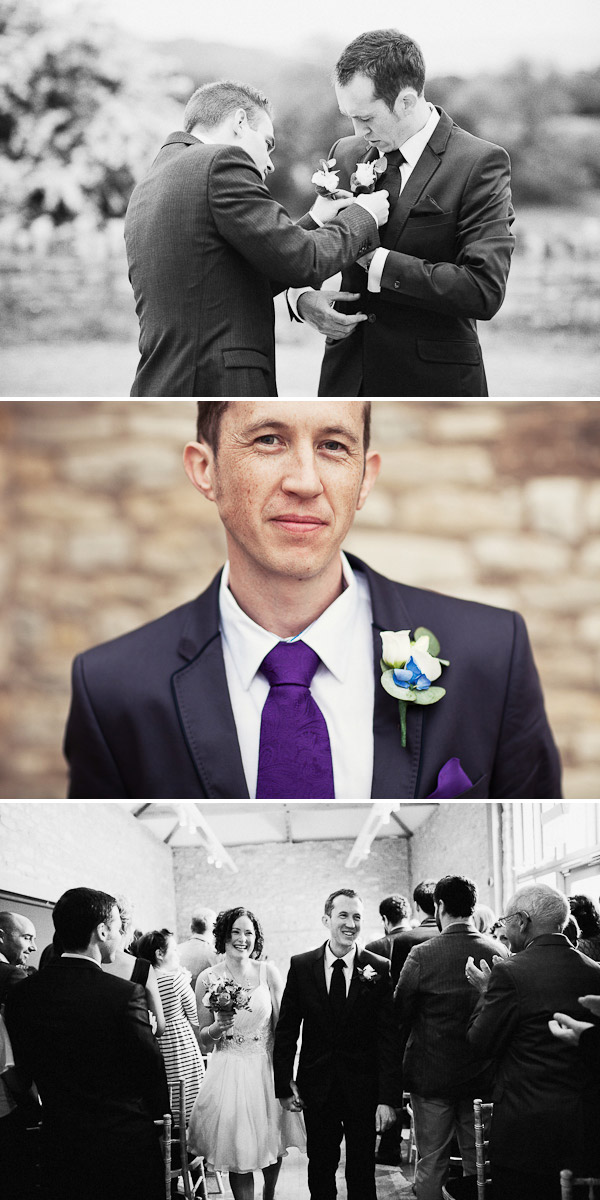 Both our wedding rings are silver. My ring was inspired by Danish design of the 1950s and 1960s which I liked which Claire redesigned and made. Steve chose a simple silver wedding band.

During the ceremony, we had music played by friends who Steve has known since school and university. They had agreed to form a band especially to play at the ceremony. As we wanted full on electric guitars, we had to hire a generator and hide it behind the ruin! Unusually for Scotland, we had had a bit of a spring heat wave which allayed fears we previously had of torrential, horizontal rain, and thankfully our wet weather contingency was not required. 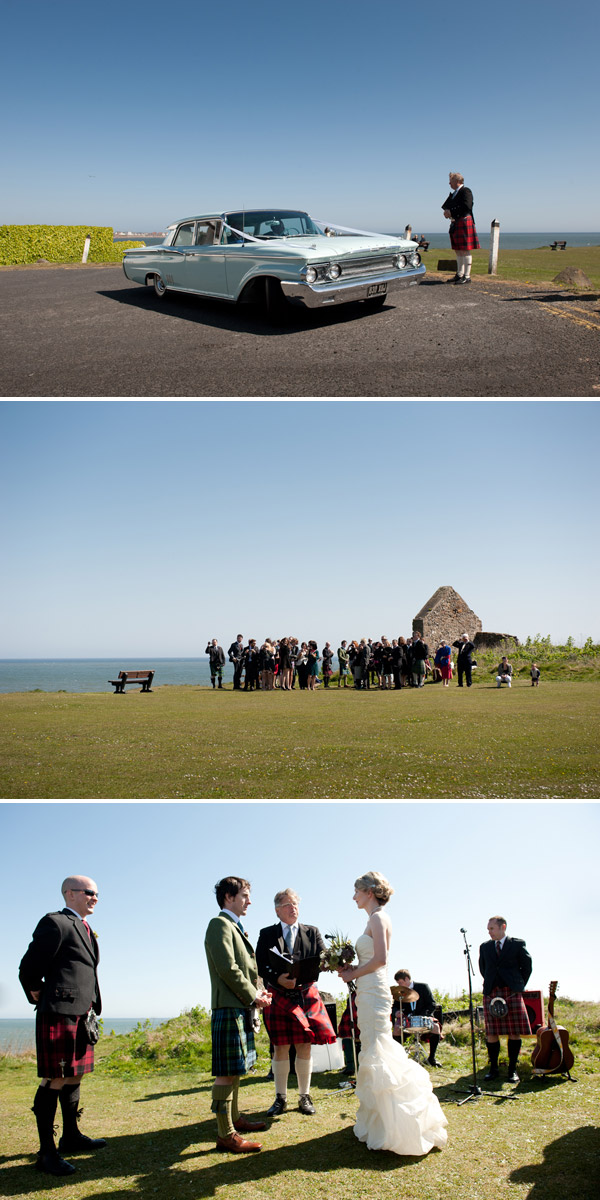 As we were having a humanist ceremony which we had written ourselves, our story was told well by our celebrant Duncan McKenzie. The guys played the first song Steve and I danced to in the Glasgow Garage the night we met, which was Buddy Holly by Weezer. 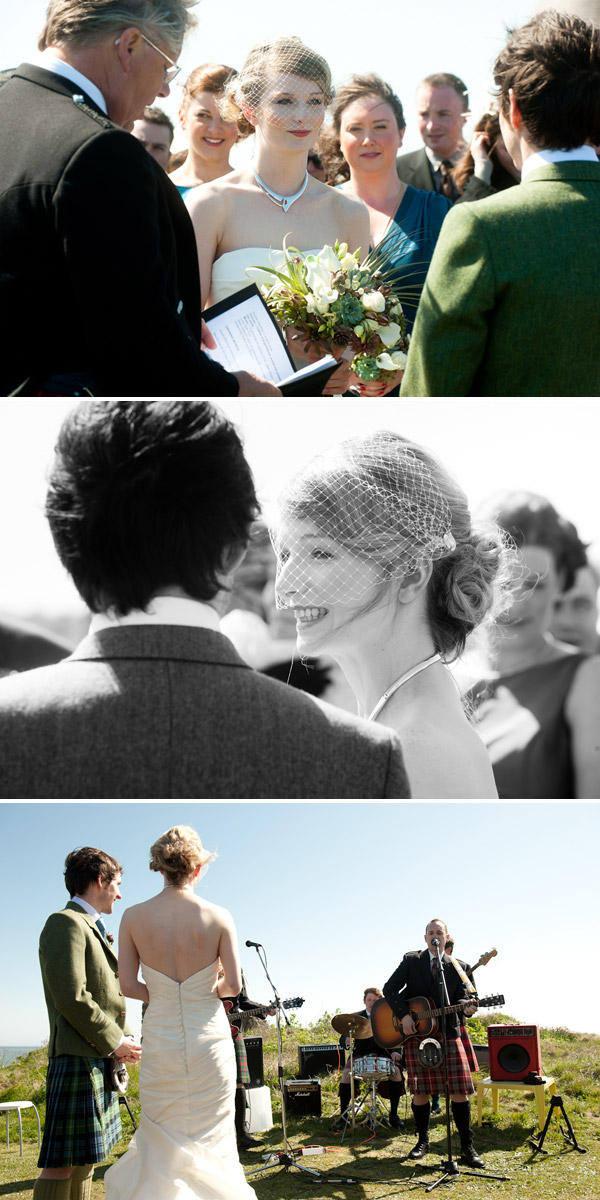 The second song they played was Everlong by the Foo Fighters. Given two of the guys stay in London, one in Glasgow and the other in Fife it was a huge effort on the guys’ part to make the performances so incredible. 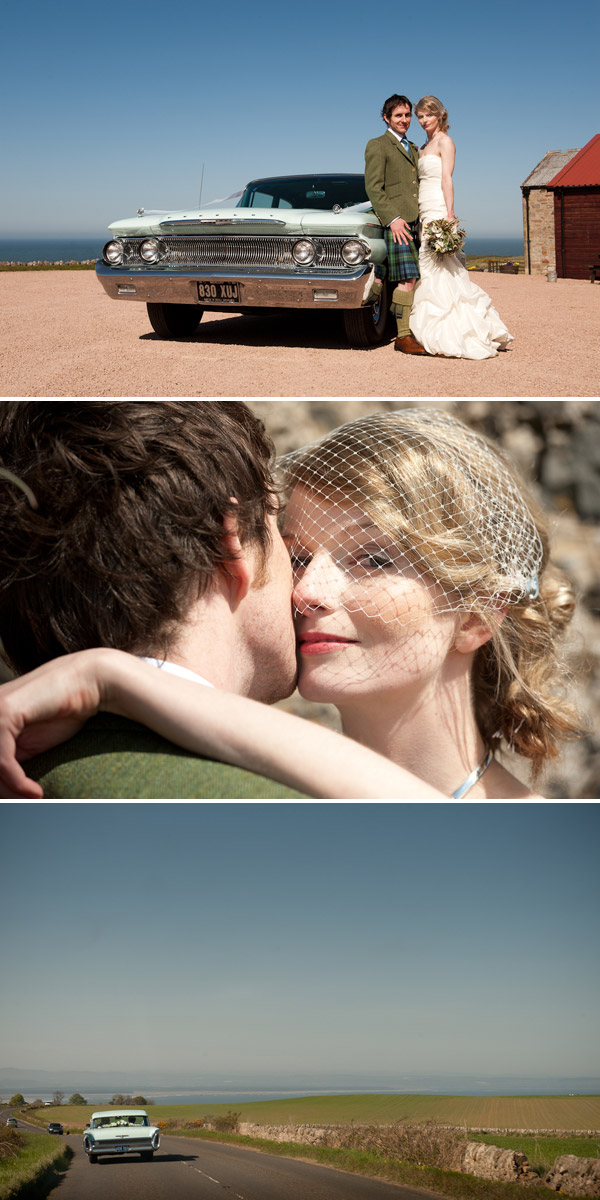 Birdcage Veil – DIY by the Bride.

Are you not blown away?

Wait until you see part 2 lovelies 😉

You can find Elemental Photography on The List, however, all real weddings are chosen on individual merit and no part of this post is sponsored.

Becky is at her happiest when dunking a slightly chilled chocolate digestive into a very warm, very milky cup of tea. She also loves her job and pinches herself every day to make sure that she isn’t in a graphic design dreamworld.
Tags:Scotland |Allure Bridal |DIY |Outdoor |Groom & Groomsmen |Humanist