If there’s one thing I’ve gleaned during my time within the wedding industry it’s that there’s much we can learn from our cousins across the water.

Sure enough, the Yanks have taken the simple wedding and raised it to an art form with so many different components that us traditional Brits don’t quite know where to put ourselves.

Whilst sometimes this can feel overwhelming, I actually think their ‘go big or go home’ attitude can be pretty exciting. ‘Why?’ I hear you ask. Because it forces us to rethink the parameters of what constitutes a ‘wedding’. Indeed, the modern day bride and groom possess an unprecedented amount of freedom in their wedding related decision-making.

When RMW exhibited at the National Wedding Show earlier this year, mums informed me time and time again that they’d never had this much choice when they were getting married. Their big day was almost pre-determined for them so they were thrilled that their daughters were experiencing a different reality – the chance to do things their way.

I fear I may have become a little philosophical for what essentially is just an inspiration post. You want the pretty don’t you…. 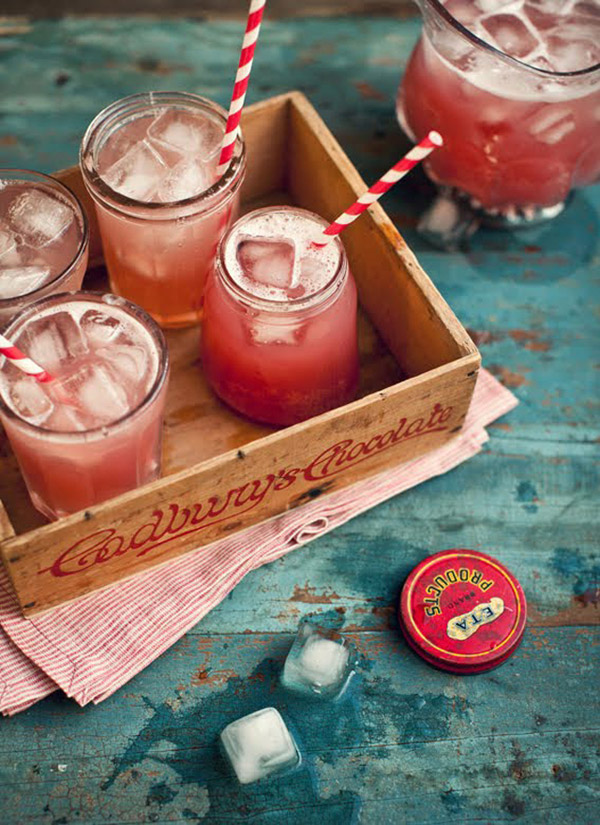 Image via What Katie Ate

Essentially what I’m trying to say is try not to be intimidated by the amount of choice open to you. You don’t have to do everything. The beauty of having such choice is that you are free to choose what you want to incorporate into your big day.

For me, one of these things was the American-inspired ‘cocktail hour’. Admittedly in the end, for financial reasons, it just wasn’t to be but I so desperately wanted to include this into my big day.

Instead I’ve settled for sharing some ideas with you lovely lot in the hope that one of you will host a spirited soiree and I can live vicariously through you.

Chic and sophisticated, the ‘cocktail hour’ is the perfect ‘filler’ between the end of the speeches and the beginning of the evening entertainment.

It signifies the end of the daytime activities and precludes the beginning of naughtier nighttime activity all under the guise of civilised fun. Plus it gives something for your guests to talk about too – what’s not to love?

Now every girl needs a pretty dress for a cocktail party.

Granted if you’re the bride then you’ll already be wearing a bobby-dazzler but seeing as it’s Christmas there’s bound to be a fair few of you looking for frocks for works parties and the like.

So we thought we’d spoil you by sharing some of our top picks and favourite cocktail dress images.

Which is your favourite?

Will you dare to bare or take the sophisticated covered up approach?

If you’ve decided that you are going to host a cocktail hour (lucky you!) then I’d really recommend going for it on the decor front. Not only does it help to set the scene for your guests thus enhancing their experience but it also signifies that the wedding schedule has moved on to the next stage. Remember, the cocktail hour should be an event in itself, not a bleary memory consigned to oblivion.

And there’s a plethora of inspiration out there to help you do this.

The obvious place to start is with the cocktails themselves. Adding glitzy swizzlers and straws or utilising unique containers such as these test tubes pictured here elevates the average cocktail to something a little bit special.

Whilst I couldn’t fulfill my cocktail hour fantasy I did ask my venue to provide champagne saucers rather than flutes at the champagne reception for more of a unique touch. The guests looked rather fabulous clutching their coupes and many commented that they felt that they were in an episode of Downton with such fantastic glasses.

Designing cocktail-focused paper pretty as part of your overall stationery suite is one way of really integrating the event into the overall wedding schedule. Think about designing bespoke drinks menus or even opting for coasters that double up as a wedding guestbook.

Equally paying attention to the overall decor of the area in which you’ve chosen to host your cocktail hour is a surefire way to make an impact. Covering high tables with gorgeous linen and topping them off with pretty florals, painting cocktail signs, and ordering monogrammed napkins are all economical ways of transforming a space into a designated cocktail venue.

Ok so this board is really just an assortment of delicious cocktails. But we all need something pretty to look at on a Tuesday afternoon.

I suppose the point I’m trying to convey here is that you can create cocktails that are absolutely in keeping with your wedding colour scheme.

Hosting an Autumn wedding? Why not serve berrylicious cocktails…

Perhaps you’re having summertime nuptials…provide your guests with something light and refreshing instead.

You could even opt for your a cocktail using your favourite flavours and ingredients such as Earl Grey tea or rose infusions.

Shake the lemon juice, sugar syrup and gin together with the ice cubes until chilled. Strain this lemony, gin goodness into a champagne flute and top up with champagne.

Add the lemon peel as a final touch. TA DA!!

So what do you think?

Do you feel under pressure to host the wedding of all weddings? Does the plethora of wedding inspiration out there motivate or terrify you?

Do you welcome the big day trends that filter across the big pond or shudder in horror?

Will you be hosting a cocktail hour on your big day? Perhaps you see this as a gratuitous waste of money that would be better spent elsewhere. If so, what features highly on your list of priorities?

Let us know your thoughts…

Lolly is a self-professed frustrated florist and styling maven with an endless passion for all things pretty.
Tags:ASOS |Elizabeth Messina |Groom & Groomsmen