This is fast becoming one of my favourite W-days ever on Rock My Wedding…..

Jordan and Ines included every detail I consider amazing in their Croatian Big Day, Unique bridal gown, bridesmaids in a print ( I know – I have so been waiting!)… beautiful setting, everyone doing exactly what they like and everybody having a truly great time.

We heart having your day your way. 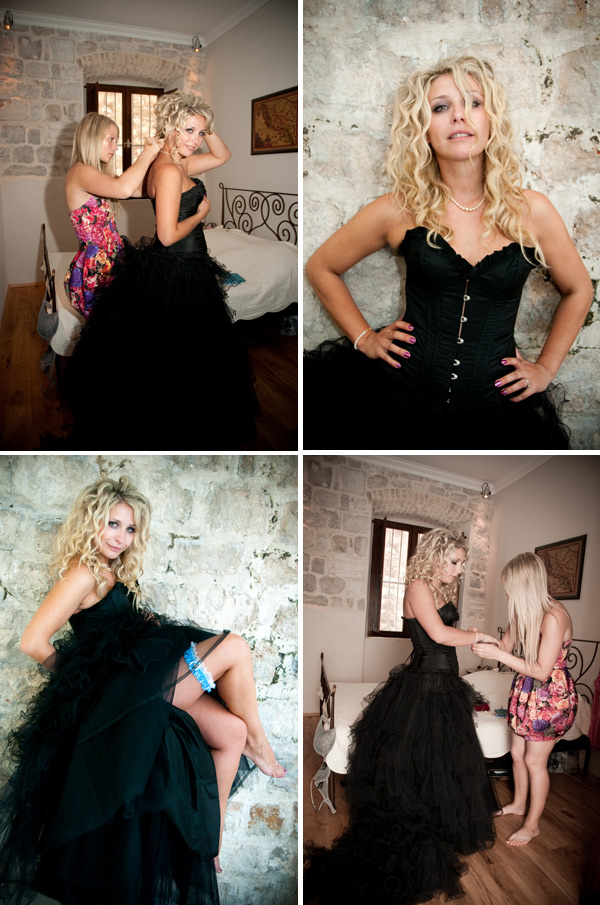 The proposal was very unromantic really. Jordan had been working in Croatia on the night of the 12 Sep 2008 and wanted to get back to propose to me on my birthday, the 13th. I was kind of hoping he will finally pop the question. There were too many secretive trips with his mum and mates without me. He finished work at 12pm and headed off on the 5 hour drive through the night to get a flight at 8am. Around 3:30am he was clipped on a mountain highway and flipped the car. The other driver never even stopped….

After a few hours dealing with the police he hitched a lift to the airport with the pickup truck man who came to collect the car, and managed to get on the flight. ….He finally got home after a hefty £500 bill for the car and asked me to marry him. And then swiftly fell asleep. The proposal was very unorthodox. He asked me in our bedroom with a kind of exhausted relief. We were both happy he was alive I think! 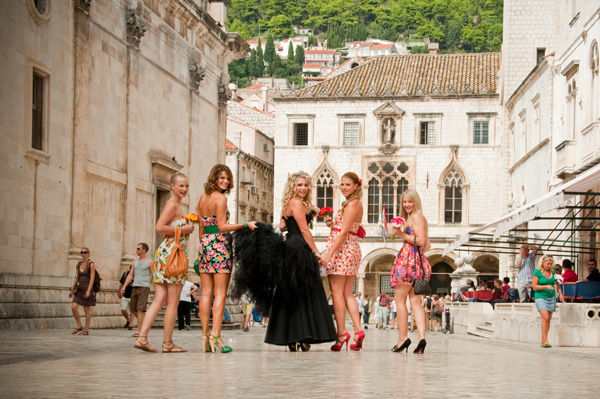 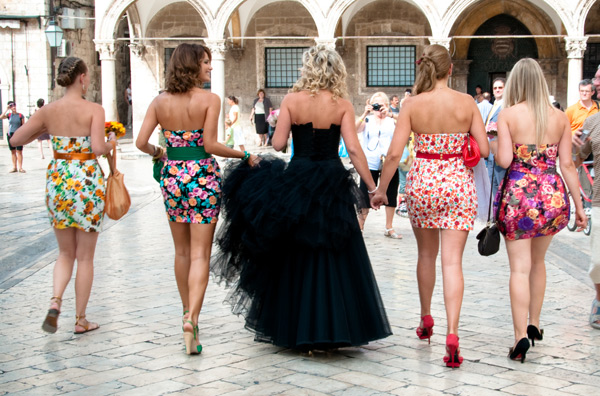 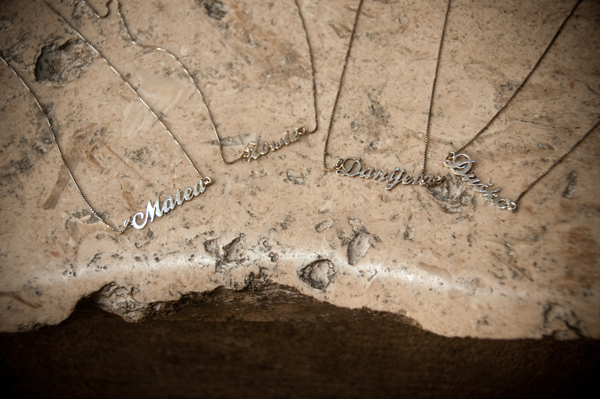 The bridesmaids wore 4 completely different floral minis from the high street with individual bags and shoes. Very eclectic! I wanted something different again! My original idea was to let them choose whatever they want to wear, different tastes different characters….But then I went shopping for a dress for my hen party and instead of buying the dress for me I ended up with 4 different ones for my brides maids. They match the shoes and bags according to the colours of their dress. 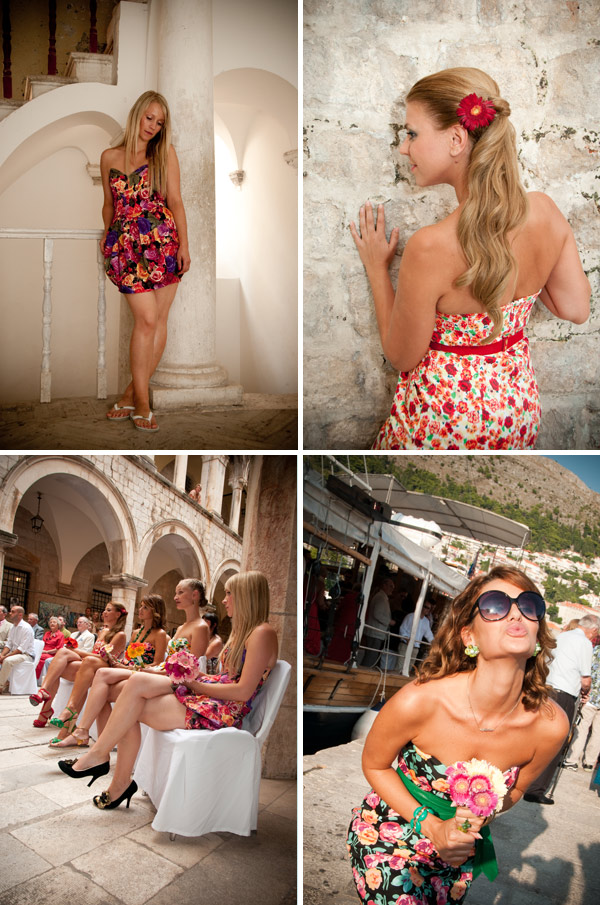 I choose gold sparkly heels from Dune which I wore only for the ceremony – they were so high that I couldn’t keep my balance on the boat!! As soon as we got on the boat I changed to flip-flops (black havianas) and stayed in them till the end of the evening. I wanted a purple pair but couldn’t find any nice ones….they were supposed to match my nails and eye shadow. 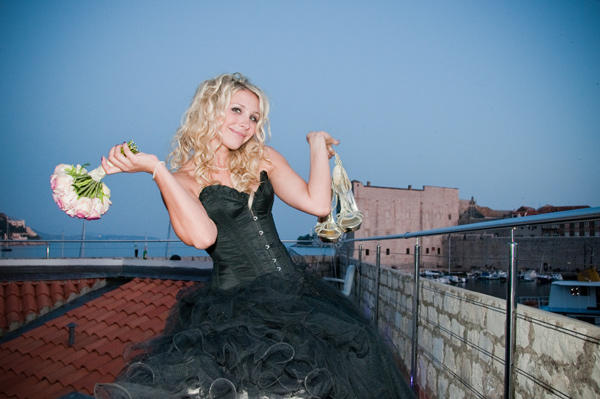 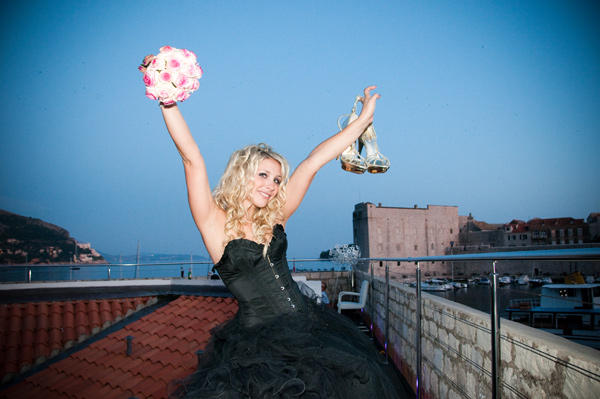 The ceremony took place in Sponza Palace in Dubrovnik’s old town. It was my dream place. When I was growing up in Croatia then former Yugoslavia you weren’t allowed to have a wedding in there. Sponza use to be a custom office in old Dubrovnik republic, but now it’s an archive and being rented for weddings, parties etc. Around 70 people, almost all of our friends and family from England came and of course the Croatians!

We did not want any flower decorations as the palace itself is a pristine example of 14th Century architecture from the renaissance period with baroque touches added throughout the years. We thought it would ruin the romantic black-white feel that the place gave we chose simple white chairs and had some rose petals sprinkled down the aisle to decorate the interior. 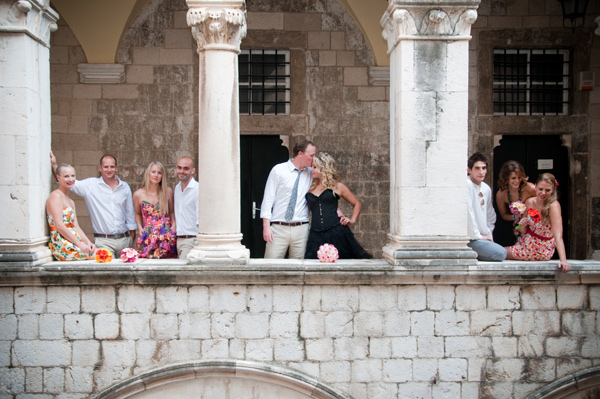 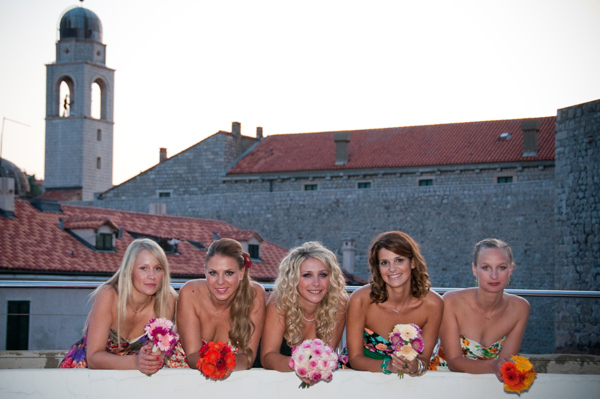 After the ceremony we took a sunset cruise on the Adriatic followed by a reception at Gil’s. An old sailing boat “Vedrana” took us around the city walls of Dubrovnik and Lokrum island whilst we feasted on champagne and little cups of fresh strawberries, raspberries and blackberries….By chance we walked pass the lady selling fresh fruit on the street and thought it would be fitting (so much nicer than your plain typical canapés). I have to say that I couldn’t believe that a couple of Croatians who live and grew up on the sea where getting sea sick, while the English wanted to go for a swim! 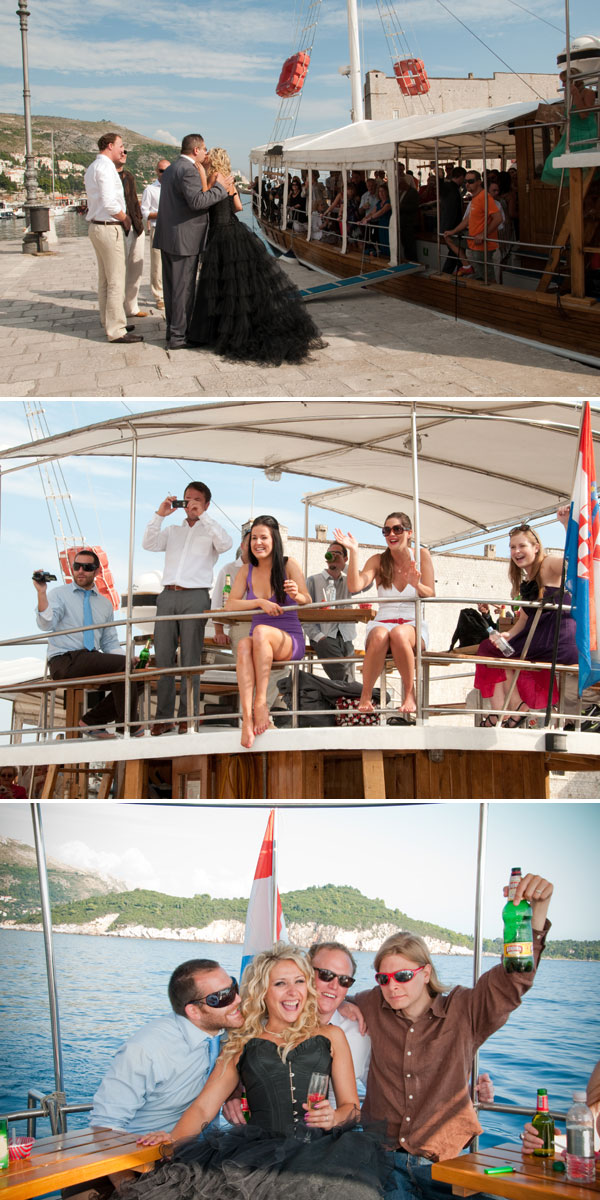 After the boat ride we went to take some pictures whilst our ushers and brides maids escorted our guests to our early evening reception drinks at Gil’s cuisine & Pop lounge. Gil’s is a French-fusion cuisine restaurant in and on the city walls overlooking the harbour of the old port in Dubrovnik.

Again Gil’s itself is so tastefully decorated that we did very little. We felt there was no need for centrepieces or flowers when the venue was already so tastefully adorned. And it was in purple, pink and black. The dinner was mouth-watering novo French cuisine and we experienced everything from Parma ham, scallops, Bres chicken, to lemon cream and meringue pie with fresh citrus and syrup. 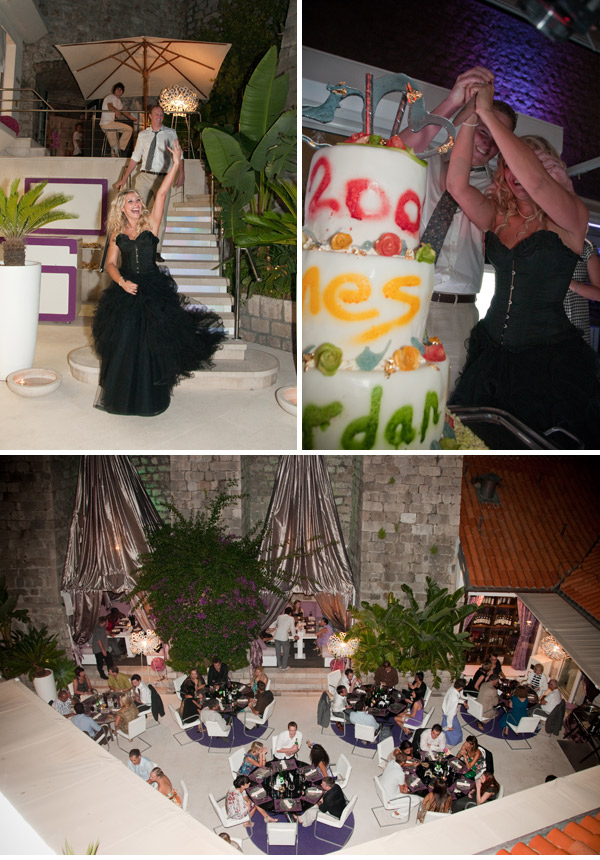 The cake was bespoke, an oversized graphite cake that was later stabbed much to the horror of the pastry chef. Jordan chose dessert and dinner so I chose the cake filling. Chocolate sponge with chocolate mousse inside, chocolate all the way! 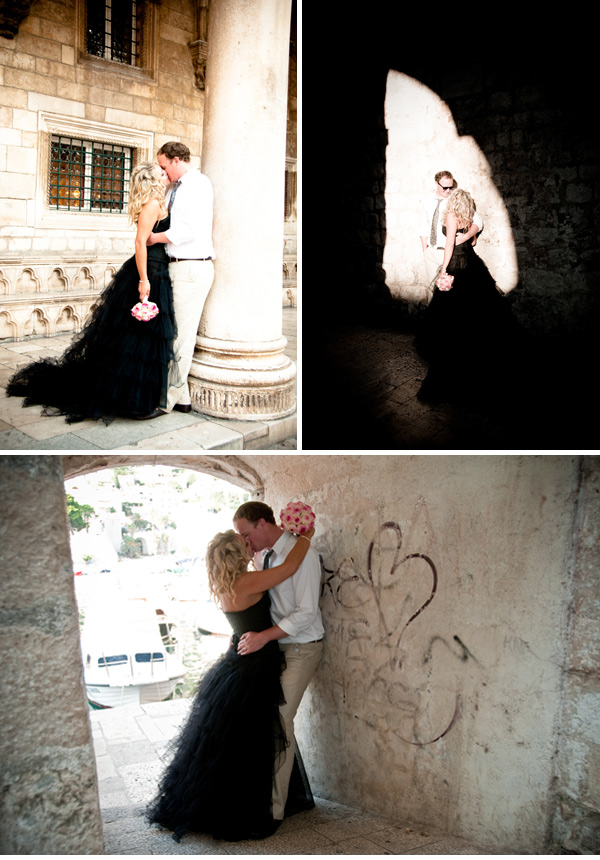 Being photographers ourselves it was very hard to chose the one for us. We weren’t even that bothered. So after months of not having one we asked Sue to came along and join us for the big day. Sue has been part of the Source Images team for a couple of years now and she knew our style. We stressed that we prefer pic’s of our friends and family rather than us.

She was amazing on the day especially when both Jordan and I tried to take over the shoots and suggested images. She later admitted we drove her insane and had to shut us up by saying “I am a photographer here!” 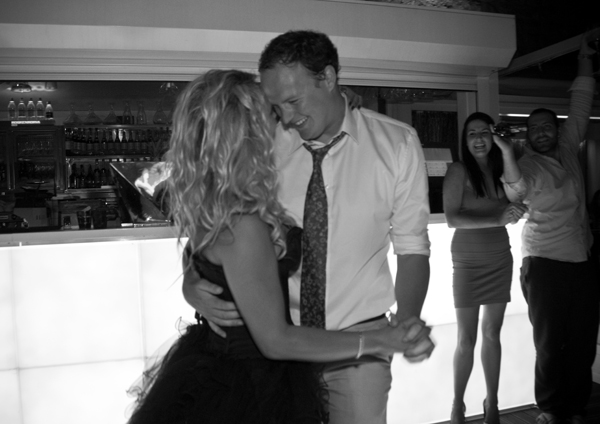 I walked down the aisle to “Lay lady lay” by Bob Dylan (favourite song), we exited to “Don’t stop believing” by Journey. For the evening we had anything that was requested, rock to reggae and everything in between. The first dance was “Memories are made of this” by Johnny Cash which we also use as a quote on the back of our invitation. We are big fans of Johnny. 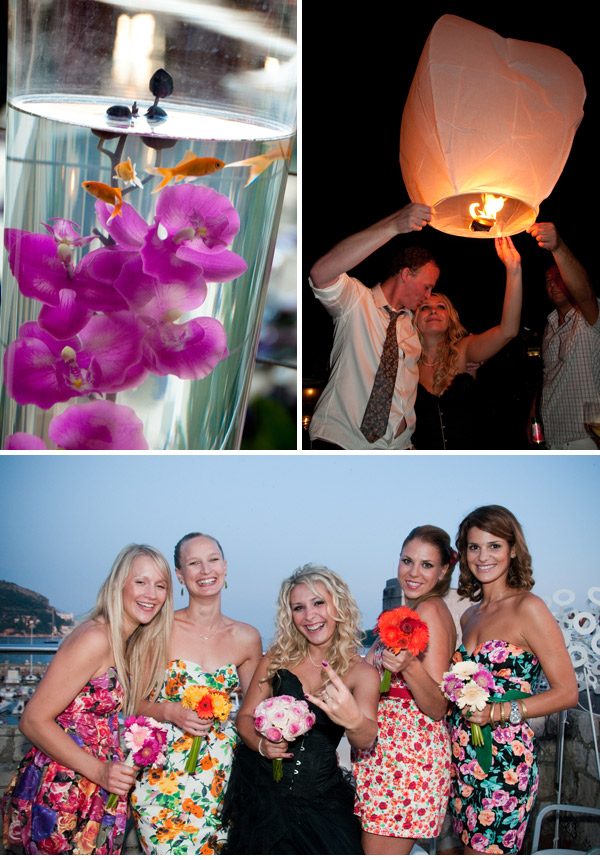 The most important thing to remember is don’t stress! – it will all be fine and everyone will have a great day. If you want to have a yellow dress, do it! At the end of the day it is your day!
We really did manage to organise this wedding in less than 1 month. Our previous venue cancelled on us three weeks before the big day. It all worked out just fine and better in the end. But it all happened in Croatia 😉 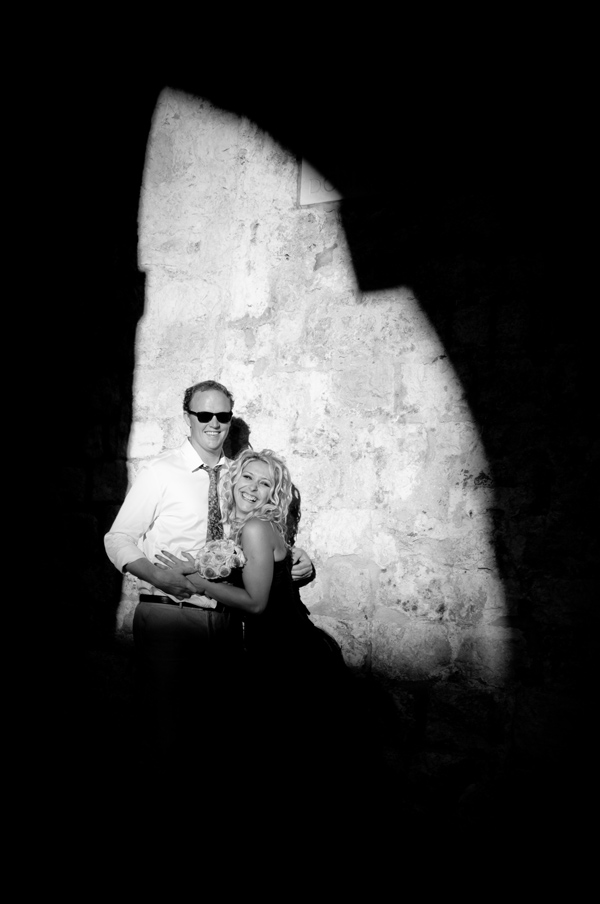 How cool were the bridesmaids? I would get married all over again just to have my favourite girls in a print!

I am also going to look into making a trip to Croatia, I had no idea it was so breathtaking.

With thanks to Jordan and Ines Banks for sharing the images and of course sharing their fantastic wedding.

Big Having Your Day Your Way Love

14 thoughts on “Colour Me Beautiful……part 2”