The W-day of Gordon and Victoria-Rose is the perfect mix of pretty, chic and vintage-inspired. Combining both Gordon’s Canadian roots and Victoria’s British heritage, this couple made sure their big day was full of personal touches and significant details.

There was no formal wedding party dress code for this Edinburgh affair which for me just adds to the unique aesthetic and relaxed atmosphere of the day. And the bride’s original (and beautiful) 1950’s floral print tea dress was fifteen quid off of ebay.

I kid you not.

Coping with last minute nightmares, family illness and keeping to a limited budget Victoria is one hell of an inspiring bride.

All of the amazing images are courtesy of Love Lust List member Craig McBeath. 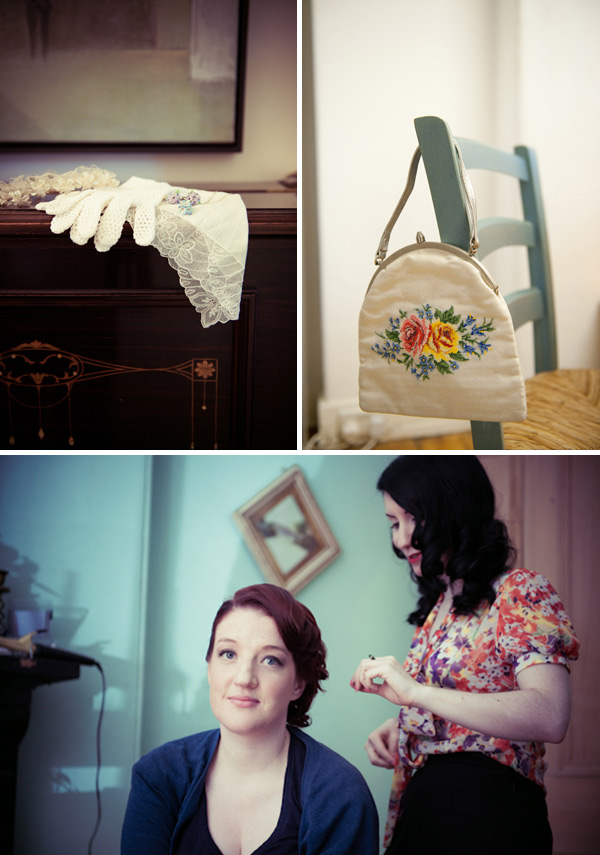 A friend found a flier for Miss Dixiebelle’s in Glasgow who also have a shop in Edinburgh. They sell ‘What Katie Did’ lingerie and Besame make up products which I buy quite often and which made me feel they might be good for a trial styling. The trial was really encouraging, I chose a style from the 1940s/1950s and Anke went for a 1960s up-do, both with make-up to match. The other bridesmaids all lived in different places outside of Edinburgh and the UK, but trusted mine and Anke’s opinion. On the day, the two stylists were amazing and they did all 4 bridesmaids, my mum and me.

The makeup artist was not the same person as at the trial, and I did not know she was going to be replaced, which caused a little panic as she was not using the Besame products I had chosen, and the makeup was not the same as I would have liked, but I didn’t really worry about it. The bridal party also had wild-flowers put in the hair, provided by the florist.

From Old To New

The dress was originally £15 from ebay, and was bought 5 years ago (before I met Gordon), as a 1950s vintage dress, which I thought at the time was a bargain. I had never worn it, as she’d never found the right occasion. When we got engaged we didn’t really have a budget for a dress, and I thought I might use something I had already, as I collect a lot of vintage dresses anyway, One of my maids of honour Anke, thought that the dress could be altered to lower the neck-line but we had been looking at other dresses as I had always had a particular 1950’s style dress in mind.

Having gone shopping in Glasgow a couple of times, some of the bridesmaids and I realised it would be hard to find vintage dresses in sizes bigger than size 10. So I went back to thinking about how to find a dress that was affordable. One night I met Anke from work as we were going out for dinner, and we walked a past a vintage shop called ‘Threadbare‘ on Broughton street. and I decided we should go in to look at dresses, we went in the shop and met the shop-owner who was also a dressmaker called Cecile. She had lots of sample dresses of vintage styles that she had made herself, she seemed really nice, and she said that I should bring some dresses in and she would see what she could do with them. So in the end, I took the £15 dress along and Cecile said she could change it to make it more special by making a ‘sweetheart’ neck-line, adding new sleeves and Cecile remembered that she had an amazing vintage floral dress which matched the first dress perfectly, and so the fabrics were merged together…. And so my wedding dress was born.

Cecile could have made any dress but because we only had a 6 month engagement and a limited budget, the best decision seemed to be to have an existing dress altered. She also helped find a dress for the maid of honour. Cecile was very helpful and just like a friend. We were very lucky to find her. 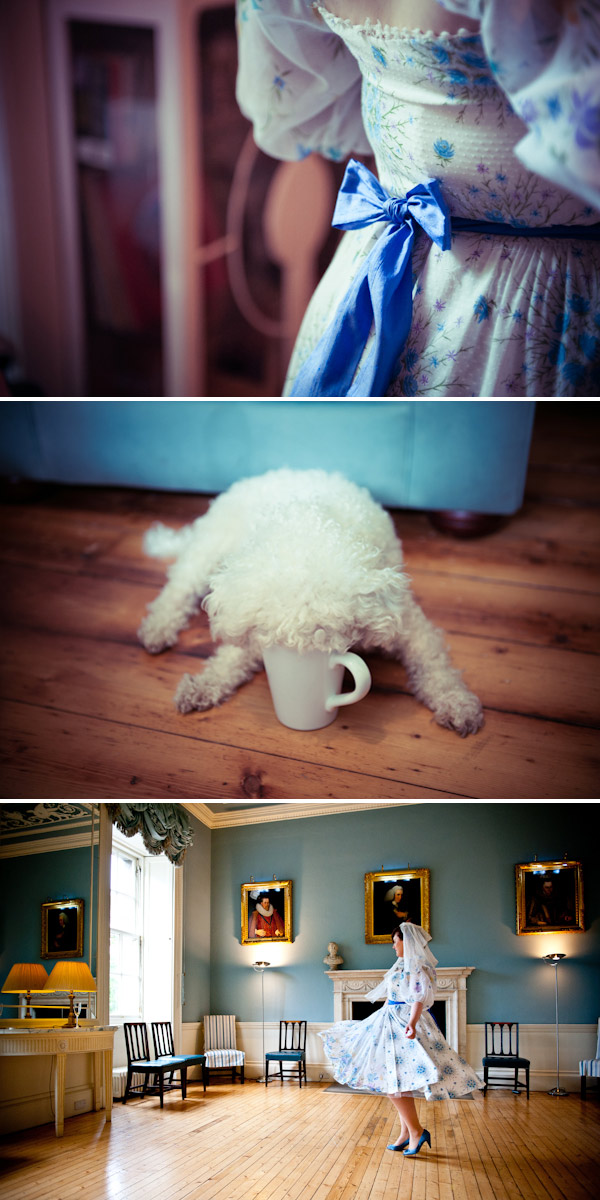 Something Borrowed And Blue

My jewellery came from my mother’s collection and a friend of the family’s antique shop. The earrings and necklace were Mossware china and I wore a short-style 1950s lace veil (with a few moth holes for character – hidden with pins!!).

My shoes were baby blue Kurt Geiger kitten heels (a style called Hepburn) from the Kurt Geiger Shop online, which were bought before the final dress choice was made.

There was no formal dress code for the groom’s party, although there was a general idea that all guests should be dressed in a vintage style (basically like a cast member from Mad Men). Also as a bit of a salute to Doctor Who the groom and the two fathers wore bow-ties.

The bridesmaids clothes were a mixture of the vintage theme and the colour blue. Victoria had given them free reign to choose what they wanted but it was really hard for them to find dresses. They were all so far apart and vintage dresses in good condition can be difficult to find without paying lots of cash.

There were two Maids of Honor; Anke’s dress was a 1950/60’s shift dress from Threadbare and her shoes were Jitterbug from Kurt Geiger, Mary the other Maid of Honour lives in the Shetland Isles so it was really difficult to find her a dress. 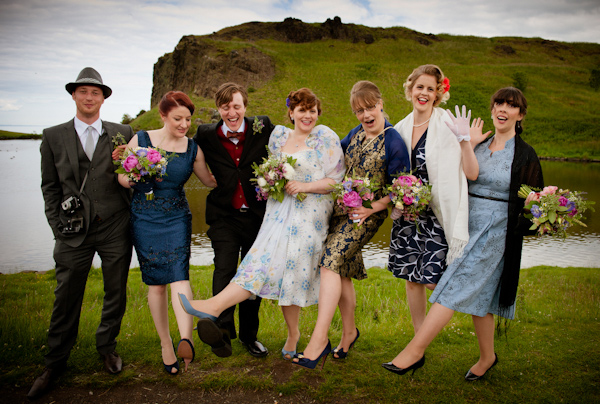 We did buy a couple and posted them to her but they were not right. Tragedy struck a month before the wedding, Mary’s back completely went and she was rushed in to hospital. We thought it was touch-and-go that she would be walking, never mind make it to the wedding. Being the amazing friend she is, Mary insisted that she would make it to the wedding even if she had to crawl! With Mary pumped up on some serious pain killers, Mary’s mum drove her from Shetland to Edinburgh, arriving two hours before the wedding. Mary had a dress in her cupboard that she had never worn and it was just perfect. I was so excited and overwhelmed that she would come, I would not have cared what she wore.

Sarah, who was a bridesmaid, wore a 1950’s very beautiful dark blue beaded dress that I had found for her in Armstrongs in Edinburgh. I had gone in the shop and had thought it would fit her perfectly, so hid it at the back of the wardrobe in the shop. Keeping her fingers crossed that it would still be there she took Sarah in and to her joy, it was still there! Sarah tried it on and it just looked amazing, so a bargain for £34! Rachel the other bridesmaid had been in France for the duration of my engagement and upon her return came to my flat and found one of my own dresses she liked. 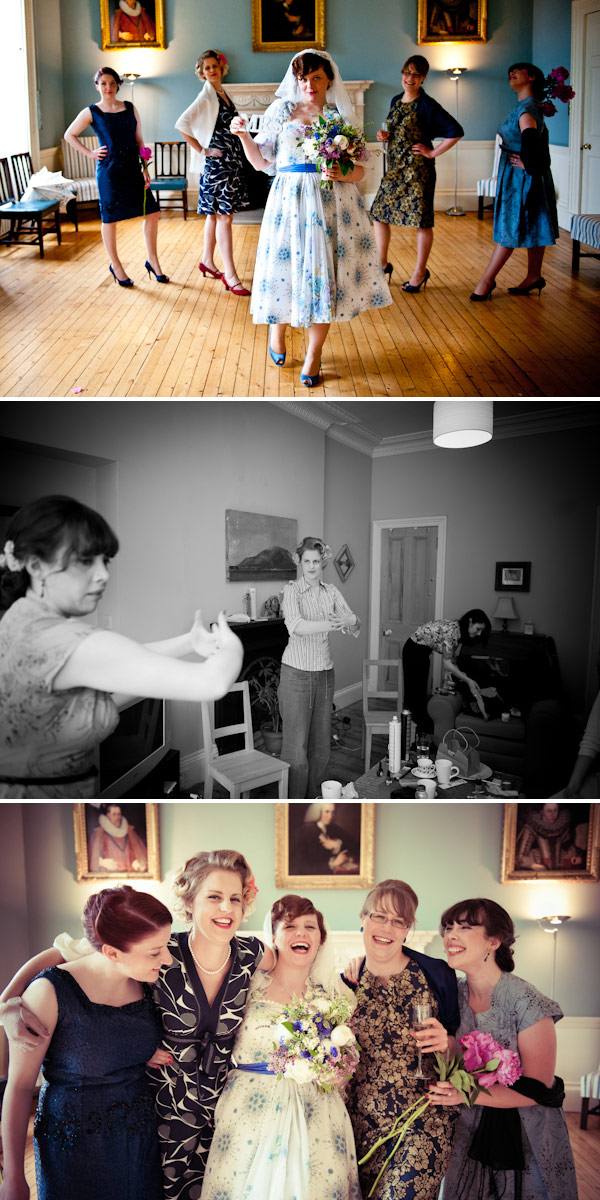 The florist was called Natalya from ‘Narcissus‘ on Broughton street. We found them quite last minute and asked them to use wild-flowers because I had originally wanted to get married in her parents’ garden, which unfortunately wasn’t suitable. I chose flowers that grow in my parents’ garden like cornflowers, lavender, and Peony roses. Natalya was really helpful and knew exactly what I was thinking when I had started talking about my parent’s garden. I also told her that my wedding colours were blues and purples, and that I wanted my bridesmaids to have quite colourful flowers. She emailed us some pictures of different floral options soon after, and we were able to choose from home by email. 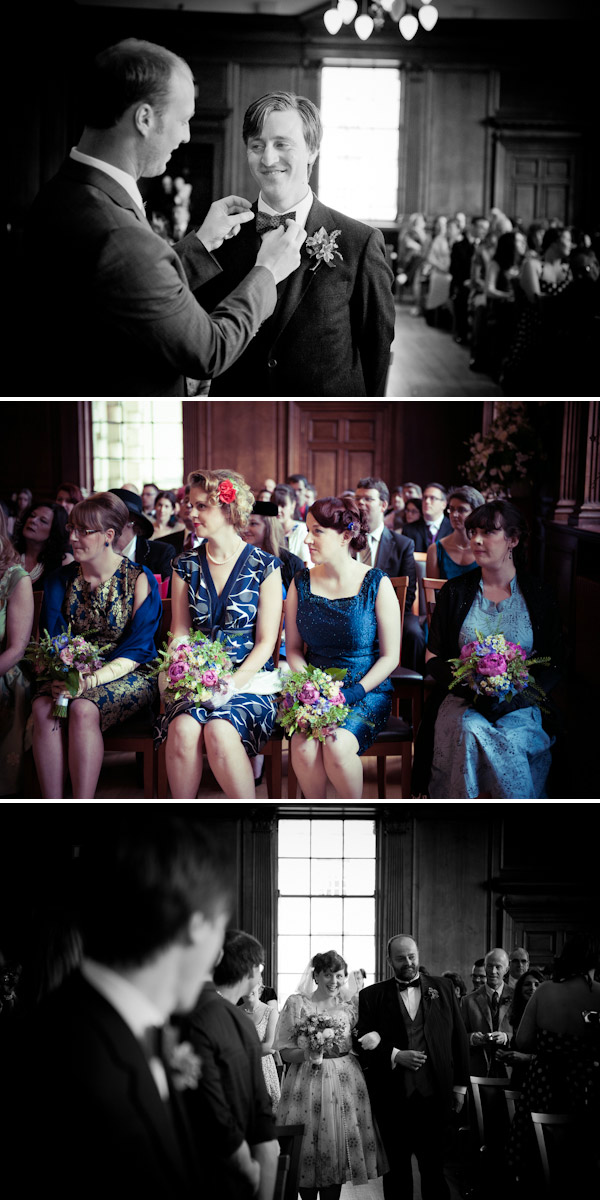 Natalya was really relaxed and we couldn’t have got it done at such short notice without her. The flowers on arrival at the wedding were just beautiful and I felt like Natalya had read her mind. The buttonholes were a mixture of lavender and thistles which were for Gordon’s close friends (both girls and guys) so we had corsages as well, with the same flowers.

Gordon got a new shirt and a new suit, in Charcoal grey wool, from Walker Slater on Victoria Street, the shoes were from Vegetarian Shoes in Brighton (by internet mail order) and the Waistcoat, bow-tie and braces were from Armstrong’s near Bristo square. I was very keen for Gordon to wear a waistcoat! Gordon got a real bow-tie so had to teach himself how to tie it from a youtube video. Possibly not completely straight, as it needed to be adjusted periodically throughout the evening to bring it back to the horizontal… 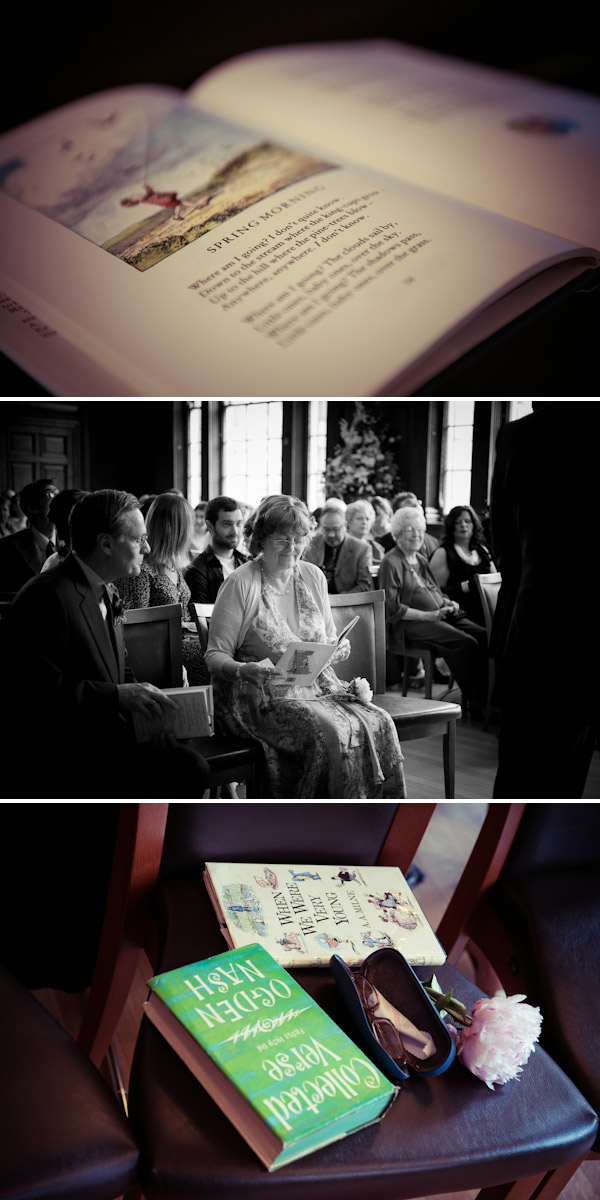 Craig McBeath we found randomly on the internet searching for Wedding Photographers in the Edinburgh area. We found his website and were impressed by his online portfolio, his pictures were professional but relaxed and seemed to capture the emotion of the day without being too formal. We met him early on, to arrange a pre-wedding photo shoot and he was very relaxed and reassuring, and we liked the sample albums he had brought with him, so we were happy to go with him. On the Wedding day, Craig was very helpful, and helped with all the little details (sorting out bow ties, and encouraging the Bridesmaids) he was very funny and the parents loved him, during the day my father was not feeling well, and it later turned he had a heart attack and Craig was amazingly supportive to my father and was really helpful behind the scenes, he was incredibly kind and none of us will forget how much he went out of his way to not only take lovely pictures but to be a support on the day.

After the wedding Craig sent us a photo slideshow of some of his best shots, and we and our friends were all in tears. He had captured so many intimate moments and really the essence of the day. We would definitely ask for him to photograph any family events in the future. 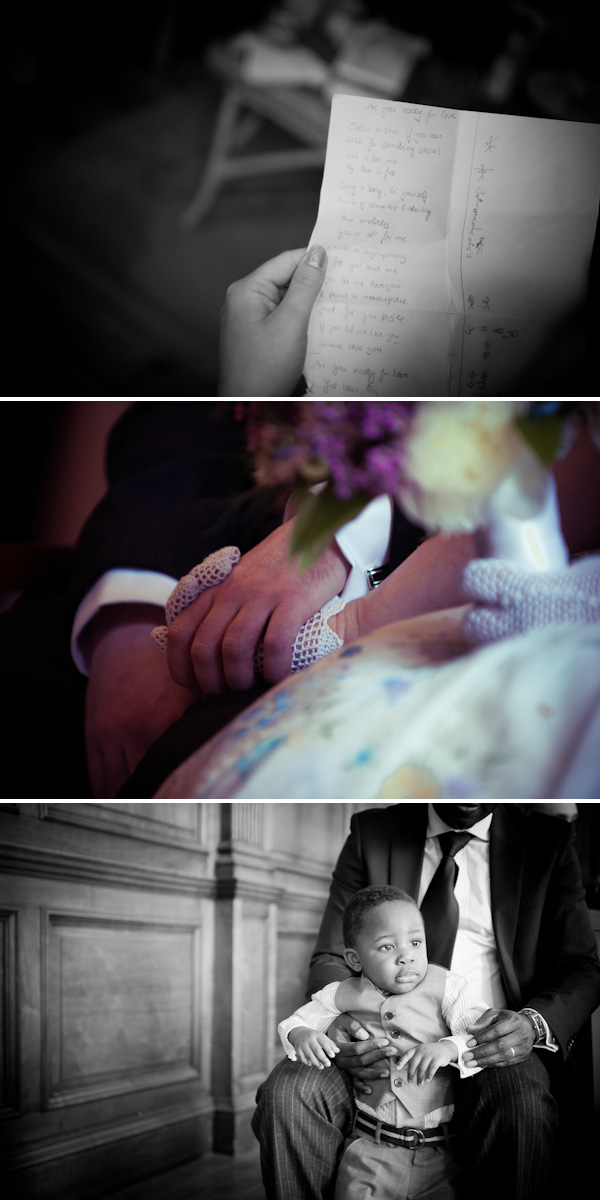 A nice touch weas that we were picked up from the ceremony by a 1960s style Red Routemaster Bus, which took us up to Dunsapie Loch (behind Arthurs’ Seat) for Pimms (provided by my mother as a little English touch) and a picnic, and we got back on the bus to arrive in style at the Royal College of Physicians. 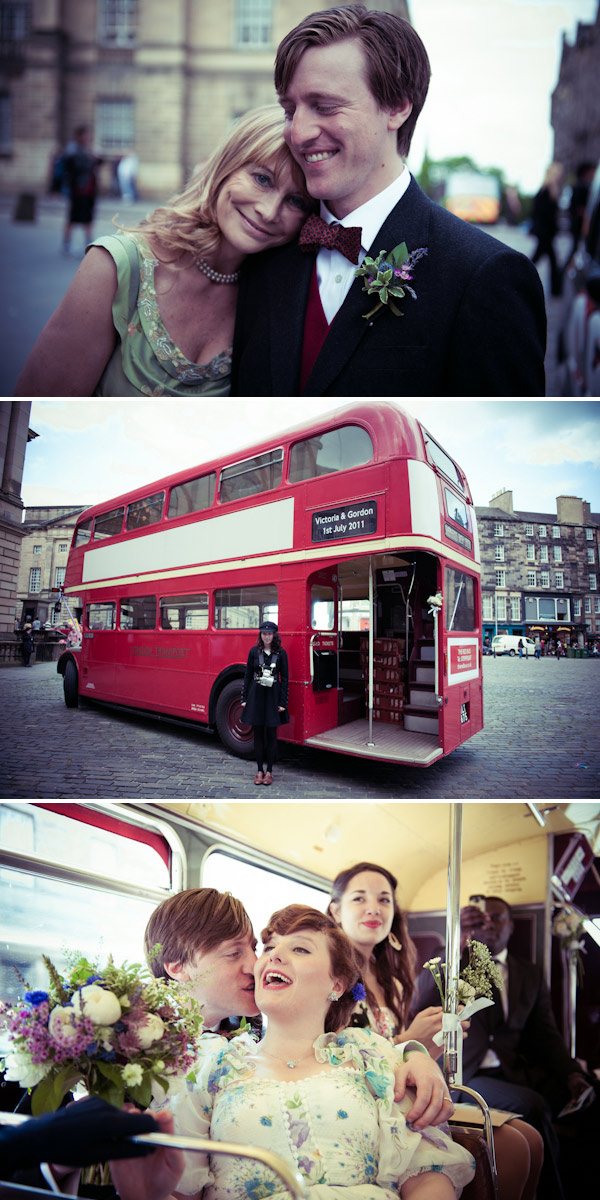 How cute is that frock?

In fact all of the dresses are delicious – as are the blooms.