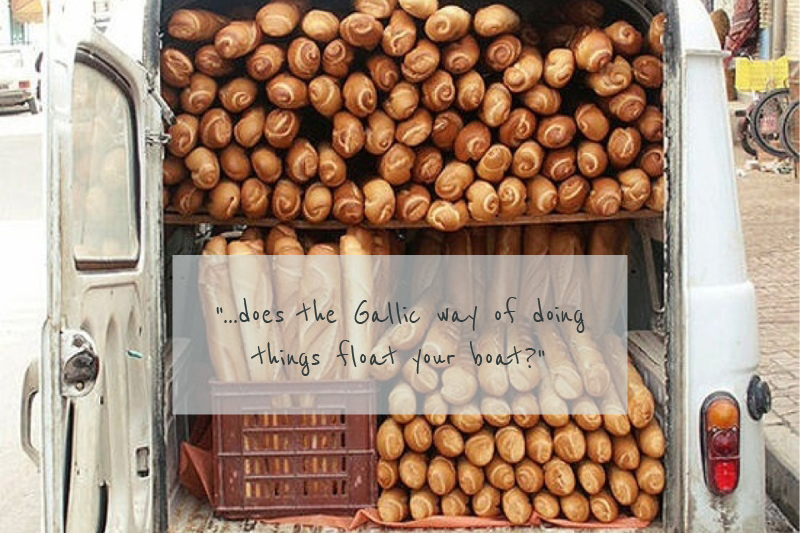 You may have noticed over the last couple of months that we’ve showcased a veritable display of French Weddings. From Cecile and Kevin’s chic Parisian soiree to Olivia and Marc’s dreamy provencal do, we’ve really been a little bit spoilt with all this loveliness.

Spoilt and inspired too…

Which is why this week’s inspiration post is inspired by the chic nation that is the French.

Rather than taking the luxurious route reminiscent of Versailles fashion, the moodboards below are suggestive of a simpler, more understated provincial charm.

Lighthearted and bright, ‘Les Belle Dames’ is all about adding a modern twist to elegant classics. Simpler silhouettes are the watchwords here with the look less about the volume and more about finely crafted materials and tailoring.

French brides prefer freer flowing fabrics with silk and crepe being the most popular materials of choice. Add a touch of lace draped softly over the shoulders and down the back and the look is pure elegance.

One or two key accessorises are all that’s needed to compliment the look. I particularly love a knotted veil, a string of small seed pearls knotted down the back or a delicate headpiece. Beauty looks are simpler too with a soft rosy hue and neutral eyes being the order of play.

Top off the look with a soft chignon or a loosely woven fishtail plait.

Campagne chic is all about looking as if you’ve spent a lazy Sunday afternoon at a Paris flea market and picked up a a few glorious finds in the process.

From forgotten watering cans to flaking washbowls and loved, worn tables, it’s all about finding understated charm in simple everyday objects. If this is your style then it’s so easy to integrate these props into your home decor after the big day is over too making them a real investment for your married future.

Props always help to really bring a theme to life; scrawl French phrases onto decadently shaped blackboards, prop up village bikes complete with baskets full of baguettes or opt for calligraphried invitations in a style similar to French script.

Channel Marie Aintoinette by creating salon styled seating areas for your guests using elaborate chairs, French cushions and sweet love seats. Finish the look like stringing reclaimed chandeliers from the ceiling or even from nearby trees.

I particularly love the idea of gifting padlocks to coupled up guests as wedding favours inscribed with their initials and finished with a ribbon flourish. Leave them a key so they can secure their love locks somewhere close to their hearts.

Did you know that it’s a French tradition to offer sprigs of lily-of-the-valley to your loved ones on May Day. Now that’s exactly the kind of tradition I adore so I couldn’t resist including a sweet posy of this flower as part of this moodboard.

If lily-of-the-valley doesn’t float your boat or if you’re looking to inject a bit of colour into your day then Lavender just screams French provencal charm. Try adding it to your table centrepieces to add both a visual punch as well as a beautiful scent to your surroundings. Alternatively why not place a few stems at each guest’s setting for them to take away as a keepsake of the day.

Try thinking outside the flowerbox when it comes to housing your beautiful blooms. Sourcing antique milk churns, bike baskets and old planters or even wrapping plant pots in brown paper and string are all fantastic ways of achieving this look. I particularly love the idea of a ‘flower table’ pictured in the moodboard above full to bursting with a myriad of different jugs, pots and vases. You can just smell those blooms from here can’t you.

Lastly, why not wrap the ends of your bouquet in antique French velvet ribbon as a subtle nod to your ‘something old’.

This concoction of pretty was influenced by an image that I’ve been cultivating in my imagination for some time. You see for me, a French wedding revolves mostly around the culinary delights offered at the reception so I wanted to recreate a scene that I feel epitomises a perfect Gallic knees-up.

Think rustic chairs and tables scattered outside under the trees adorned with mismatched plates of cheese and wine. Candles or festoon lighting providing the perfect amount of illumination and the prettiest of napkins to lay on your lap.

If you’re after a more luxurious feel opt for opulent chairs, exquisite tableware and lots and lots of flowers. Leaving gifts at guests’ settings adds to the luxe look too – squares of dark French chocolate, a exquisitely wrapped mini baguette or handmade soaps all work equally well.

More than anything it’s about creating an atmosphere rather than a specific look. If you’ve got the right ambience then nothing else really matters.

If there’s a nation that raise cakey treats to an art form then it’s the French.

You name it, they’ve made it – macarons, fruit tartlets, gateaus and the piece de resistance – the croquembouche. There’s literally something for everyone.

Why not serve small portions of gateau for dessert or even small fruit tartlets with a pot of lavender infused cream and a rustic napkin. If you’re looking for something that pushes your feminine buttons then choosing a sweet cake stand piled with macarons in candy shades topped with a bow is a surefire way to tick that box.

Presentation is just as much a key to this look as the savoury delights of your treats so allocate a portion of your time to styling the look. Garnishing the cakes themselves as well as their surroundings with florals in keeping with your wider theme is one way to do this; sourcing antique French cake knives and slices is another.

I love the idea of sourcing vintage cake knives for each of your tables, allowing guests to serve themselves whilst engendering that community feel at the same time.

Does the Gallic way of doing things float your boat?

Interestingly, I read an article not so long back written by the BBC which discussed how the French were looking to the Brits for inspiration for their big day. Apparently they like the fun and light-hearted elements that British brides incorporate into their nuptials and are beginning to emulate it themselves.

Who knew? If the beeb says it’s true then who are we to disagree…

All my love Lolly xxxx