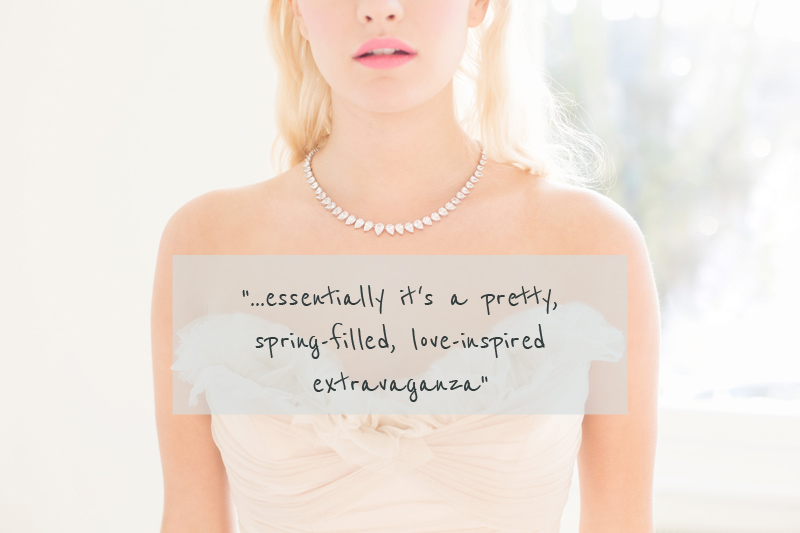 If you follow our Facebook page or my Instagram account then you might have seen some of our sneak peeks of our first RMW styled editorial of 2014. Not content with a gentle transition back into work after the Christmas break we decided to launch a new blog whilst simultaneously staging a sizeable shoot down in London.

No rest for the wicked eh?

I have a tendency to be a bit ‘serious’ when it comes to envisioning and styling editorial. I like everything to be ‘just so’ whilst epitomising grown-up glamour at the same time. My chosen colour-palettes tend to be muted and on the sophisticated side of the spectrum and I’m always drawn to wistful ponderous images as opposed to those about the lighter side of life.

Despite my confessions above I am a hopeless romantic and I adore Valentine’s Day (yes I know it’s a commercial gimmick) I just can’t help myself. And I love this time of year – full of the promise of longer days and sunshine and Spring flowers and lambs gambolling in the fields.

It made perfect sense then to make the first RMW editorial of 2014 a (personal) challenge, something unexpected, something carefree and girly and FUN.

‘Enamoured’ as we’ve so aptly named it is the result.

As always we love to share the inspiration behind all of our editorial shoots with you lovely lot before the grand reveal; the smorgasboard of delicious images below should give you a hint of what’s to come tomorrow afternoon.

Essentially the shoot was a pretty, spring-filled, love-inspired extravaganza. Think oodles of delicate blooms in pinks, greens and yellows. A girly feast of heart-shaped balloons, champagne and more shoes than you could ever imagine. And CAKE. Lots of cake. In the most delicious candy shades that My Little Pony would have been proud of.

I wanted petals and marshmallows and candy floss and glitter and love hearts and mini eggs and heart-shaped glasses and ribbons and shoes. In short I wanted to tap into how our six year old selves would have imagined their wedding day. With a touch of glamour on top of course.

From the off, I had very specific ideas about the beauty and fashion aspects of the shoot. I wanted a youthful bride – full of the joys of spring and not afraid to embrace her girly side albeit with a sense of humour of course. Think sleeping beauty crossed with The Powerpuff girls.

For the make-up palette I wanted bright dewy skin and flushed cheeks combined with colour pop lips topped off with a deliciously smokey eye and a tousled up-do to finish. We’ll be sharing some DIY beauty tutorials with you over the next two weeks so stay tuned.

From a fashion perspective it was all about the uber-feminine bride – for those girls looking to exude romance on their big day. We were also keen to focus on coloured gowns too – soft blue greys, soft pinks and champagne nudes. We enlisted the help of two Rock My Wedding Fashion Pack designers – Suzanne Neville and Naomi Neoh – to help us source beautiful gowns to fit the brief. The result is delicate lace, frothy fabrics and exquisite floral detailing.

Just wait until you see the beautiful pink tulle creation…

I don’t really want to give too much away at this stage on the decor and florals front but I will say that there were a plethora of heart shaped balloons, a champagne tower, beautiful crystal decanters and lots and lots of pink.

Oh and I nearly forgot the bathtub. Yes folks…a bathtub.

Honestly it’s the next big thing…

If you saw the last editorial of 2013 – The Fall – then you’ll know that we went hell for leather on the tablescape front. We decided this time to rein it in a little this time…snort who am I kidding?

No folks we can promise you two glorious set-ups that I think you’ll love. I won’t reveal all now but I will say that there are the sweetest treats including the most immense pink cake and SPARKLERS as well as eighteen cut crystal decanters and the prettiest plates you ever did see.

And I haven’t even mentioned the blooms yet.

Oh the flowers made my heart SING. And I really wish that all of you had been there just to smell their irresistible perfume.

Broom and tulips, blossom and narcissi, lithianthus and hellebores all collided to encapsulate the spirit and colours of Spring and love. Buttersoft pinks, delicate whites and sunshiny yellows literally lift every single shot that we took. They looked so delicious I wanted to bury my head in their velvety petals.There are centrepieces in abundance, beautiful posies, dainty corsages and oversized bouquets.

There is also a truly epic garland hung from a doorframe as well. I just know that you’ll fall head over heels for it.

And so we’ll leave it there until tomorrow to show you the results in all their glory.

Lolly is a self-professed frustrated florist and styling maven with an endless passion for all things pretty.
Tags:Pinks

16 thoughts on “Enamoured: The Inspiration”