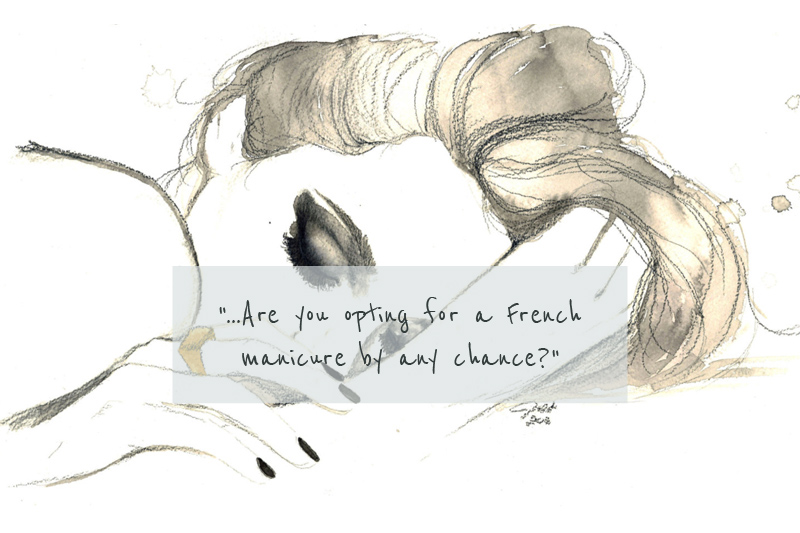 Not so long back we posted a gorgeous image of an ‘alternative’ w-day manicure on our Facebook page. It was all white gloriousness topped off with golden glittery sparkles and you lot went mental for it.

With over 30 shares and counting, numerous comments and approximately 150 likes, I think the post was one of our best received to date….and it got us thinking.

About you lot…. and your big day… and your nails.

Let me ask you a question.

Are you opting for a French manicure by any chance?

Don’t get me wrong lovelies – I’ve long admired the timeless chicness of this classic look but with the rise of the ‘your day, your way’ philosophy we wondered just how many of you were after something that’s perhaps a bit less traditional and a little bit more you?

Perhaps you’re torn, perhaps you’re feeling obliged to ‘go French’ because your mum or your gran says you should. But it needn’t be this way. Let me share something from my own personal experience with you.

I sported mid-length nude coloured nails on my big day and whilst they certainly looked the part and in no way offended me I so wished I’d stuck to my guns and had the soft velvety aubergine/charcoal grey tone that was my heart’s desire.

It would have looked chic, it certainly tied in with the Autumnal vibe that my wedding theme had going on but I was dissuaded from making such a bold choice by a stern manicurist who told me that this was not the colour for a blushing bride.

And so RMW-ettes, a compilation of perfect nail inspiration awaits you below.

What will you choose? 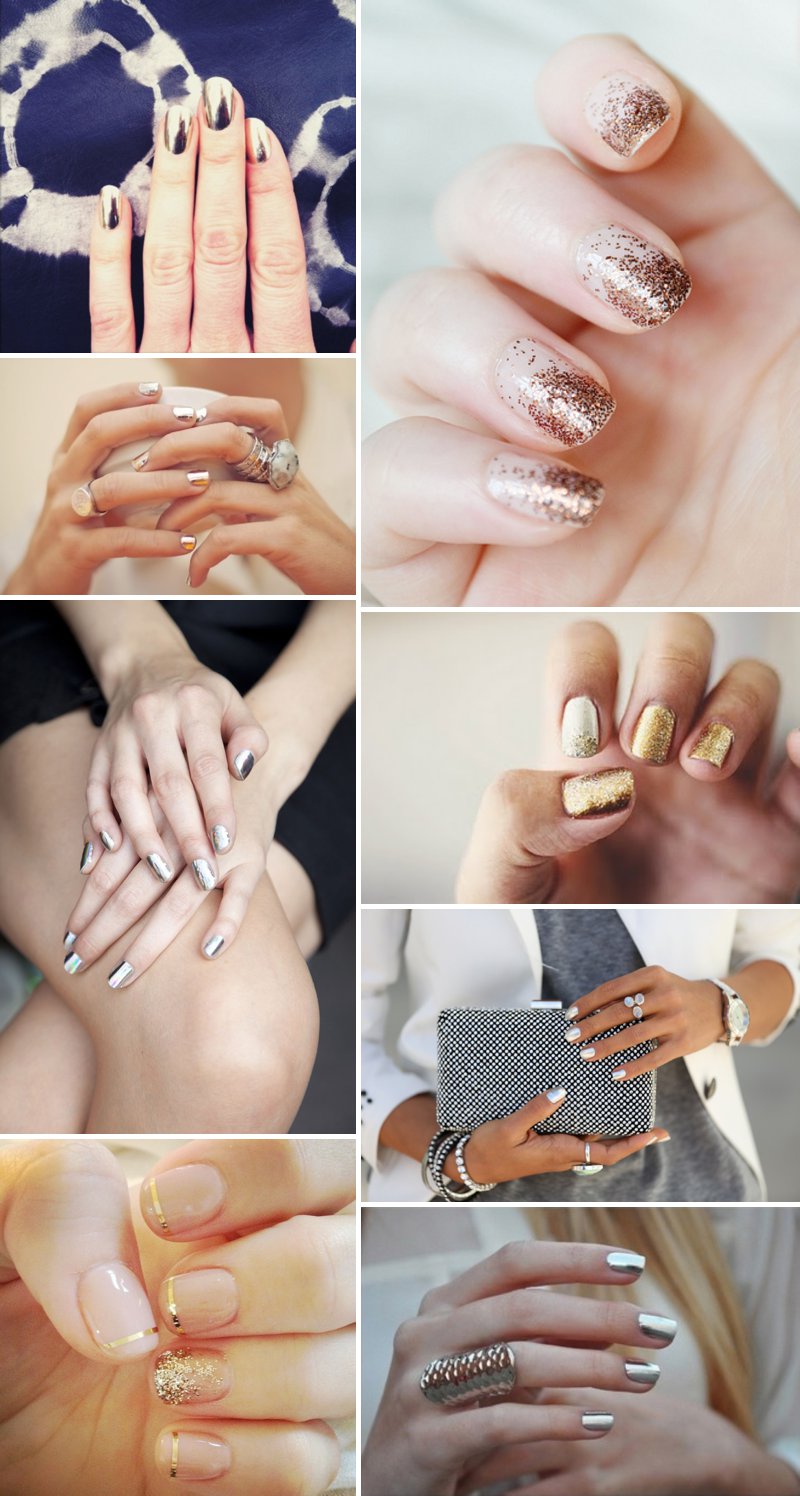 The irridescent, mirrored and metallic nail trends so beloved of last year’s brides continue to reign supreme. It seems that you lot are choosing to opt for iridescent fingertips for a more contemporary look. We’re talking everything from a full-on on metallic gloss, sci-fi style, to neutral backgrounds with glitz overlaid on the top for a more subtle effect. I particularly love the thin lines of nail tape (yes I know actual nail tape!!) overlaid on a neutral background at the bottom here.

If you’re not feeling brave enough for patterned or metallic nails or sense that these looks won’t quite look right against your dress or floral posy then why not opt for a colour block nail in the neutral or monochromatic shades of the spectrum. Team RMW is currently crushing on Chanel’s Frenzy shade due in part to its oh so chic tone and mostly because it reflects our state of mind on any given day.

If you’re really keen to take things up to the next level then it could be worth experimenting with a matte topcoat – both Chanel and O.P.I offer this product as part of their wider polish ranges. 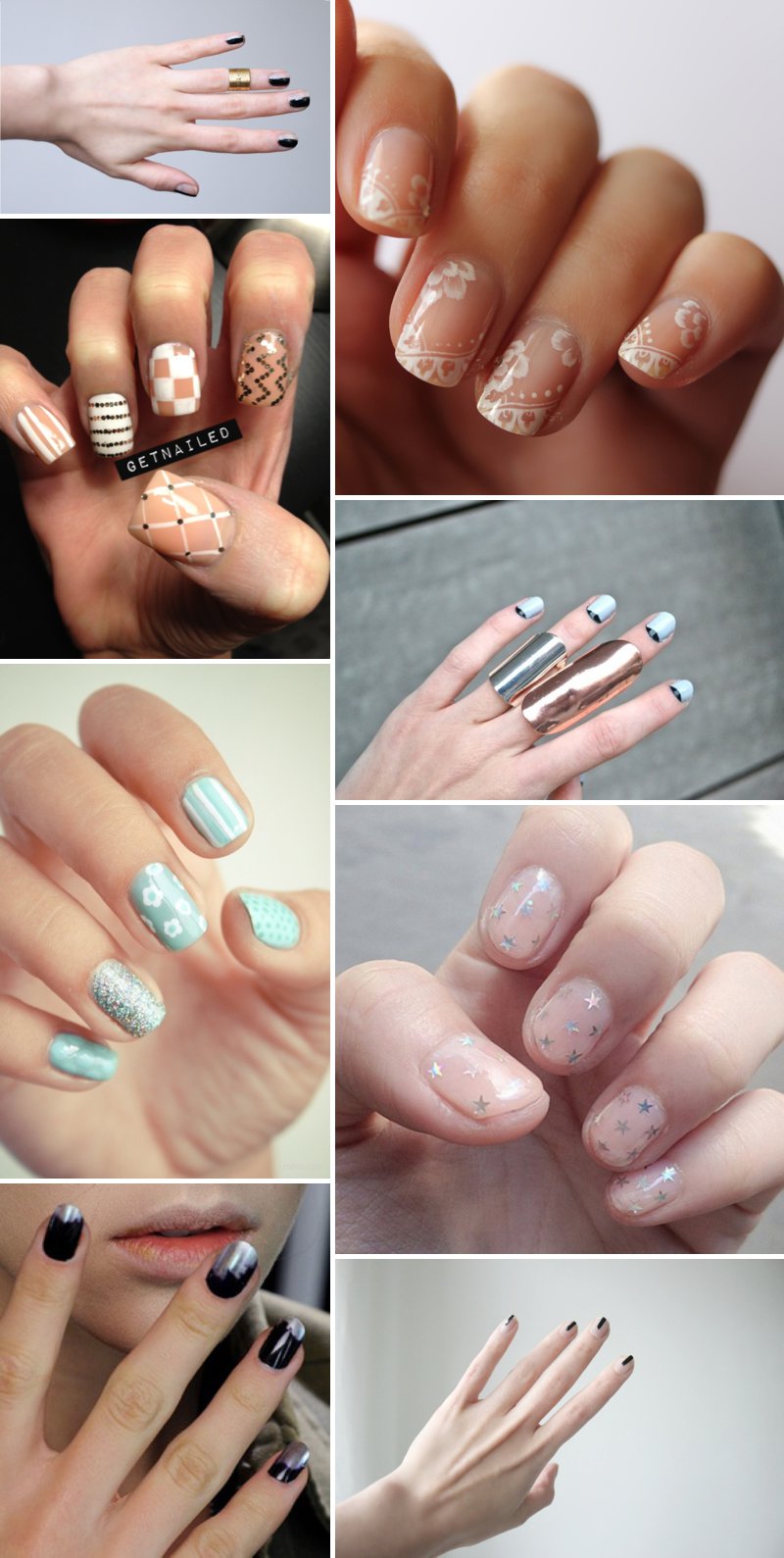 When it comes to applying nail varnish I have the patience of a gnat which means that any variation on the conventional block of colour is a no-go. That said I love seeing spots and stripes, chevrons and florals on brides’ nails and I can’t resist the ombre watercolour effect like the silver and smokey black combination at the bottom here.

Perhaps my favourite look is the soft white nail floral transfer at the top of this board. It’s as if gauzy lace has been applied to the nails themselves – a perfectly modern bridal look I think that even your nan would approve of.

And lastly it’s all about the ‘bright lights’. From turquoise blues, vivacious violets, breezy corals and seductive scarlets, this look is for the bold, fun bride that isn’t afraid to pack her punches. I particularly like a rounded mid-length nail paired with bright hues – it keeps the whole look contemporary and neat.

If you love the idea of colour but are perhaps a little fearful of it overwhelming your outfit then why not daub the tips of your nails in the colour of your choosing over a neutral base. That way you’ve got the best of both worlds and you can’t say fairer than that.

If you’re looking for more nail inspiration or some gorgeous beauty looks for your big day then why not check out our Beauty board on Pinterest or our obsession with sequins and shiny things.

We’d love to hear what you think.

Lolly is a self-professed frustrated florist and styling maven with an endless passion for all things pretty.