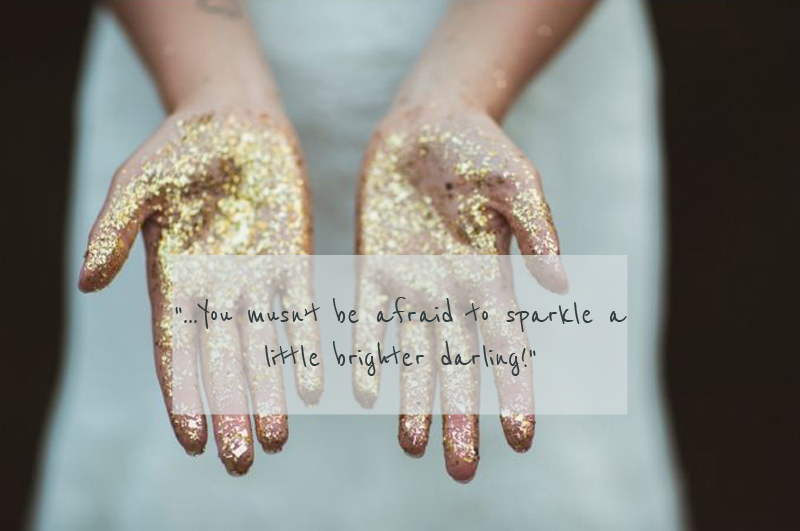 Whilst this post is technically entitled golden, it is by no means restricted to the aureate hues. Oh no folks, we’re not restrictive here at RMW HQ, we love any type of glittery embellishment, be it silver or gold, mercury or sequins, sparkle and glitz.

In fact we love it so much that much of our last editorial shoot was swathed in some sort of metallic glow. Did you see the swing….how about that supersized frame or the immense beauty looks?

Of course you did. Who am I trying to kid? And yes we were so thrilled with your enthusiastic and flattering response that we wanted the party to carry on a little longer so to speak …hence today’s inspiration piece.

Those of you who have been reading the blog for a little while now will be familiar with my personal obsession with all things shiny. I think the pinnacle of said obsession can be dated back to a certain school ski trip of mine where my bestest girls and I devised the genius product that is ‘Clitter Glitter’. The clue is in the name folks…a sparkling tool to help the uninitiated menfolk around the female anatomy.

Unsurprisingly ‘Clitter Glitter’ never made it into production but I’d like to point out that we were well on the scene before vajazzling made itself known.

Anyway I digress, let’s get back on track shall we and start with some golden girl fashion.

Oh to be a golden girl, hell just to be dressed head to toe in sparkles.

There’s something about shimmery sequins and metallic fabrics that speaks to the princess/ballroom dancer/six year old in all of us. Remember that glitter hairspray that you used to put in your hair for a night out? Yes? Bet you’re wondering just how acceptable it would be to wear some now? Is it retro enough to get away with it in 2013? I reckon we can….

The fact remains that glittery glamour makes our hearts sing – where white wedding shoes were once the order of the day, delicately sequined shoes now rule the roost. And it’s not just sparkly heels that you lovelies have your hearts set on either. We’ve noticed that golden and silvery wedding dresses are becoming ever popular too with dress designers such as Elie Saab and Sarah Seven including some exquisite examples in their latest collections.

It’s not hard to see why, for a shimmery gown instantly elevates any woman to super-hot vixen status. I’m not sure why that is but suddenly you walk a little bit taller, your hips swing a little more jauntily and your eyes SPARKLE.

f you’re not convinced then it’s worth thinking about putting your maids in sequins and metallic beading instead. Be it a 1920’s style flapper dress, a short suit or even a shiny skirt with a more sedate top half I’m positive that they’ll thank you for it.

I’ve said it before and I’ll say it again….you just can’t beat a glitzy, metallic eye for the instant glamour factor. In fact, I have been known to smear a bit of the old golden dust across my eyelids when I’m experiencing a beauty low and it always peps me right back up again. And given your enthusiastic response to last week’s beauty in our ballet inspired editorial post it seems that you lot can’t get enough of the shimmery eye either.

But there’s a practical element to the glitterific beauty look as well; it suits ALL skin tones and instantly bestows bambi-esque qualities even on those that aren’t so blessed in the doe-eyed department. You can be sure then that should you go for this particular style on your big day, then both you and your maids will all look fabulous.

I particularly love all over shine but if you’re feeling on the timid side why not opt for a cat eye slick of eyeliner in black and gently brush glitter over the top for the finishing touch. Using the right brush is the key to this look so invest wisely girls. The iridescent cat eye is eminently wearable in the daytime too so I’m daring you to wear it to the office. Choose a golden palette for yellowy and darker skin tones whereas silvery shades look best on those with paler skins and redheads too.

If you’re still not convinced then why not consider ‘dressing’ your hair with metallics instead. I find a messy chignon accessorised with an alice band of supersized sequins or costume jewellery irresistible. Alternatively try wrapping a diamante headpiece around a side bun for the more traditional touch whilst nodding to the glamour at the same time.

‘You musn’t be afraid to sparkle a little brighter darling’ is exactly the sentiment to apply to your big day decor. Think gold, think glitter, think bright lights and shimmer. And then add some more to boot. In fact there were so many gorgeous examples of wedding day decor following this aesthetic that I had to create not one but two moodboards for you lovely lot.

If you’re choosing to have a champagne reception or better yet a cocktail hour, why not add a touch of the exotic by serving your drinks in gilded saucers. For a start it will make your fizz really sparkle and make your guests fell special too. If you can’t get your hands on the gilded variety then opt for plain instead and vamp the rims up with edible glitter for a cost-effective alternative. Accessorise with glittering drinks stirrers such as these heart shaped beauties at the top here or pompoms for those young at heart and you’re away.

I’ve yet to see or plan a wedding that uses sequin encrusted tablecloths in their wider wedding decor but I’m waiting on tenterhooks for the day that it does appear because it looks so darn gorgeous. Almost instantaneously you’ve got a dollop of glamour in a way that plain white linen can’t even begin to compete with.

I’m also having a bit of a moment with gold spray paint – I’m blaming Adam and his golden swing – so I’m constantly looking for new and exciting things to gild. So far my absolute favourite has to be architectural branches and leaves which look amazing when used as chic centrepieces. Little tip for you….if you’re going to try your hand at some golden branches then it’s worth painting them white first. That way the spray paint will adhere more efficiently to the branch and you’ll end up with an even coverage.

Lastly how immense is that golden arrow. There are no words folks. No words.

So will you be integrating a bit of sparkle into your big day? How about the odd sequin or two?

I’m currently trying to persuade one of my besties to ‘go gold’ for her New Year’s Eve wedding and I’m definitely making progress folks.

Lolly is a self-professed frustrated florist and styling maven with an endless passion for all things pretty.
Tags:Decor |This Is Glamorous