Ok, prepare yourself (maybe grab a mug of tea and a biscuit). Are your ready? Ok…

Claire and Sheilen got married on a traditional Chinese junk boat with red sails. It sailed around Hong Kong Island and then dropped them off at the reception venue, a converted Pawn shop (now bar and restaurant) called The Pawn.

If that isn’t enough to make you want to read on then I don’t know what is!

The celebrations started with cocktails, photographs by Nick Tucker and games on the roof followed by dinner downstairs in the dining room. Then Dancing! 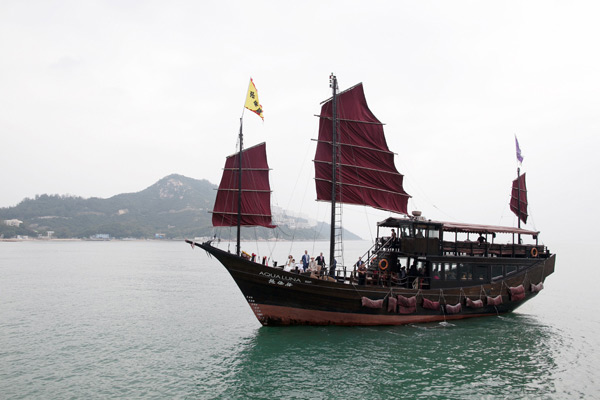 Finding a dress (and also finding a suit for Sheilen!) was probably the hardest thing about the wedding! It’s so much pressure on one outfit to be this miraculous “one”. I must have tried on around 20 dresses in every shape or form and I had magazine and blog overload! In the end I had to write myself a checklist of things I wanted my dress to say. The tick boxes for me were something cool, sexy, relaxed, with a vintage vibe (since we were going down a colonial heritage route with our venues) and it was always going to be white. 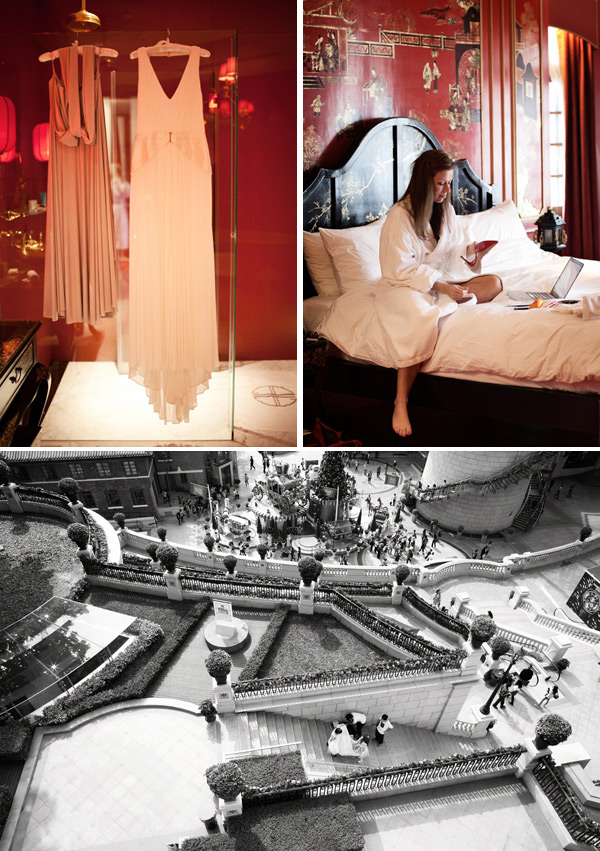 The HongKongese have merged western wedding style with Chinese weddings so there are a lot of shops here selling traditional white gowns, the only problem is the women here ae a lot smaller than the UK and the sample sizes ranged from size 0 to size 4! After squeezing into many vera wangs etc I ended up buying my dress from Amanda Wakeley on a trip to London. I knew the Wakeley dress was the one for me because when I put it on the way I was moving around in it was different.

My posture changed and I really felt it. It helped my mum loved it too. The hardest part was trying to work out if Sheilen would like it, because really this is the only opinion that mattered to me, but of course I couldn’t show it to him and he didn’t want to know anything about it at all!

Because I wanted to maintain a more laid back vibe, I didn’t go for any accessories or jewellery except for a single gold band bracelet from Kate Spade. I also bought my bridesmaid a matching bracelet as a gift. I debated adding a veil but in the end I decided to let the dress speak for itself.

Well when else is a girl more justified to splurge on a pair of amazing shoes than her wedding day! Hong Kong is also the perfect place to shop for expensive shoes! It was a close contest between some white satin pointy-toed sling backs from Manolo Blahnik, some gold strappy Jimmy Choos and some nude coloured christian louboutin shoes.

I worried the strappy shoes would edge up hurting for such a long day and that the white shoes wouldn’t match my dress colour, so I went for patent leather, nude coloured, pointy toed, 10cm heel christian louboutin shoes. The pointy toes and nude colour elongate your legs so it was perfect since my dress had a large split up the front. I had to get 10cm heels which is very high for me because when my dress arrived it was slightly too long!

Me, But More Awesome

I was really conscious for my wedding look that I wanted to still look like me. Of course a much more awesome version of my daily self, but I mean I didn’t want to lose myself with wildly different hair and make up to how I usually look. I wanted to be myself and to be able to look back on my photos and just see me as the way I am, not dressed up as a “bride”. So for a few months I tried out hair with a few stylists and make up with a few different make up artists but in the end I just wasn’t feeling like me.

The make up was always to heavy or too “bridal” and the hair would have too much product or too much curl, so after long debate with my bridesmaid the day before I decided to do my hair and make up myself. On our wedding day it was sooo windy that our hair got blown all over so it was lucky we went so simple with just a few sections pinned off our faces. I applied more make up than I usual for a day time as I was also conscious of the photos but it was very natural overall. 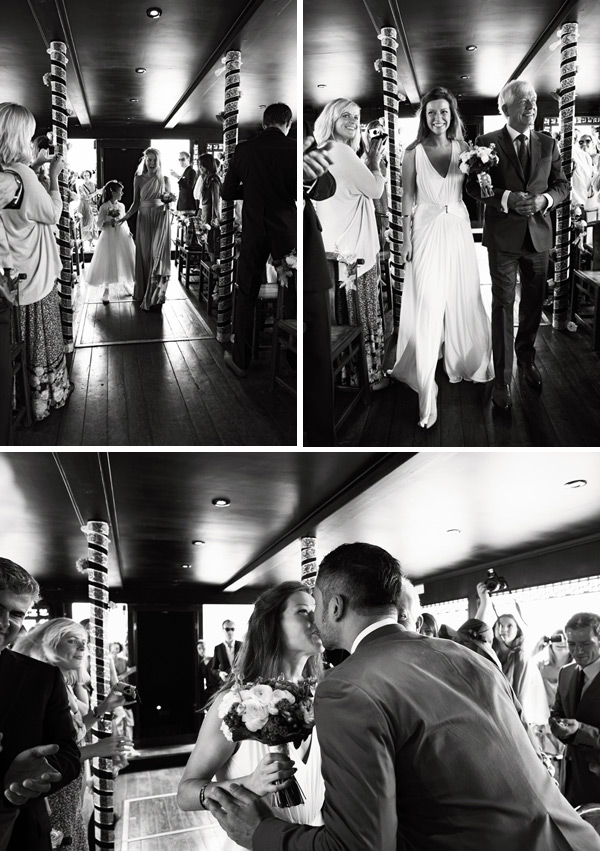 I tried not to be too prescious about it because I didn’t know what we would get in season in November and most florists couldn’t tell me the flower names in English of what would be in season so it was tricky to plan. As all flowers here are imported from all over the world it turns out there is a lot of choice. I was so excited I found blue delphiniums which are my favourite flowers.

We wanted something very simple, wild and messy which is not something they do easily in HK for weddings so we decided in the end to do it ourselves for the reception. For months we collected a lot of coloured glasses and vases for the tables. Then day before the wedding I went with my mum and mother in law, to the flower market. and bought (as many as we could carry) white, orange and blue flowers.

For our bouquets and button holes we went to a professional because we thought they could make something properly to survive in the heat. We opted for variations of hydrangeas which I knew was risky because they don’t last long out of water, but they lasted through the ceremony and most of the reception before they started wilting so it was no problem because by then the jackets were off and bouquets tossed. My bouquet was blue, bridemaids white and organe and the button holes orange and white.

Our colour story was loosely blue and orange. We didn’t want everthing too matchy matchy so I got my bridesmaid a champagne coloured two birds dress from shopbop. She was in Australia so we had to choose something online I could pay for and ship to her. The dress was perfect and she looked amazing, almost too good in fact!

Sheilen is probably the only person I know more indecisive than me so it took a long time to choose the suits. He decided he wanted them all to match but we had a logistical problem of the best man in Leicester, the father of the bride in Newcastle and him in HK. The tailors here are amazing though so they managed to cut the suits and fit in a week, so all of the men were in blue cotton suits.

Everyone knows Sheilen loves his bright colored shoes and he didn’t let anyone down on the day, wearing orange (his favourite colour) suede Tricker shoes. They were a cool contrast to the blue of the suit and totally him. He looked very dapper.

Part Of The Team

I’ve known Nick Tucker for years from a time when we both used to work with street art. Over the years I’ve seen him grow as a photographer and also shoot more and more weddings. He always shoots the coolest weddings, so after we got engaged we kept looking at his photos for inspiration.

His pics had set the bar high for our photographer search out here, but when we found out they are even more expensive than the Uk, we joked about just getting nick to come out and do it. So I asked him out of curiosity and he said he’d love to do it, I was blown away he was really coming out here and I was so excited he was hopefully going to make our wedding look more amazing. As he was here for the week we invited him along to all our wedding events including the stag do. He has some hilarious photos of that day! 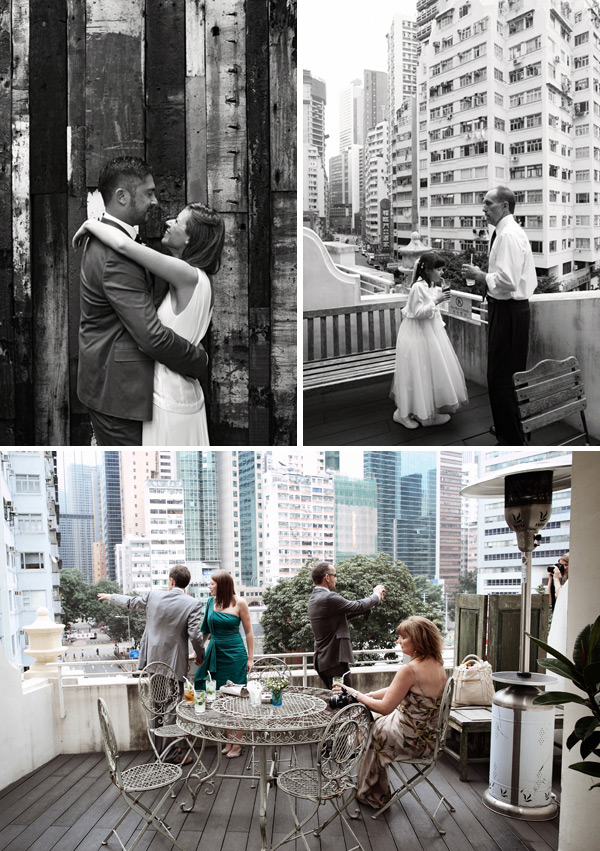 The cake was so low on our priority list because we couldn’t remember the cake from any wedding we’ve ever been to. So we just ordered 3 cakes, plain sponge, carrot and choclate, with white coloured icing from the baker in one of the supermarkets and we made our own little banner for the top of the cake. Then we bought 3 different height cake stands for them.

We were so lucky to find our wedding singer Hayley. One Sunday we were in an Australian bar watching the Rugby and when it finished this singer came on and she was simply amazing. Hayley’s sound was very indie, but she was singing everything from lady Gaga to blur, just her and her guitar. We were dancing and singing and then we realised she’d be perfect for our wedding so we asked her if she would sing for us and she was genuinely excited to do it. She even learned a few new songs in addition to her already 250 long song list for us. Her 2 friends came and played persucssion.

Our first song choice wasn’t significant to us at all. This is one of the stupidest things about the wedding. All the songs we like are not really appropriate for the first dance, when we actually listened to the lyrics they’re mostly about break ups. Then the weekend before 2 friends came to stay with us and we were sitting on our roof top having drinks, listening to their itunes when “give a little bit” by Supertramp came on. I love that song, Sheilen also asked straight away what it was and I knew my step dad would approve, so at that moment it was chosen.

Months before the wedding I saw some cool decorations on a blog, the strips of fabric hanging from the ceiling. I thought they looked easy…… but no. They took weeks, involved many trips to the hot local fabric markets and made such a mess of our apartment that I almost abandoned them half way through. However they looked so gorgeous in the end I’m happy I persevered with them.

Besides the quirky venues in an exotic vibrant Asian city making our wedding pretty unique, we also wanted to make our ceremony very personal. We wrote the whole ceremony ourselves including some funny vows in the middle, such as me promising not to nag and Sheilen promising to do the washing up. It relaxed the tone and made everyone laugh.

I think the thing that made our wedding so perfect was that we were really relaxed and we made sure we spent quality time with all of our guests. Weddings are all about people enjoying themselves and most importantly the bride and groom so we had to say to ourselves what will be will be on the smaller details. If anything goes wrong or we forget anything who cares, we had all of our family and friends there and that’s what matters. I think because we were so laid back then everyone else was and the vibe of the day was perfect.

Erm… Wow. Some of the coolest photo’s ever, do you agree?

This was one of those weddings!