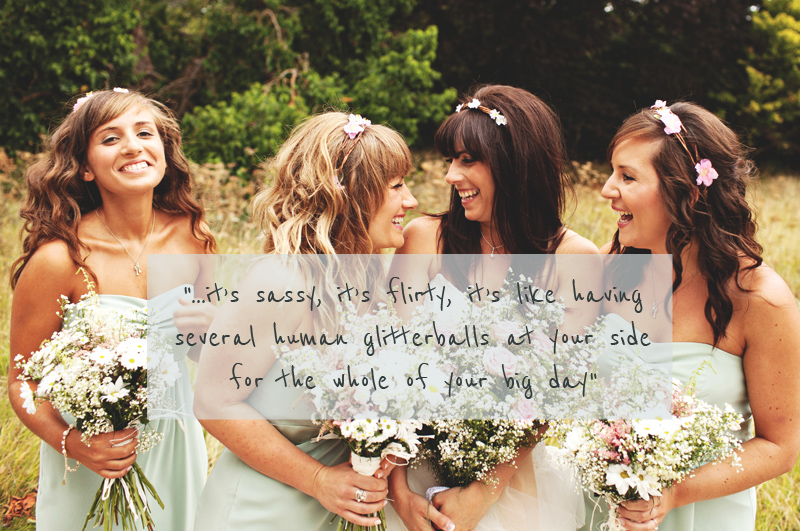 It seemed only five minutes ago that I was writing this piece about bridesmaid trends and sartorial advice for your big day.

Given that it’s been nearly a year since the aforementioned blogpost, I thought it was about time that I sat down and shared my latest musings about the hottest and most popular bridesmaids’ looks for 2013 and beyond.

Mismatched maids and ombre colour palettes are still ruling the roost but we’re also seeing the emergence of some new trends too and this makes me happy. The more choice that you lovely ladies have the better in my opinion. After all it’s all about having your day your way.

I’d love to hear what you girls think. Will your maids be channelling any of these looks on your big day? Perhaps you’re in a bridesmaid fashion rut – maybe I can help…

Let’s get cracking then.

Poppy, blush, peach, the faintest tinge of tangerine all the way through to apricot – the coral crush palette is so versatile that it can be interpreted in so many ways. And girls, right now, this is the colour of the moment both on and off the catwalk.

It’s modern, it’s slick and coral toned frocks will sure as hell pop against your ivory hued gown. Admittedly some of your girls might be a little intimidated by the vibrancy of this shade but there’s no need to fear. For you see this is a trend that harmonises perfectly with the ombre effect so beloved of last year.

Fair headed ladies look their optimum best in lighter tones – blush pinks and the palest corals, whereas girls with darker manes are able to carry off the more intense hues too. I’d also recommend keeping footwear neutral but if you fancy vamping it up then metallic tones are the way to go.

Of the maids that I’ve seen sporting this look, I’ve noticed that their bouquets have been kept discreet and have been composed of white, ivory and and blush tones. I’d really love to see a coral crush girl with a blousey posy of the pinkest peonies – there’s nothing quite like a colour clash to make a statement now is there…

I’m actually delighted to see that modern day brides no longer succumb to the fear that their best girls will outshine them on their big day. Instead we’ve seen a whole heap of gorgeous maids in chic frocks that wouldn’t be out of place at a cocktail party.

And why the hell not.

This particular style looks most effective in a monochrome colourway – be it the softest ebony or the starkest ivories but there’s no reason why it wouldn’t work in navy or hunter green if you wanted to introduce a bit of colour.

This particular style looks most effective in a monochrome colourway – be it the softest ebony or the starkest ivories but there’s no reason why it wouldn’t work in navy or hunter green if you wanted to introduce a bit of colour.

‘Chic and Sweet’ looks just as effective in longer lengths as well as with knee length frocks; the look is minimal with the barest of accessories and compact florals. The beauty look should be polished with dewy complexions and longer hair is best swept up into chic tousled chignons. Finish off with a dash of pillar box red lippy.

Using monochromatic shades is not only incredibly flattering but is a surefire way to imbue your day with a distinctly modern edge too. Perfect for those brides hosting a contemporary city soiree through to the most luxurious cocktail extravanganzas.

It’s sassy, it’s flirty, it’s like having several human glitterballs at your side for the whole of your big day but my golly it’s fun.

Sequins seem to be the order of the day lately; even the high street seems to be falling over itself to nab a slice of the action and the French Connection dress at the bottom here is proof that they can do it well. This can only be a good thing if you’re a bride (or bridesmaid) that doesn’t want to venture down the traditional maid sartorial path.

Perfect for Christmas or Winter weddings (it’s party season after all) but there’s no reason why you couldn’t sport the glitzy look at other times of the year either. Hot Metal looks best utilising the mismatched trend too – it adds variety and prevents your maids looking like one blocky wall of sparkle.

I particularly love the mixed up metallic pencil skirts with the lace blouses in the middle – it shouldn’t sound like it should work but it looks immense.

Sorbet Shades is a slight variation on last year’s Bohemian Rhapsody style in that colour has made its way into this particular trend albeit subtly.

We’re talking lemon yellows, blush pinks, creamy caramels and tantalizing taupes; ‘Sorbet Shades’ is the ultimate in feminine. This look works best with longer gowns although shorter frocks can be beautiful too. A truly successful ‘Sorbet Shades’ maid is one that is decked out in a gauzy fabric that flutters in the wind.

The beauty of this bohemian inspired trend is that it caters for everyone – be it body shapes or colourings – since its effectiveness lies in variety. Different prints, hues, lengths and styles; there really aren’t any rules.

Accessorise with plenty of blooms – floral crowns look wonderful on Sorbet maids as do clutches of unruly foliage and wild flowers. I also love the pairing of the silk frock at the top here with the orange leather belt so don’t be afraid to make your ultra girly frock that bit edgier with some well chosen accessories.

So what’s your favourite?

Are there any maids’ trends that you simply can’t stand?

Are you a bridesmaid that’s going to be sporting one of these looks later this year? I’m lucky enough to be a ‘Chic and Sweet’ maid later this year on New Year’s Eve no less!

Excited doesn’t even begin to cover it.