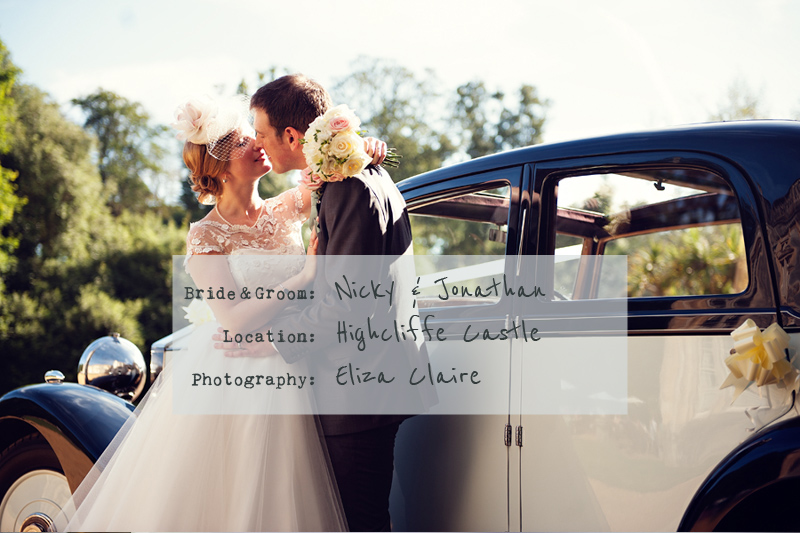 And Jon certainly cares for Nicky. Jon put up with Nicky’s one and only bridezilla moment and trusted her instinct, which was demanding to have photographer Eliza Claire capture their day. And how glad are we that she stamped her feet a tiny little bit and got what she wanted.

There’s a Candy Anthony dress, pom poms, a seriously stunning venue and even a bit of beach action.

Happy Monday all. I know you’re going to enjoy this one.

Nicky The Bride: We got married on the 8th September 2012 at Highcliffe Castle in Highcliffe, Dorset which is near Christchurch on the south coast. We had a civil ceremony and I walked down the aisle to Elbow ‘One Day Like This’.

My dress was from Candy Anthony. I had seen shorter 50’s styles and utterly fell in love with them. I also had always loved the movie ‘High Society’ and imagined getting married in a 50’s style dress, just like Grace Kelly at the end of the movie. I loved the variety that they could provide in such a simple dress shape and when I tried on the rose lace overlay I knew it was perfect. The ladies at Candy Anthony were so helpful, warm and friendly and we had great fun at my fittings.

Having a 50’s dress I really wanted a bird cage veil and some sort of hat/headpiece/flower type thing to wear during the day. I was put in touch with a milliner called Bundle Maclaren by a friend. Bundle was fabulous and designed me a one of a kind head piece with detachable veil. She helped me to work within my budget and I just loved the resulting piece.

In the evening I swapped the headpiece for a knitted flower I made myself. I wore earrings from Glover and Smith. I had a bracelet with a Blue John stone set into it which my sister (Jenny, my chief bridesmaid!) gave me on the morning of the wedding. Blue John is a semi precious stone, which is only found in one mine in Derbyshire, near to where our grandparents are from so it was very personal. I had a beautiful string of pearls which Jon gave to me to wear and a family heirloom ring with sapphires and diamonds (which was my something old, borrowed and blue!). I loved the effect of a few small, subtle pieces which were all very personal and had real family meaning. I felt like I carried a little piece of everyone with me as I went down the aisle.

I went for a relaxed up do, which went well with the style of dress and headpiece. Similarly for my make up I don’t usually wear much so I was keen not to look like I had been tangoed! Laura at South Hair really understood what I was going for and helped me to create a natural look with 50’s eyeliner and plenty of (very subtle!) false eyelashes. I also had my lashes tinted a few days before so that there would be no panda eyes!

Shoe wise I went for white and silver Irregular Choice shoes with a big flower on the toe. I love their funky designs and they are so comfortable, plus I have already worn them again as they aren’t specifically ‘bridal’. In the evening I swapped into a pair of flat, two toned swing dancing shoes which I have had for years but they are perfect for a spot of Lindy Hop (more on that later…)

My flowers were provided by Jules Florist. There had to be roses – my maiden name is Rose so that was a definite. My bridesmaids all had white bouquets of one single flower (freesia, roses and hydrangea) while my bouquet combined all three flowers in a mixture of pinks and whites. The freesia and roses made everything smell gorgeous! Our table flowers were large displays in giant martini glasses (as a nod towards our love of cocktails!) which looked sensational. The chaps all had roses as their button holes- all the grooms men in white and Jon with pink.

We decided early on that we wanted a relaxed feel to our big day and one of the main decisions to help support that was to go for lounge suits for the chaps rather than tails. This nearly caused one of the major arguments of the whole planning process as my dad was dead set on tails. However after some gentle explanations that tails wouldn’t be happening we bought grey suits from Moss Bros. Jon wore the same suit/waistcoat/cravat combo as the rest of the boys but he had shoes and shirt from M&S and as a present to all his grooms men he bought them all matching Pantone socks to go with the cravats. He looked so gorgeous as I walked towards him up the aisle and I was so proud to be his nearly wife!

Our colour scheme was my favourite colour – duck egg blue with pinks and whites so we had our bridesmaids in a similar colour dresses to the boys cravats. These were from Monsoon with home made sashes and more knitted flowers.

We found Eliza through Rock My Wedding and she was the cause of my one and only (to my mind anyway!) Bridezilla moment. We both loved her style and really wanted that beautiful light that she captures in our photos. Her colours are always beautiful and we really clicked with her ability to tell a story. We spoke to her on the phone and she said that she also had another couple interested in the same day that she was speaking to on the phone from Australia the following day. At this point I decided we had to have her there and then and insisted on putting down a deposit IMMEDIATELY without meeting her. My family thought I had flipped but the thought of not having her do our photos was awful! She was a god send on the day itself, actually helping me into my dress as well as being a font of wedding knowledge! Having seen our photos now I know that I did the right thing by stamping my foot just a little!

I set my heart on a naked tiered Victoria sponge cake with fresh flowers on it, which I thought really worked with the relaxed feel we were going for on the day. Then Jon’s Aunty and Nanna offered to make us a fruit cake so we were utterly spoiled and went for both! It was great to be able to offer a choice for the more traditional generation (my Nan was insistent that it just wouldn’t be a wedding without a fruit cake!) and a lighter option for those who aren’t a fan of fruit cake (or marzipan, those crazy people!) Both cakes were brilliant and we topped off the fruit one with a knitted bride and groom which I made and customised to look like us. 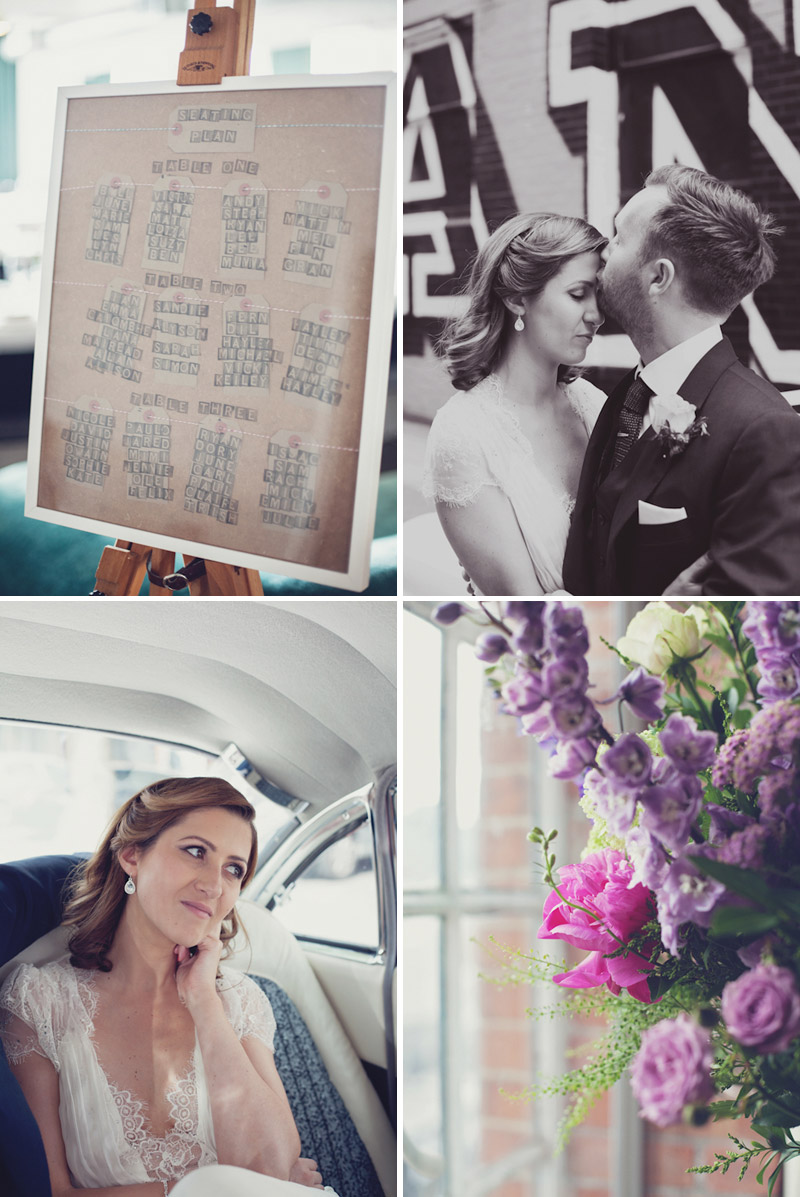 In the evening we had a 17 piece swing orchestra – Swing Unlimited Big Band who are a local group and were just fantastic. They got everyone up and dancing with a mixture of traditional big band and swing mixed in with some really funky tunes. Our first dance was to ‘My Baby Just Cares For Me’ which was great to Lindy Hop to and one that the band could play just like the original Nina Simone track so we were able to practice at home beforehand. I did some swing dancing at university so it was important to me that we did a little bit of Lindy on the night. Jon and I went to a few lessons and I was so proud of him. All his family kept commenting that they didn’t know he could dance!

We really wanted to give our guests a little bottle of spirits each to make cocktails with but when we looked into it, it would have been so expensive. So we bought empty 50cl bottles and corks from eBay and filled them with home made Sloe Gin and tied name tags to each one with ribbon. On the reverse of the tags was a cocktail recipe to use the gin in! We also gave out vintage hankies to all the la-dies at the ceremony and had hand made napkin rings too. We really wanted to show our family and friends how much they mean to us and felt that a few little touches like this could do just that. Besides, we thought if there were loads of mini sloe gins left that wouldn’t be a terrible thing for us but in fact there wasn’t a single one left behind!

We went a bit nuts in Ikea buying candles which went on every available surface, ditto with pompoms (which I made with some help from a tutorial from Martha Stewart) for the dancing room but they looked fab. We hired two big nets of fairy lights for one wall of the dancing room too, which really gave a great atmosphere to that room which otherwise might have been quite plain. Drawing on Jon’s creative talents I really want to mention that he de-signed all our stationery bits – from the Save the Dates to invites to menus to order of ceremony. He created a font that we used for everything and that really helped to tie things together and make it look great and then hand drew loads of illustrations in pencil. Even our black cat Milly was there – we wanted to include her even though in reality she was miles away in a cattery! Jon now takes commissions from newly engaged couples!

I think it’s important to remember that this may be one of the very few times in your life when everyone that you love will be in one place at one time. That in itself makes the day brilliant so try to enjoy it as much as possible. Budgets are important too, when I fell in love with a pricey frock I committed us to doing as much DIY as possible but that really helped us to stretch our creativity and put as much of us into the day as we could. There wasn’t a single aspect of the day that we didn’t put a little bit of ourselves into and I think that made our day so special to us and one that we will remember and treasure forever.

So there you have it…our modern day Grace Kelly. It’s so inspiring to see and hear about how a wedding look came together. Nicky’s attention to detail with her carefully chosen accessories and ensuring she got just the right veil to compliment her dress gives me tingles. Everything looked so beautiful.

And isn’t that the softest looking bouquet you ever saw? Also, who spotted the use of bubbles instead of confetti? LOVE.

I’m now off to learn how to lindy hop.

Becky is at her happiest when dunking a slightly chilled chocolate digestive into a very warm, very milky cup of tea. She also loves her job and pinches herself every day to make sure that she isn’t in a graphic design dreamworld.
Tags:Irregular Choice |Groom & Groomsmen