It’s Fern here, before I pass you over to the lovely Sundari, I just wanted to say that whatever type of wedding you are planning – this is such a heartfelt, honest post that I think lots of Brides will relate too. It’s also a fascinating insight into a type of wedding ceremony I knew very little about, so grab a cup of tea and some cake, sit back and enjoy…

Hello everyone, me again. Hope you’re all having a great start to your year so far and getting all good to go for spring to be sprung! I personally cannot believe how quickly time is flying by.

So, over the past few months here on Rock My Wedding I’ve spoken in depth about our lovely suppliers, venues and style, which has all been mainly linked to our Sunday humanist wedding at Waddesdon Manor.

However, today I wanted I’d give you an insight into planning our Tamil Hindu wedding because I’m pretty darn sure there aren’t too many other blog posts that’ll explain them to you! I promise to try my best…

You’ve all heard of Indian weddings. They’re big, loud, colourful and lots of fun. Well, that’s all true, I’m not here to say otherwise however, I find myself correcting a lot of people that I’m not having an “Indian” wedding in fact, but a Sri-Lankan, Tamil, Hindu ceremony. Yes, that’s a mouth full, but it also very accurately describes what we’re having.

I’m of a mixed heritage, with my father from Sri-Lanka and my Mother of a Sikh Punjabi background from Malaysia, however I’ve mainly been brought up within the Tamil community despite not speaking the language. My parents both came over to the UK to study and funnily enough met at a Chinese New Year party during University. They had their own battles to fight when they chose to marry but are here today with two grown children, one married off and the other underway.

It’s easy to conclude Indian-Asian families are very proud of their heritage and I think it was always the deal that if you’re marrying me, we’re having a Tamil wedding. That was just the expectation. I’m sure if I felt strongly enough I could have altered how big it would be or not have it at all, but growing up with that pride instilled in myself, I also did want to celebrate my marriage to Andy with this traditional event.

Disclaimer!!! I’d like to point out now, before I dive into what our wedding will be, I am by no means an expert on Tamil weddings, I can only write about my understanding and experience in attending and celebrating them.

Sri-Lankan Tamil weddings are usually one day. There might be smaller religious ceremonies that happen before hand, but they aren’t part of the main event and are typically limited to just the immediate family.

The ceremony must be set on a “good” day and the “thaali” (the marital necklace) must be tied during a specific time during that day. Usually, the family consult with a priest to find out what days suit the wedding, along with the best time during that day for the “thaali” tying. This is what my family did, though depending on how religious you are, there are a number of other considerations that can be checked too. We just stuck with a good day and the “good time.”

The actual ceremony itself is hugely traditional, filled with religious acts, meaning and is spoken by the priest mainly is Sanskrit. So, to help with our non-tamil guests understanding, whilst in India I bought orders of service which explain to the audience each section of the ceremony. Though due to the noise and hectic nature of the wedding, most people won’t be able to follow it until the “crescendo” of the ceremony, which is the “thaali” tying, I keep mentioning. You still with me? 😉 Basically, it’s a ceremony, which lasts about 5 hours and includes snacks and drinks throughout as well as vegetarian meal for all the guests at the end.

In the beautiful images with this post you’ll see the marriage of Lavinia & Sav whom kindly sent in the pictures from their Hindu Tamil ceremony for yours and my viewing pleasure. You can see the colour, detail and sheer amount of traditional acts carried out. You can see the beautiful flowers, gorgeous décor and almost feel the chaos and noise of it all. So exciting!

Lavinia, arrives at the wedding in her light pink saree, after a few special prayers and acts, she goes off to change and returns for the “thali” tying in her gorgeous burgundy saree (the koorai saree) usually gifted by the Groom to wear for this special moment. Think of it as two wedding dresses, but the second one is especially from your man. The thaali tying is the pinnacle of the ceremony and all the acts before hand are building to this very loud moment. It’s similar to the exchanging of rings in a civil wedding.

I’ve spoken a little about the venue in a previous post, Painshill Park, Cobham. The key for our ceremony was having somewhere, which could fit a large number of guests, allow a fire inside the event space and are experienced with “Asian” weddings. Painshill offered all of this and even has held many Tamil ceremonies there before.

SO, HOW DO YOU COORDINATE A 350+ GUEST WEDDING?

Your heads are probably spinning from the sheer amount that needs to be organised for this event. So how on earth am I coordinating mine? Quite a daunting task but the honest answer…with a lot of help from my parents! Key things we had to book, a priest, a manavarai stage company, the traditional instrumentalists, vegetarian caterers, hair and makeup, outfits for everyone, traditional wedding cake…the list goes on!

Luckily a lot of the “traditional” bits, my Father stepped in, I had only a few things to research. I found the perfect staging company, Om Creatives, who were so kind, creative and a delight to work with. They’ll be covering all the decoration inside from the flowers, carpet, staging and more but because of our rather large guest list (might I add by choice!) we’ve had to grab in Academy Furniture Hire for lots more chairs.

For this event, it really is about the sheer amount we need to purchase to make sure everything ticks by smoothly rather than booking a long list of suppliers. The Tamil ceremony has a humongous list of things that we need to buy such as special coconuts, banana leaves, silver platters, a rose bush…Not to mention that we needed to purchase around 20 sarees for Andy’s family and friends to wear on the day. We hit most of the saree purchasing including my two marital sarees in India, I’ve added in a few iphone pictures to show off how many we bought. It really was all about the sarees!

With all the key suppliers booked, what is left is a long shopping list, but bit-by-bit we’re slowly getting through it. This weekend we’ll be purchasing Andy’s traditional outfit, which will be fun! 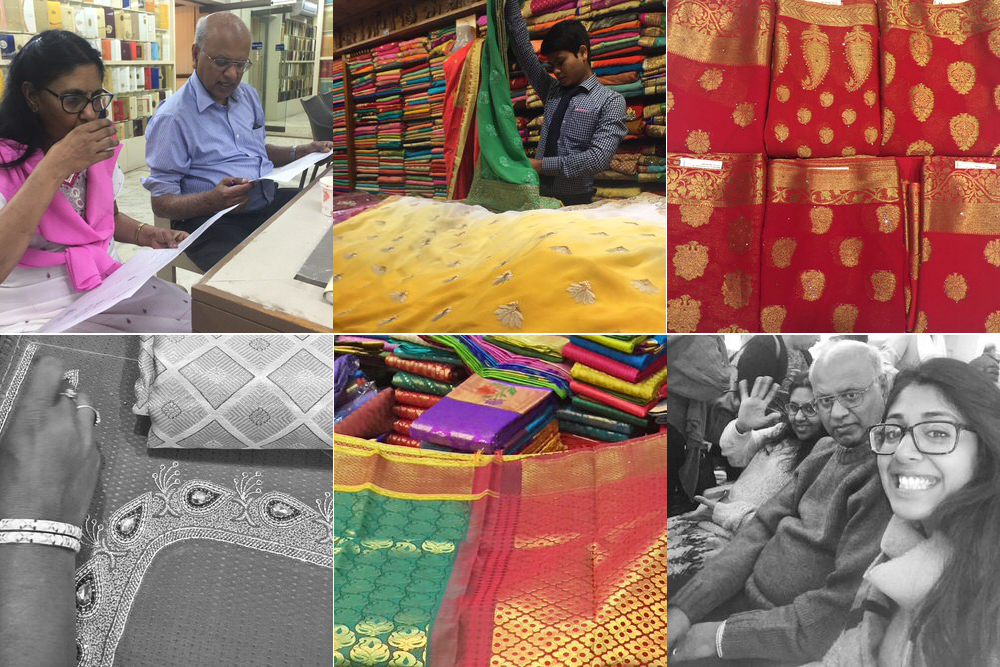 BATTLING WITH TRADITION or just my parents…

Wedding planning flags up the well-known tensions with parents. However, I feel like planning an Asian wedding is a whole different kettle of fish. The marriage ceremony derives from millions of years of long standing traditions and therefore many things are kind of “set in stone.” Also, having parents who were born in another country, with certain expectations, adds to this.

So simple things I’ve struggled with are decisions you’d think would take 10 minutes but end up taking much longer because of my parents desires. I’ve simply come to the conclusion that it’s just not worth the argument and learned to let them chose themselves. I have to say I’ve had the main important choices such as staging, flowers and even added a few special requests to the menu, but all in all, my parents really are running the show, which to be honest, I think I’m okay with.

What has been the most challenging is being a modern woman brought up in a western culture trying to plan a wedding with my traditional parents. I am part of the first generation to be born in the UK, so there is quite a strong tug and pull between their traditional values and my natural modern views. In fact, I’m even adding to the difference by marrying someone English. By being the first generation here I’ve been able to grow into quite the independent woman and like any child, head butt with my parents quite often. I think it’s the same with anyone. Parents being parents are from an older generation and quite naturally almost come from “another world” but adding in a different culture and the expectations that come with it, has complicated things.

GOING FROM THEIR CHILD TO A MARRIED WOMAN

So first and foremost, it’s a huge thing I’m getting married in the first place for me. Massive. One of the biggest steps, arguably, I’ll take in my life. I’m dealing with a huge shift in responsibility and out of the comfort zone that are my parents. I can only describe it as, REALLY leaving the nest. I may not live with them, but I feel very much attached to my parents who have been quite a huge part in my life.

There have been silly arguments along the way of planning, of course, but there is an almost a hidden significance behind those battles. It’s a growing time for both my parents and I. I’ve been faced by making my own life-changing decisions where I’d usually run to my parents to guide me (out of habit rather than requirement) but I’m slowly learning that I can actually make the decisions myself.

For me, it has spot lit the stark differences between my parents and I. Having grown up taking their advice on pretty much every element of my life but beating my own drum, I’ve noticed that getting married has suddenly been plunged me into the unknown territory of them struggling with letting me go and making my own choices without conferring with them. Now, I don’t want to come across as if I’ve lead a life without choice – I began my business because I wanted to; I didn’t pursue a career in Architecture, because I didn’t want to but with every choice, I’ve relied heavy on the approval from my parents. There’s a shift now, I now realise I can rely on myself and not feel the need to get advice or even validation from them. It’s very strange, sometimes scary but an exciting feeling, however I do worry about hurting their feelings.

Whilst it’s an “un-said” progression in changing from “their child” to a “married woman and adult” I already know the struggle my parents must be dealing with. I challenge them a lot more, which causes arguments or tensions I never meant to cause, but with this big step in my life I’ve never felt more empowered and can understand that there is balance between my choice and their advice.

So, for any bride out there, from any background, I’m sure there are a few growing pains but with a little patience, understanding and deep breaths, we WILL get through it, and come out the other side with a glorious marriage and a growth in relationship between our parents and us.

Sundari is getting married in 2016 with not one, but two ceremonies over two days – a Tamil Hindu ceremony & a Humanist ceremony. As one of the UK’s top wedding stylists – you just KNOW it’s going to be an extravaganza of pretty’
Tags:wedding planning |Hindu |planning