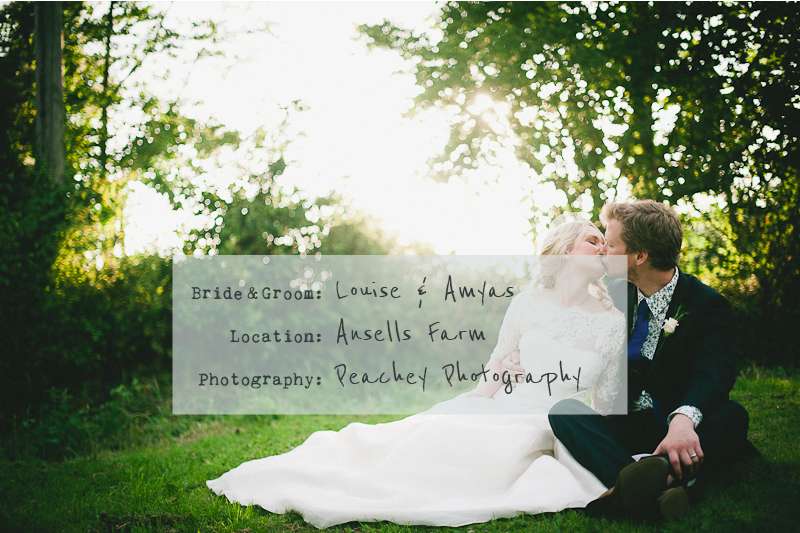 I ain’t go to lie to you (although I am going to use bad english). I’ve seen a lot of weddings in my time. A. Lot. Don’t get me wrong, we are spoilt for choice at RMW so they are all a bit special but occasionally one drops through the letterbox that makes you wish you’d known about it before the event… And that you’d had an invite.

Maybe it’s the fact that Louise and Anyas are both muso’s, maybe it’s the relaxed rustic charm, that Suzanne Neville dress and the way it swoops around the dance floor in the barn. And WHAT a barn… Seriously folks you are in for a treat. Katharine Peachey has really done the day justice with a beautiful set of images too. 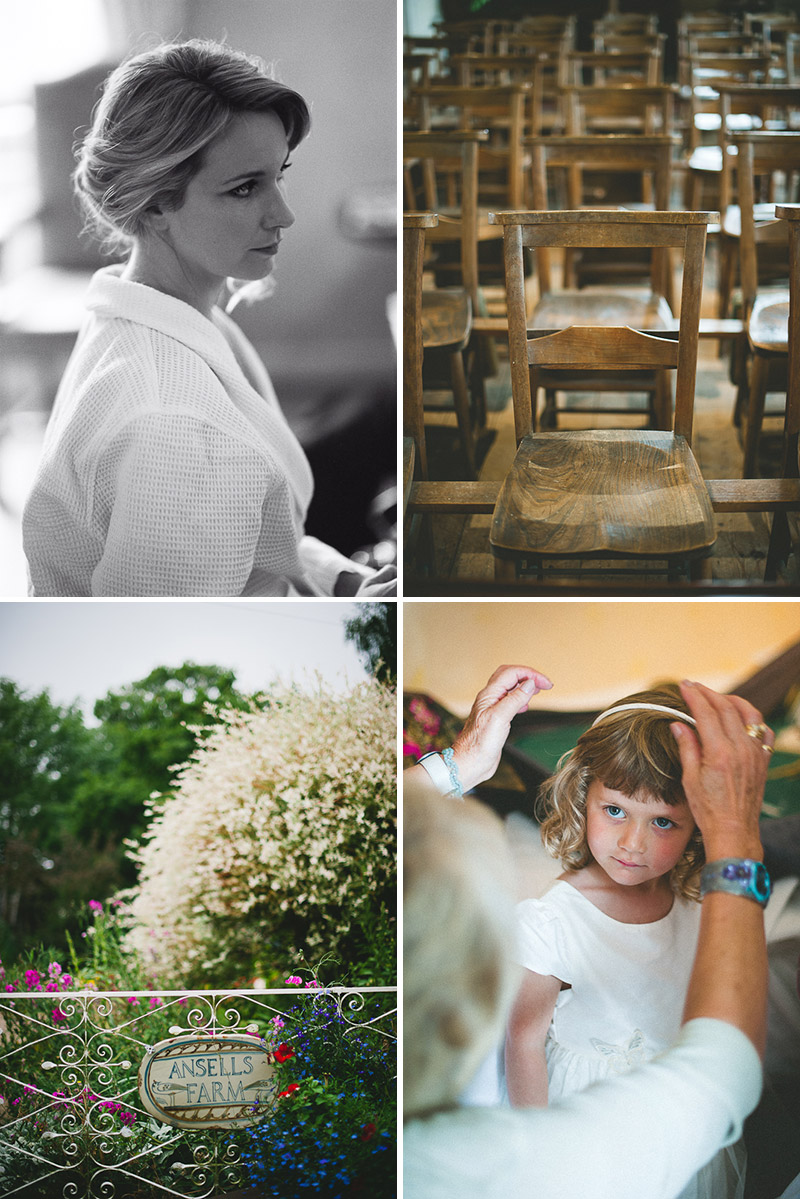 Louise The Bride: The venue was a very easy decision. Amyas grew up in a beautiful Suffolk farmhouse called Ansells Farm, and was christened in the local church where we got married. His parents, Stephen and Melinda, were kind enough to let us hold the wedding at their home, and were amazing at helping with all the preparations. Amyas’s brother even planted special flowers so the garden would look nice! We wanted to make sure all our friends could enjoy the day and not have to spend too much money, so we had space in the meadow for camping for those who didn’t want to stay in a hotel, with rows of tents that gave it a mini-festival atmosphere.

I was very lucky that my cousin’s wife, Sam Phillips, is an incredibly talented make up artist, and made me look fantastic on the day – as well as helping me with pre-wedding nerves! She does amazing eyelash extensions, which lasted for the whole honeymoon and meant that I could be lazy and not bother with make up for three weeks – totally recommended. 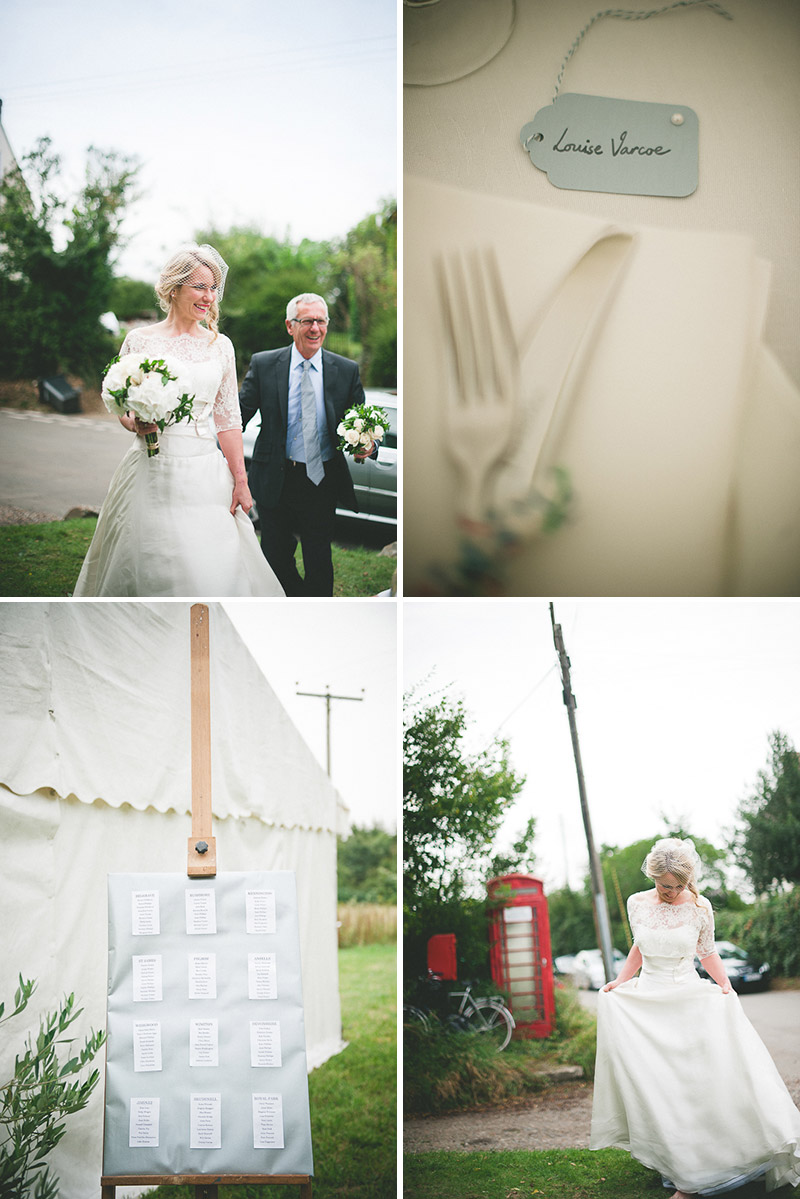 I have never had a perfect wedding dress in my head. I knew that I didn’t want anything too dramatic or extravagant, and that I wanted sleeves, but that was about it. A couple of weeks after we got engaged, my mother and I went to a sample sale at Ellie Sanderson in Oxford, who were lovely and very helpful. I hadn’t really intended to buy anything, but ended up with a Suzanne Neville dress which was perfect except for a rip in the skirt, which was fairly easy to fix. It was only ever going to be something I wore once, so I didn’t mind when it ended up with about three inches of mud at the bottom from running around in the fields and dancing all night.

My friend Charlotte’s mother, who is a genius at dress making, made my lace shrug which was my favourite thing about my outfit. I knew that I didn’t want to wear a strapless dress, and it was a perfect cover-up. I had a little birdcage veil—again from Ellie Sanderson and a pretty comb from Etsy. I did actually buy shoes, but ended up freaking out about falling over while walking down the aisle and left them in the hotel room, so I spent the day barefoot. And didn’t fall over once. 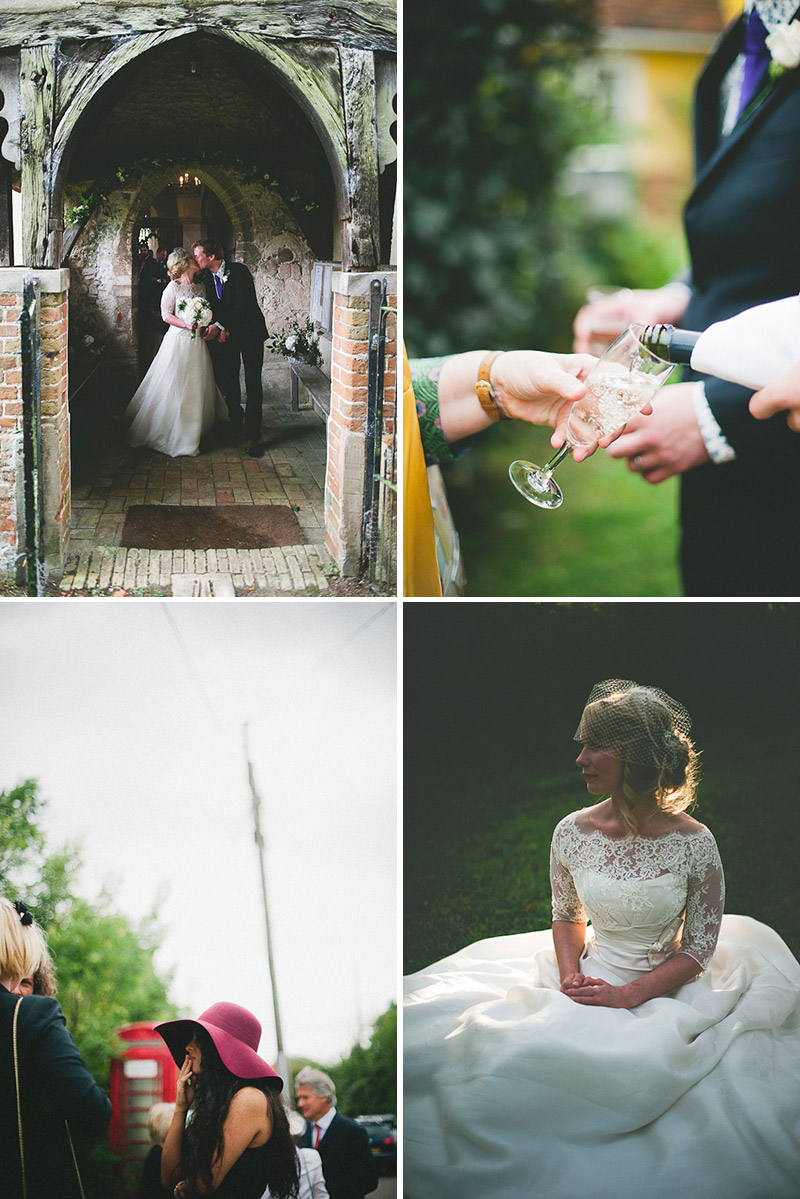 Amyas, who is very clever at making things, made cufflinks for his groomsmen, which looked fantastic. My mother went on a flower arranging course and learned how to make buttonholes, and each one had a rose and a sprig of rosemary, so they smelt nice too.

My bridesmaids, Sophie and Jasmine, chose their own dresses – these were from Next – and they looked absolutely gorgeous.

We didn’t really have a coherent “look”, so much as a series of little ideas. Amyas knew he wanted to wear a Liberty print shirt, so we used some spare Liberty material (left over from when I made cushions) to tie around the cutlery, which my very patient sister-in-law helped me do the morning of the wedding. I had spent seven months in South America after University, and Amyas lived in San Francisco in the Mission District, so we made papel picado – Mexican-style bunting – for the barn as a reminder of both of those. In a similar vein, we drank Cusquena from Peru and Sierra Nevada from San Francisco at the party. And our friend Sabrina helped us make tin can lanterns, which we put candles in outside.

My mother did an amazing job with the flowers – including going to Covent Garden Flower Market at 6am the morning before the wedding to pick them up. The bouquet was hydrangeas, roses and some beautiful purple mint, which smelled gorgeous. We had roses, hydrangeas, lavender and rosemary on the tables, and delphiniums in the church, which the best man’s mother and the wonderful ladies of Alphamstone village arranged.

We had a really personal ceremony, which I absolutely loved. I walked down the aisle to November Rain by Guns N Roses, which Amyas’s aunt Alison reworked for the organ. My friend Charlotte played the cello, and Amyas’s father, who is a professional opera singer, sang Roger Quilter’s ‘Drink To Me Only With Thine Eyes’, which was beautiful. My godfather Mark read ‘if everything happens that can’t be done’ by ee cummings, and Amyas’s sister, Oriana, read from Corinthians. Our recessional was ‘Toytown Trumpeters’, composed by Amyas’s late grandfather, the organist and composer, William Davies. 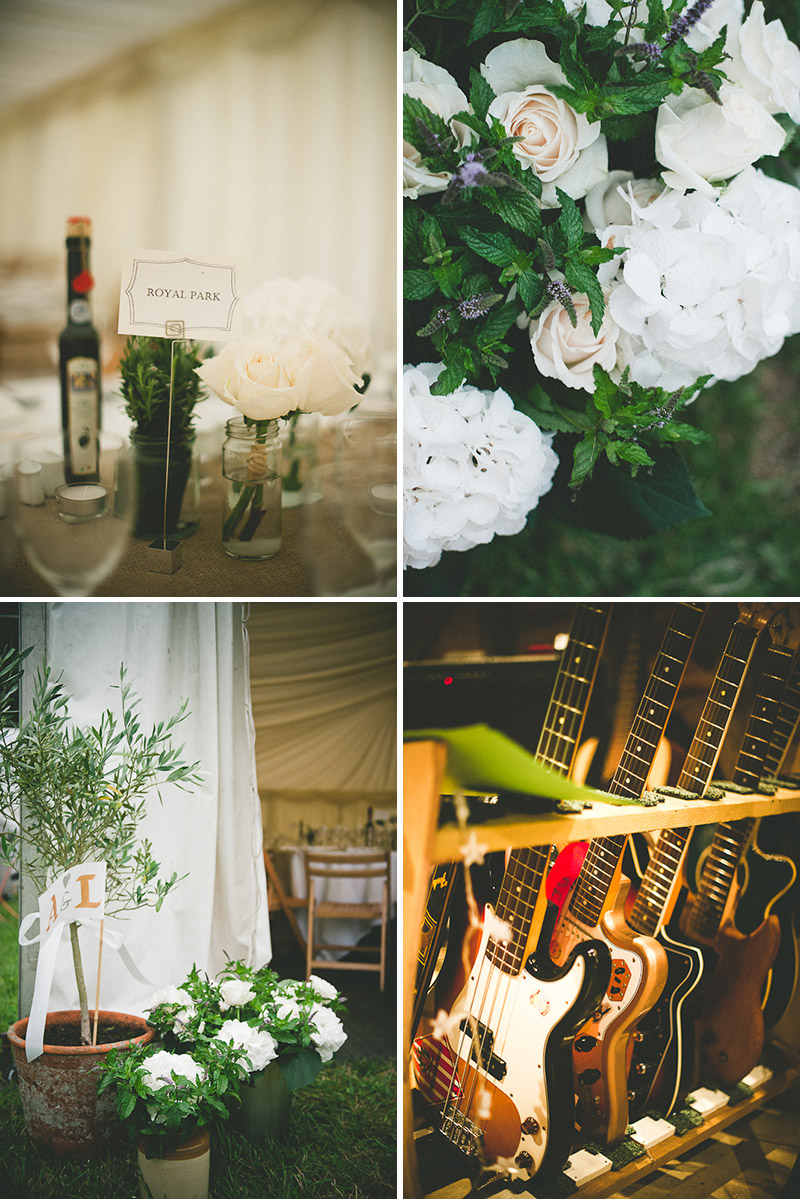 We both love music, and it’s really important to us – our eyes first met over the mixing desk at Leeds Student Radio.

Our first dance was Never Let Go by Tom Waits. Perfect for us – a bit rough around the edges but very romantic, which had lots of special memories, including our first weekend away together in Paris to see him play.

Our wedding band was awesome. We’re very lucky to have an incredibly talented bunch of friends, and we had performances from a rolling cast including members of The Medusa Snare, The Wednesday Club, Sarah Phillips, The White Keys, and T.O.Y.S. The band started with Imitation of Life by REM, and finished with Minnie The Moocher from the Blues Brothers.

I spent about six months writing down tracks we loved to create an amazing playlist for afterwards. I hope the rest of our guests enjoyed it as much as we did!

My friend Mei has a company called Foodilicious Cakes, and makes the best cupcakes you’ve ever tasted, so we had red velvet, carrot cake, vanilla and chocolate cupcakes to choose from. We wanted something that everyone would enjoy eating, rather than a traditional fruitcake.

We wanted to have a really casual, friendly atmosphere at the tables during supper, so each table had a leg of roast lamb from the farm up the road, and a dedicated carver to serve it. Everyone helped themselves from communal dishes, and sharing was encouraged! Gemma Haining stepped in with just over a month’s notice to do the catering after our first caterer cancelled, and was brilliant. The food was all delicious, and the whole process was very stress-free.

We had fabulous Italian wines from Selezione Zanotto – choosing those was a fun evening – and prosecco for the toasts. To reflect our shared love of San Francisco and South America, we drank Sierra Nevada and Cusqueña after dinner.
Instead of party favours, our friend Kath brought us a beautiful box of Romeo Y Julietta cigars back from Cuba – Winston Churchill’s favourites – which we shared with our guests in the evening.

Because we know our friends, and ourselves, well, we figured they’d stay up late. Amyas’s mum had the excellent idea of having some cheese and bread laid out after supper, for late night snacking by the ping pong table, which proved a very popular combination. The Lancashire Bomb went down particularly well.

Our friends and family were all so generous with their time. My uncle, George Foster, is a top graphic designer, and created our invitations for us, which was fantastic.

We named our tables after different places we’ve lived in, although that became slightly complicated when it came to trying to create a seating plan that incorporated old flatmates and friends from university, but I think we did a good job in the end. It was great to bring all of our friends together and see them all getting along!

I think that most people already have an idea about what’s most important to them. Be it the food, the wine, the music, the decorations, the photography. In practical terms, make sure you get your priorities in order and don’t be disappointed looking back and thinking ‘I wish we’d done this differently…’. But most importantly, I’ve been so happy since Amyas and I got hitched. I married my favourite person in the world, and while we had a killer wedding, it’s that that makes me smile every day.

See what I mean… Do you see? Completely perfect from the blooms (blooming brilliant work by Mother Of The Bride by the way) to the decor to the P.A.R.T.Y.

Throw in a selection of stunning portraits (check out the gallery for the full set) and you have something approaching wedding heaven.

Adam likes Pina Coladas and getting caught in the rain.
Tags:Suzanne Neville |Next