Sarah and Duncan married in June at St Mary’s church in the village of Hadlow in Kent. Right next door to Sarah’s parents’ house.

So, not only was Sarah able to walk to the church but she also had the wedding reception in her parent’s garden. We LOVE back garden weddings at Rock My Wedding and this one has a lot of love to give back too – In the form of severe wedding pretty. The bunting, the lace… check out those trestle tables in the Indian style marquee tents…

All of this beauty was captured lovingly by Lily & Frank. 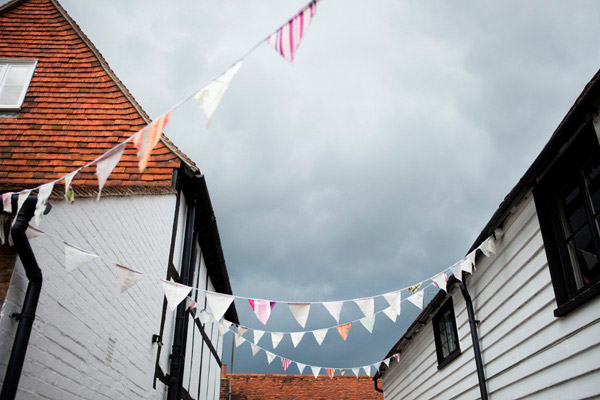 My dress was from Louise Selby who I met at the Designer Wedding Fair in Battersea Park.

I had in my mind that I wanted something with lace as I wanted something a bit vintage looking and not too “poofy”. Lots of Louise’s dresses were beautiful but the dress I chose just felt perfect and made me feel so pretty! As the dress was made for me Louise was happy to make alterations which included having the neckline made into a sweetheart neckline (the original was straight across) and having a waist band added. The dress was made from silk crepe and French lace from Calais. 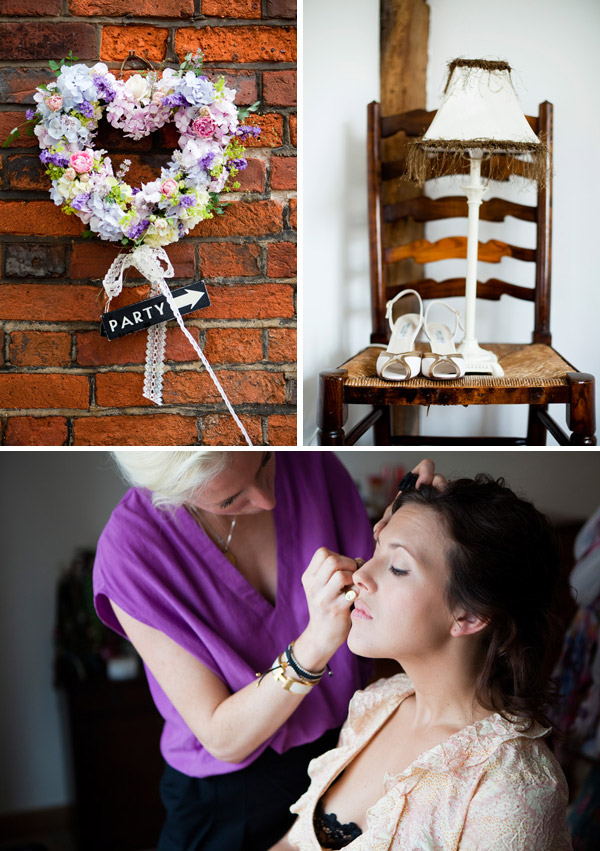 I wore a beautiful hair band from the lovely Emmy in Islington (who also designs shoes). Her studio is above Tallulah lingerie – which is where Duncan bought lingerie for me when we were first dating – spooky! I loved the vintage look of it and can’t wait to wear it again. 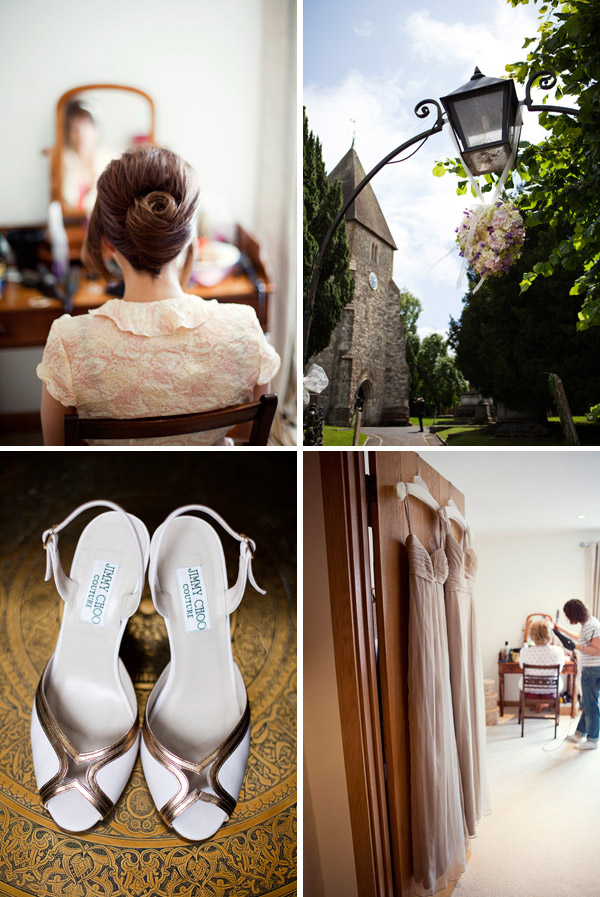 For my 30th birthday Duncan bought me couture Jimmy Choo shoes (i.e. the original Mr Jimmy Choo) – it was amazing to design my own shoes which included choosing the pieces of leather used – they’re very pale pink with a gold trim and, I think, timeless. They were never intended as wedding shoes but they were perfect! 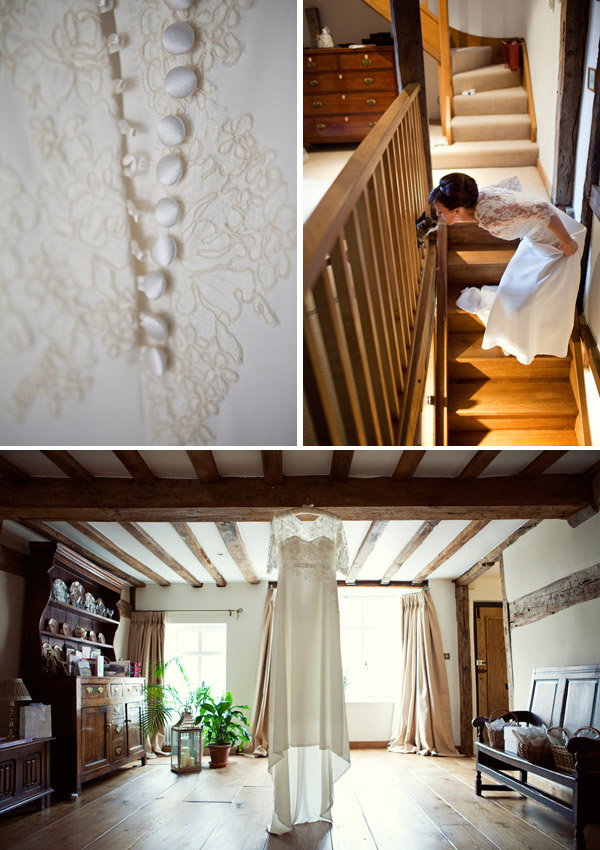 Given the location the theme was an English country garden wedding which lent itself to lots of vintage style touches and lots of lace to complement my dress.

I also wanted lots of lavender as I love the smell and the look (I think I was trying to recreate the south of France in Kent). We used a fabulous lavender farm near Hadlow called Downderry. They supplied us with beautiful lavender – including some unusual and very beautiful pink lavender. I had lavender in my bouquet and our favours were lavender themed. 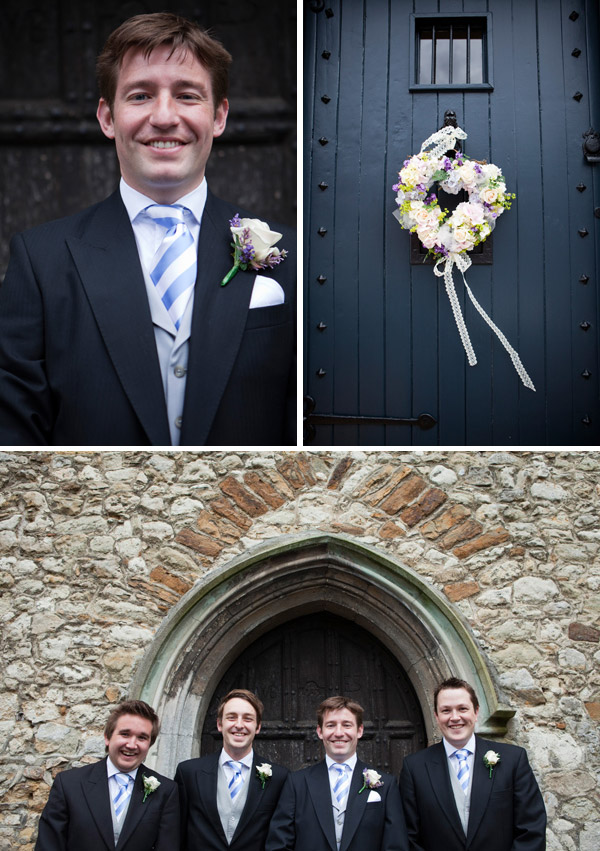 A truly lovely mother and daughter company called Butterfly Flowers did the rest. Tina and Jean totally understood my “vision” and turned it into an even better reality. My bouquet was incredible. It had avalanche roses, peonies, lavender etc and the handle was wrapped in a piece of the lace that had been used to make my dress. In terms of flowers for the reception we didn’t want anything too prescriptive and so there was a real mixture of mainly English flowers; peonies, roses, hydrangea, sweet peas, stocks and probably lots of others I can’t remember. I wanted something very natural in blues/pinks/ivory that were reflective of an English country garden i.e. nothing formal. We didn’t want overly formal arrangements either so we had mismatched vases on the table and even little sherry glasses that belonged to my grandmother filled with little flowers.

The bridesmaids dresses were made by Amsale, an American company who sells in the UK through The Dress Consultants. My best friend, who got married last year, discovered them (I still wear the bridesmaids dress I had for her wedding). The groomsmen hired but we bought them the ties – which I hope they still wear! 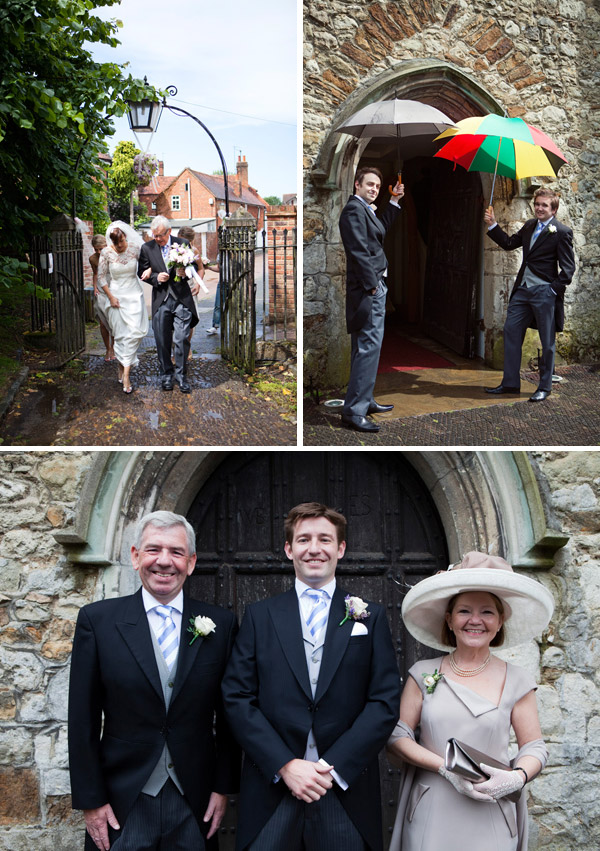 Duncan wore a morning suit from Hackett accessorised with his grandfathers FA cup winners medal from the last final won by Newcastle United in 1955. 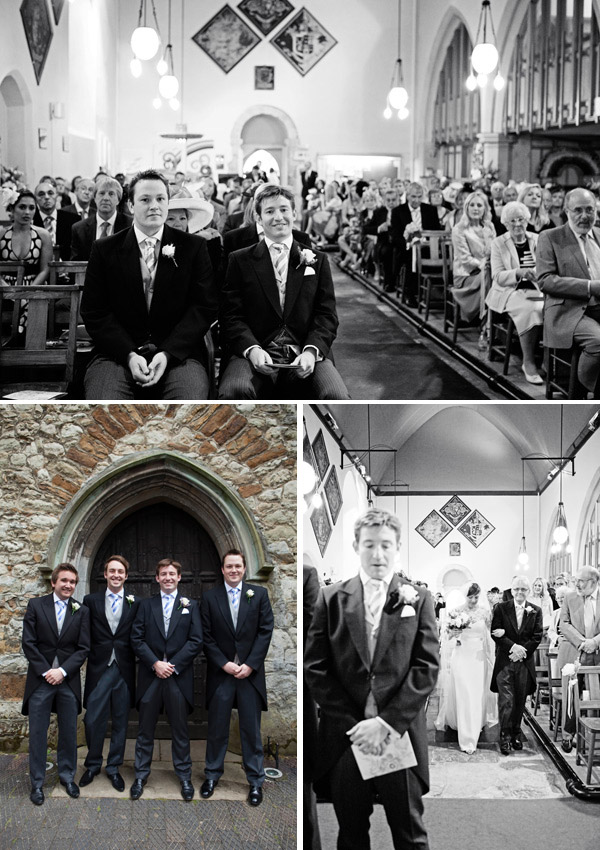 Catherine form Lily & Frank was our photographer. We love our photos and she was just the loveliest person to deal with. It was great to do an engagement shoot with her and we felt totally comfortable with her on the day.

The Icing On the Cake

My mother in law made the cake. She has her own cupcake and cake business called The Creative Cupcake Company. It was 3 tiers with one fruit cake, one chocolate cake and one lemon cake – something for everyone. 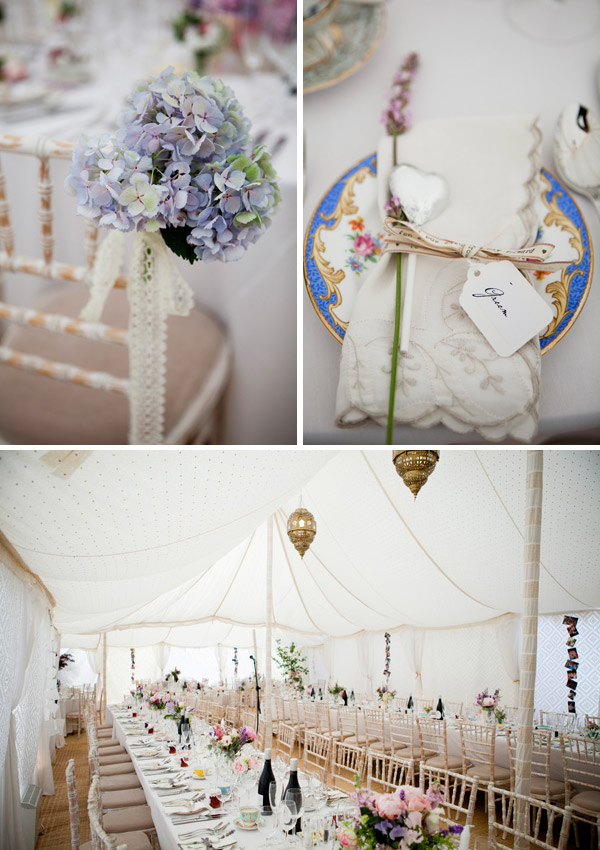 We had a band called the Daggers who got everyone on the dance floor. The Will Smith medley was a particular hit.

We danced to Nobody does it better by Carly Simon. I chose it as its very fitting for Duncan as the only films he’ll ever watch are Bond movies! Weirdly the week before the wedding some of my girlfriends called and said we must have that song – with no prompting! 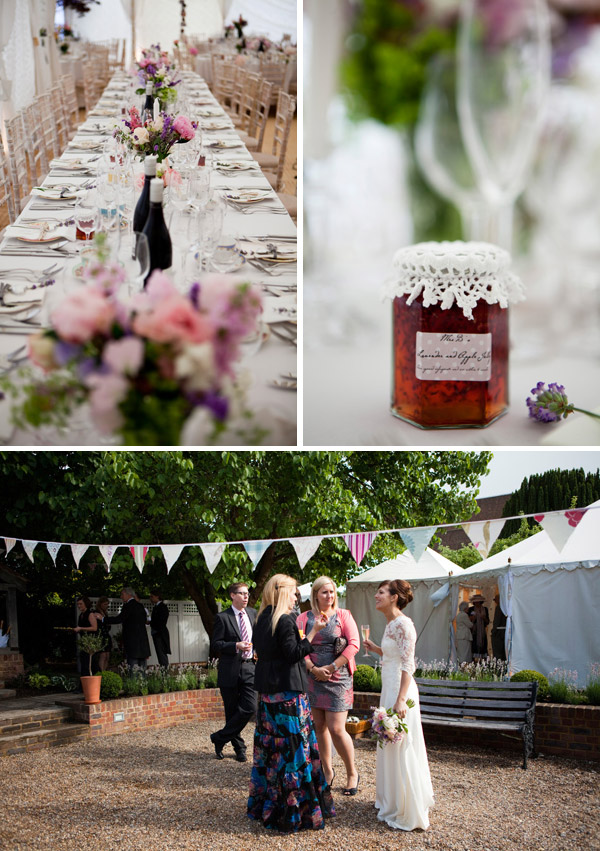 My mother-in-law made everyone jars of apple and lavender jelly which was delicious and we covered the jars with crochet lids which we cut out from an old table cloth which belonged to my grandmother.

I loved our Indian tents from the Raj Tent Club – it looked more beautiful than I could ever have imagined. Walking into the tent when it had been decorated was incredible – the smell of the flowers hit you and it looked the epitome of vintage chic (in my opinion anyway!). 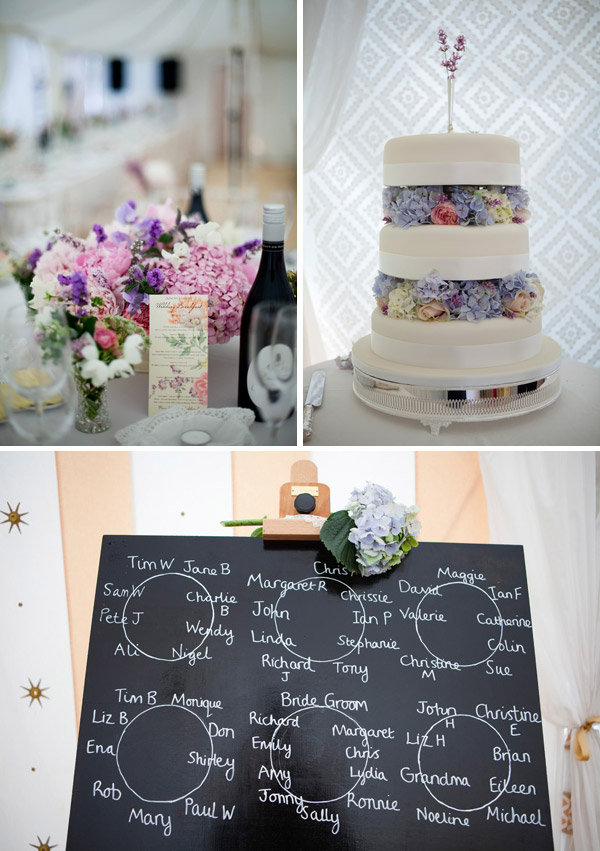 In terms of other touches, for our late night snacks we made up picnic hampers with cheese, scotch eggs, sausage rolls and pates as well as every type of chutney you can imagine! We used gorgeous wooden disposable cutlery and my best friend made beautiful tag labels for all of the goodies. They went down very well with the guests. 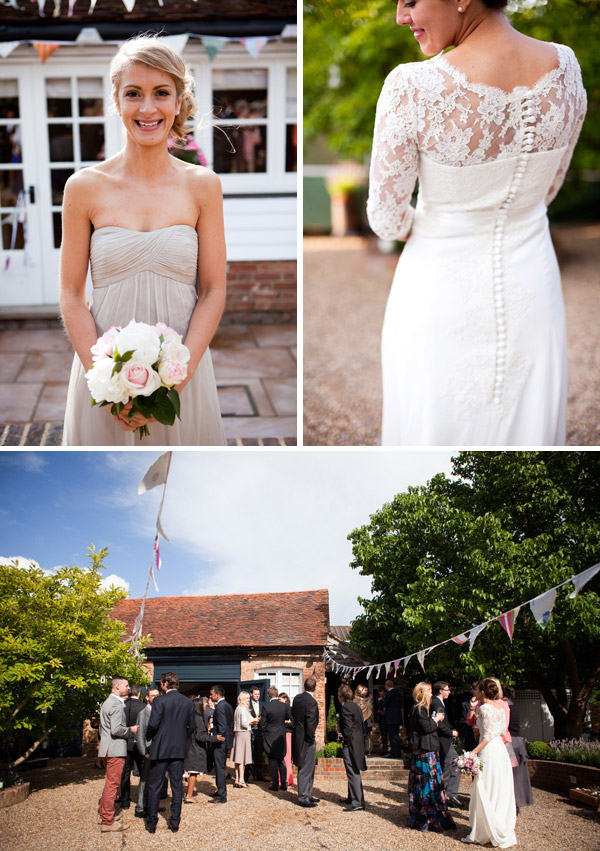 We had a photo booth which we put in the chill out area – it went down a storm and we also used this as our guestbook as the booth printed 2 sets of each pic – one for the guest and one for us.

As a nod to Duncan’s Geordie heritage we had casks of pale ale from a micro brewery at Beamish Hall in Co Durham. The champagne we had was from a champagne house we discovered on a trip to Epernay in France a couple of years ago. We took all the family over to collect it and made a lovely weekend out of it.

My mother in law made beautiful pink cushions to scatter round the garden.

Get a look book going as soon as possible – its really fun to create and I’m loving looking back at it now!

Involve your family and friends – I couldn’t have organised it on my own. My gorgeous husband made wedding spreadsheets and kept us all on track; my beautiful bridesmaids sorted the picnic baskets, made confetti cones etc etc and ran all over London collecting things; my parents turned their garden into an oasis of beautiful flowers; my amazing mother in law made bunting, jellies, cushions and the cake.

Those shoes are just one spectacular feature of this super cool D.I.Y back garden affair. A personal touch, gesture or thought went into every single detail of Sarah and Duncan’s big day. A real team effort… And a Cup winning performance all round I think.

Adam likes Pina Coladas and getting caught in the rain.
Tags:Jimmy Choo

15 thoughts on “Nobody Does It Better.”