As in the Studded fantasy blazer from Zara (yes – it seems the entire RMW community has gone and formed its very own sideline fan club for this fashion power house.)

I was actually following long time RMW’er Teresa from I Am Into This on Twitter and she tweeted this sexy number just as I was deciding what gifts Mr O’Shea should treat me to for my birthday.

How very convenient……and straight in the virtual basket it went.

So I can collect absolutely zero points for this find – it was 100% Teresa’s idea. And if you want to follow her she’s @teresa_iam but don’t blame me if she inadvertantly makes you bash the plastic.

I am wearing the blazer with a T-shirt from their basic range – it’s kind of see-through so a vest or a nude bra is a must…unless you don’t mind the semi naked look I guess. I can’t see the colour variation on the web but they do this T in a gorgeous coral, a sunshine yellow and the pale blue I’m donning in store. 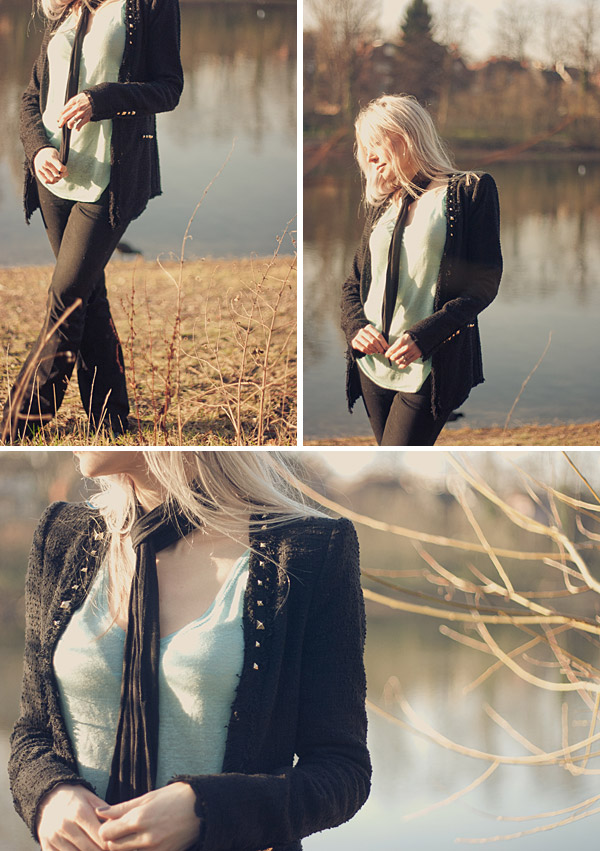 I have suddenly developed an unhealthy thing for “neckwear” – like I nearly always have to have something around my neck. It must be obvious as two of my best friends bought me gorgeous scarf items this month – both in differing shades of blue which makes a nice change from ahem…grey.

And if I can’t wear some kind of material under my brucie chin then it’s got to be a statement necklace – the “Chain Tube” below is a new purchase from COS, I also have the bracelet to match.

You should also check out the leather wrap cuff – very sexy and a little bit rock n roll. I bought it for my friend Maria’s birthday in February who is frankly way cooler than me and can pull it off with just a chunky off-the-shoulder knit and jeans.

If you are wondering (and to be fair you’re probably aren’t as you can hardly see them)…what the stripy bits are in my hair then they are feather extensions. As in actual real feathers that clip into your locks semi-permanently with a tiny metal bead. You can wash them, blow dry them – the whole works. They last anywhere between a month and four months – I have white and (here we go again) grey on the one side and blue and black in the other.

Upon telling Mr O’Shea I was having feather extensions he just raised an eyebrow and shook his head – didn’t say a word. And then upon returning from the hairdressers he exclaimed “Oh I see! those are quite subtle, I was expecting you to resemble a peacock!”

Me: I beg your pardon? what did you think I was having done exactly – a whole head of giant feathery bits?!

James: Yes, I thought you were having your hair extended quite a bit longer but with feathers and not um….hair.

James: Last time you said you were “just going to a Hen do in London for afternoon tea” you came back with a giant cardboard “C” stuck to the back of your head, and the time before that it was a “just a photoshoot” where you returned with two giant spongey pigtail balls and a mohican so you would look like a “Manga cartoon”….. what was I supposed to think?

Hmmm. I guess he has a point.

Any of you gorgeous lot have an obsession with neckwear?