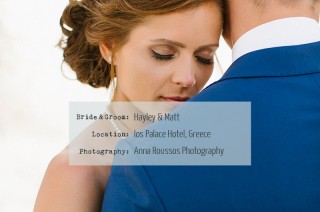 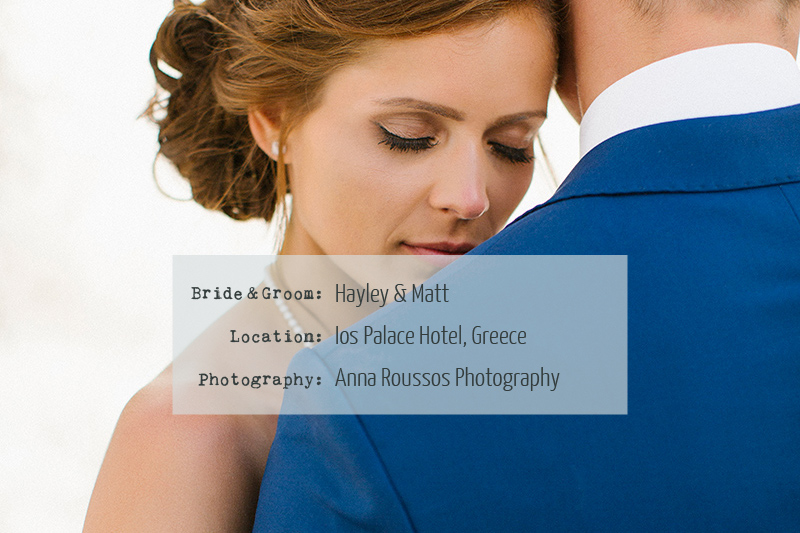 How about we all jet off this afternoon to revel in the big day of the gorgeous Hayley and Matt. These two decided to get together, get engaged and get married (not all at the same time I might add!) on the sweetest Greek island called Ios because it holds such a special place in their hearts.

They decided to do away with many wedding traditions in favour of creating a day that reflected them as a couple as well as making it an amazing experience for all their friends and family and I have to say that looking at the delicious photos it definitely made for the most wonderful ‘I Do’.

END_OF_DOCUMENT_TOKEN_TO_BE_REPLACED 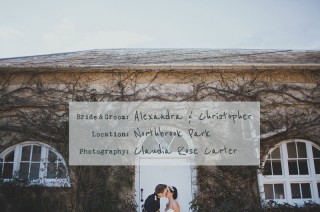 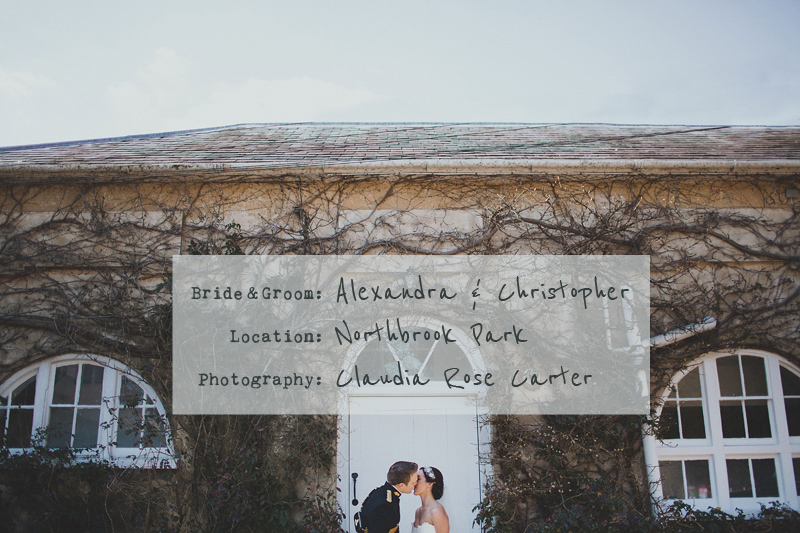 It’s always a real treat to blog a wedding by Claudia Rose Carter; she’s adept at capturing, for eternity, those sacred, intimate exchanges that could so easily be lost – a blink and you miss it kodak moment if you like. Instead she records them with such love, such care that you almost feel as if you’ve keen granted a privileged peep into someone else’s world for a short while.

One of those worlds is of Christopher and Alexandra, also affectionately known as Louie & Shep respectively and their big day and folks trust me when I say that there are plenty of kodak moments in this little beauty.

There’s the morning cup of tea with the girls – the last as a single lady, the blissful confetti moment filled to the brim with post-wedding elation, the youthful high fives with the boys and then there’s ‘the one’ where Louie sweeps Shep back into his arms.

Trust me when you see it you’ll just know; it made my heart melt.

Well what are we waiting for, let’s get going…

Shep the Bride: We chose the 18th century Northbrook Park venue because of the setting; the grade II listed estate is set in acres of green fields with beautiful walled gardens full of lavender and rosemary bushes. When we first came to view the venue it was in the Summer so all the flowers were in full bloom and it looked and smelt amazing, and they have wild peacocks! 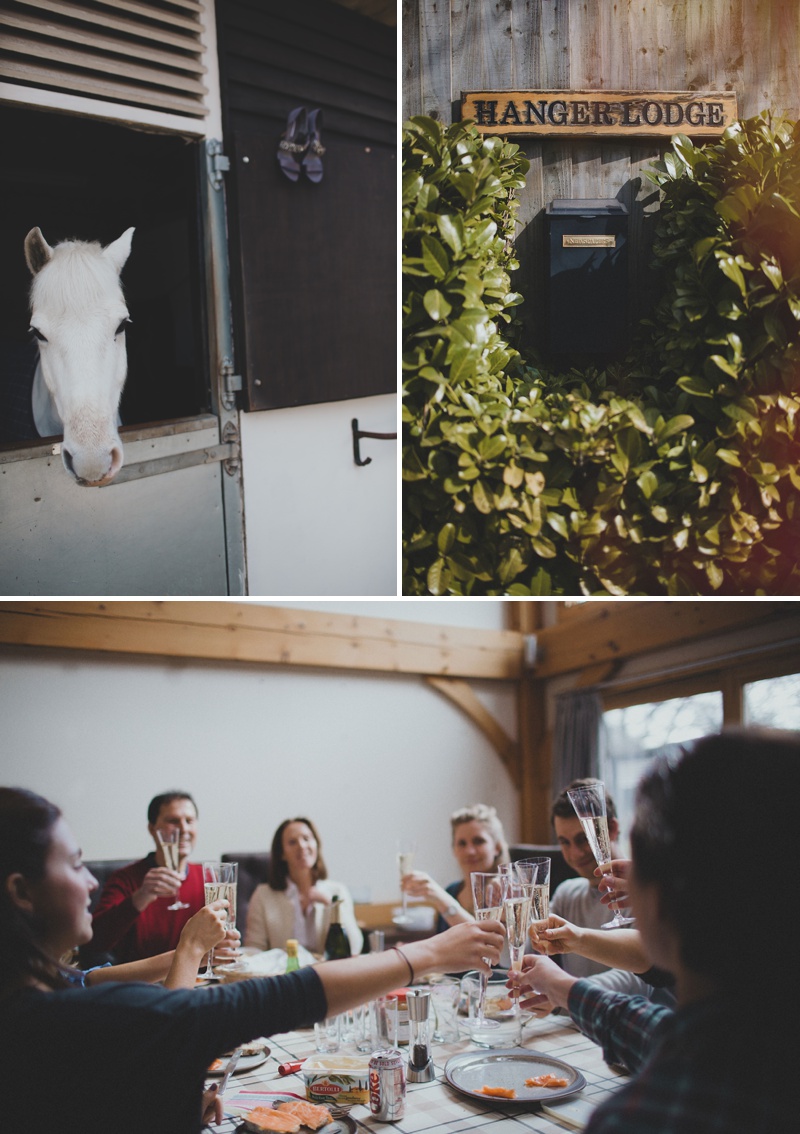 The venue unusually had the option of two rooms for both the ceremony and reception. The Vine Room, a white, light filled marble room was a perfect setting for the formal part of the day and the Orangery with exposed brick walls with trailing ivy and white tented ceilings provided the ideal informal setting for the reception. By having the two rooms the day was a seamless transition from Vine room, to the gardens for the champagne reception, to the Orangery.

I had decided from an early stage I wanted a 1920s inspired headpiece so when the veil was off there was still something going on, I chose a Jenny Packham head piece called Acacia II but rather than buy it for £480, I rented it for a week for £60 from Elegant Wedding Creations. 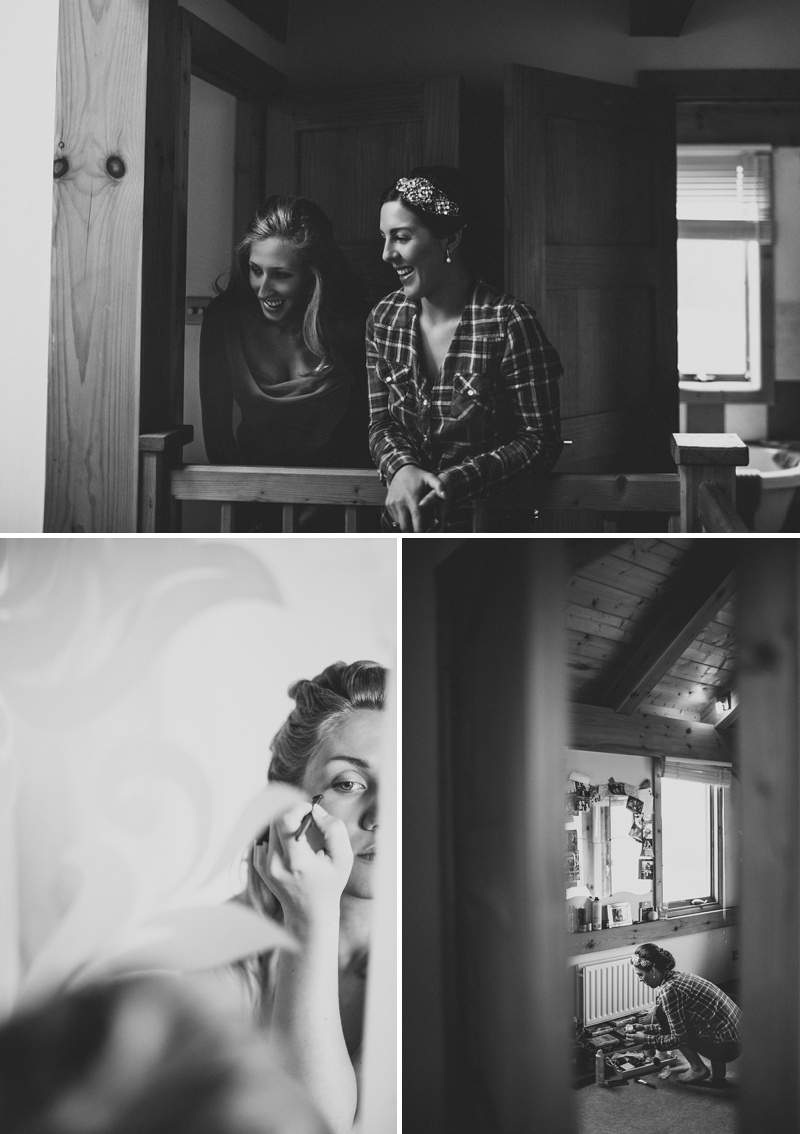 It made much more sense as I would never wear it again! This was worn with a simple updo based on a style Kate Middleton had worn, it was important that it didn’t look too finished or prom-like to keep it soft. My bridesmaids all have beautiful thick hair so we went for a mixture of hair down; some curls, waves or kept natural. It was important to me they felt happy with their hair so gave them a pretty loose rein.

Make-up was initially a disaster, we had several trial sessions at Benefit makeup and all ended up looking like drag queens! I decided I would do my own as Louie was used to seeing me the way I apply it, so I wanted him to recognise his bride! I went for a natural base with heavier eyes and tried to keep it looking healthy with a glow, rather than an evening look. 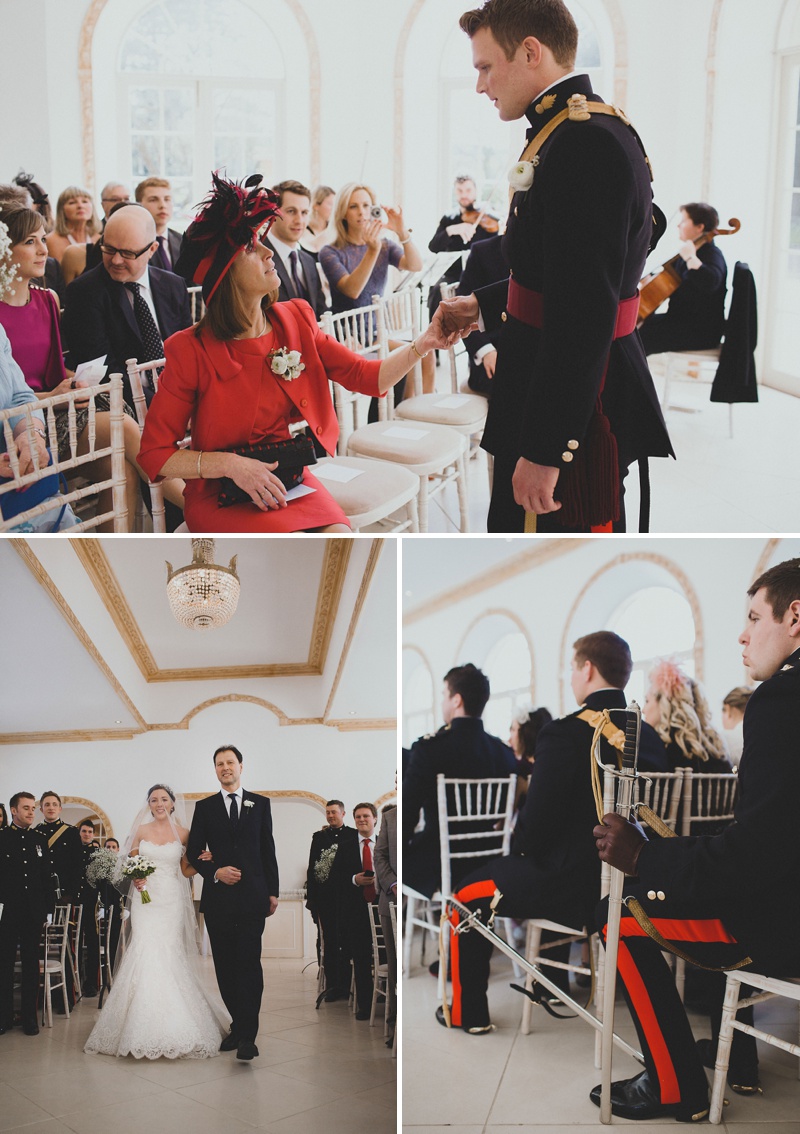 The dress was Dakota by Enzoani which I bought at JS Couture off Oxford St, London. I am very picky with all things bridal and had seen more dresses I hated than I liked in the magazines. After trawling the internet I saw the Dakota dress and was the first one I loved, it was the first I tried on and knew it was the dress!

It was a classic sweetheart neckline with a tight body into a dramatic fishtail hem. The lace was inspired by early 20th century French lace so was thicker than the usual lace you see all the time. I loved the dramatic silhouette it gave me and thought it had as much impact as a ‘princess dress’ without being too Disney. Louie being in the Royal Artillery was in military dress on the day so it was important to have a timeless dress that would match the heritage of his uniform.

My shoes were a bargain from Vera Wang on a shopping trip to NYC to visit one of my bridesmaids, Courtney, who was living out there. They were charcoal satin sandals with a jewelled strap to match the design of the Jenny Packham headpiece. The veil was a cathedral length with tiny crystals for a subtle shimmer as we came down the aisle.

We had four bridesmaids, Heather – my maid of honour and my oldest friend (we met at school aged 6), Isabelle my little sister, Gaynor a very close friend, and Courtney my best friend from University. They all wore dresses from Jim Hjelm – a beautiful dove grey floor length chiffon dress which was ruched at the bust with a single strap over the shoulder.

The groomsmen were Louie’s two brothers Nick and Jamie, Ben, Will, James and Jamie (best man) were all best friends at school. To tie in with Louie’s blue uniform they all wore navy morning suits with a dove grey waistcoat and a royal blue polka dot tie.

Being a military wedding we also had a Guard of Honour of six men, traditionally there to ‘protect the wedding day’. Each of these guys wore the uniform from their regiment with a hat, white gloves and silver sword. 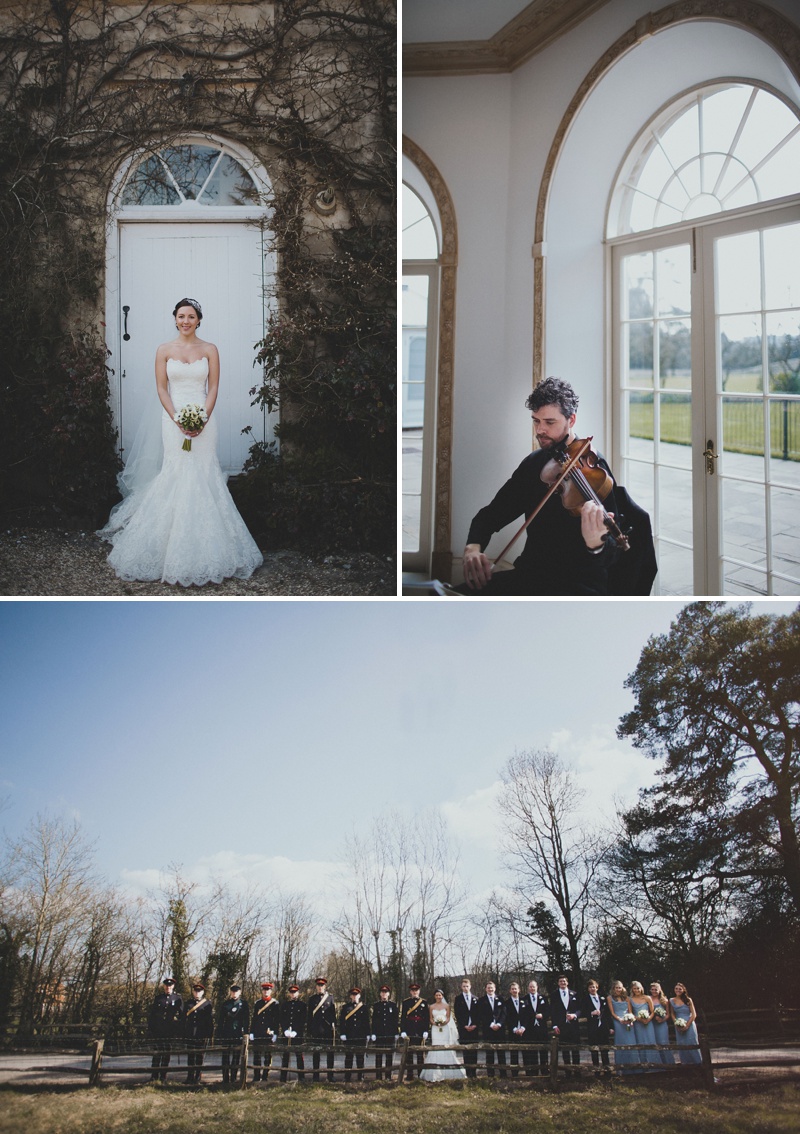 To keep the day classy, the colour scheme was various tones of silvers, greys and creams. I really hate the cookie cutter ‘colour theme’ approach where everything is the exact same tone of a colour and thought it much fresher to have differing tones of a neutral palette. 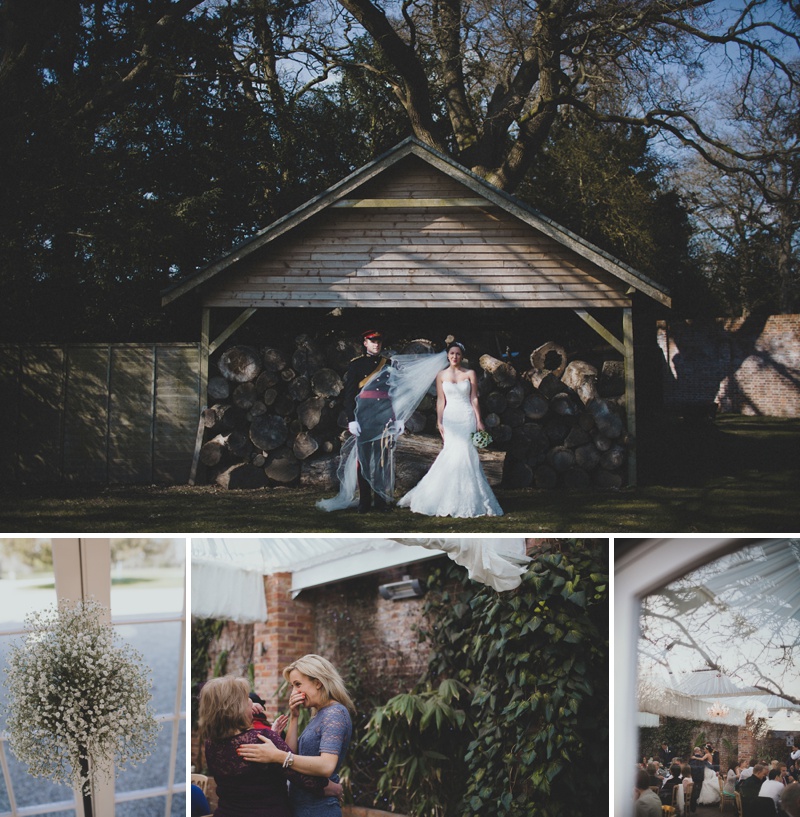 Flowers again were kept to volumes of the same flower to give it both impact and a contemporary twist. My bouquet was white anemones; they look a bit like white poppies with a navy/black centre. The girls had white ranunculus which looked beautiful against their dresses. All of our other floral decorations such as the table centres, the podiums along the aisle and above the fireplace were Gypsophila. The delicate size of the flowers looked great in volumes and created a cloud like puff of flowers which worked so well. We had a florist called Nursery Fresh do these for us. 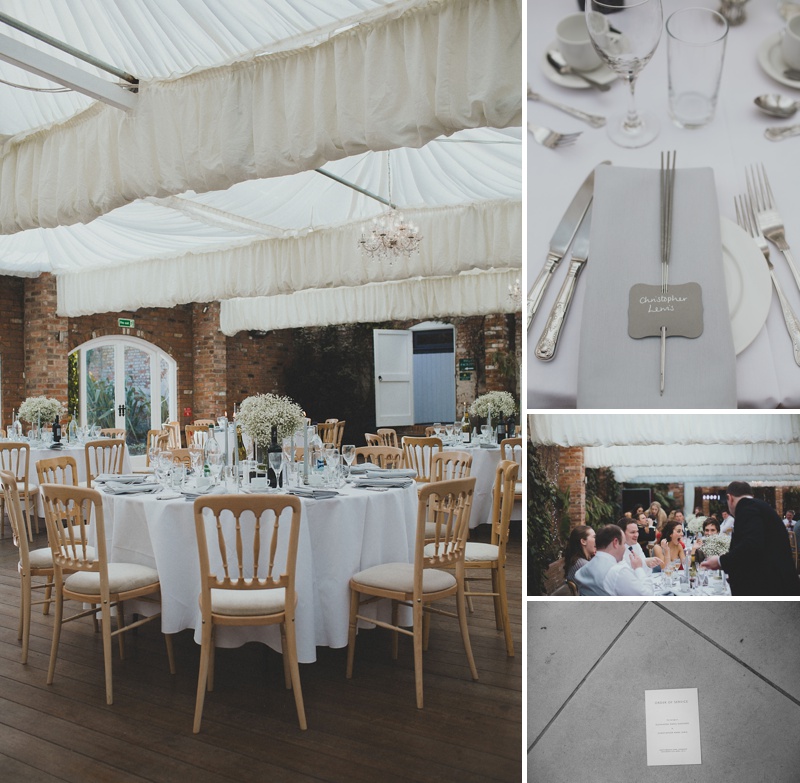 The best part was the vows as we had waited over a year to say them and it really had such sentiment and meaning. The 3 readings were read by my close friend Francesca, my brother Patrick and Louie’s brother Nick. We chose a mixture of sentimental, funny and optimistic.The first one was An Indian Wedding Blessing, then I’ll be There for you by Louise Cuddon and finished with These are the Hands.

We had a band called Academy Allstars – they were great and had a male and female lead singer so could tailor any song we asked for. We had Van Morrison Crazy Love as our first dance, it is a classic song and had a slow enough beat for us to dance to! 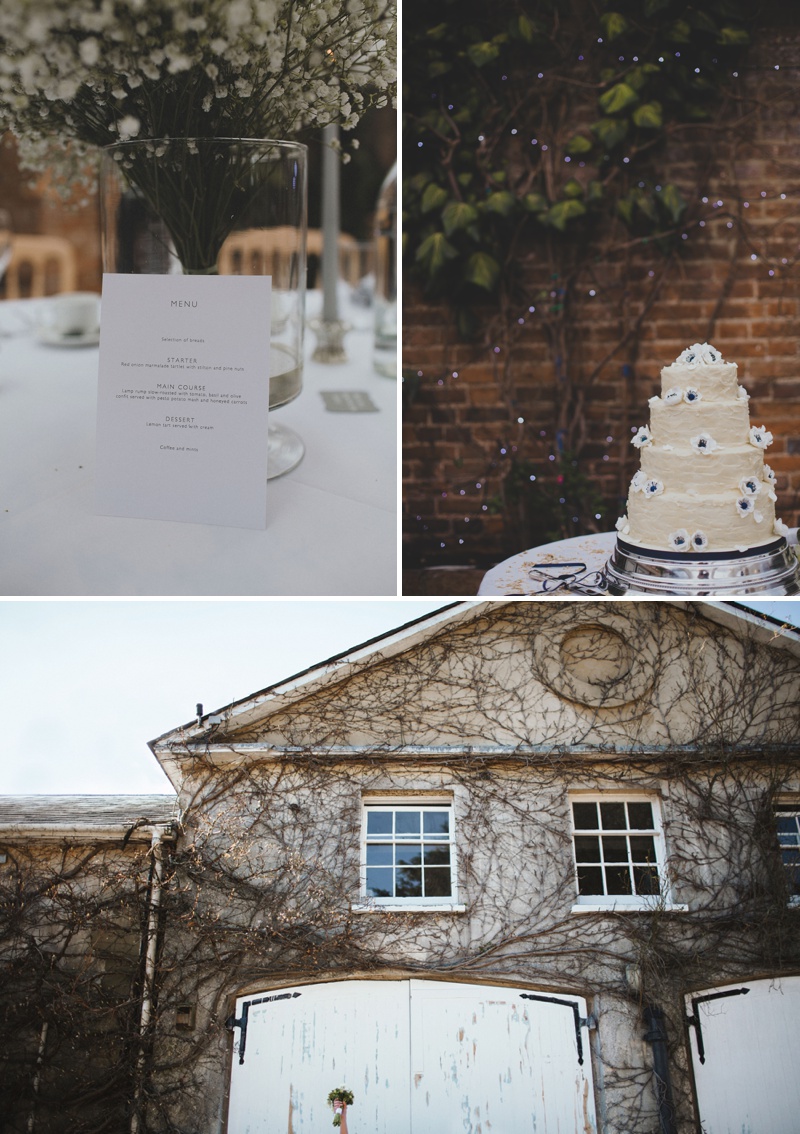 The food was an important factor for Louie so we didn’t scrimp in this area. We had a selection of European style canapés to be served with the champagne followed by a three course meal of red onion and gorgonzola tartlet, butterflied lamb with pesto mash and spring vegetables and lemon tart with a vanilla clotted cream. This was all provided by So Tasty.

The wedding cake was a wonderful gift from my mother in law Jenny and Nick’s girlfriend Charlie who are both excellent bakers. In the past I had seen lots of cake designs all of which didn’t resemble something edible – the hard icing didn’t seem very appealing or tasty. We wanted the look of a delicious homemade cake. 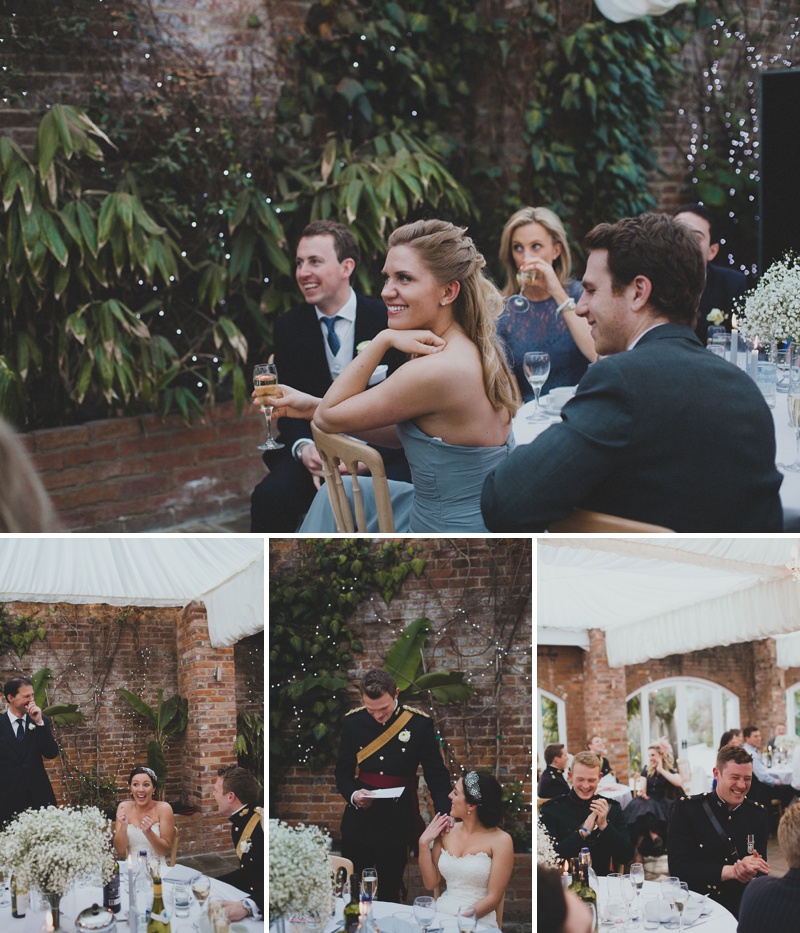 We went for a simple sponge with lemon and vanilla creams running through alternate layers of the sponge. They create a four tier cake with vanilla butter icing slathered on and finished with tumbling icing Anemones to match my bouquet. It looked and tasted so beautiful we were very happy! For favours we had grey sparklers and our photographer Claudia Rose Carter got some great pictures of us with them outside.

Being a designer the initial look of the wedding invitation was quite important in telling our guests what they could expect. A pet hate of mine is heavily scripted fonts for wedding invitations so we went for an invite style which looked more like an exhibition invitation and was quite masculine. A graphic designer I work with helped me design a set of stationery, which was monochromatic, masculine and chic; it was a nice and unexpected contrast to all the very feminine elements of a wedding.

Try to remember the day as it flies by.

We also booked a photobooth which was fantastic to put people at ease and also get a more ‘real’ version of the day once people have let loose! 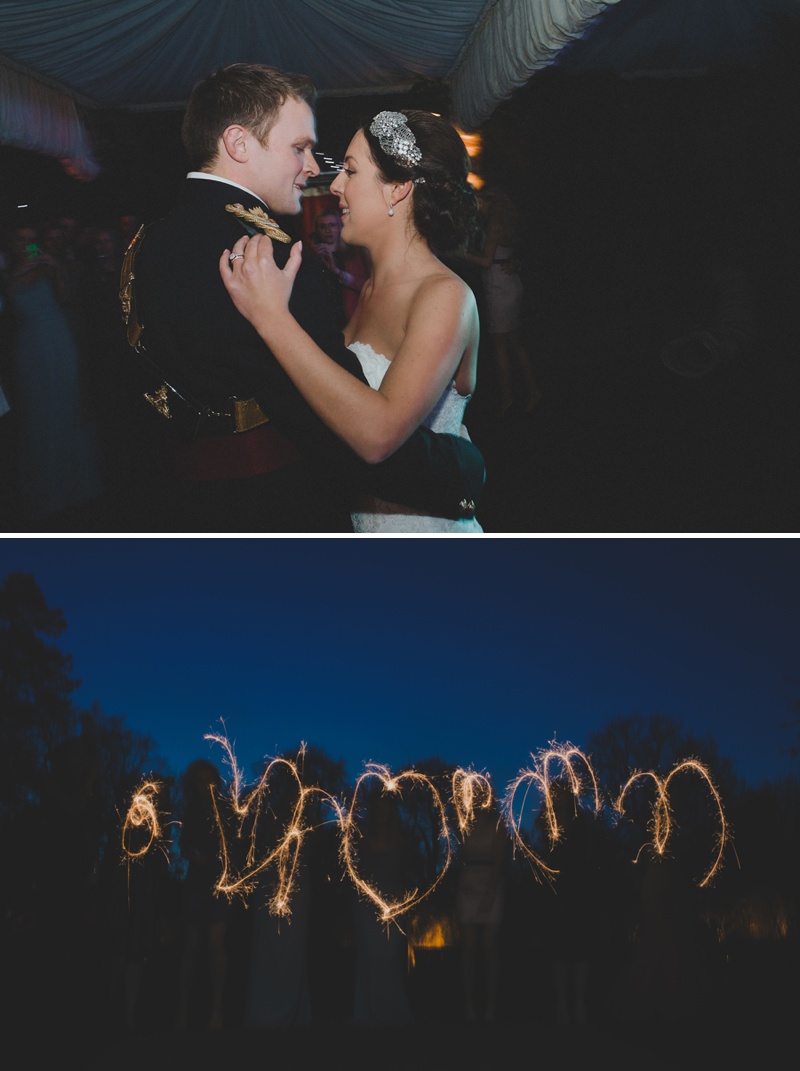 You loved it right?

Who am I trying to kid, of course you did.

Doesn’t Shep’s dress look like it was made for her – a real life princess marrying her beau. And I adore the idea of sparklers for favours – perfect for evening portrait shots and general high jinks.

Here’s to your happy ever after you two.