Since I first saw this wedding I have wanted it. Coveted it.

Sophie and Glenn were married on 17th August 2010 at Crear, in Argyll Scotland.

I think this is the most perfect wedding I have ever laid my eyes upon. 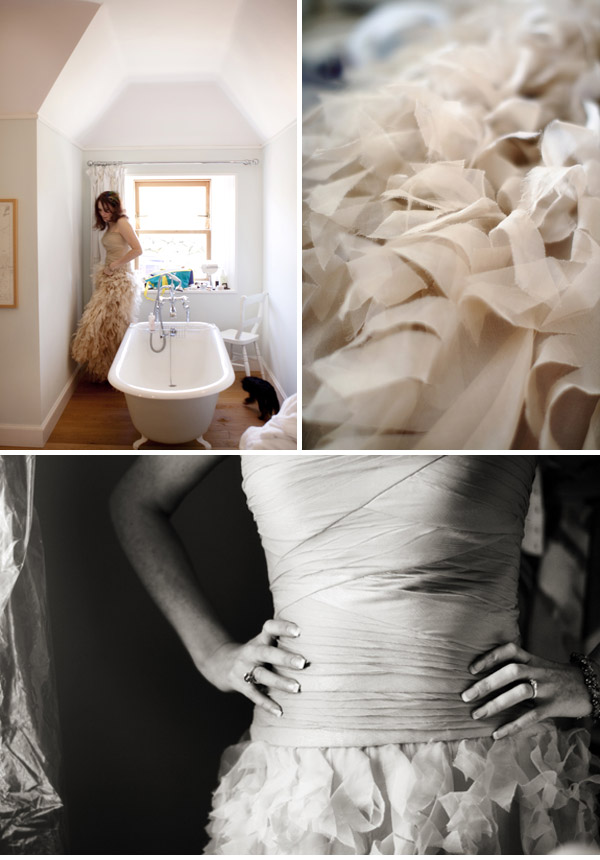 After many attempts I eventually found the Tadashi feathery Gown on the Bloomingdales Website in America, and loved it at first sight- But as nowhere in England stocks Tadashi Shoji (A Japanese Designer) I had to have it shipped from a store in Caesars Palace in Las Vegas, slightly risky but luckily it was a risk worth taking! (It also went on a round-the-world trip after getting caught up in the Ash Cloud but luckily arrived in time to get it altered to fit!)

I searched Etsy, the online craft/arts store, and discovered Melanie in Massachusetts , who trades under the name ‘LittleLuxury Boutique‘ she handcrafts unique jewellery using beautiful gemstones. 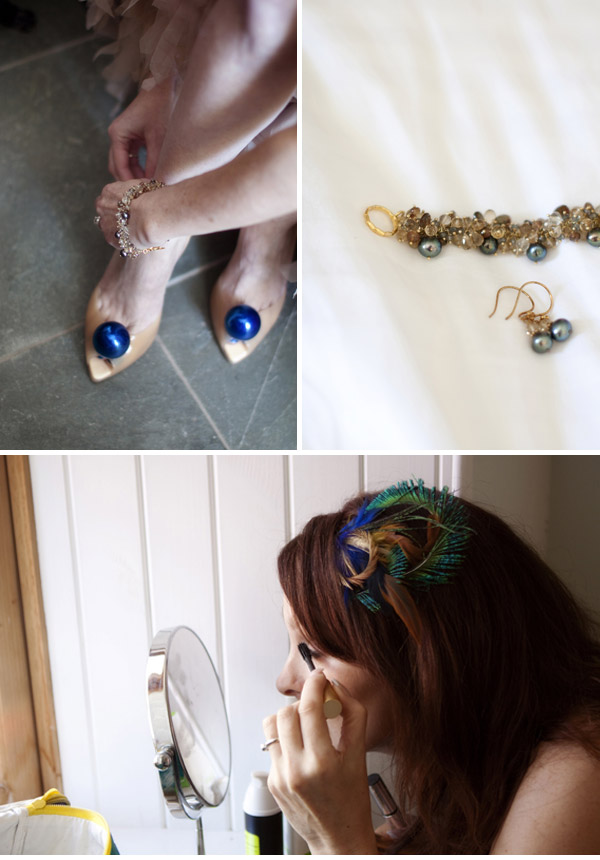 She handmade me a bracelet and matching drop earrings which she describes as ‘soft brown, champagne and beige gemstones, with metallic-lustered teal peacock freshwater pearls for a bold and beautiful accent of color against a neutral backdrop. Gemstones include: andalusite ,champagne citrine, gold rutilated quartz and green topaz’.

I also wore a Pearl and Ivy vintage inspired feathered headband, which had vibrant blue and green tones, offsetting t the neutral champagne colour of the dress.

My shoes were a pair of Vivienne Westwood Melissa Globe Shoes, neutral/champagne colour with an oversize bright blue globe balanced on the top! 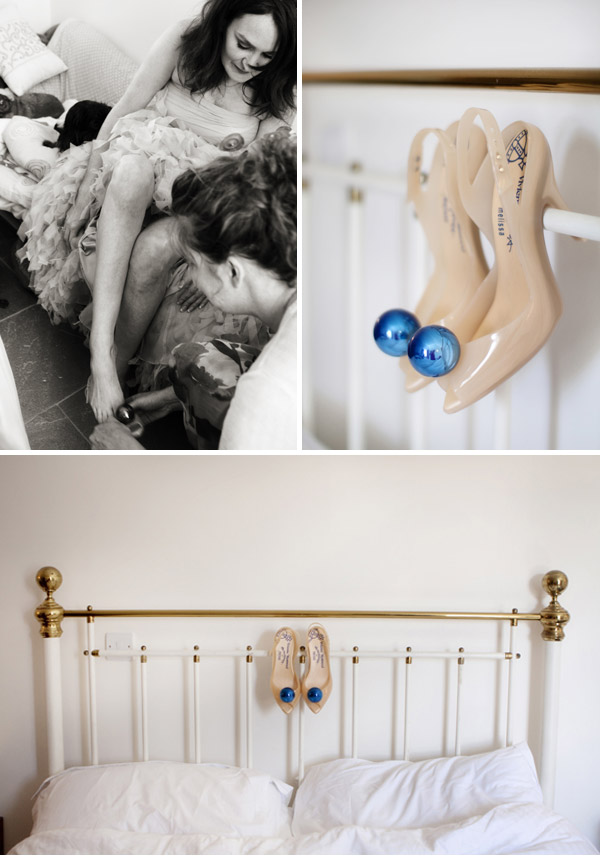 I did my own makeup, using Bobbi Brown products. 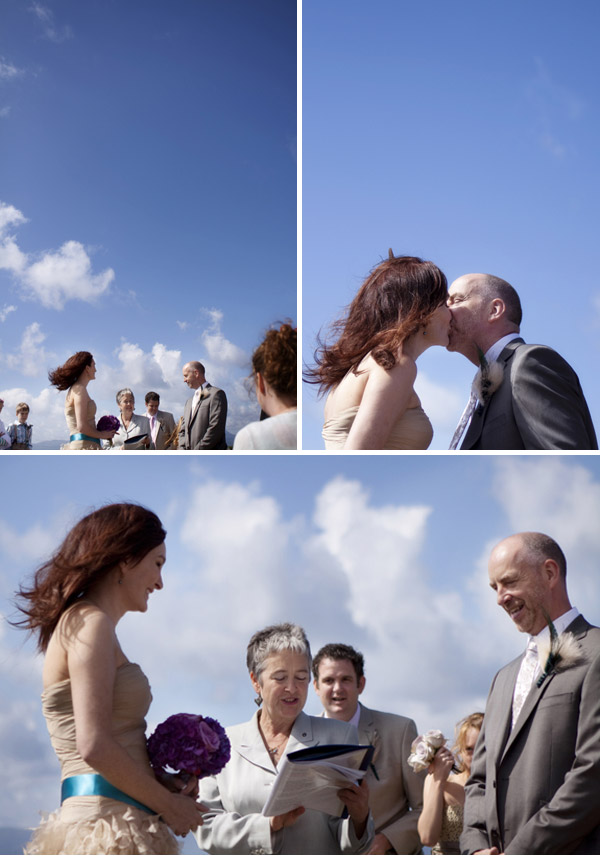 I booked the hairdresser over the phone She was a local girl, who I hadn’t met, (but who had been recommended!) However… she turned up with green festival dreadlocks, a hangover and had obviously trained at the Edward Scissorhand School of Hairdressing… All I can say, is I’m very grateful it was a windy day and the ceremony was outside as my hair was atrocious! (Oh and the satin ribbon blew off my dress in the wind too but c’est la vie!)

Glenn wore a soft brown suit with off-white shirt and silk champagne tie. He wore the buttonhole I made for him (champagne ostrich feathers and a peacock feather) complimented perfectly by his eyes.

(Bit cheesy I know – but he has eyes the colour of a stormy Irish sea, which was the first thing I noticed about him when we met – awwww.)

The young bridesmaids (who were my daughter Poppy and Glenn’s daughter Leah), fared slightly better! Despite the hairdresser being possibly the worst hairdresser in Scotland, I remained remarkably calm-probably because I knew there was no-one in a thirty mile radius who could have stepped in to help, so just had an extra glass of sangria (or two!) 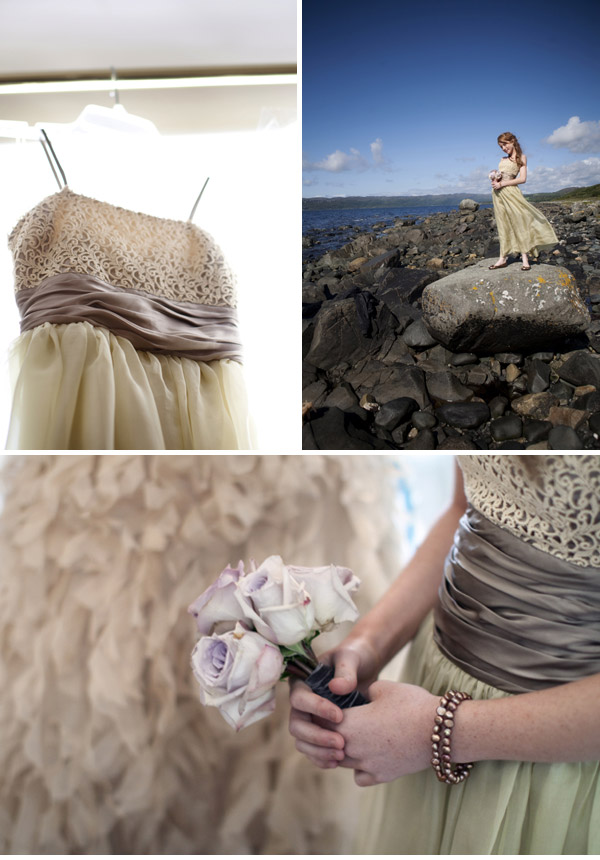 The young bridesmaids (flower girl?) dresses were Nicole Farhi prom dresses, which a local dressmaker miniaturized for me to fit our two young daughters. (I found them on Ebay for 50 pounds the pair though originally they were 500 pounds each!!) I didn’t have a traditional colour scheme- as in one or two colours, instead, I chose a neutral base- champagne/ bronze/, cappuccino/ vintage coffee, and added complimentary hues/tones in teals/ purple/lavenders. 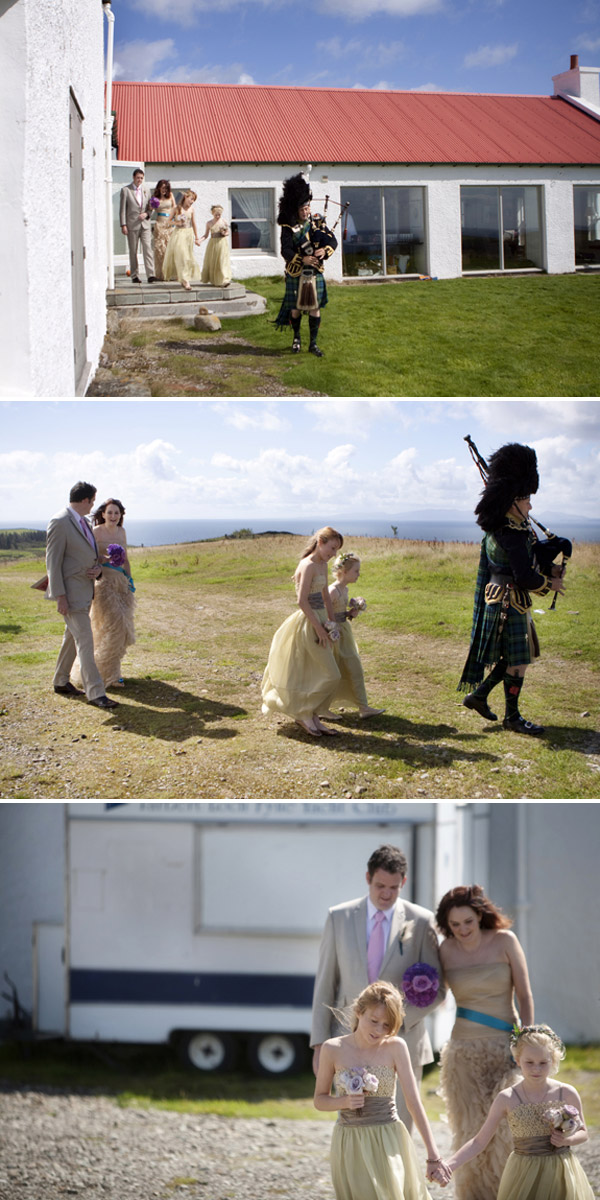 It was more about tones, soft hues with flashes of colour –actually inspired from the landscape/seascape in Argyll –the first time we saw Crear for the first time the year previously in Autumn, the sea, the heather, the hills.

Groomsmen (my brother Hamish gave me away, and Glenn’s brother John was best-man) wore suits/ties of their choice and wore one of the feathered buttonholes I had made to tie them in. 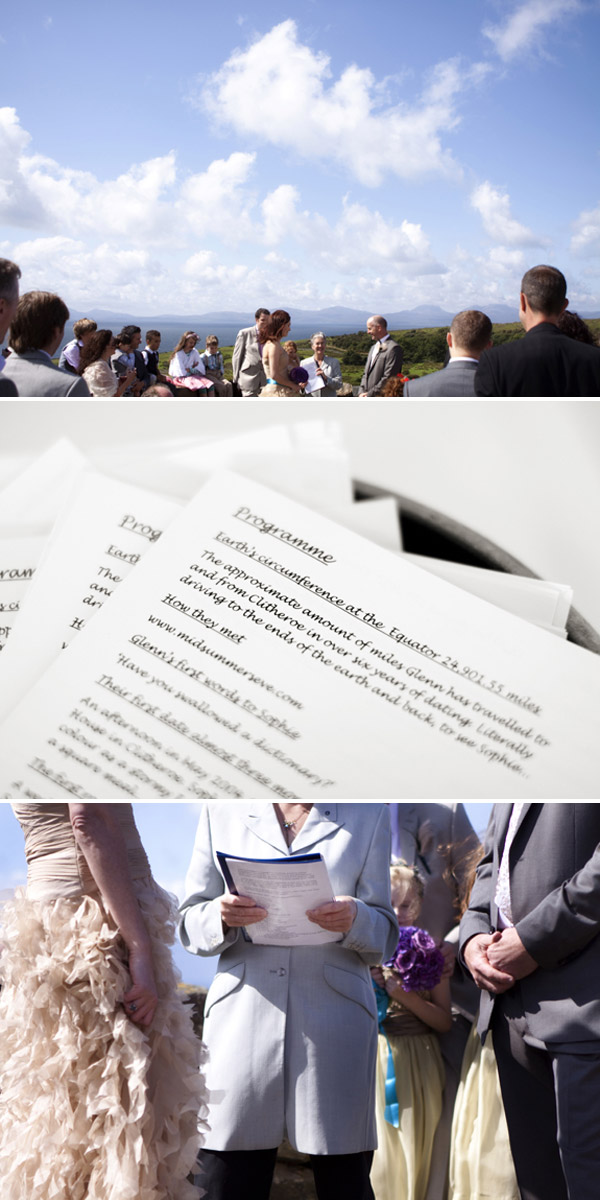 The venue is called ‘Crear, space to create. If we couldn’t create it ourselves we sourced it from an artist who could! 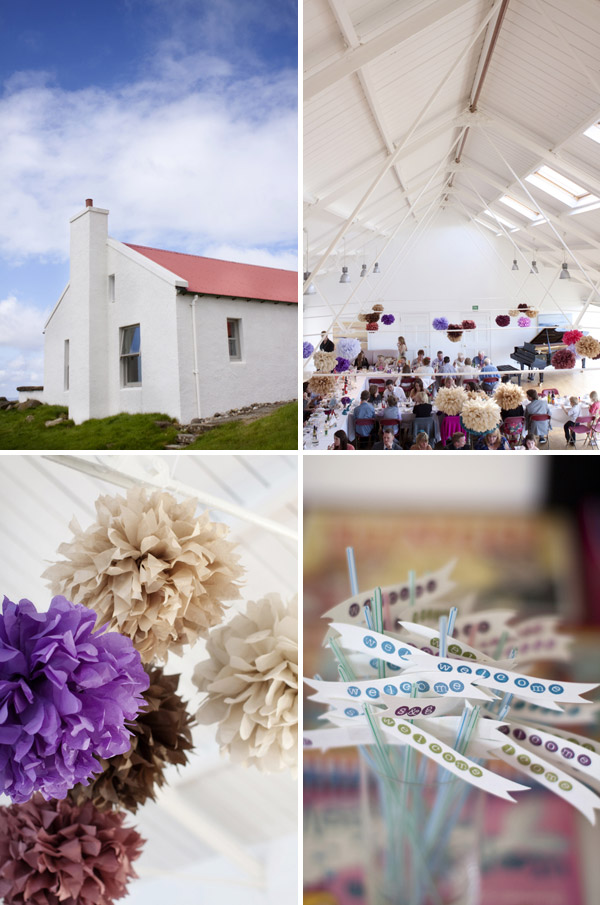 We hung up over 40 paper pompoms in the venue (which I sourced from Etsy, (Portland Oregon this time!) I had spent the day before the wedding making them up as they all arrived flat packed and needed frilly-ing up! 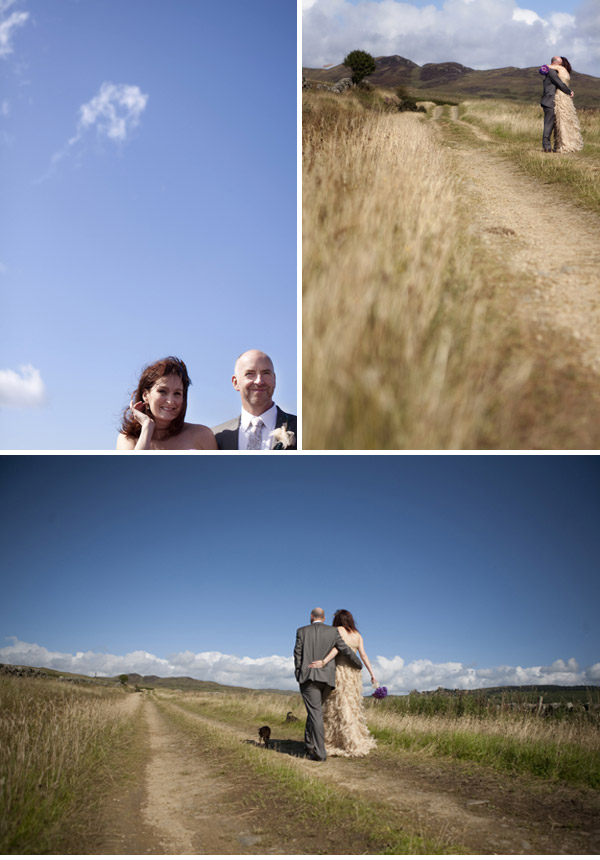 Cara and Nye, aka Lillian and Leonard were our Photographers. We saw photographs they had taken at a previous wedding at Crear, so hunted out their website and just knew that they were perfect for us. Also their reportage style of photography was ideal, as neither of us like posed formal shots, and were trying to avoid the typical wedding photos. 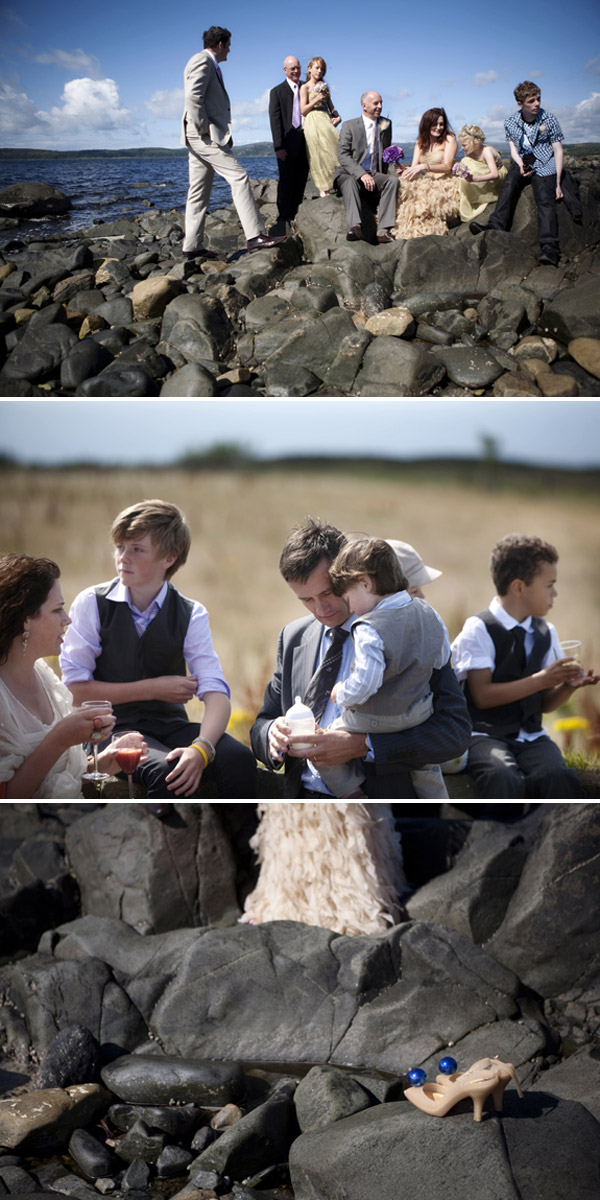 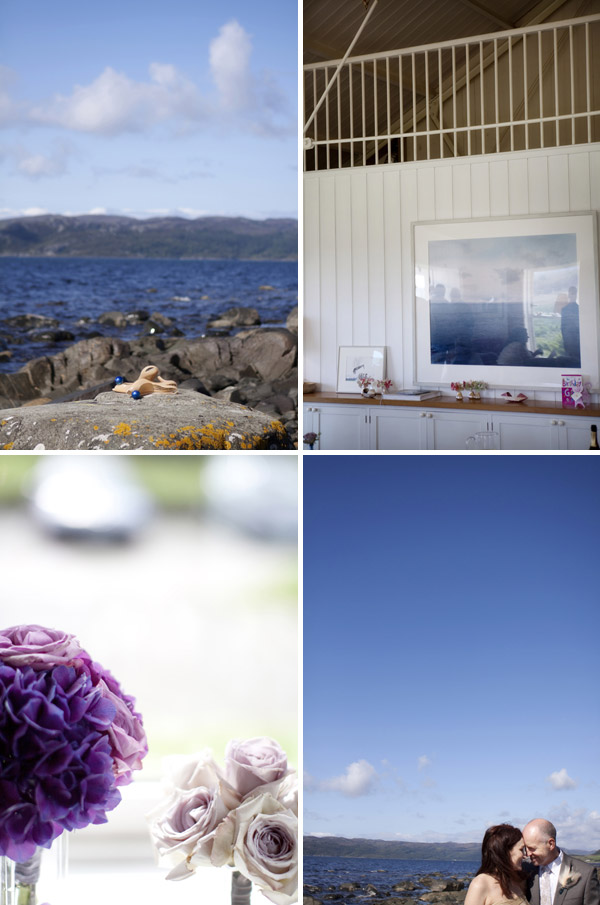 On the Wedding day itself (and subsequently) Glenn and I were bowled over by Cara and Nye; their delightful company, honesty, (diplomacy and tact!), sincerity, talent, calming influence, professionalism, creativity, hard work and effort. We are both overjoyed with the photo’s needless to say! 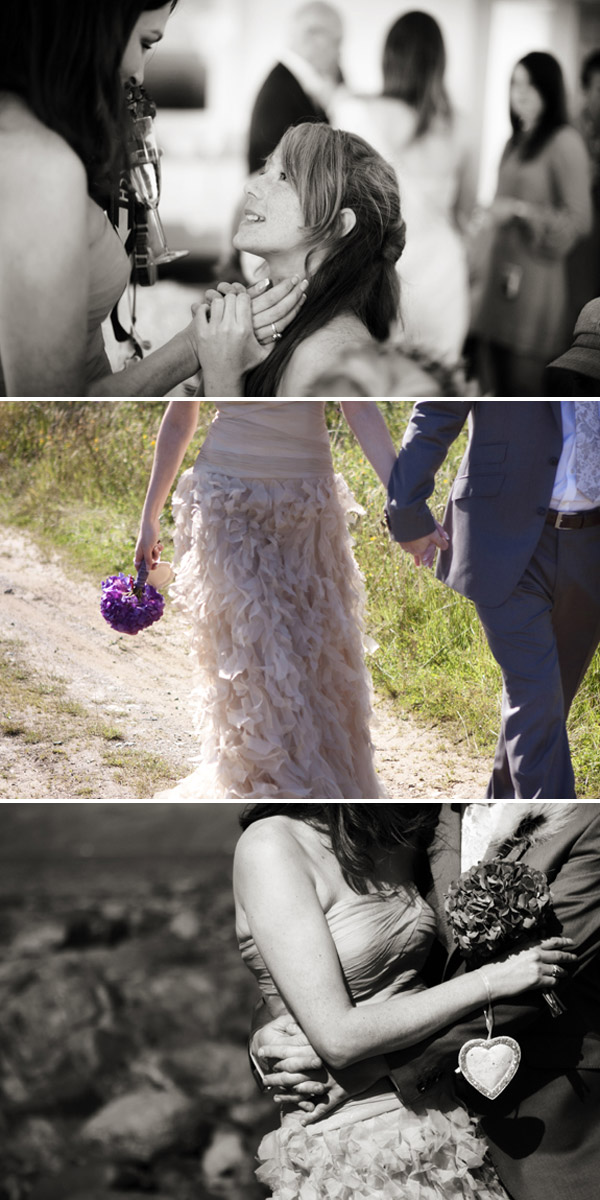 Despite every ounce of chic, unique and DIY style you see here, it is nothing compared to tomorrow’s instalment.

There will be mermaids, and they are so beautiful you will DIE.