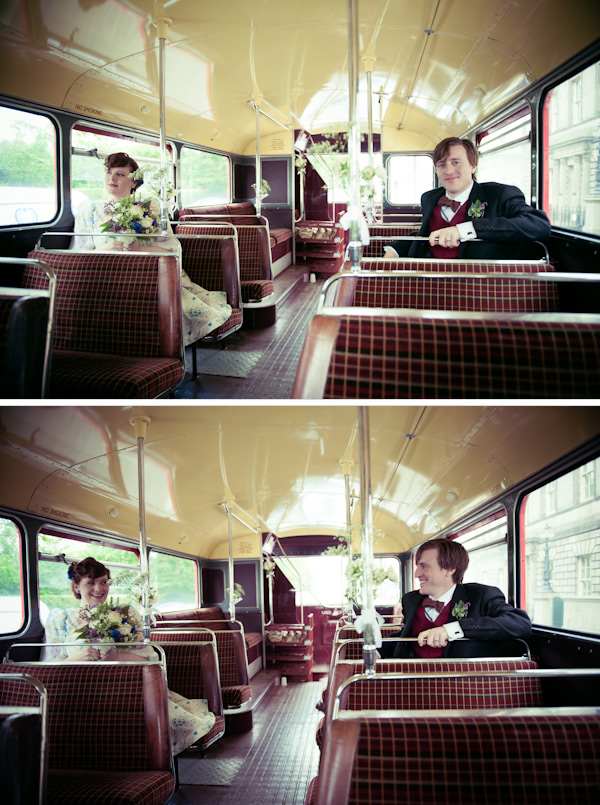 Victoria’s best girls choreographed a tribute to her favourite Uni song “Are You Ready For Love” by Elton John and performed the routine at the reception. I think that’s pretty spectacular, not to mention gutsy – especially in front of all the W-day guests.

I think sometimes it’s easy to get lost in the decor and the details where as usually, the really fun part is definitely the dancing.

And apart from the all important “I Do” that’s certainly the part I have the fondest memories of – as well as some of the best images.

The reception was all built around two things, my parents garden and our love of cake. The tables were all named after cakes, and a selection of wedding guests were asked to bake cakes. All of the cakes were then featured on a huge table and all of the recipes were submitted to be published in a wedding recipe book!

The main cake was made by my friend Bronia, who is an amazing baker and baked a three-tiered traditional style cake for family as a centrepiece to the cake table. It had white icing, and there were two tiers of fruit cake, and one tier of chocolate sponge, because it’s Gordon’s favourite.

Other cakes on the table, were peppermint creme, apple cake, chocolate fudge, whiskey cake, sour-cream cake frangipani, and far breton. Gordon’s mother bought two chocolate cakes from the Chocolate Tree in Bruntsfield and had them iced with Baby photos of Gordon and I on each cake. Unfortunately I never got to try the cakes (other than our first slice) as we were so busy, although we did have a cake picnic the next day, and some of it was still left… 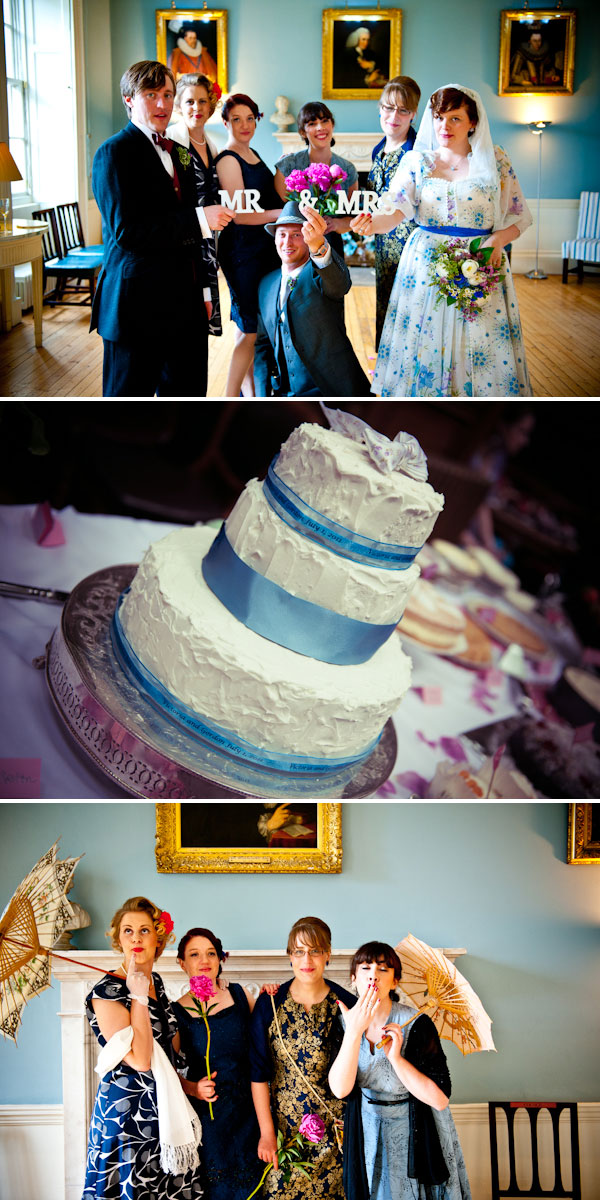 We had a mix of entertainment on the night, we had some indiepop DJ acquaintances play our first dance (Adam and Amy) and a few more tracks to dance to, before we handed over to our friends Kevin and Katie who did Ceilidh calling, partly as it’s common in Scottish Weddings, and partly as it was something a little bit different for Canadian and American relatives. Kevin and Katie were brilliant at getting everyone to the floor and teaching everyone the right moves (which is quite funny as Katie is from Montana, and Kevin is from the Faroe Islands, and when they first met they took dancing lessons together, so it was nice for us to have them pass on that part of their relationship to our celebration). Thankfully there were no major injuries…! 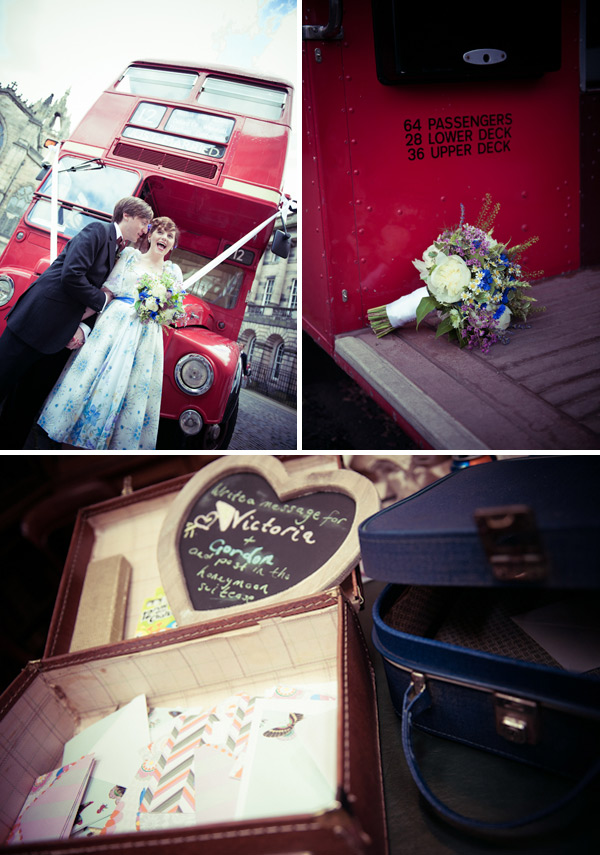 After that Amy and Adam DJ’d the night away with a mixture of some contemporary choices (a bit of Rihanna and Beyoncé…) and some more alternative choices (which is their expertise) like Belle and Sebastian, Camera Obscura, and the Fall. We spent our evening rushing back and forth between the dance floor and the reception area in the adjacent library greeting old friends that we hadn’t seen for a long time. 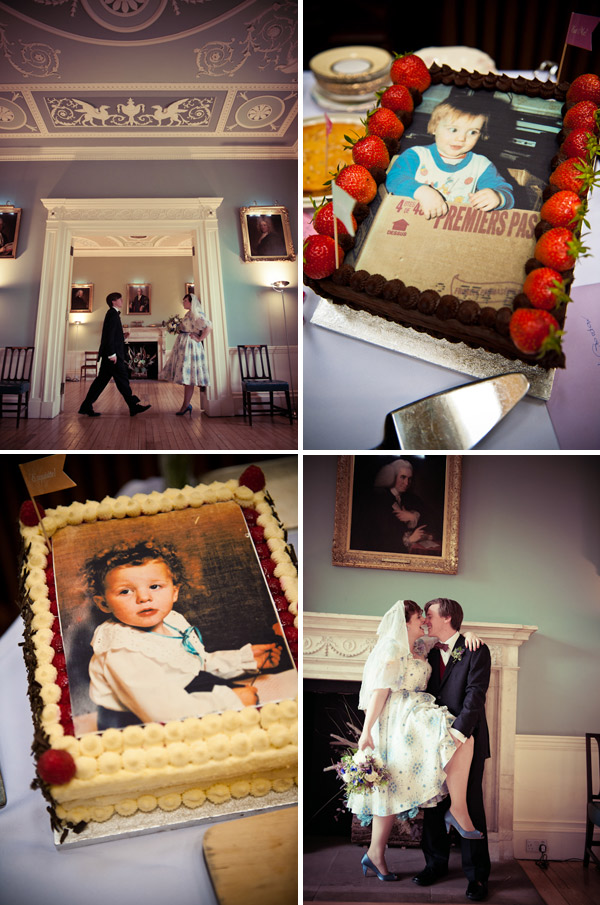 We had some major deliberations on the choice, as neither of us have any formal dance skills, and having not been to many wedding ourselves, we sort of forgot the importance of the first dance until two weeks before, when we began frantically looking for something in a 3/4 time, and trying to lear to waltz off of youtube. Several songs were mooted, but as we weren’t sure on any of them, we didn’t commit, and so we spent some time just randomly looking at youtube videos of bands we liked, until we happened on Wuthering Heights by Kate Bush, and despite being extremely kooky it seemed so right. Also she gives a few dance tips of her own in the video! We stepped on to the dance floor with our limited memory of waltz step, and just decided to be ourselves, ad lib, and go with the drama of the music and somehow it worked amazingly well. 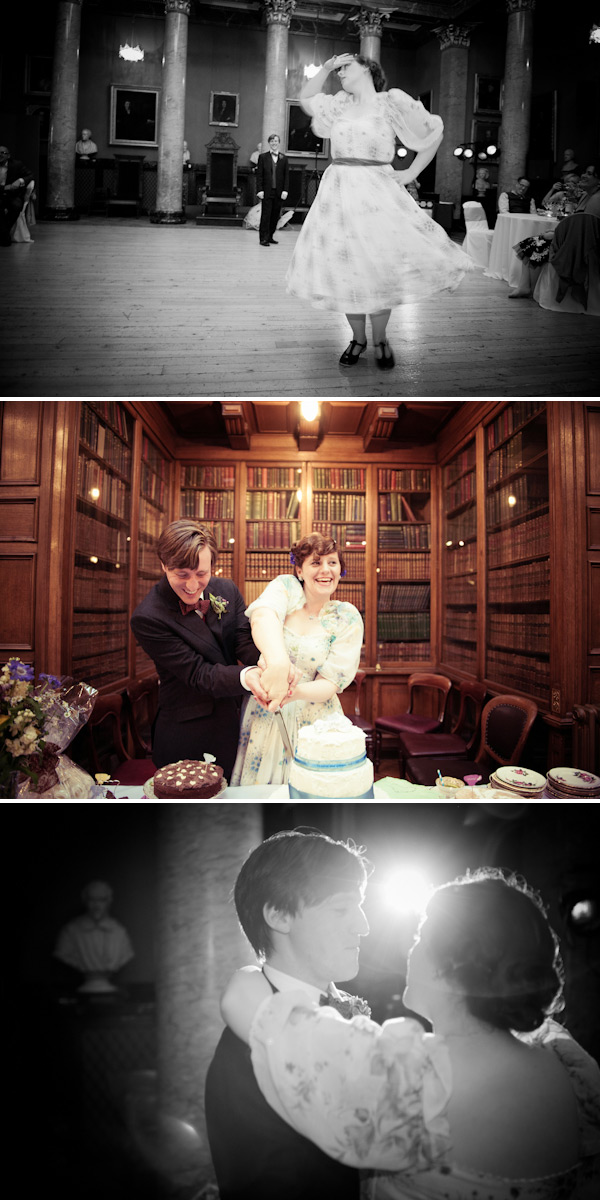 Lots of people thought we’d rehearsed a miniature theatrical production but really we were just having fun, and slightly losing ourselves in the silliness. One tip we took away was not to get too carried away looking at over-choreographed wedding dances on youtube. It just makes you feel inadequate, and really it’s just about enjoying your first dance, and not what anyone else thinks. It was definitely fun to choose such a memorable song, though… 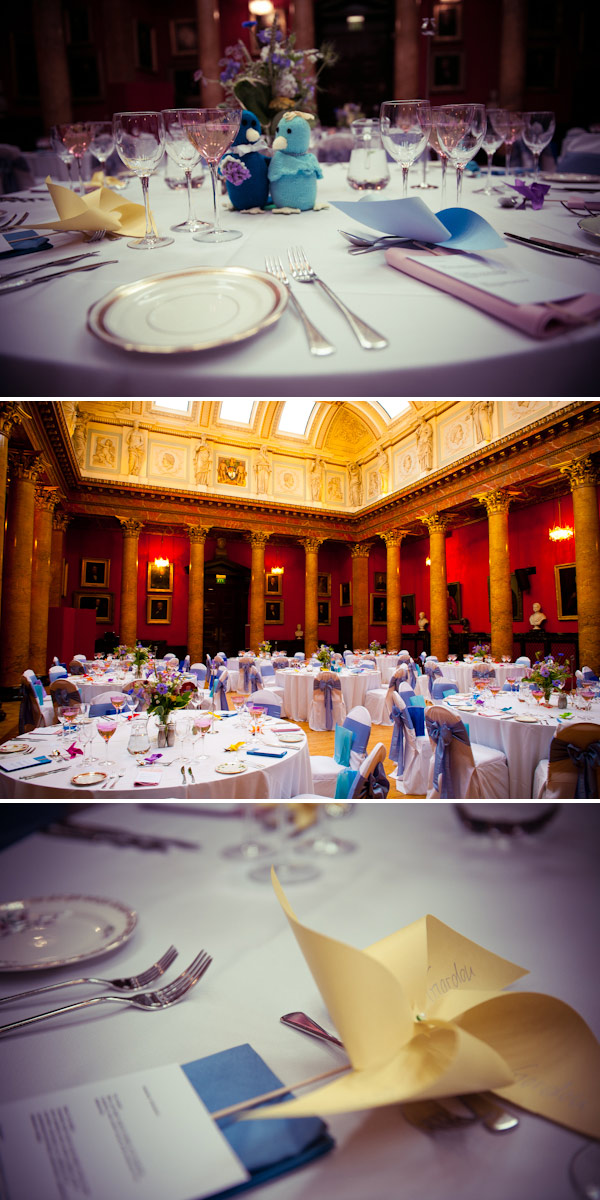 We had cake from the cake table, which guest could take away in little boxes, as well as homemade jam that my parents made at their home (and put in little jars with random liberty print fabrics on top) Gordon’s parents brought little bottles of Maple Syrup from Canada, as our wedding was slightly coincidentally on Canada day.

Me and my bridesmaid Rachel, put together a wedding cake recipe book with all the cakes on the cake table. The books had photographs of friends and quotes about food and they were all tied with ribbon 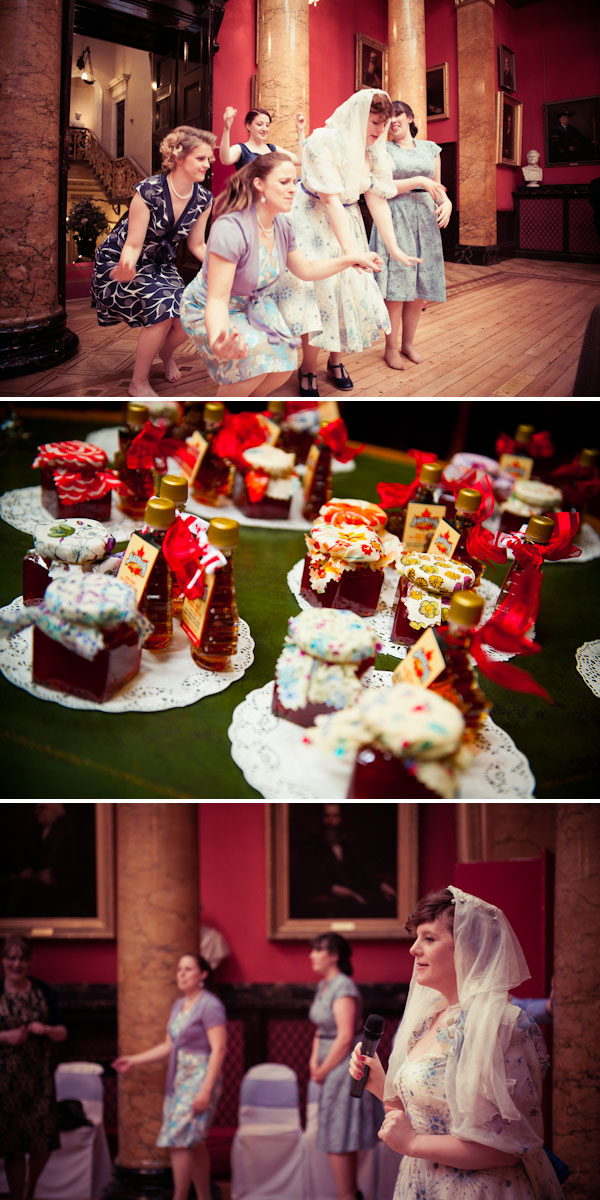 As it was Canada Day the caterers managed to find a special limited edition Canada Day brew of Gordon’s favourite beer, Innis and Gunn.

As we’re vegetarian, and used to going to weddings with generally quite uninspiring Vegetarian options, we had a tasting with our caterers (Heritage Portfolio) of three vegetarian choices for each course, and were able to give our guests a choice of two vegetarian starters, mains, and desserts. There were lots of comments about how it had been the best vegetarian meal they’d ever had. We also had individually named paper windmills on the table, printed menu cards (so that everyone would remember what they’d ordered!) and had our champagne toasts in vintage tea cups (as well as having the food served on vintage plates) 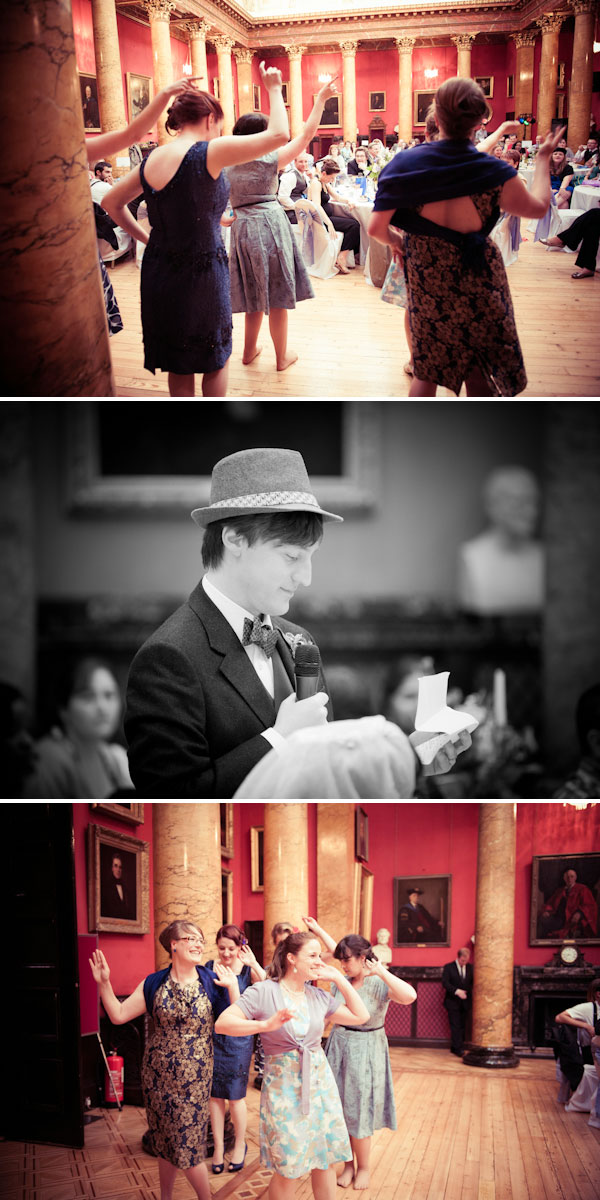 The drinks reception area at the Royal College of Physicians was also very special because I have a love of Libraries and Librarianship and it was in old-fashioned library setting, surrounded by books.

There were also lots of beautiful side rooms to take wedding photos in, and we had the whole college to ourselves.

After the speeches, the Bridesmaids did a self-choreographed tribute to me with ‘are you read for love’ by Elton John (a song I loved from my uni days). It was wonderful.

We made sure to take breaks away from everyone, just the two of us, to calm ourselves down, and to make sure we were seeing as much of we could of each other, despite the wild demands of Wedding hosting!

The day was over amazingly quickly and a bit of a blur, so we were lucky to have so many wonderful photos to look back on. 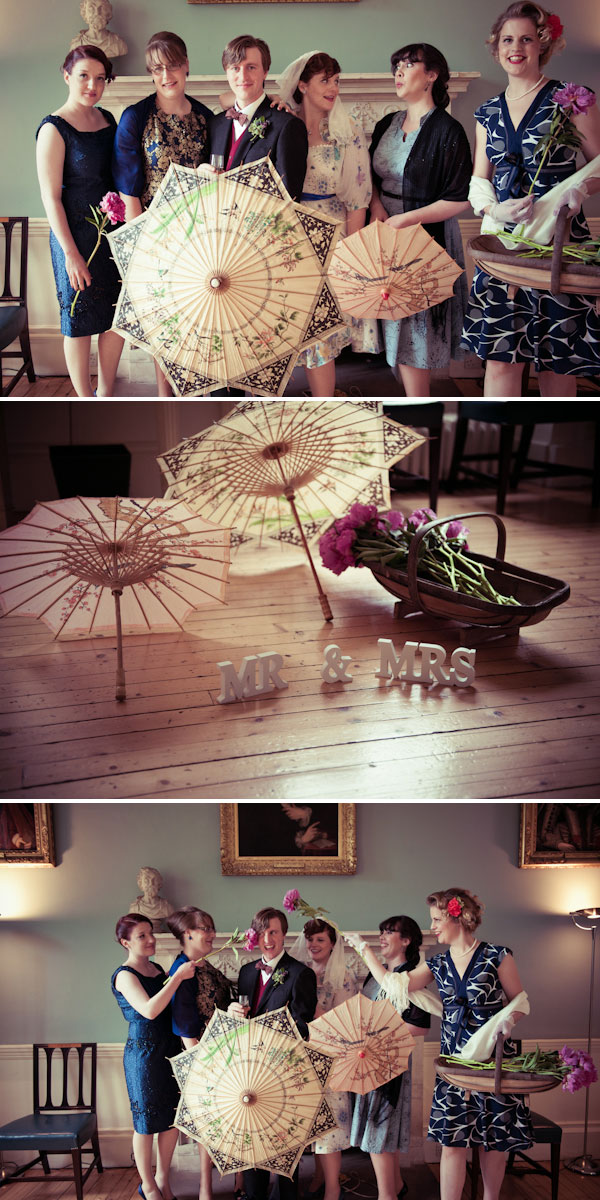 Anyone else choosing a quirky first dance song?

How about a whole in-front-of-everyone dance routine with your best girls? (!)

Big With A Leotard And Leg -Warmers Love