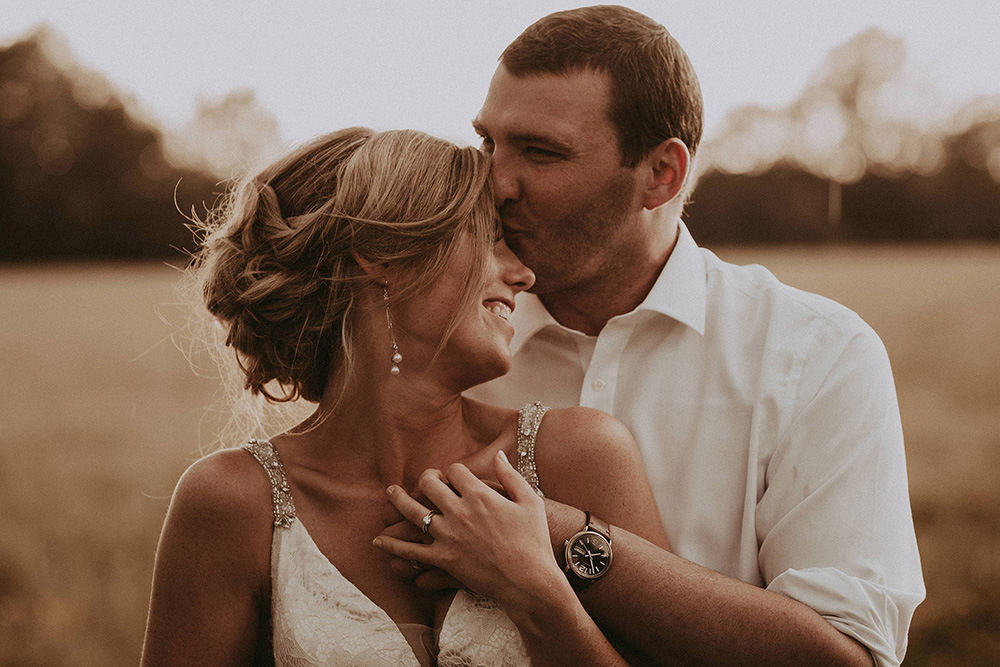 Sometimes, we all need to step back and remind ourselves what is truly important in life. If your wedding planning journey is starting to feel overwhelming or stressful – and we’ve all been there – then please take some time today to read this beautiful and brave account of one of the most incredible weddings we’ve featured on these pages. Our words cannot do justice to what it means to marry your beloved in this manner, so we will leave you in the hands of amazing Elle, a bride who epitomises what your wedding really is all about: everlasting love. (Trigger warning: please have tissues to hand.)

END_OF_DOCUMENT_TOKEN_TO_BE_REPLACED 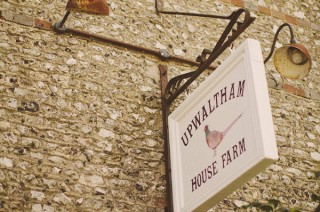 When Ant and Vicky started searching for their venue for their wedding in July earlier this year they had three specifications.

Firstly that the venue ooze a laid-back atmosphere.

Secondly that it convey a ‘country feel’ for their guests.

And lastly, that it be on a farm or in a barn.

When they finally found Upwaltham Barns, they immediately fell in love and didn’t look back.

And lovelies, when you see this delicious array of images below, all captured by the wonderful Ed Peers, you’ll completely understand why.

We have a bride swathed in cappuccino coloured lace, a dapper groom complete with pipe, clouds of gyp and an adorable breakdancing youngster.

What’s not to love?

I’ve never been a really girly girl and originally was determined not to be a bride who spent huge amounts on a dress. I bought one online and when it arrived it was beautiful, but I never really felt comfortable in it and it didn’t make my mum cry (she cries at everything).

I reluctantly booked a few appointments at wedding dress shops and stumbled upon the gem that is Bridal Rogue Gallery in central London. The minute I walked in they made me feel comfortable and it was much more fun than I expected.

I had always liked lace and when I tried on their ‘Simone’ dress in cappuccino I loved it. Return trips with more bridesmaids and a suitably teary mum confirmed my choice and I joined the legions of brides who overspent on the dress, but didn’t regret it for a second.

A Most Prized Possession

My most prized piece of jewellery was a ring that belonged to my grandmother. It had particular sentimental value as a year before my parents had been burgled and all of the jewellery my mum had inherited from my grandmother was stolen, apart from this one ring which, thankfully, she had with her at the time. It meant a lot to me to be able to wear it.

For my headpiece the ladies at Bridal Rogue Gallery helped me out by taking the appliqué from a Filippa Scott ribbon bracelet I liked and putting it onto a band for me.

When it came to shoes I didn’t want anything too high. Ant and I are roughly the same height so I didn’t want to tower over him and am rubbish at walking in skyscrapers anyway. I got a pair of ‘Anya’ from Rachel Simpson in mink suede with gold detail that went really well with the dress.

They were so comfortable I wore them all night long. 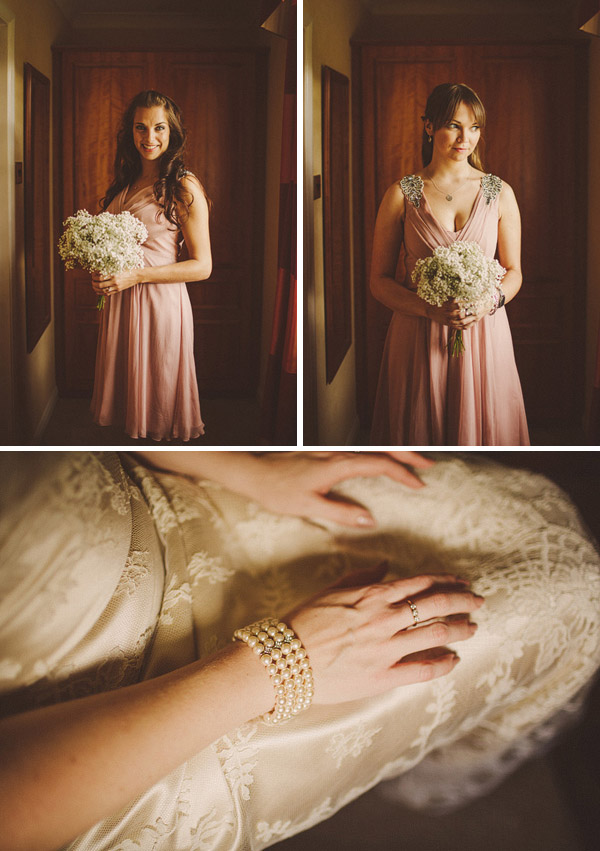 The bridesmaid’s dresses were much harder to find then I ever imagined. Although we didn’t have a set colour scheme for the day I decided I wanted them to match the colour of the flowers, so we were looking for a pale pink. A few options were tried and swiftly returned and thankfully my lovely maids were very patient with me.

On one, slightly panicked, shopping trip just a few weeks before the day I did my best impression of Supermarket Sweep and tore round a department store grabbing anything in the correct hue. One of these was from Almost Famous and it looked stunning on all of them. It was such a relief, and they matched the flowers perfectly. They teamed them with nude shoes and did their own hair and make up.

I decided to have quite natural make up in pinks and browns which went nicely with my dress and flowers. My make up was done by Arabella Hewitt who did a fantastic job of keeping me calm in the morning and was great fun to be around. I discovered Arabella when talking to her mum Meera who runs Full Bloom and did our flowers, so we kept it as a real family affair.

When we had discussed flowers Ant and I both liked the idea of keeping them fairly informal and having a country style element to them. We met Meera from Full Bloom at an open day at the barns and she had an example of a Memory Lane Rose buttonhole with her.

We loved the slightly vintage look to it and felt it would fit the style of our day, it was combined with some Gypsophila and Rosemary for my bouquet, the bridesmaids just had Gypsophila. They did such an amazing job, the flowers were absolutely stunning.

Ant wanted to get the best man, ushers and my dad a suit to keep, so from the outset we were looking to buy rather than hire. With 5 suits to find it wasn’t easy and Ant spent a lot of time pouring over various websites. In the end he managed to do an amazing job and got them all three piece suits in the Austin Reed sale.

They teamed them with winklepickers and polka dot cravats in different colours with Ant tying it together with a multi coloured number. He looked incredibly handsome, which made walking down the aisle much easier!

One of my favourite things about the day was my gorgeous car. My dad has always had a thing for Jaguars so when I found a vintage E-type for hire from Vanilla Classics I just had to get it. It was nice to just have the two of us in the car going to the venue and, even though it was only a short journey, he loved driving it.

Photography was always very important to us, it’s the one thing you keep forever and we wanted to get it right, plus I am a bit of a camera geek. Neither of us are fans of staged photos and when we found Ed Peers we thought he would understand what we wanted. Meeting him confirmed all that and really put us at ease.

A number of guests have commented that they hardly noticed he was there, he blended in so well. The pictures he took of people laughing and enjoying themselves are exactly how we wanted to remember the day. I cannot thank him enough!

If Music Be The Food Of Love…

Music is a big thing for both of us, but more so Ant who is usually found with a guitar in hand.

Even our reading, read brilliantly by Ant’s sister Laura, was the lyrics from Bob Dylan’s ‘Wedding Song’. For the first dance Ant let me have one of my all time favourites – The Traveling Wilbury’s ‘Handle With Care’.

Ant wanted to make sure that we had the right music on the day and a band that could keep everyone dancing.

He found The Tumbling Dice and they had just the sort of set list we were looking for with a mixture of old and newer rock n roll, something for everyone but no cheese! They were perfect and had the dance floor packed all night long.

We also had a brilliant blues player called Lou Glandfield, again found by Ant, who played in the courtyard after our ceremony. Everyone loved him.

Music very quickly became the theme of our day and once it did everything seemed to fall into place. We made our own invites which were made to look like CD covers with a picture of us at Glastonbury on the front. I made table confetti from old music paper and we had different flavour cider’s to drink after the ceremony which gave it a festival vibe.

Continuing the music theme we named our tables after all our favourite artists with the top table being Neil Young. I also walked down the aisle to his song ‘Love is a Rose’. Neil Young is an obsession Ant inherited from his dad, who passed away last year. It was really hard not to have him there but good to know he would have loved those choices.

For our favours we decided to do CD’s with songs from the day so our guests had memories to take away with them. We found a brilliant company online called Band CDs who make CD’s to look like mini vinyl. We created two CD’s, A sides, chosen by Ant and V sides by me, which we burnt at home one (very long) evening.

Without doubt our biggest stroke of genius came when we were trying to think of ideas for a photo booth in the evening. We really wanted one but didn’t have the budget to stretch to another photographer. So we decided to make a DIY version. Ant made a screen that we set up in the garden of the venue and I collected a number of different film cameras from Ebay. The light bulb moment came when we decided to tie it into the music theme and ‘The Beatles Booth’ was born.

A few Sgt Pepper costumes and inflatable guitars later you couldn’t drag people away from it and the pictures are brilliant.

All The Colours Of The Rainbow

We weren’t sure what to have for a cake but wanted to make it a bit different. I saw a picture of a rainbow cake and thought they were a really fun alternative and Ant agreed. A friend of ours, Lauren Prater, made us a two tier cake with cupcakes as well. She really surpassed herself and not only did it look stunning but it was delicious!

I loved the fact that with a plain exterior everyone got a surprise when we cut it open to reveal the colours! I had also seen examples homemade cake toppers and thought it would be a nice touch so bought a kit from Goose Grease on Etsy and spent a fun Saturday sat in the garden painting them to look like us and making miniature bunting.

When Life Hands You Lemons

The one slight disaster we experienced happened two days before the big day. Ant’s mum had booked coaches for the return journey to our hotel and out of the blue received an email to say the company had gone bust.

Thankfully our lovely friends and Ant’s mum hit the phones and internet and found an environmentally friendly bus company that runs its vehicles on waste cooking oil. And so we ended the night on ‘The Big Lemon’ bright yellow bus and wouldn’t have had it any other way!

I, for one, am completely in love with Vicky’s beautiful coffee-coloured frock; it is exquisite and the back detail is to die for. I’m also secretly lusting after Ant’s three-piece suit especially the polka-dotted cravat – it would make the most awesome hairband.

And I also adore how both Vicky and Ant almost carried their Beatles photo booth theme all the way through to their guests’ transport…a yellow bus. Well it’s impossible to get a yellow submarine these days…

Proof that even if things don’t work out according to plan at the last minute, it doesn’t mean that everything is lost.

As my grandma used to say, things have a funny way of working themselves out.