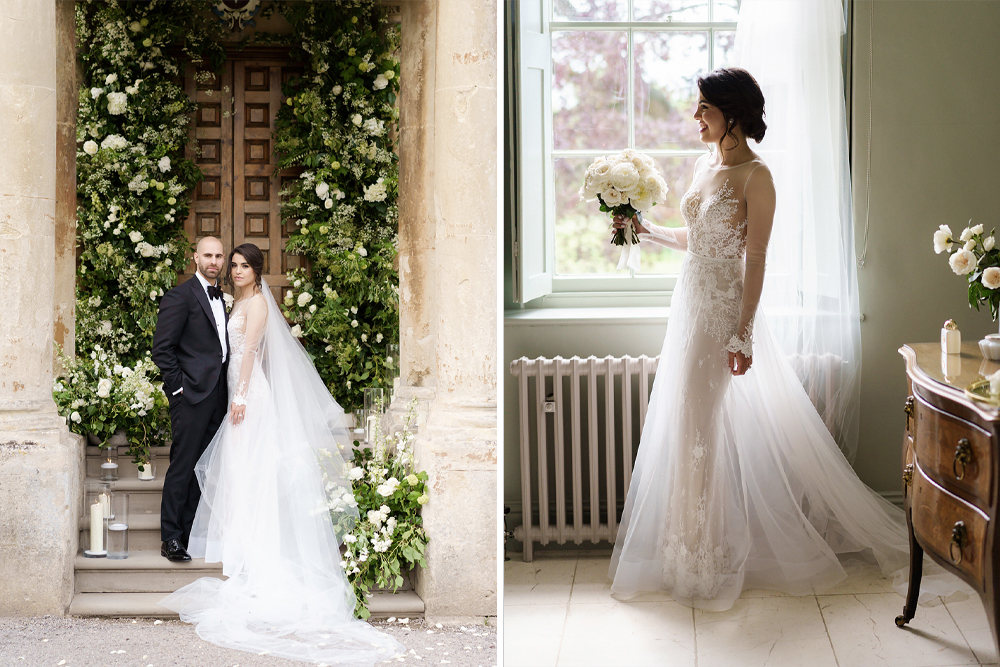 It’s time to pop on your evening wear for this incredibly elegant Persian/English fusion wedding at RMW recommended venue Elmore Court in Gloucestershire. The bride dazzles in a lace and tulle Berta wedding dress and the groom looks dapper in a tuxedo and bow tie. Plus, there’s an abundance of white and green flowers and lots of super-luxe gold details. Just wait until you see the monumental seating chart made from an ornate gold mirror frame. WOW!
END_OF_DOCUMENT_TOKEN_TO_BE_REPLACED 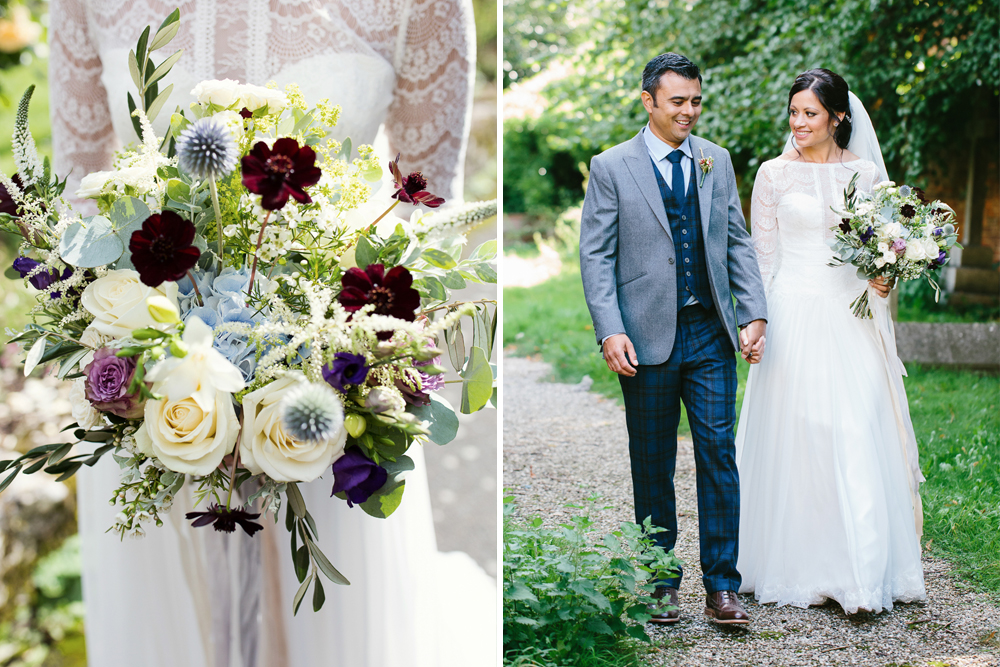 Lovely bride Natalie is a wedding planner, working alongside the infamous Louise Perry Weddings, so naturally her big day ran without a hitch. Although she does this for a living, Natalie was the bride this time around, so she was the one making the final decisions and an excellent job she did too. Her and Adrian’s wedding is full of fun, lots of music and good food, with guests clearly having the best time. Yes there are stylish and thoughtful details, but ultimately it’s all about celebrating the love, which is the most important thing.

Images come from the lovely Jasmine Jade Photography and make sure you enjoy the film from White Dress Films too! 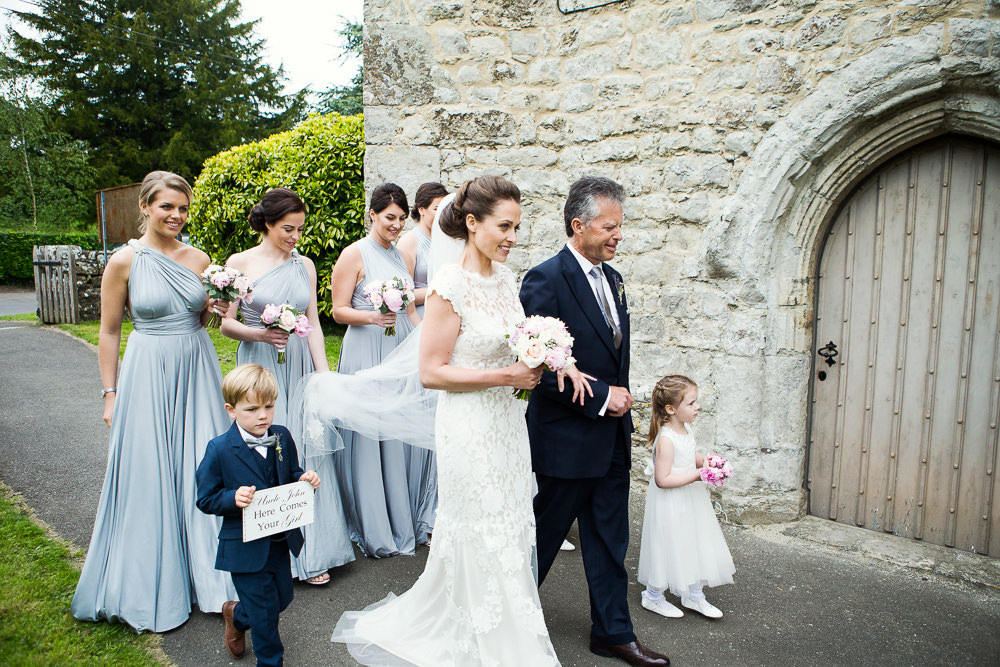 “I found Louise Perry Weddings using RMW’s recommended supplier list and instantly loved her.” To read these words from our gorgeous real bride literally fills us with pride. And what a gorgeous tipi wedding Louise planned and styled for this adorable couple.

The Kent countryside and gorgeous views of the Friday Street Farm and vineyards inspired all the rustic crates, vintage details and delicate pastel colour scheme and boy do they look fabulous.

Then to to see the Groom and Bridesmaids donning fashion from our fabulous Look Book members Jack Bunneys and Twobirds made our hearts burst even more.

Honestly folks this gorgeous country wedding captured by Jasmine Jade Photography really does have it all. 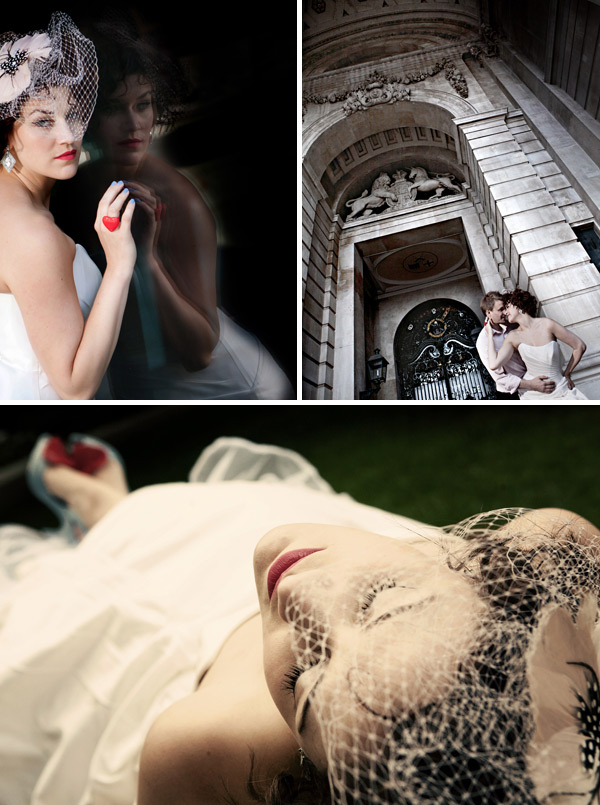 Are there any of you that have a) recently got married b) recently bought your W-day dress c) at the point of at least choosing your gown?

Are you thinking of selling it? Having it professionally dry-cleaned and put in a pretty box so you can admire it on your anniversary/pass it on to future generations?

Well then. How about trashing it/rocking it/having some lovely pictures of yourself looking truly fabulous in various guises and locations?

Yup. I’m talking about the ever popular “Rock The Frock” which up until this afternoon, we haven’t really touched on (and certainly not featured) before. And who better to demonstrate a Rock My Wedding first than a true RMW bride? Victoria’s beautiful Old School Glamour inspired Big Day was featured way back when in 2009 and now she’s back, just as witty and equally as gorgeous (if not more so to be honest – check out the movie goddess-esque black and white images….)

All of the “make you look utterly lovely” photography is courtesy of Jasmine Jade Photography.

Victoria: So, 18 months after my wedding day I put The Dress back on again… and I trashed it.

The story began a few months after my wedding in 2009 when I recommended the lovely Jasmine to a friend, and then another and then another, and then a few more. I couldn’t help it, but I think I filled up half her year with meet and greets! So a few months ago she offered to do me a Trash The Dress shoot as a wee thank you. I’d always wanted to do one but thought that my long-suffering boy would just lose his personality over it. Having forced him to do the engagement shoot, the wedding photos (which to be fair we did keep to a minimum, for this reason) and to “stand in front of that whilst I take a picture” all the way through the honeymoon he’d more than had his fill of saying “cheese”. So I shelved the idea, but never getting The Dress cleaned meant that should the situation arise, it wouldn’t be too much of a big deal to ruin it all over again as it got pretty trashed at the wedding, I have to say.

We discussed some ideas, I thought about camping it up Lady Gaga styley. Jasmine thought I’d look a bit of a wally: wedding dress + turquoise wig x gaga-esque make up = Less “Trash the Dress” and more “Tim Burton film extra”. Cool for about twenty minutes and then essentially you’ll want those pictures consigned to a drawer, forever. So we kept it simple, just funked up the hair, accessorised a little and made sure it was mainly about The Dress, rather than my face. 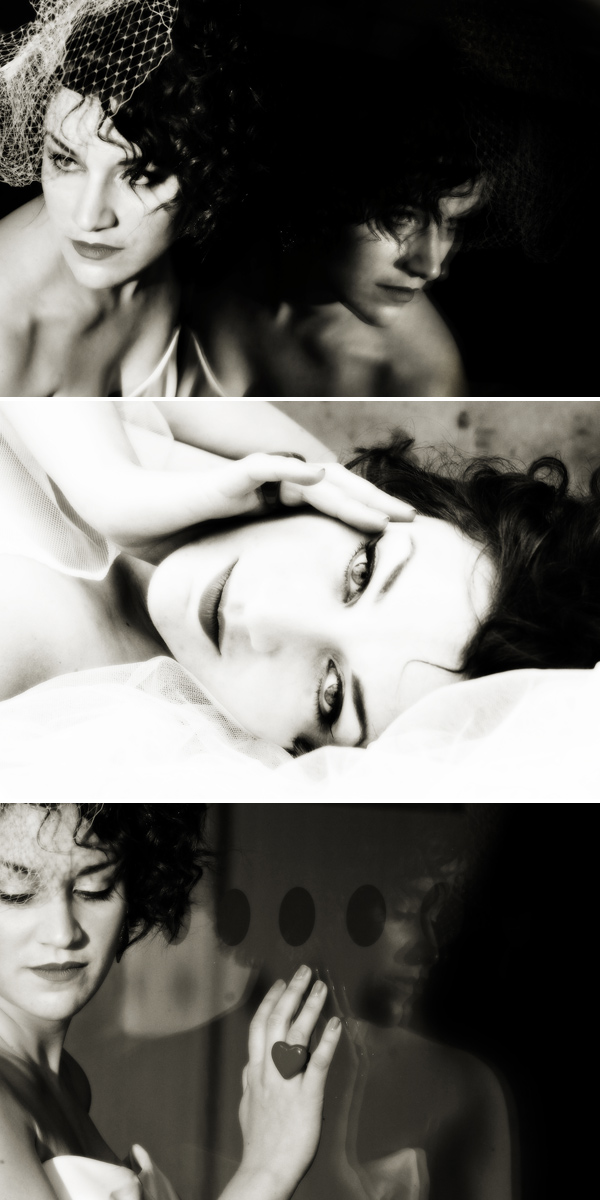 In terms of the location, we thought about the woods, a local manor house, a lorry park, we did some mild breaking-and-entering to scope out a derelict factory in the middle of nowhere. We then got the heebie jeebies when we saw one of the boards on the windows had been pulled off. Wild animals gnaw and tear and bite – they don’t lever nails out of hardboard with tools. Or cut the CCTV wires. Or collect shopping trolleys. So we started imagining The Hills Have Eyes-type scenarios and our families finding our (funnily enough, identical) cars parked by the side of the road weeks later…. Yeah, so, we didn’t bother with that one. We went for some familiar ground and decided on London.

One of my besties Claire did my hair (she’s not just a hair and fashion stylist, she also sang in Latin at my wedding! Such talent!) and then pointed us in the direction of a number of places she regularly uses for fashion shoots, with the instructions to get in quick, take the picture and then run. And so it began.

I’m not going to lie, I felt like a complete turnip and very, VERY self conscious to start with, standing on the tube/waiting at a zebra crossing/popping in to Boots for a bottle of water in my less-than-pristine wedding dress, slightly-ripped cathedral-length veil, a pair of well-worn converse, carrying a bouquet, a bright green golf umbrella and a spare pair of shoes. But after a while I got used to it and kind of forgot I was wearing it. A few tourists stopped me to have their photo with me. Random passers-by called out their congratulations or jumped out in front of me and pretended to propose (that started to wear a bit thin after a few hours), or just tried to take sneaky photos of a crazy bride chick just walking down the street. I had to explain that I wasn’t actually a bride – and that left them even more confused than before. So I decided to just go with it. An American couple stopped me on the escalators at Bank to ask me “honey, are you the Bride?” and I just couldn’t help myself. 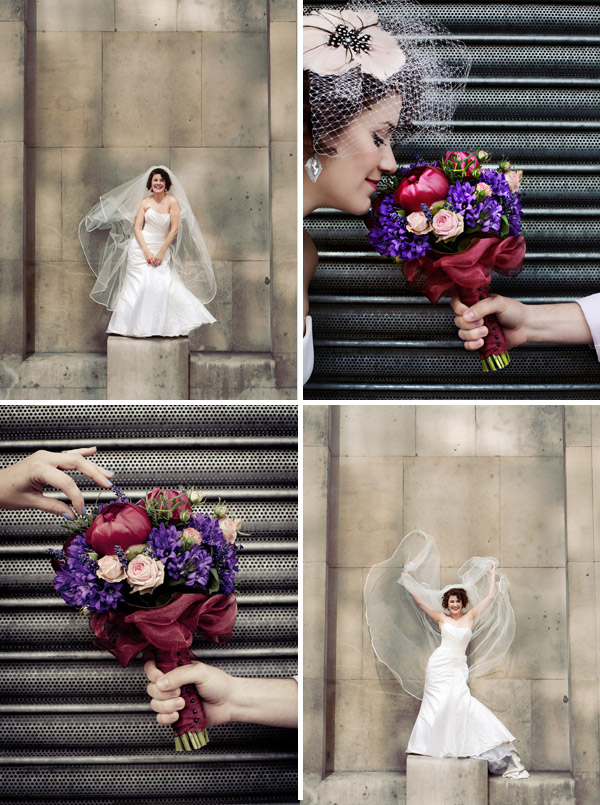 Me (acting really surprised and shocked to have been approached by a stranger): “uh. No…?”

Them: “oh, so you’re not on the way to your wedding? Are you just coming from your wedding?” (like most brides hustle to their weddings looking like a drag queen, on public transport, in trainers…)

Me: “no no, I got married aaaaaaages ago”

Them: (looking a bit worried that they might have just stopped a London-crazy to ask about a non-existent wedding): “oh, errr, congratulations”

Me: “thanks, today I’m Trashing my Dress!”

Them (thinking that I’m now defo crazy): “oh dear, did it not go well?”

(it was a very long escalator)

Me: “no it was amazing… hence why I’ve never taken my dress off, that’s why it’s a bit dirty and why I’m Trashing it before I have it properly cleaned”

(I start to remember that after a year at a US investment bank – RIP Lehman – the Americans I worked with still didn’t get my sense of humour, so I had to put these ones out of their misery)

Me: “sorry – it went great, this is a novelty thing, this is my husband (cringing with embarrassment), I just wanted some fun mementoes of the greatest dress I’ll ever own so we’re doing a bit of a location photo shoot”

And that same conversation happened about once every ten minutes for the whole day. 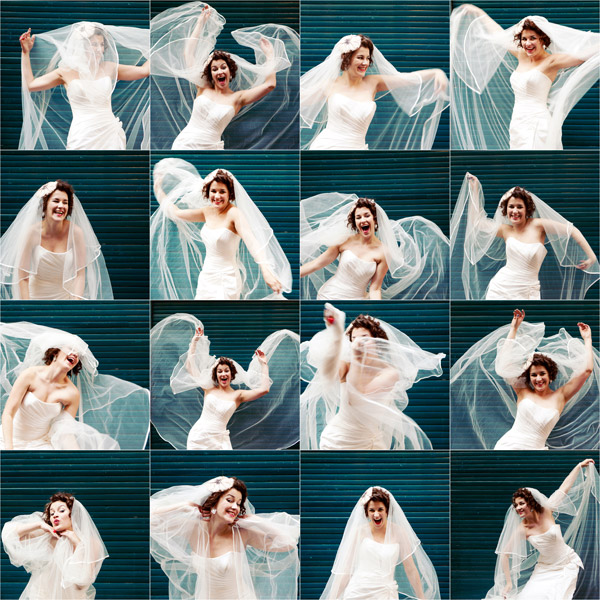 But in the end it was great. I trashed my dress, rocked my frock and truly got down in the gown – waiting for the right coloured light combination in the tunnel under the IMAX (and thus holding up all passing pedestrian traffic), flinging myself all over a small park in Waterloo (much to the amusement of a few locals, who watched me try to climb in to a bin), laying on my back with my legs in the air in a recess at The Royal Exchange (much to the surprise of a passing security guard), being chased away from the Lloyd’s Building (by a slightly less surprised security guard), hanging around outside a cake shop and trying to look normal when bumping in to a colleague from work, posing in pools of light at Leadenhall Market (a group of amateur photographers on a course couldn’t have been happier to see me), rolling around on the floor in the churchyard at St Pauls (and being slightly embarrassed when coming across an actual wedding party. Cue lots of blushing and mumbled apologies as we tried to flee in the least conspicuous manner possible – not easy in the afore mentioned get up) and pleading ignorance on the Tube when being told off by the platform guard for using flash photography. “oh – are we not supposed to?” cue sweet smiles and a quick hop and a skip on to the next train. 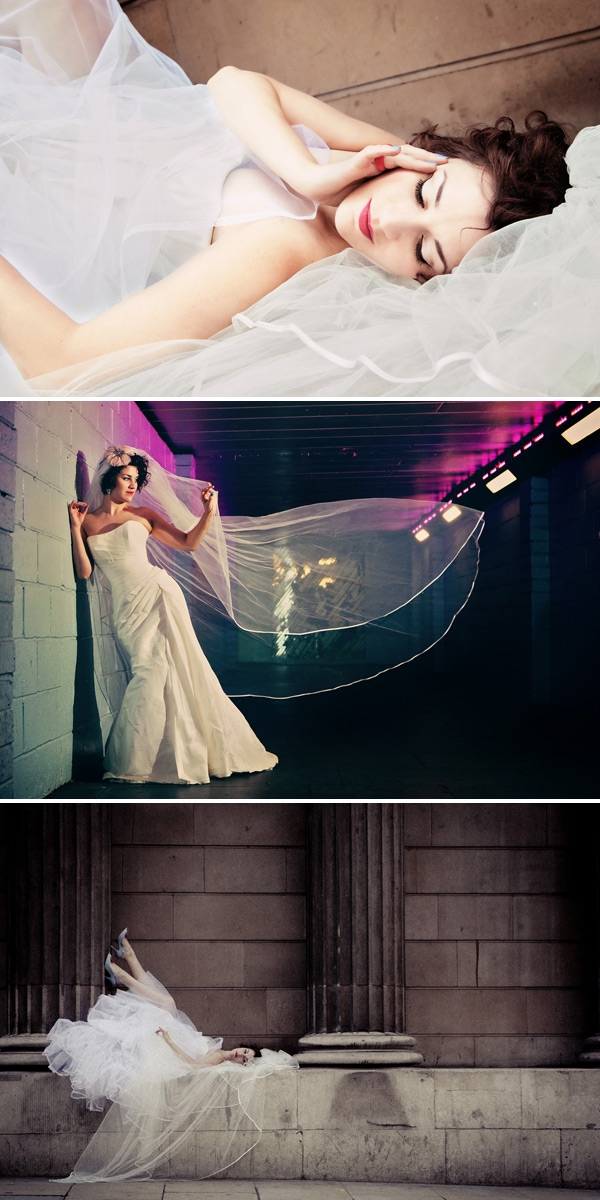 Is my dress completely trashed? I think it’s salvageable so when I have a spare hundred quid (not any time soon then) I’ll get it cleaned and boxed so it can stay in the loft until I have daughters/nieces/granddaughters and they can dress up in it, rip bits off it to incorporate in to their own dresses or re-fashion it in to something they want to wear – either on their own big days or just flouncing around in the garden… hey, who am I to judge? I’m so sentimental about things that some part of me can’t bear to sell it, but the other part of me feels ridiculous that I spent so much money on a single item that I’ll wear once. So this somehow helped alleviate the guilt slightly and it upped the “pound per wear” factor. So now it’s actually a bargain when you think about it… well that’s what I told the boy, anyway! 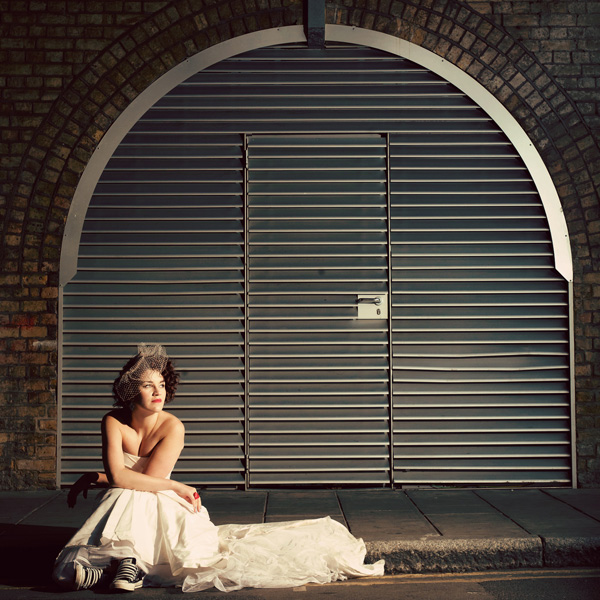 Bouquet – Karen at The Flower Mill

Maybe it’s just me but I all of a sudden have a desperate urge to go put on some bold lippy, don a fancy frock and walk the streets of London town.

Anyone else considering a Rock The Frock type shoot after W-day?

You can read Victoria’s own personal blog at Sugar Plum Slipper.