What a lovely wedding we have here. Cambridge Cottage at the Royal Botanic Gardens Kew is the sensational backdrop and location for a personal Civil Ceremony and Prosecco and Gin Party.

We are loving the two cake trend, one savoury and one sweet and the two here are a dream. Flora and Tom opted for a show-stopping cheesecake by their caterers Richmond Creative and Rock My Wedding’s The List member Designer Cakes by Elle provide’s a four tier masterpiece with apple and cinnamon with salted caramel,  red velvet,  coconut and lime,  vanilla with rose flavoured buttercream layers and a traditional fruit cutting cake. HELLO!!!

This wedding is beautifully photographed by our friend Dan at Story + Colour. You can swoon at Dan’s work over on Grace & Tom’s colourful wedding and Fran & Matt’s urban cool humanist ceremony.

END_OF_DOCUMENT_TOKEN_TO_BE_REPLACED 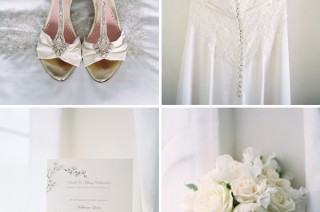 The wedding of Katherine and Rob is as sophisticated as they come. Imagine Grace Kelly, Audrey Hepburn and Marlene Dietrich all having afternoon tea at Claridges… yep, as classy as that.

From the simple stationery to the feminine colour palette to the lace-inspired cake this big day exudes elegance, all captured in that perfect afternoon light by Polly Alexandre.

Katherine and Rob were married at Kew Gardens with a civil ceremony at Cambridge Cottage and moving to the Orangery for the reception.

Be prepared to fall in love with Mondays folks. 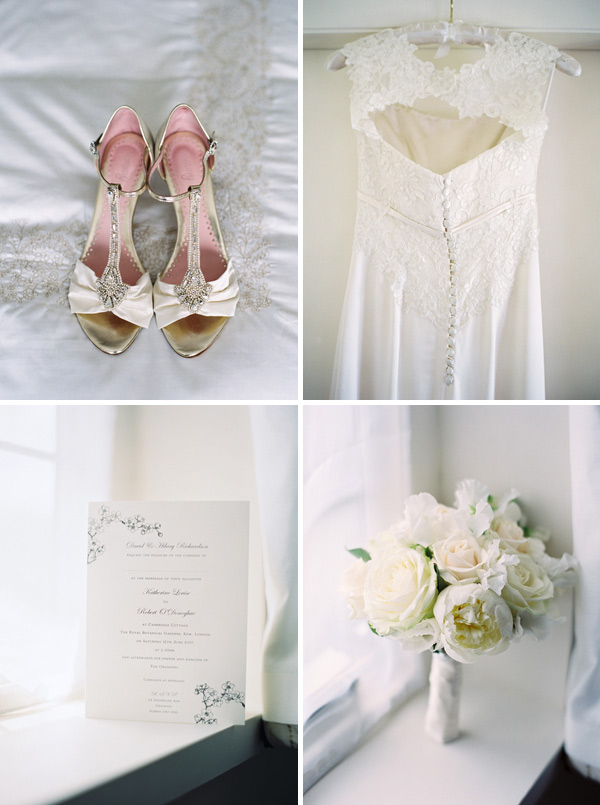 I wish I could have worn skyscraper heels but being the same height as the hubby meant I was limited to 2 inches so I didn’t look too tall in the photos. That’s why I decided to go to Emmy since you could choose the style you liked and specify the heel size. 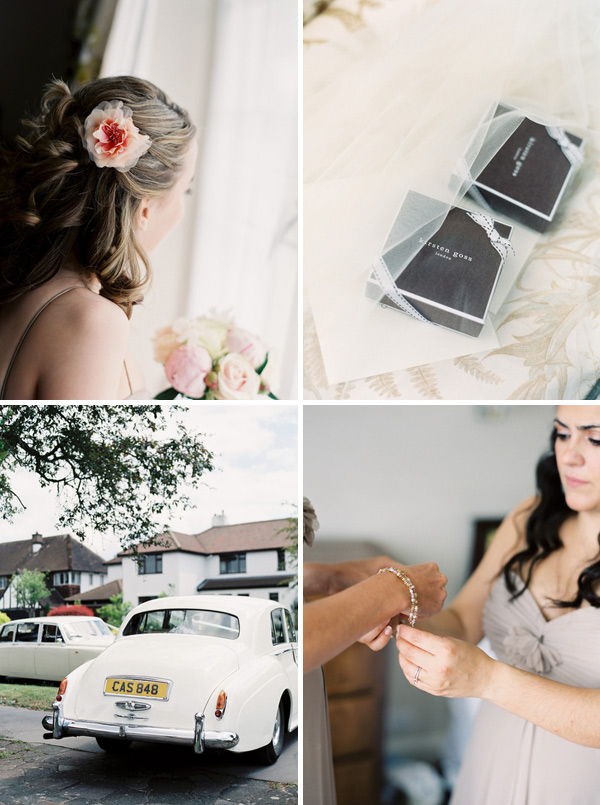 My veil and veil pin were both Caroline Castigliano. I had a half up do, and wore the veil for the ceremony and drinks reception, then for the dinner I took my hair out loose and wore a head band from Magpie Vintage. I had bought the headband first but it didn’t work with a veil, and that’s when I decided on having two looks for the day.

I used my usual hair dresser for the day since she knew my hair and what I liked. In terms of make-up, my mum and I went to the Laura Mercier counter and had a make-over. We ended up hiring that lady (who was a free-lance make up artist) and she came to our house on the day. 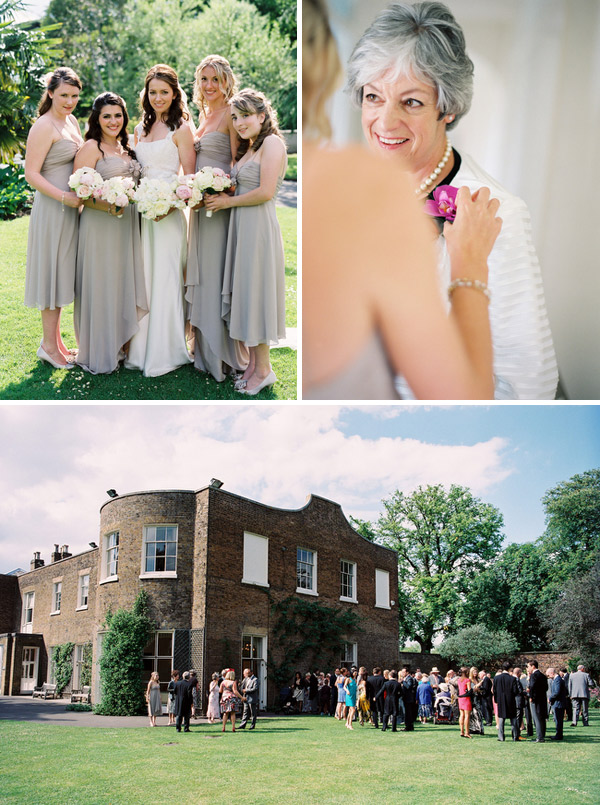 My dress was called “Hayley” by Sharon Hoey which I bought from the Caroline Castigliano shop. I had so much fun trying on lots of different styles including big meringues, but I liked the simplicity of the dress and the a-line style. I think the back of the dress was what sold it for me. 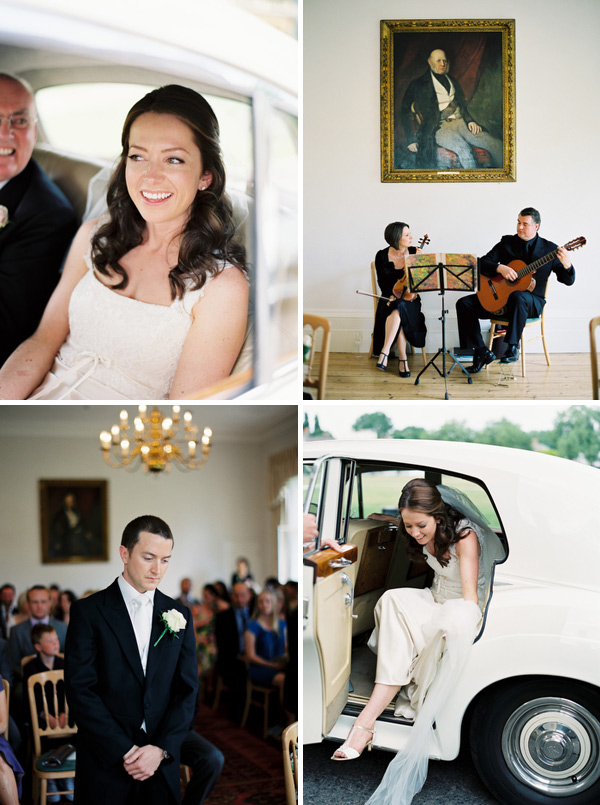 Rob had his shirt, tie, and waistcoat specially made at Gary Anderson, and his hired suit was all black so as to have something a little different from the groomsmen. 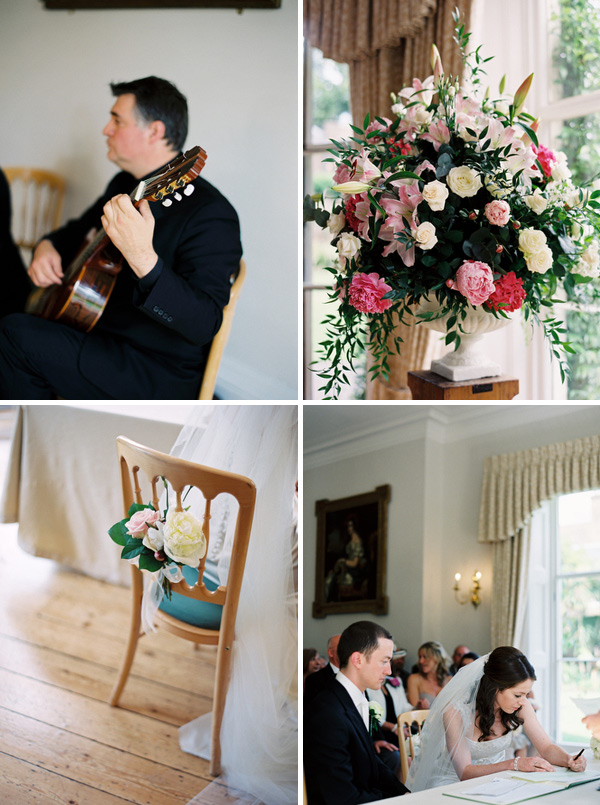 Polly Alexandre really appealed as I loved her film work and reportage style. As soon as I met her, I felt we had a lot in common and she put me in ease. She was someone I felt I would be happy sharing the day with.

Our wedding was at Kew Gardens. We had a civil ceremony in Cambridge Cottage and then moved onto the Orangery for dinner. We chose this date as it was a Saturday which fell on the 14th anniversary of Rob first asking me out! 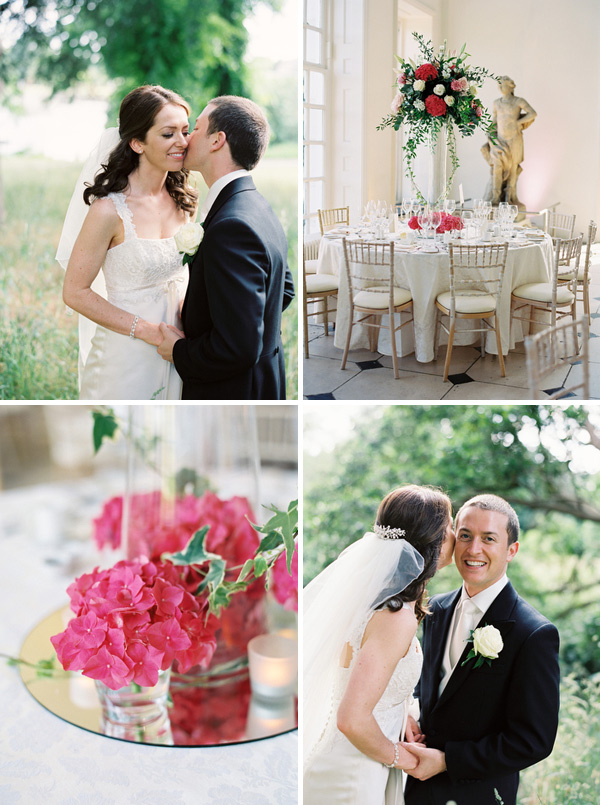 The cake tasting was one of the fun parts of wedding planning (after diamond and dress shopping!) – my maid of honour Harriet always seemed to be available when there was cake tasting to be done!

Zoe Clark did the cake, I saw her designs in wedding magazines and liked her ideas when we met. She suggested basing the cake on the dress, so I gave her a lace sample and she matched the design exactly. There was a fruit cake layer, a lemon cake layer and then a banana cake on the top. Yum!! 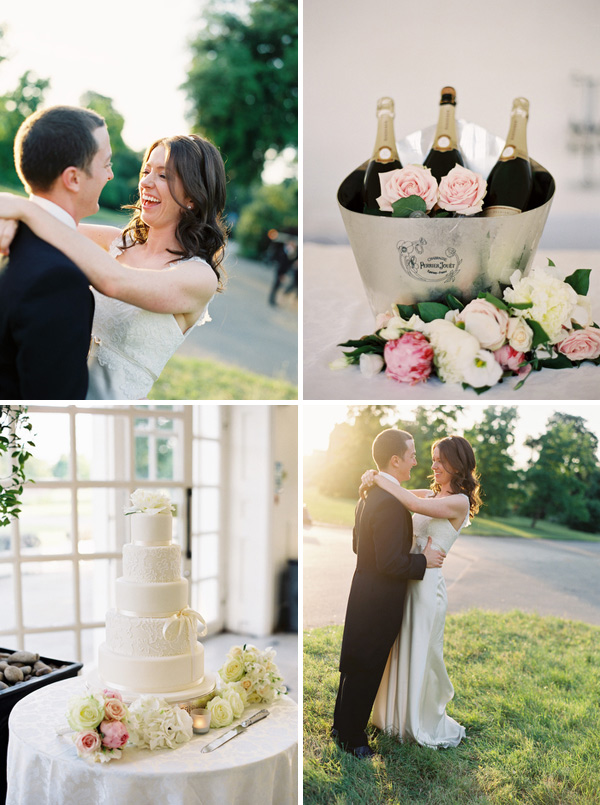 I love lillies and roses, and Russell at Blomster Designs did an amazing job. He was a lovely guy to deal with and was reasonably priced compared to other London based florists. I found him through a personal recommendation from our best man. 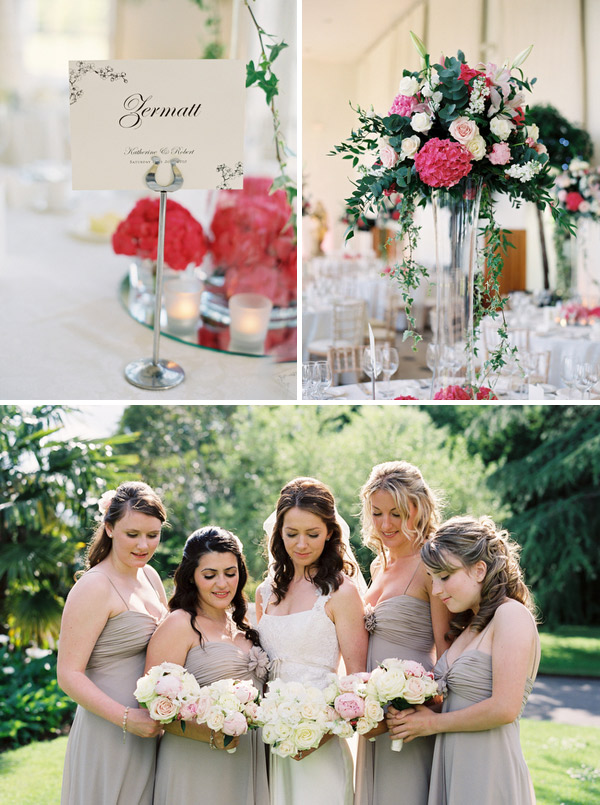 All Kinds Of Delicious

My caterers “Lodge Catering” were also fab They were great at event planning, all the staff were so professional, and of course the food tasted great. We sorted out our own wine and champagne through my maid of honour’s father who works in the wine trade. The catering company set up a really nice looking bar in the evening and did so much extra that I wouldn’t have thought of asking. 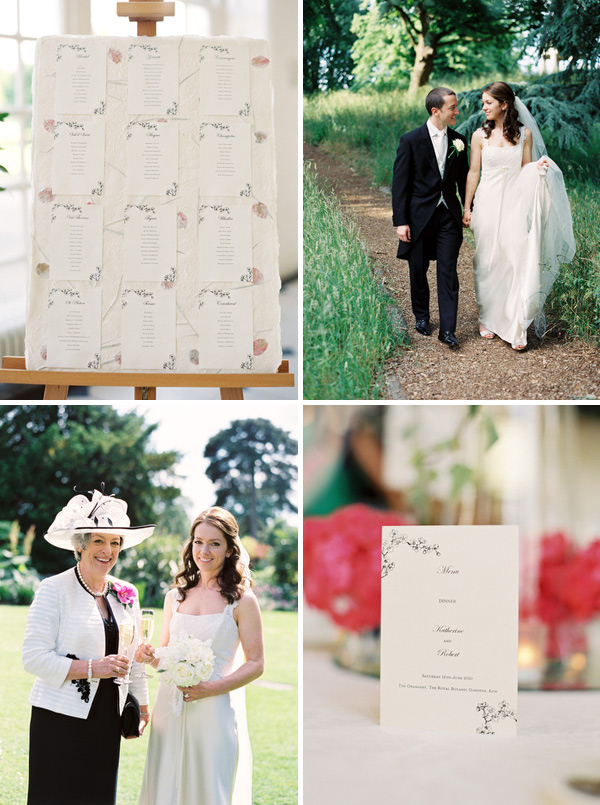 Music Is The Food Of Love 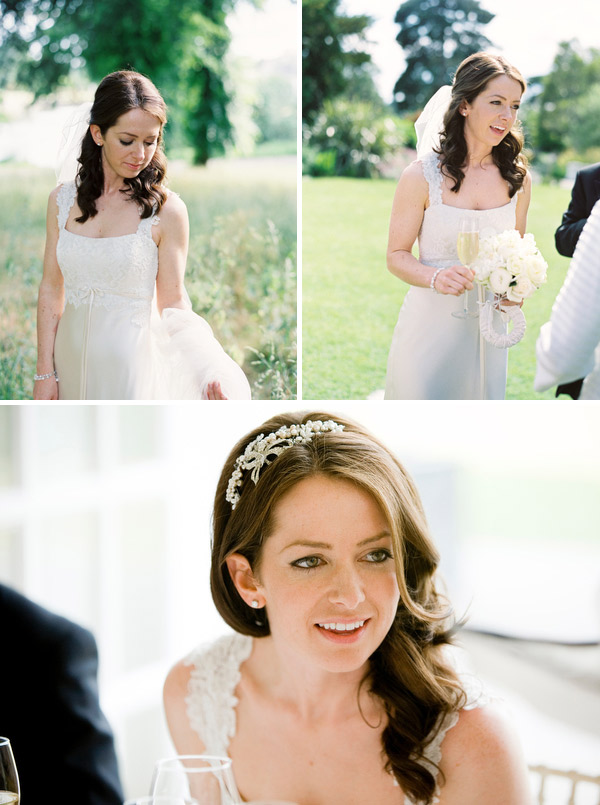 During the meal, we had our own playlist on an ipod. For the dancing, we hired a 6 piece band called Groovin High booked through Prelude Entertainment who were amazing. They played everything from old classics, to Amy Winehouse and Kings of Leon. The dancefloor was always full. 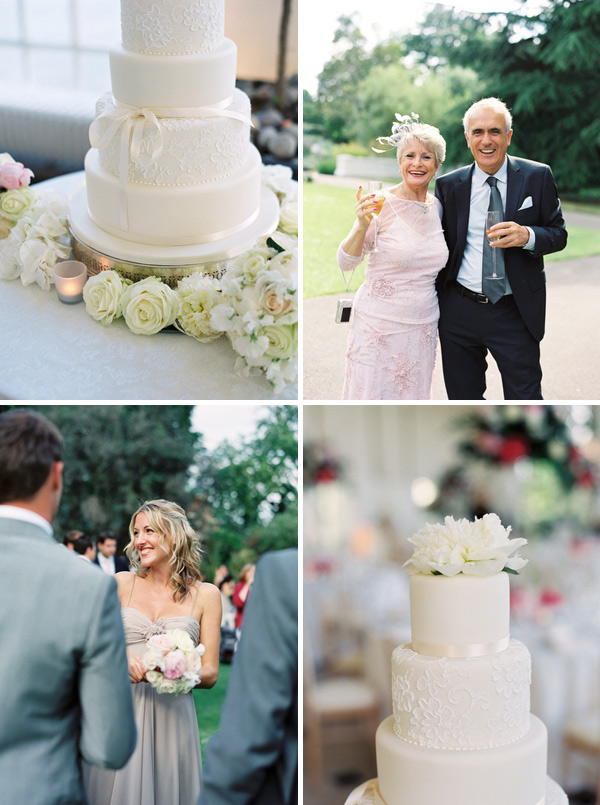 The wedding cars were hired through Classic Hire. I had a really nice driver who took my dad and I for a circuit around Richmond Park prior to going to Kew which was really lovely. 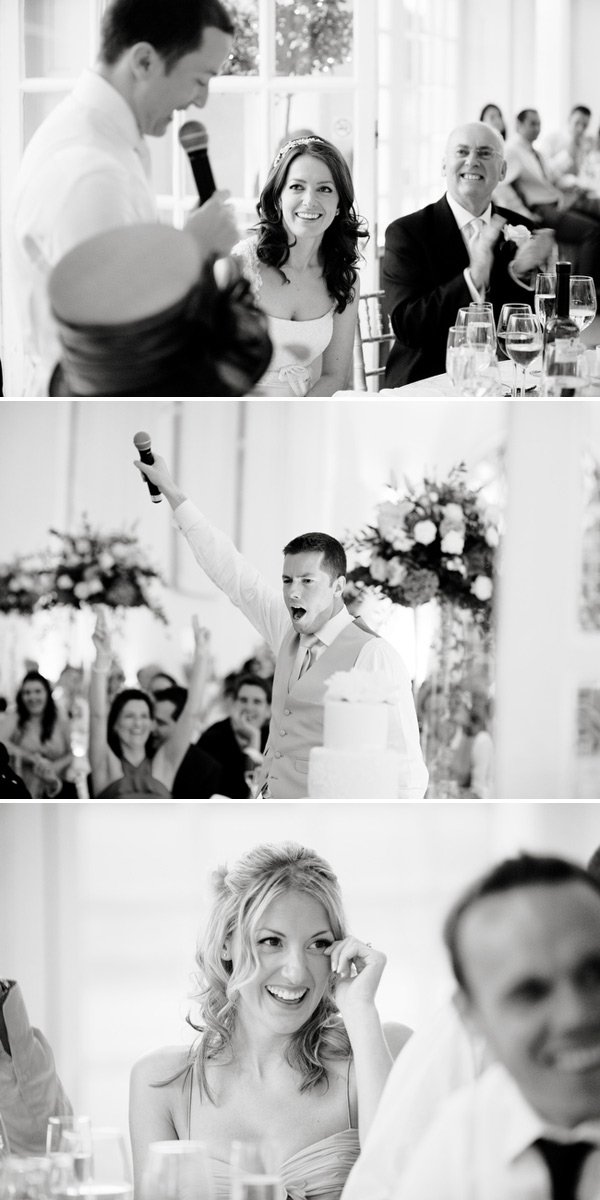 I would also like to mention my videographer Rachel Knights who did an amazing job. She shot our wedding in super 8 film giving it a romantic and nostalgic feel, the company is called I Do Films.

My main advice would be to relax on the day… you’ll have done everything possible, so try not to stress if something goes wrong. 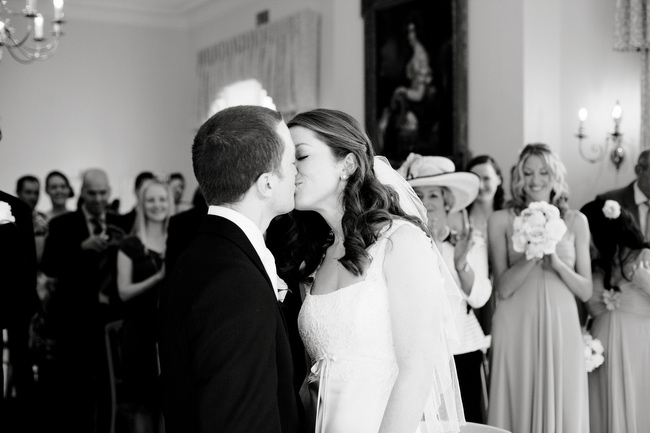 Loving the Middleton-esque half-up do for day and changing into a relaxed down do for evening with a quick accessory swap.

And if you are stuck for honeymoon ideas bride Katherine actually organises romantic trips to Latin America so it may be worth getting in touch, or of course just say Hi and ask if you can steal her style…

Very tempted to do either/or to be honest…