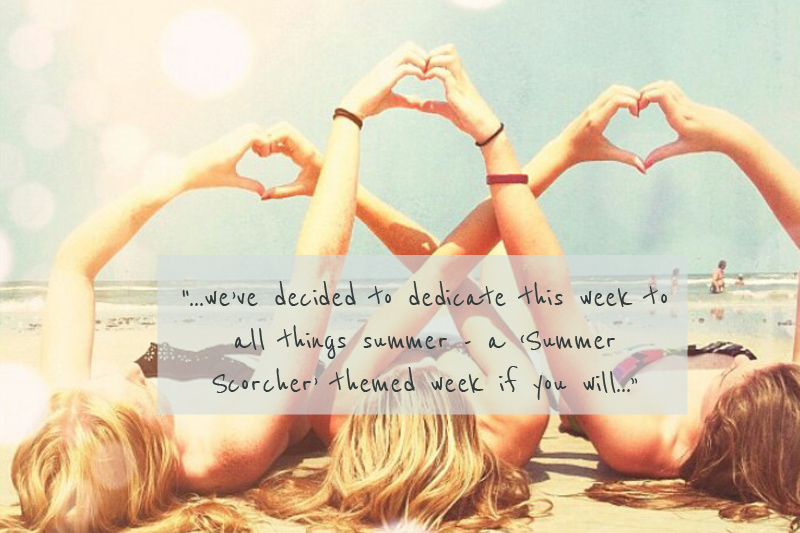 I’m hot and I don’t mean in a kick-ass, lip-pouting, boys-eat-your-heart-out kinda way. I mean in a slightly clammy, I can’t be bothered to do anything with my hair, I only want to wear a bikini state of affairs.

Don’t get me wrong I LOVE the heat and I’m also tickled by the fact that our fickle meteorologists are calling the current weather situation ‘a heatwave’. Funny, back when I was a wee one, this would just be a standard summer but perhaps that’s the mind playing tricks on me.

Any bride marrying in either June, July or August dreams of being blessed with glorious weather – I mean you don’t pay a premium for marrying at the peak of summer for nothing you know – but I think even the lucky couples of the last few weeks will be amazed at their own good fortune.

And so in homage to the sunshine, to the scorching days and the balmy nights, we’ve decided to dedicate this week to all things summer – a ‘Summer Scorcher’ themed week if you will.

To kick things off it seemed fitting to share an inspiration post with you – designed with the intention of helping you gorgeous lot with making your guests as comfortable as possible when things are HOT HOT HOT on your big day.

There’s nothing worse than going to an event, wedding or otherwise, and feeling uncomfortable in the heat. Your make-up begins to slide around and off your face, sweat starts to trickle in unmentionable and countless places and even something as simple as clutching your handbag feels as if you’re holding a ten ton weight.

But there’s no need to fret if you’re expecting the mercury to go sky high on your big day -there’s many simple methods and means to make sure that your guests stay cool without breaking the budget.

I’m sure that the vast majority of you will have already seen the programme/ fan combo but for those of you that haven’t it’s a fantastic way of amalgamating your order of service and a cooling device into one simple prop, plus you can DIY it too. Usually the bride and groom’s names are scrawled along with the wedding date onto one side of a supersized piece of card – I love the heart and shield shapes making the rounds at the moment – and the order of service is daubed on the other. Add a rounded stick and bob’s your uncle you’ve got a fan to boot!

If you’re looking to add an extra special touch to your festivities then it might be worth investing in some parasols for your guests too. Presentation is key so consider storing them in an old tea crate or a large wicker basket with a sign to encourage your nearest and dearest to take one. They also make for epic portrait shots or a handy screen if you’re a little bit shy but still want to give your new hubby a snog.

If you’re keen to take it that one step further – hell why not?! – then make like the RMW team and build a fort in the grounds of your venue. All you need is some sheets, a few blooms and a comfy rug and you’ve got yourself a shaded sanctuary where guests can relax. Plus it would make an immense photobooth when the sun goes down too!

Consuming enough fluids on hot days is important at the best of times but even more so when alcohol is added into the mix. Make the non-alcoholic drinking process fun by introducing an interactive element for your guests. Building a lemonade stand complete with unique vessels, straws and miniature umbrellas and flamingos is one way of sparking your guests’ interests. Introducing the comedy factor through utilising unusual containers as a fridge is another – beer barrow anyone? I’ve even seen a vintage canoe used in the past too!

It’s not just strategic and considered pieces of big day decor that can make your guests more comfortable; it’s so easy to make simple tweaks to your menu so that your culinary treats can too.

Keep your nearest and dearest cool by offering sweet miniature lollipops alongside your savoury canapés at your drinks reception. If you’re after something naughty then I love these neon ice pops at the top here created from sprite and gummi bears would you believe it! If you’re after something a tad healthier try mixing slices of mango with yogurt instead. Finish by scrawling naughty phrases on the ends of wooden lolly sticks.

I love the ever popular DIY of freezing beautiful flowerheads and vibrant leaves into ice cubes as a way of pimping your drink. It’s worth investigating which flowers are edible so that guests can rest easy once the ice-cubes have melted. My favourite idea is that of using herbs rather than flowers for perfectly flavoured water – mint anyone?

It’s also worth considering serving small portions of ice-cream and sorbets in the evening when your nearest and dearest have raved (and sweated!) the night away on the dance floor. If you’re looking for something a little bit different but still refreshing try unconventional flavours – basil ice-cream is a particular favourite of mine.

Lastly, replace traditionally hot tea and coffee refreshments after dinner with iced versions like this cherry infused iced tea in a mason jar – perfect if your big day is a vintage rustic inspired affair. If you’ve got little ones attending or picky guests that drink neither tea nor coffee (like me!) then substitute caffeinated drinks for personalised bottles of old fashioned lemonade.

And then we have the hot hommes which granted is a tenuous link to the whole ‘Summer Scorcher’ themed week but we just couldn’t resist. For me there’s nothing that quite beats a gorgeous man in a clean well-fitting white t-shirt…or in black tie…or with his sleeves rolled up ready to get stuck into something…or even in a partial state of undress.

Ahem, let me rephrase that. There’s nothing that quite beats a gorgeous man.

You’ll see that Mr Gosling makes an appearance – good day to you Sir! Oh and there’s Eddie (personal fave of mine) and we couldn’t resist a snap of Jonny either. Don’t say that Team RMW don’t spoil you lovely lot.

Which hunk is your favourite?

So are you enjoying the sunshine or are you an ice queen? Have you been to any weddings since the ‘heatwave’ began? Did you melt?

And what thoughtful touches did the couple provide for you to ensure that you stayed as cool as a cucumber throughout their big day?

I’m off to put my feet into a bucket of cold water which is as near as I can get to a paddling pool right now.

Lolly is a self-professed frustrated florist and styling maven with an endless passion for all things pretty.
Tags:real wedding

30 thoughts on “Take One Summer Scorcher.”