Morning peeps, guess where we are going for todays dose of W-day Pretty?

Lauren and Nick married in July 2011 at Frederick’s Bar & Restaurant on Camden Passage, Angel Islington in… London! (was that not clear?)

I love the contemporary colour pop setting for this city soiree, and make sure you have a look at the cake which the bride proudly made herself… the flowers on it are a masterpiece.

Photography today is by Ben Tomlin at Touch Photography. Lauren and Nick couldn’t have chosen a better person to capture those clean bold colours, the gorgeous subtle details and of course, the candid reaction of friends and family.

We got engaged at the end of November 2010. No sooner had we finished celebrating than it was Christmas. And in a flash we found ourselves in January facing the reality that if we wanted to get married in the summer we’d only have six month to organise it. We both liked the idea of getting married abroad in Greece or Italy, so initially we set about looking for large private villas that we could hire for the wedding. But we thought we should look into some local venues as a back up plan and on Islington’s registry office website saw Frederick’s listed as a licensed venue. Nick knew the local favourite well and we went to have a look – it was only at the end of the road after all! We both loved it and could see ourselves getting married there. The restaurant is closed to the public on Sundays, but available for exclusive hire for weddings and parties. When we found out that the only available summer Sunday left in their diary was one that we’d potentially earmarked as working for everyone we decided it was fate, and booked.

I wanted to find a dress that would look right in such a modern and understated venue – something a bit different from the full-skirted, sweetheart-necklined bridal gowns that are everywhere. But alternatives were proving very difficult to find! So initially I thought I’d get one of these dresses shortened into a 1950s style tea-lenth dress, but something was holding me back. I visited Morgan Davies in Islington and explained my situation to Annalise. I let her pick out several dresses for me to try on, including one from my favourite designer Jesus Piero. When I put on ‘the’ dress, I instantly loved it. The halter neckline was different, the high waist band elongated my body and the whole effect was very flattering. But my parents, who were with me at the time, weren’t sure about the dress. My mum said, “It looks like something you’d wear to accept an Oscar in.” While I was secretly thinking how much I’d love to look like a movie star on my wedding day, it also meant a lot to me that my parents like the dress. So I left it. But I couldn’t stop thinking about it and ended up going back to try it on again twice more with my friend and bridesmaids before deciding to go for it! I’m glad I did – as one guest put it in a thank-you letter, “the dress was beautiful – glamourous, sexy and elegant.”

The dress was very plain, with simple lines. I knew that I wanted to add some of my personality to the dress by adding a fascinator with a retro, short, net veil. My sister and her boyfriend are friends with a newly qualified milliner, and they very generously offered to put me in touch with her and pay for the fascinator as a wedding gift. I worked closely with Mary of Mary Franck Millinery to create a bespoke freshwater pearl and crystal headpiece, with a detachable net veil. It really made the outfit.

I also borrowed a vintage crystal bracelet from my mother to add an extra bit of sparkle.

I am quite short, so I wanted to wear heels for height but I also wanted to be able to dance all night! Nick actually chose my shoes! – Rachel Simpson Venetia shoes with a 8.5cm heel and concealed cushioned platform. They are extremely comfortable and the pink suede detail tied in with our pale pink and pearl theme.

My long-time home hair colourist (and now friend) Zoe does hair for weddings so I booked her to do mine! I had my hair curled and then put up off-centre to accommodate the head piece.

I went to several trial make-up sessions at make-up counters in Selfridges. In the end I decided I would prefer to do my own make-up. I invested in some new make-up and professional brushes from Bobbi Brown to ensure I got a great finish, and I’m still using it all today! I also had eyelash extensions put in to accentuate my eyes – much more comfortable than fake eyelash strips and eliminates the need for mascara.

I love peonies and they had already inspired the design of our invitations and our wedding cake. When it came to ordering the flowers for the wedding we discovered that the peony season had come early this year and the florists could not guarantee that they would still be available by 10 July! We then shopped around for similar-looking alternatives. One of the florists had recommended looking at The Real Flower Company. They have a concession in Selfridges in London so we went to have a look at their range of beautiful, unique, highly scented roses. We chose a mixture of the ‘Peony Pink’ variety, which as the name suggests look very like a pale pink peony, and ‘Groupie’, a white peony-like rose. These exclusive roses were going to be very expensive to order via the florist, so I rang The Real Flower Company direct. I ordered the bridal and bridesmaids bouquets, button holes and corsages to be delivered to Selfridges the day before the wedding. I also ordered 75 single stemmed roses and fragrant herbs, which were delivered to my parents house and kept cool in the basement. We made up the table arrangements ourselves on the morning of the wedding, using vases from Ikea and white pebbles from a garden centre!

Wanting to keep things relatively informal, we asked our Fathers and Nick’s brother, the best-man, to wear light grey suits and we bought pale pink matching ties for each of them. My two bridesmaids chose their own pale grey dresses from Reiss. I bought matching grey freshwater pearl bracelets from Tiger Lily Trading as gifts for the bridesmaids, which I gave them on the morning of the wedding. 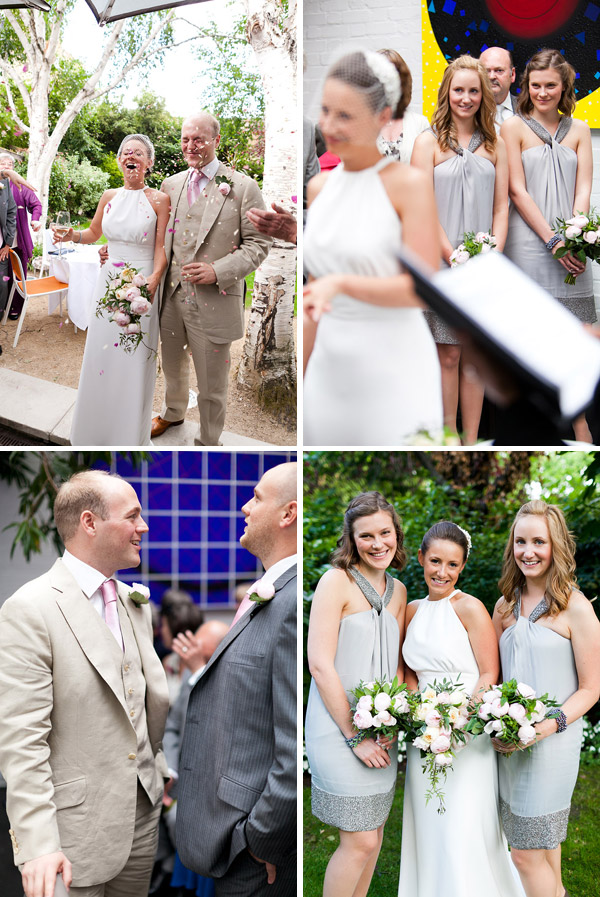 Nick wore a bespoke, hand-made, 3-piece suit by Charlie Allen in Islington. It was an extravagance, but he could not think of a better occasion to treat himself! He chose a natural linen fabric and tan leather Grenson shoes, which he bought at Nigel Hall on Upper Street.

The photographer was the first thing we booked after the venue. We found Ben Tomlin at Touch Photography after looking at lots of portfolios online. We were very impressed with Ben’s journalistic, rather than staged, photographic style and knew we wanted something similar for our big day. When we met Ben he was such a nice guy, and exactly the type of person you wouldn’t mind poking a camera in your face, even when you’re at your most stressed. Ben put in a mammoth effort on the day – even racing me in my black taxi across London from my parent’s house to the venue – and I think he was one of the last to leave! We’ve had so many comments from our friends on how our wedding photos are some of the best they’ve ever seen.

A Bit Of Bad Luck?

I decided that I wanted to make something for the wedding and the cake seemed an obvious choice, despite caution from my Czech friend Lenka that it’s bad luck for the bride to bake the cake herself! We both love fruit cake and it can be made well in advance – in fact its better if it is. I followed Delia Smith’s rich fruit cake recipe and made three tiers, covered with white marzipan and ivory fondant icing. I made sugar paste peonies to decorate the cake and learnt by following an online tutorial. I also painted the piping around the edge of each tier with an edible pearlised lustre to make it look like pearls. The sugar paste flowers were so good that some people thought they were real flowers!

We both wanted a live band. We found an amazing band called The Suburbians. We were really lucky to have them play as they have subsequently gone on tour in Canada and launched their debut album – I think we were their last ever wedding! I made sure everyone joined me on the dance floor and the band repaid me by allowing me to join them in singing ‘Brown Eyed Girl’. At the end of the night, when everyone wanted an encore, they sang one of their own songs ‘Red Dress’, but changed the lyrics to ‘White Dress’ – loved it!

Our first dance was to ‘Crazy Love’ by Van Morrison. Nick chose it, he says the lyrics encapsulate how he feels about me.

Having the ceremony and reception in one venue we’d also had to select our own music for the service. I love film soundtracks, so we made it a bit of a theme. I came down the aisle to ‘Glasgow Theme’ from Love Actually; during the signing of the register we played ‘Maestro’ from The Holiday and ‘Love Theme’ from Romeo and Juliet; and after the service as we exited to the garden, we played ‘Business’ and ‘Ball’ from Plunkett and Macleane. 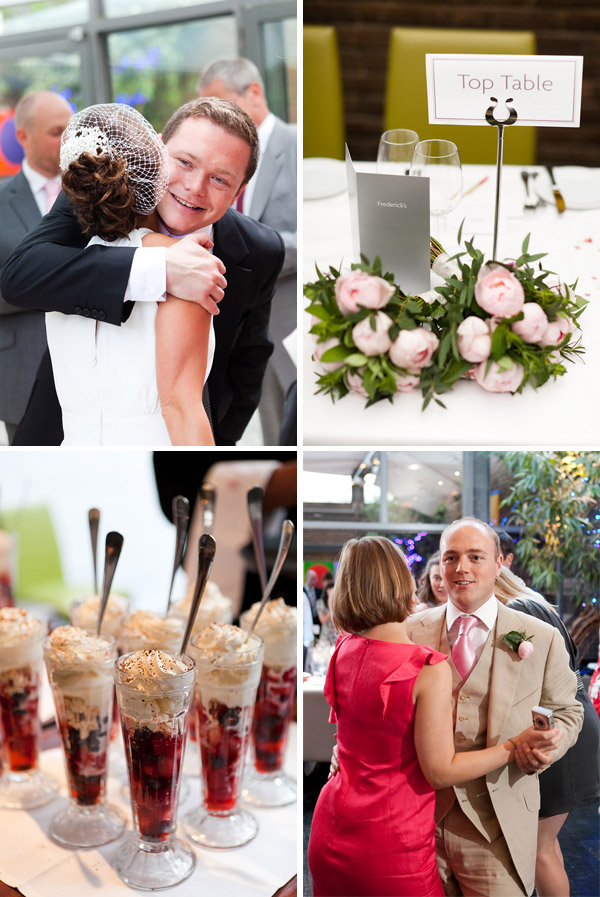 For Our favours we had Chinese fortune sticks and wedding quiz cards from Cox & Cox.

The beauty of holding your wedding at Frederick’s is that Renata and her team take care of as little or as much as you like – the restaurant’s flower displays were ordered to match our theme, she printed and displayed our table plan and table names, and printed the menus and name cards. There are two indoor trees – very Kate and Wills – and we asked for fairy lights to be put in them. The garden was a great space for champagne after the service and photos – it’s a central location but you can’t hear the business of Upper Street outside. The service staff were fantastic, as were the canapés and meal – the benefit of holding your wedding in a top restaurant!

The evening at Frederick’s wound up at 11pm. As it was a Sunday we thought that many of our friends would need to get home to bed. But for those who wanted to carry on chatting and celebrating, we booked an area at my favourite cocktail bar around the corner, 69 Colebrook Row. It was fun walking down the cobbled street in my wedding dress and one final night-cap in an intimate setting was a great way to end a fantastic day!

There is such a lovely vibe to this wedding… I had to resist simply filling every template with images of people just smiling and hugging! Looking back on it maybe I didn’t resist that much… but hey – we like to show the love on RMW…

Adam likes Pina Coladas and getting caught in the rain.
Tags:Floral Decor

24 thoughts on “The Angel Of Islington.”