Sometimes a submission drops into my inbox that is so awe inspiring that by the time I have reached the end I realise I have been holding my breath the whole way through.

The wedding of Allison and Nathan captured by Hannah from Kinver-Miles Photography is one of those submissions folks. And Allison might be one of the most amazing women I have ever come across.

In 2010 Allison was awarded a Pride of Britain award as she made medical history by being the first person in the UK to have all of her major organs transplanted due to a lifetime battle with cystic fibrosis. Though spending most of her life in and out of hospital on an operating table Allison has honoured a teenage vow to one day pay back the medical world for giving her the gift of life – Allison is now a fully qualified doctor.

Having had her liver, lungs, heart and kidney’s replaced Allison does not in anyway consider herself unlucky, quite the opposite in fact – Allison considers herself very lucky indeed as the number of organs available for transplant is so low.

“If I’ve learned anything, it is don’t fear death, fear the unlived life. But I’ve had more than a second chance thanks to two people who sadly lost their lives, and I’m not throwing it away.”

You can read more about Allison’s story on The Pride Of Britain website and I strongly suggest you do, it is inspirational beyond words.

Allison and Nathan’s Big Day is spectacularly beautiful in every sense of the word and Team RMW would very much welcome your comments of appreciation for Allison, her bravery, her selflessness and the fact she is sharing it all right here with you, our gorgeous community.

We are truly honoured. 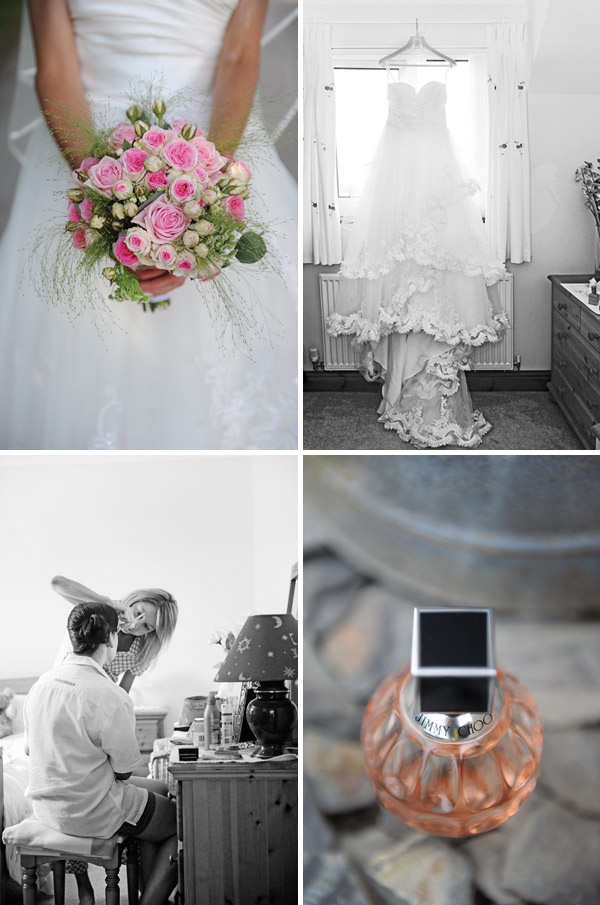 A Twist Of Pretty

My dress was a Jasmine Couture dress which was bought from a wedding boutique called Magic Moments in Abergavenny, Monmouthshire. I took a couple of days off work and Mum came to stay so we could start looking at dresses.

Mum and I started off in Cardiff where I did like a few dresses but knew they weren’t the one. I was looking for something different, something with a twist and originally thought I liked a style completely different to the one I picked. I had been recommended Magic moments by colleagues in work and so mum and I made an appointment and went for a look. I was amazed at the choice they had and the owner and staff were so friendly and helpful. What I particularly liked was the dressing rooms, they were so spacious and mum could sit on the sofa whilst I tried the dresses on in the private area within the room itself. Unlike the other shops I had been into where you had to walk out to the main shop area to have a look and so others could see you. This was completely private and I didn’t feel pressured or rushed. I had picked out a few dresses to try on and had spotted a couple that I really liked but thought wouldn’t suit me. The lady in the shop encouraged me to try them on as they looked different on. When I came to try my dress on I fell in love with it straight away. I just felt so special in it and didn’t want to take it off. Mum said I was just beaming from ear to ear and looked delighted. Mum loved it too. 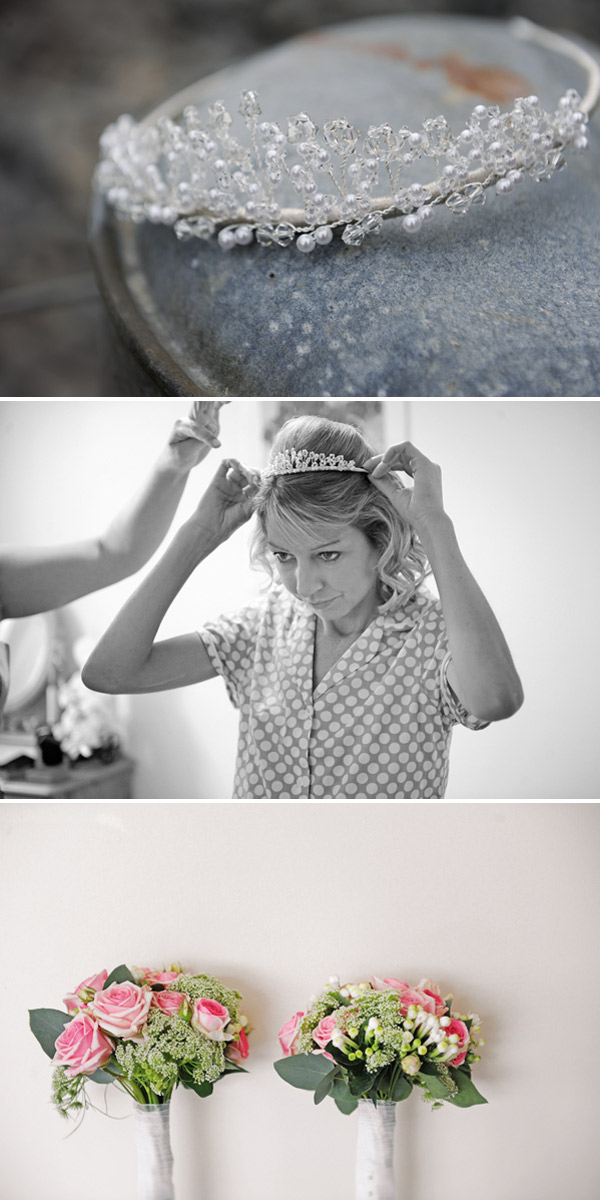 I had a veil and a tiara. I had told mum that I didn’t want a veil as I thought it would look to fussy but I fell in love with it when I tried it on. It was two tiered, waist length veil with piped edging and encrusted stones. My tiara had clear and white stones. Both my tiara and veil were from magic moments too. My earrings and bracelet were from Swarvoski crystal.

My shoes were Rainbow wedding shoes, in ivory white with a two and half inch heel. I wanted to last the day in the them!!

I wanted to look as natural as possible and still look like me on my wedding day so opted for loose curls and the top of my hair pinned back underneath my tiara. A great hairdresser called Kelly James who lives down the road from my parents did my hair. I had a hair trial about a month before and experimented with a few styles and decided to keep it not too formal looking. My chief bridesmaid Nina and I had decided that we would do our own make-up and went for a makeup trail in Mac in Cardiff for tips and advice. We ended up buying some lovely makeup and so I did my own make up on the day, and I did the bridesmaids makeup! 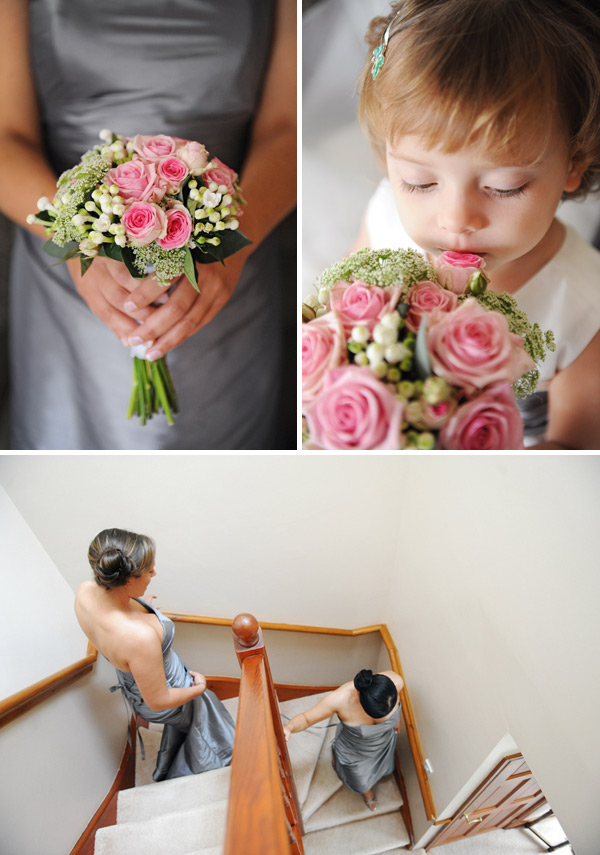 I had seen a silver/ grey colour for the bridesmaid dresses when buying my own dress that I loved. I really wanted to stay away from any garish and bright colours which aren’t really me. We bought the two bridesmaid dresses in a bridal shop called Perfection in Cardiff. Nina, my chief bridesmaid and I went looking and she tried heaps of dresses on. We really did have lots of fun. I picked a gorgeous ivory white flower girl dress with a large silver grey waistband and bow on the back in the same material as the bridesmaid dresses.

Once I had decided on the colour of the bridesmaids I wanted to stick to a monochromic white/grey/black colour scheme and just have colour in the flowers. We decided to hire the grooms party suits from Dyfed Menswear in Cardiff. Nathan and I decided we didn’t want the fancy waistcoats that everyone seems to have but wanted the old style three piece suit with waistcoat the same material and colour as the jacket and trousers. I picked a gunmetal grey sil tie for Nathan and the bestman, ushers, father of the bride and two young ushers had taffeta silver grey ties to match the bridesmaid. 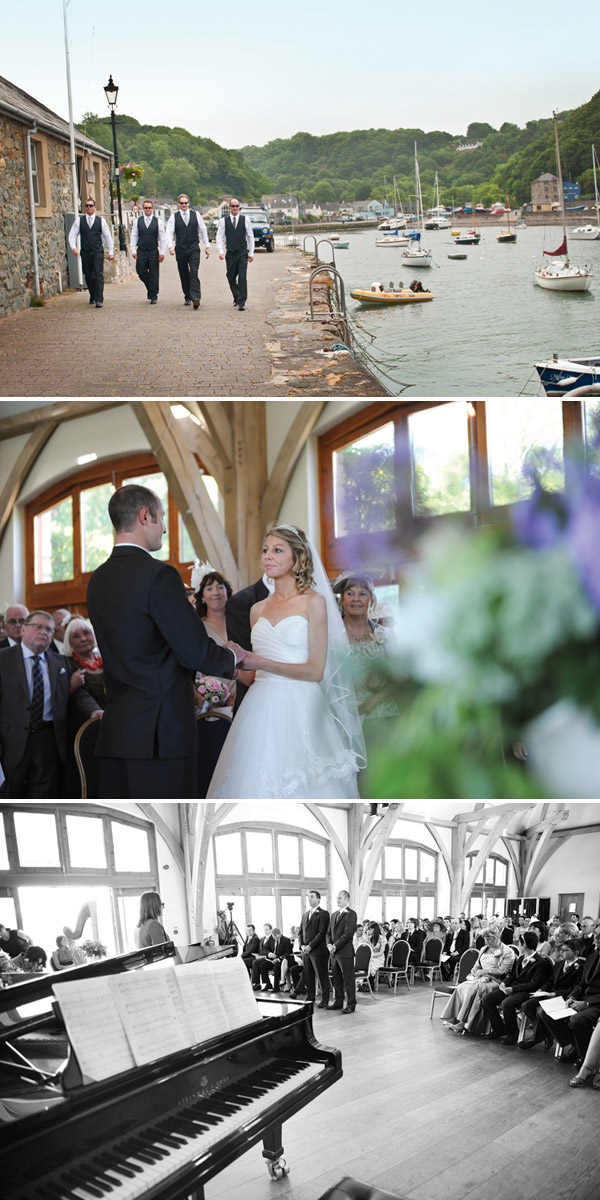 Exactly What I Wanted

Nathan wore the same three piece suit as the groomsmen but with a gunmetal tie. As he is a New Zealander I had asked his parents to bring over some cufflinks too. Of course when I saw him, he looked stunning.

I had decided that I wanted the flowers to look very natural. I was very close to my late grandmother who had left some beautiful antique jugs for me after she passed away.

I decided to use them on the tables with fresh flowers in them so it looked as if they had just been cut from the garden and put into the jugs. I discussed this idea with the florist Bridgette from Amaryllis Flowers in Fishguard, Pembrokeshire who loved the idea. I wanted to keep the colour scheme soft and not overpowering and opted for shades of pink in my bouquet and pinks, lilacs, white and lots of foliage inc grasses and euculuptus leaves in the jugs and pedastals. Bridgette really did bring my idea to life and I was over the moon with what she came up with. I will never forget the impact of the flowers on the day, they looked so beautiful and done exactly how I wanted. 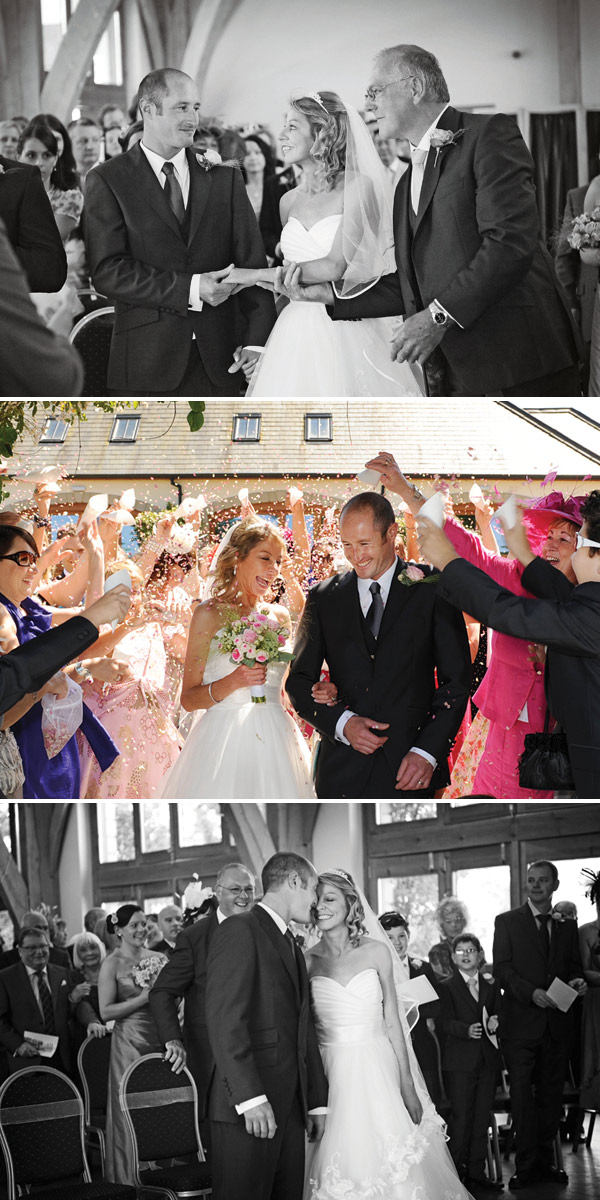 As the guests arrived, my friend Carys Evans played the harp. During the service, friends of Nathan and I John and Andrew Evans, Colin Hancok and Ian Hunter who sing in a male voice choir sang two songs, one Maori song from New Zealand and a welsh song, accompanied on the piano by my friend Carys Evans. Then during the signing of the register our friend Anna Lewis sang I the Arms of the Angel, also accompanied by Carys Evans.

For the evening entertainment, we decided to hire the band that played in my 30th birthday party called One size fits All, a group of 5 boys from Cwmbran, south Wales who sing rock covers. They were amazing at my birthday and really got the crowd up and dancing so we decided to ask them to play at the wedding which they did and they were even better than the first time. 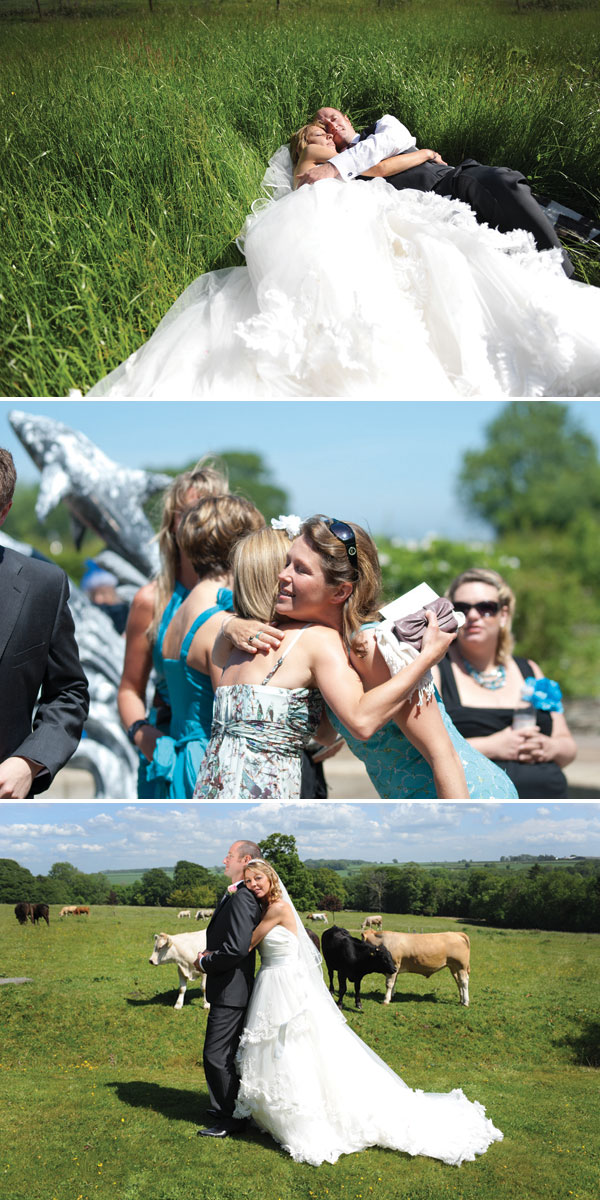 My mum’s friend Janet Williams made the cake which was delicious. Nathan and I had decided that we wanted a white chocolate cake with plain sponge on the top and bottom tear and a chocolate sponge in the middle. It had a layer of buttercream in the middle and was surrounded by a lemon marmalade to make the chocolate stick.

I picked Hannah from Kinver-Miles Photography as I love her style. She is from my home town Fishguard, we went to the same school and she’s married to my friend. Although I didn’t realy know her in school I knew her brother. I knew she was a great photographer but didn’t know she was a wedding photographer until I saw some photos that she had taken of a friend’s wedding. I like the way she captures the moment naturally and does not take too many ‘posed’ photos. I was delighted with the photos we had, she really has captured the feel of the day. 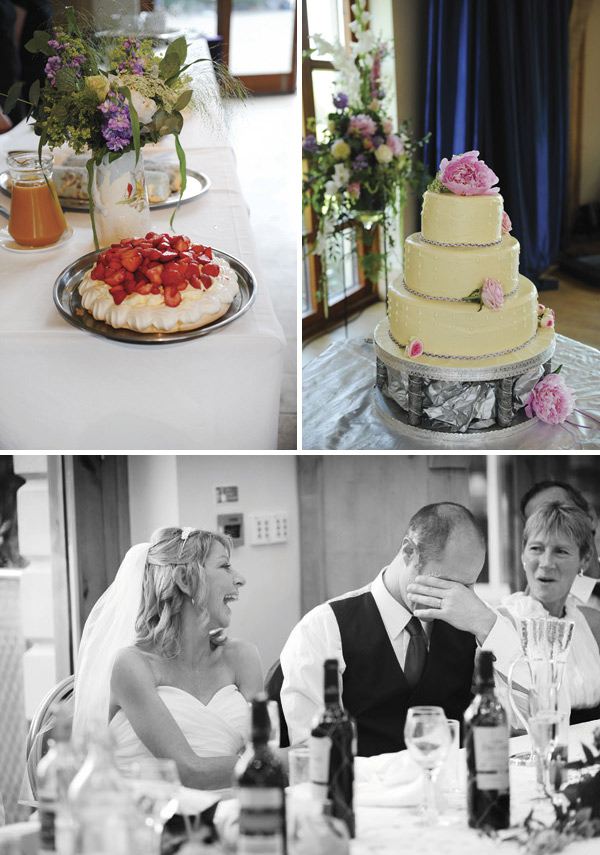 Our first dance was a song called Anchor Me by a New Zealand band called the Mutton Birds. The song was significant to us as it was playing when we got engaged in New Zealand. Nathan had proposed on a beach under the stars in Samoa, but we picked the ring together in New Zealand. Nathan decided to put it on my finger on top of the Kaimai mountain range to this song. 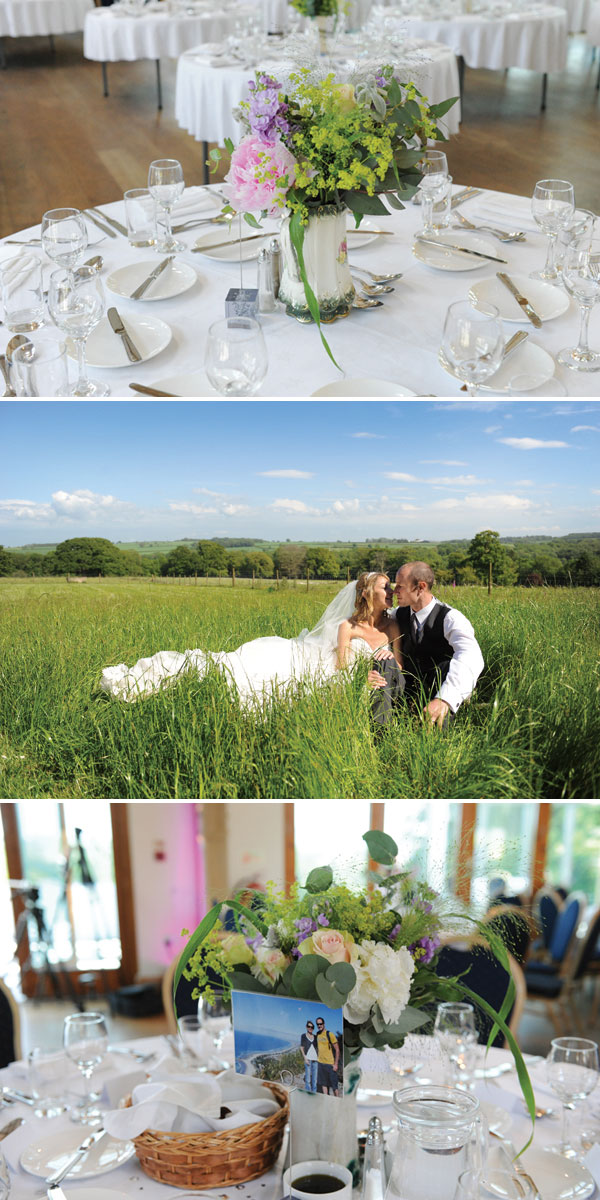 Doing It Their Way

We decided against favours and we don’t really like to many frills and spills….. We had some silver hearts strewn on the table and that was about it. There were also fairy lights around the beams which the venue have up permanently.

Nathan and I often have alternative ideas to everyone else and we stuck by our decisions all the way and I’m so happy we did. It’s very difficult to please everyone and it’s important to remember that it’s your day. What made it so special for me was that we made it so personal to us by getting friends and family involved in the service. It was also very chilled out and a true celebration of our love for each other. 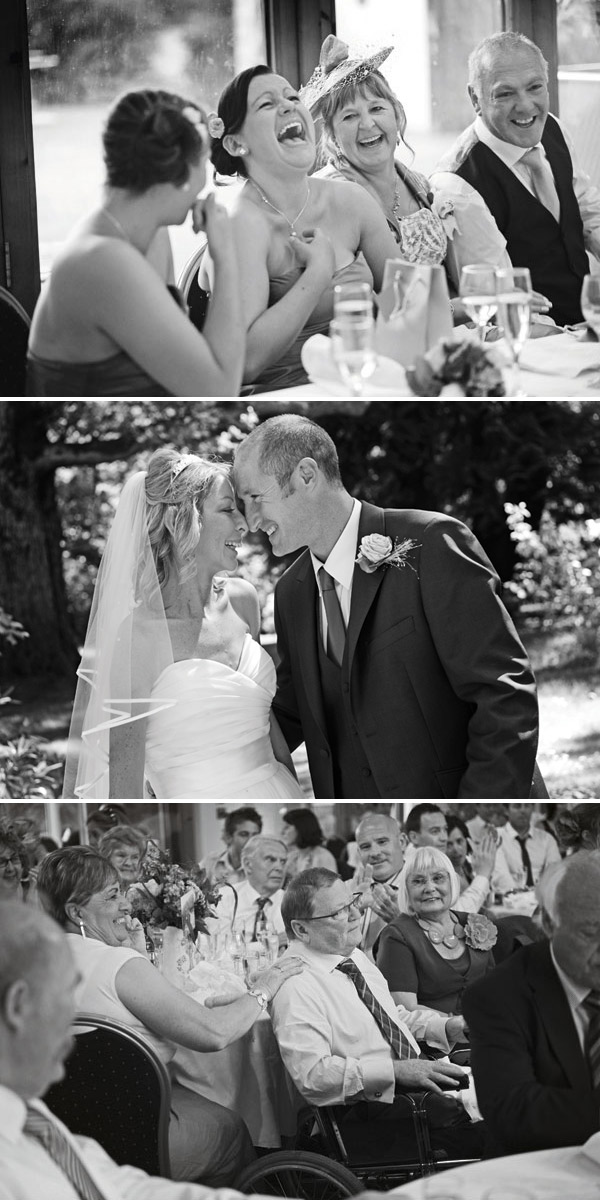 Entertainment – One size fits All

You see the man in the last image? When Allison had to have her healthy heart transplanted due to a complication with her lung replacement she gave it to this gentleman – heart attack victim David Hamilton.

Yup. Allison Angell, I couldn’t think of anything more fitting for someone who has given life, is saving lives and has never given up. May you and Nathan have a long and happy marriage.

Big Allison Is My Hero Love

39 thoughts on “The Pride Of Britain.”