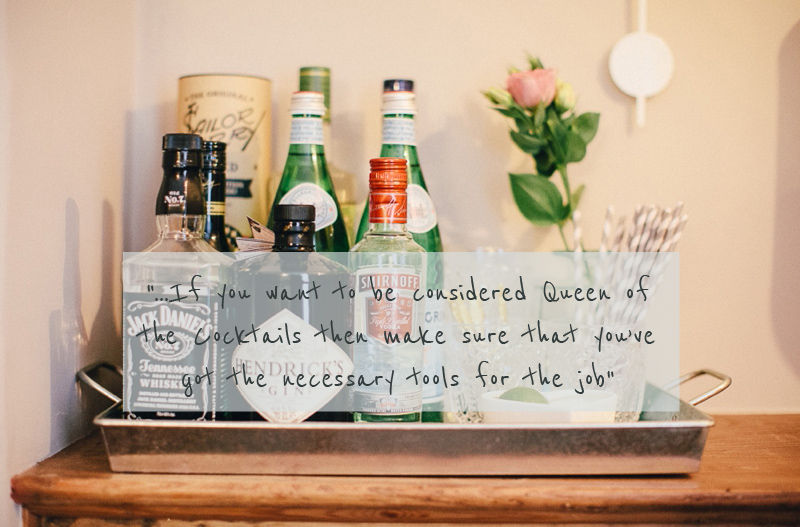 As summer slowly sidles off-stage in the wake of Autumn’s first flush of colour, cool drinks on the terrace and in the parks and pub gardens start to become a distant memory. But the inevitable drawing-in of September nights doesn’t mean the party has to stop there.

Instead, we at RMW towers say, bring the refreshments inside with you as you reside by the fire and revel in the ‘cocktail hour’. Be it due to the popularity of Mad Men or the influence of our cousins across the pond, we’ve seen the resurgence of cocktails and bar carts of late. And from your enthusiastic response to the lovely Lauren C’s bar tray it seems that you can’t get enough of them either.

It was William Morris that said ‘have nothing in your house that you do not know to be useful, or believe to be beautiful‘ and the bar cart is no exception. Whilst your bar cart serves a functional purpose there’s no reason why it can’t be aesthetically pleasing or sentimental too.

Below are my top tips in styling the ultimate bar cart*

If the budget allows it then it’s worth investing in an actual cart – preferably one that moves on wheels since this makes it so much easier to ‘take the party with you’ as and when required. I’d recommend spending as much as you can possibly afford to boot – remember folks you really do get what you pay for.

Choose a cart that has a high storage capacity (there’s nothing worse than a crammed bar cart where glassware and bottles jostle with one another for space) and a rail to hold everything in place. Better still are removable trays to allow easy transportation of drinks from cart to guest and inbuilt racks to enable wine to be stored on its side.

If space is at a premium or there’s just no way that you’re going to be able to afford the cart and that pair of shoes that you’ve had your eye on for the last two months, then consider creating a bar ‘tray’ using a vintage tray or a reclaimed side table instead. I particularly love this mother of pearl version from Zara below.

If you want to be considered Queen of the Cocktails then make sure that you’ve got the necessary tools for the job; most cocktails utilise either a shaker, an opener, a stirrer and/or strainer at some point in their creation so it’s definitely worth adding these items to your cart’s inventory. On a side note, it’s always a good idea to invest in an savvy ice bucket and tongs too.

One of the key components of a successful bar cart is gorgeous glassware. Be it a set of priceless cut crystal wine glasses that have been handed down through your family, some kitsch babycham saucers (LOVE those!) or a collection of mismatched colourful tumblers, it’s always worth paying due care and attention to the vessels in which you serve your drinks. Alternatively pretty up plain glasses by entwining some blooms around then stem for a cheap quick fix alternative.

Speaking of glassware, try picking bottles that match the beauty of your drinking vessels when kitting out your cart – Hendricks Gin and Chambord are both examples of great design as well as taste. Alternatively if you’re a fan of a particular type of spirit but you’re not so keen on the design of its container then it’s worth dispensing it into a different vessel such as a cut glass dispenser or these etched ‘white’ and ‘red’ beauties shown here.

Whilst we’ve talked about the tools of the trade and the glassware and the booze, you don’t actually have to cram every single piece of ‘barware’ you’ve collected on the way onto the aforementioned cart. Talk about over-egging the… ummmm… eggnog.

Instead mix it up. Keep things versatile by choosing a variety of different liquor bottles, decanters and glassware as well as colours and textures too. Don’t be afraid to play with the organisation and arrangement of the cart either. Ultimately in this case, it’s all about balance – not so little that your bar cart looks as if someone’s already been at the drinks cabinet the night before nor so full that everything goes flying when you try to mix a cocktail.

One of the easiest ways of changing it up is to opt for coasters, napkins and stirrers in a particular colour scheme or theme. Etsy abounds with plenty of examples that won’t make a major dent in your pocket but if you’re feeling crafty then it really is very simple to make your own stirrers and napkins by commissioning a bespoke stamp with your initials on or even a faux crest.

Think outside of the box when it comes to styling your cart too; display a voluminous arrangement of sweet smelling blooms in a statement vase next to your glassware or light up your treasures with an oversized lamp instead. I particularly love to have a pot of mint (in a mercuried silver vase of course!) on my bar tray so that it’s to hand when I’m making a mojito or two.

Above all, your bar cart – like all of your interiors – should be an extension of you, of your personality, your style and your life journey so far. Wherever possible try integrating items that either reflect your personal style and tastes – as Lauren did with her glitzy and fun pineapple forks. Such ‘items’ can include anything from favourite bottles of wine, a treasured set of glasses, monogrammed shakers or even vintage metal cocktail sticks.

What will you choose?

So have we whet your tastebuds then?

Will you be integrating a cocktail hour into your big day?

And how many of you are already the lucky owners of glamorous drinks station already? And what component can’t you live without?

And come and tell us what your favourite tipple is….I’m partial to gin and elderflower flavoured tonic water or two.

*RMW takes no responsibility for any violent cases of the green-eyed monster caused as a result of following these steps.

Lolly is a self-professed frustrated florist and styling maven with an endless passion for all things pretty.
Tags:Decor |BHLDN |Whites

11 thoughts on “The Ultimate Cocktail Bar.”