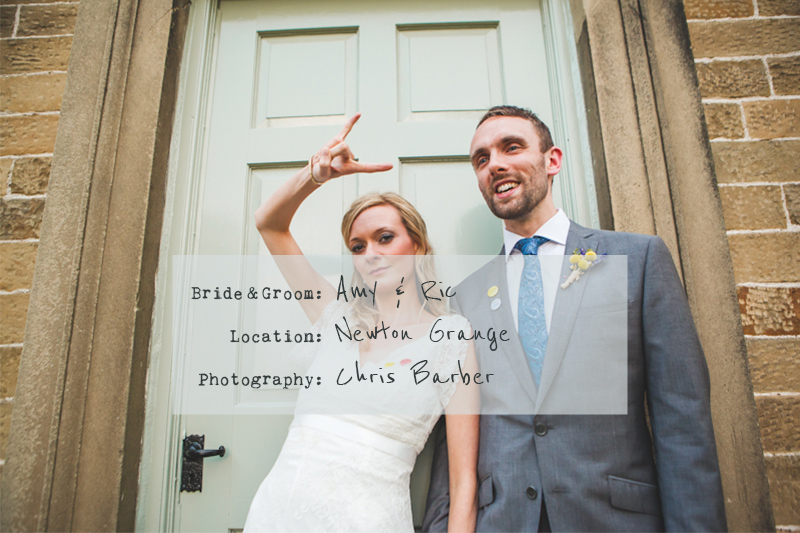 Amy and Ric are Rock My Wedding readers and they told me that the RMW pages were a massive source of inspiration during their planning process. So now, in the style of that Kevin Spacey film from a few years back, Amy is here to Pay It Forward.

Amy The Bride: Our ceremony was at the Priory Church of St. Mary and St. Cuthbert, Bolton Abbey, in the southern Yorkshire Dales – a really special place for us. The reception was down the road at Newton Grange in Gargrave; a working farm with holiday cottages, which allowed friends and family to stay on site. Catherine and Rachael from Newton Grange were fantastic and basically allowed us free-reign for the whole weekend to create exactly the atmosphere we wanted.

The dress was Eleonor by Cymbeline, bought from Brides of York. Being a google-search-addict I had first seen it on-line and had a pretty good idea there and then that it was ‘the one’. I knew I wanted something relatively understated and bling-free, and have a real weakness for anything involving lace and a cap sleeve! I think it suited the laid-back feel of the day perfectly, and even survived a small gravy-related incident relatively well! 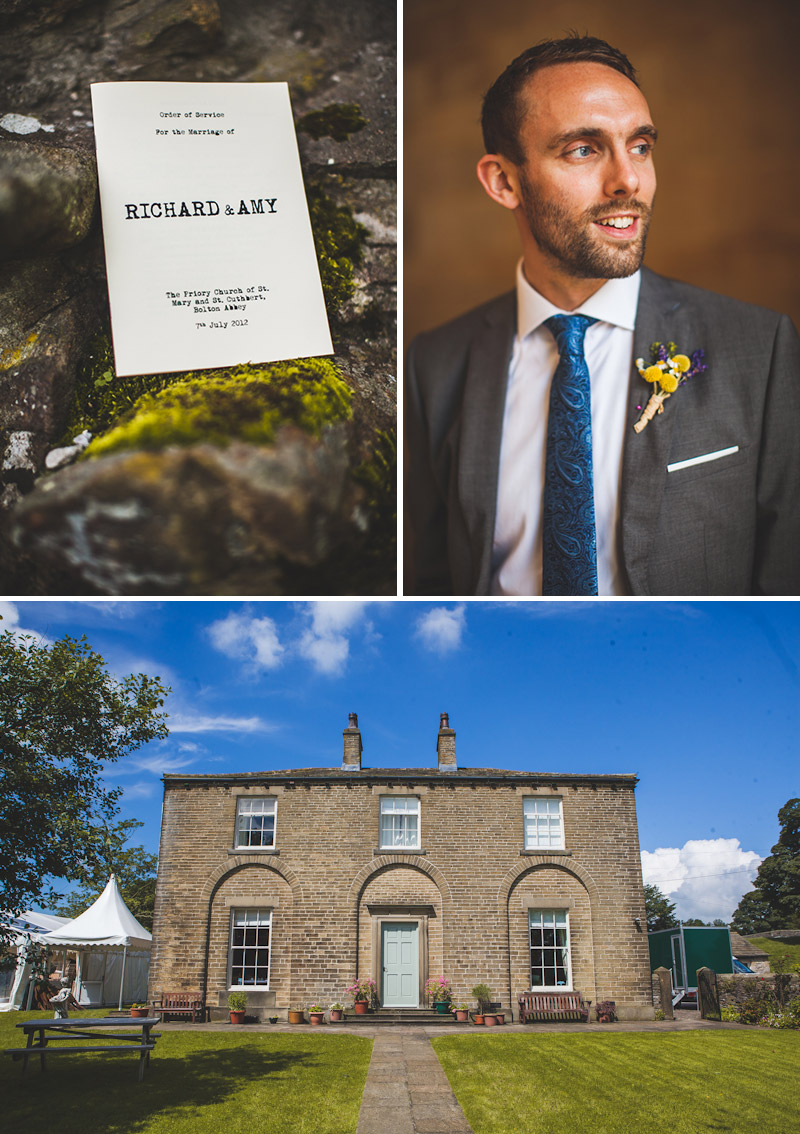 A Word From The Wise

With the words of Coco Chanel “Always remove one accessory before leaving the house!” (courtesy of my very good friend and bridesmaid, Louise) ringing in my ears, I did not want to over-accessorize, instead letting the chantilly lace of my dress speak for itself. I just went for some fresh chamomile in my hair, a vintage watch belonging to my Grandama and simple pearl drop earrings and was good to go.

After dreaming of a pair of Louboutins / Choos etc my whole life, I am somewhat loathe to admit I veered off course spectacularly with a bargain pair of comfy Carvela nude peep-toes from TK Maxx! My reasoning being

Tanya from West Row Hair in Ilkley worked her magic on mine and my beautiful bridesmaids’ hair. Again, I didn’t want anything too finished (or flammable!). I did my own make-up, but stock piled a tool-kit comprising Laura Mercier, NARS and By Terry beautification products, which I now get to keep – bonus!

Throughout the planning stages, I found I developed an unhealthy obsession with ‘yellow pom-pom flowers’ aka Craspedia, and knew I wanted them to feature heavily. I cannot recommend the team at Leafy Couture flowers, Otley, highly enough. After meeting them, and me banging on for an hour about the ‘yellow pom-poms’, they were able to realise my vision amazingly, coming up with some seriously beautiful bouquets and button-holes in a multitude of colours.

For the rest of the table decorations I turned to the ever-reliable e-Bay to form a collection of old kitsch tins and blue glass vessels in which to arrange matching flowers, also courtesy of the Leafy girls flowers. The day before the wedding my bridesmaids and I nervously set about some amateur floristry, but definitely achieved the unstructured look we were hoping for (aided by plenty of home-brewed Pear Cider!) 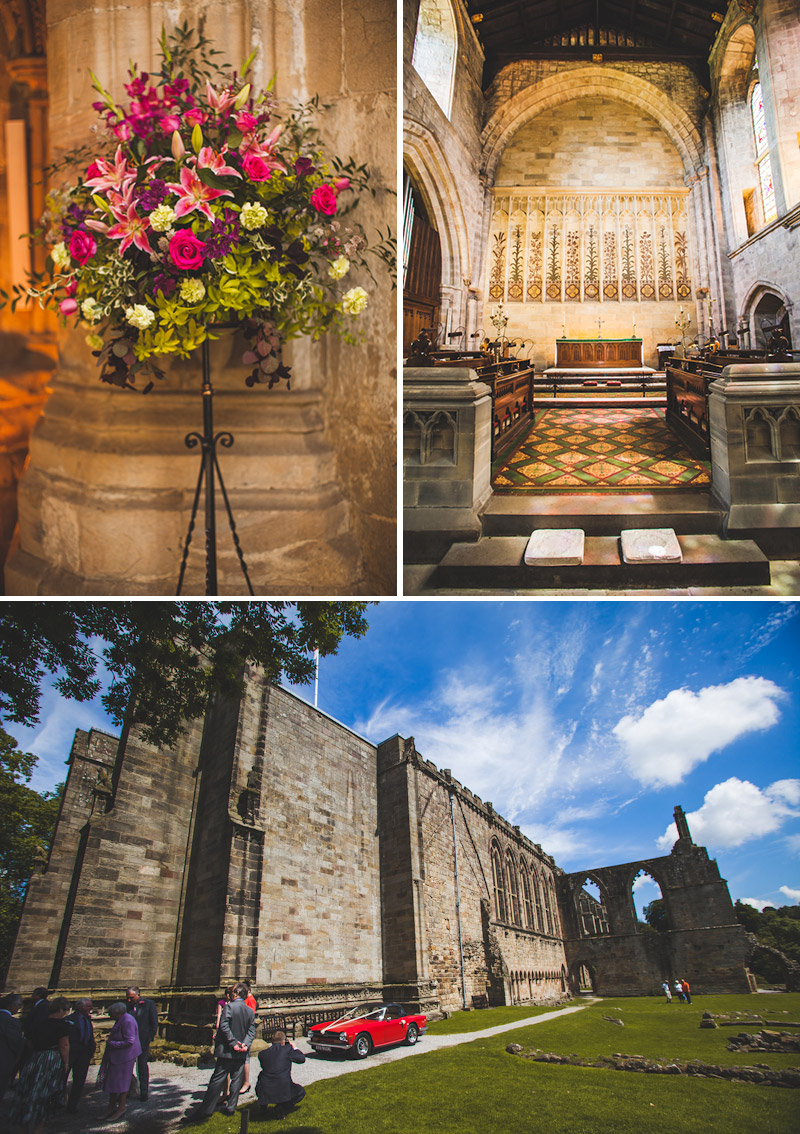 The bridesmaids dresses were an absolute steal – midnight blue maxi-dresses from Warehouse. Again, my love of the cap-sleeve came through, and the overall shape echoed that of my dress (a happy accident!) I think they looked totally stunning.

The men-folk wore their own suits, with matching midnight blue ties with pale blue paisley print to coordinate the dapper bunch.

I think the contrast of the bright bouqets and buttonholes worked really well against the blue base.

Ric scrubbed-up very well indeed (though I am horribly biased!) He wore a suit from Moss Bespoke – a sister company of Moss Bros started by former Savile Row tailors, creating tailor made suits at a fraction of the price. His rather gorgeous shoes he viewed as a massive splurge (considering he was previously the owner of a grand total of 3 pairs, 2 being trainers) from Grenson. 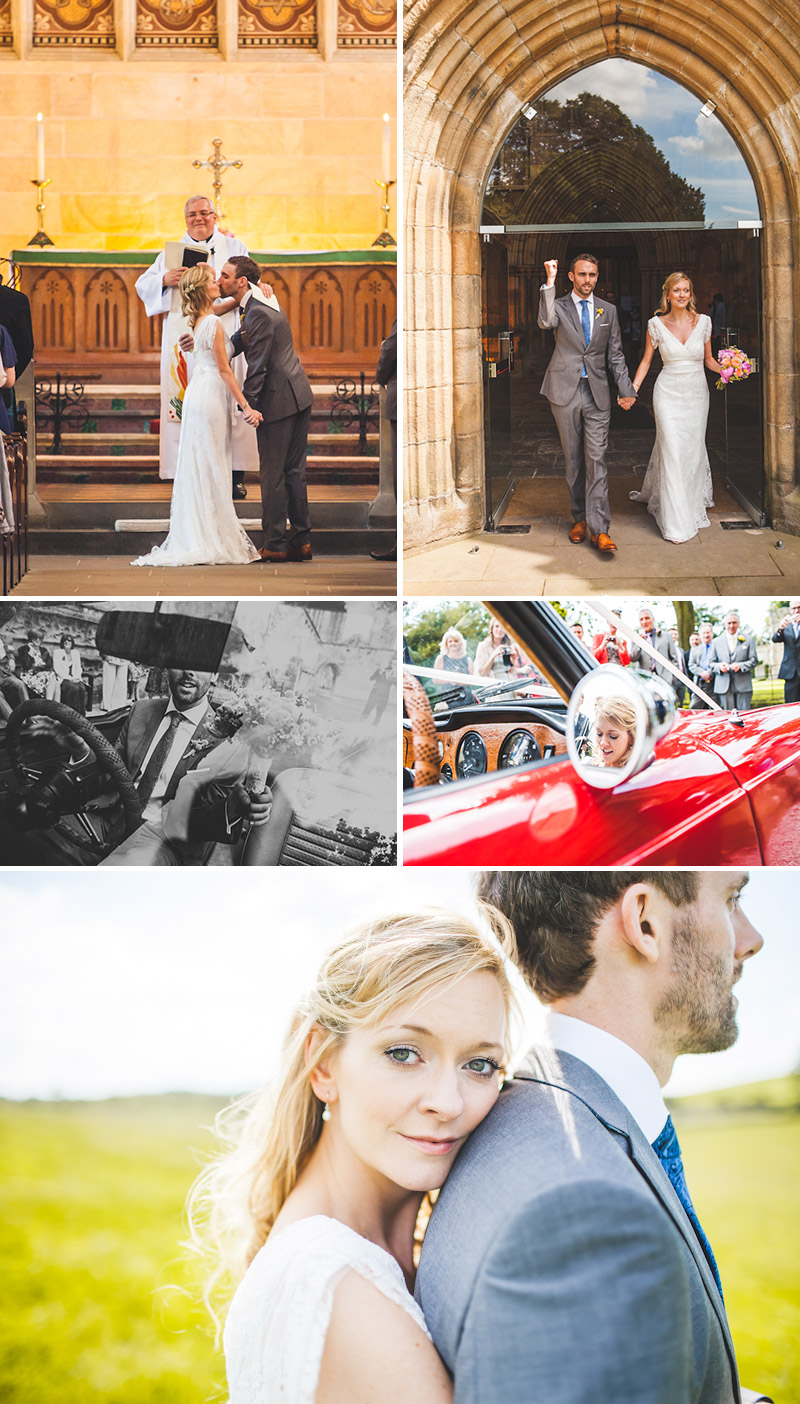 Fetch Me A Barber

The day was captured by the phenomenally talented Chris Barber, and his equally able side-kick for the day, Lee Allen. As soon as I happened upon his website, courtesy of RMW, I knew he was the one for us, and he did not disappoint! From our first meeting he put even the photo-phobic Ric at ease in front of the lens and we really enjoyed the time we spent with the pair on the wedding day itself. 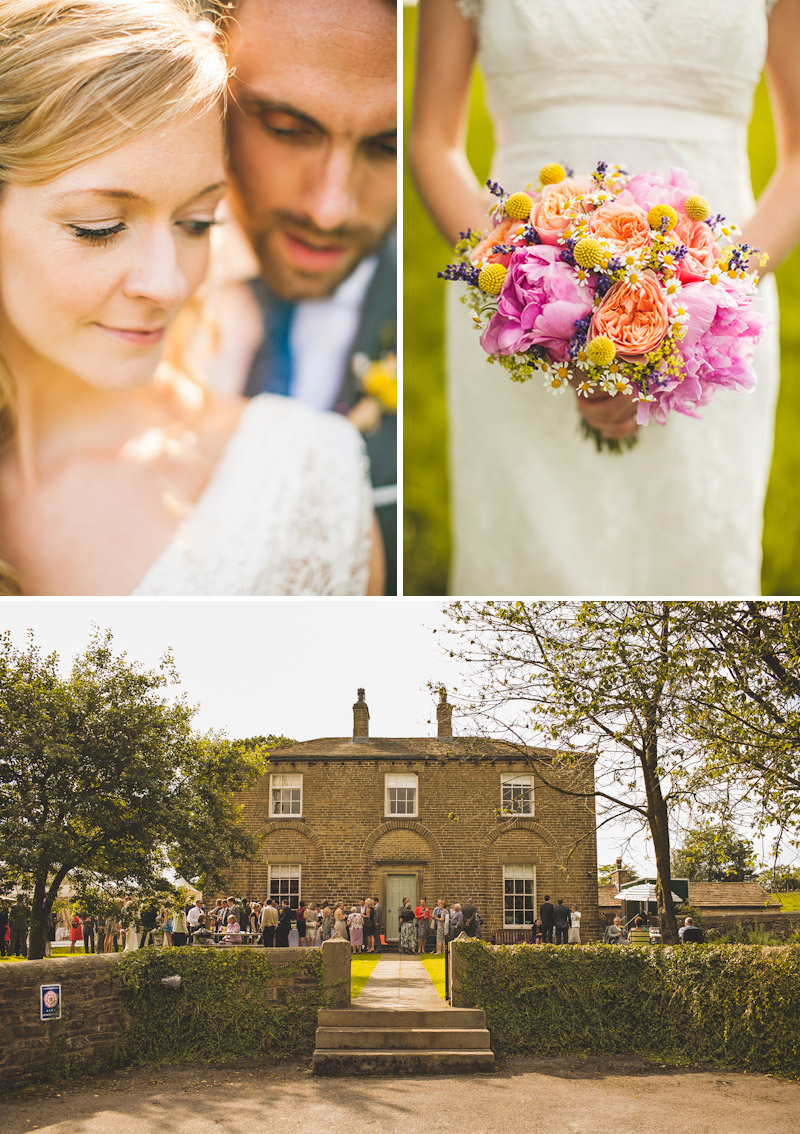 The cake was created courtesy of Ric’s Aunt, and really did exceed all my expectations. The decoration was lace-inspired and very understated. In addition we had a mandatory cheese cake, to serve as fuel for the evening-do-dancing.

Our first dance was to The Smiths ‘There is a light’. We wanted something that meant something to us, whilst avoiding being too cheesy. I think the lyrics are very poignant and fitting and Ric is a massive Smiths fan, so it was the perfect choice. 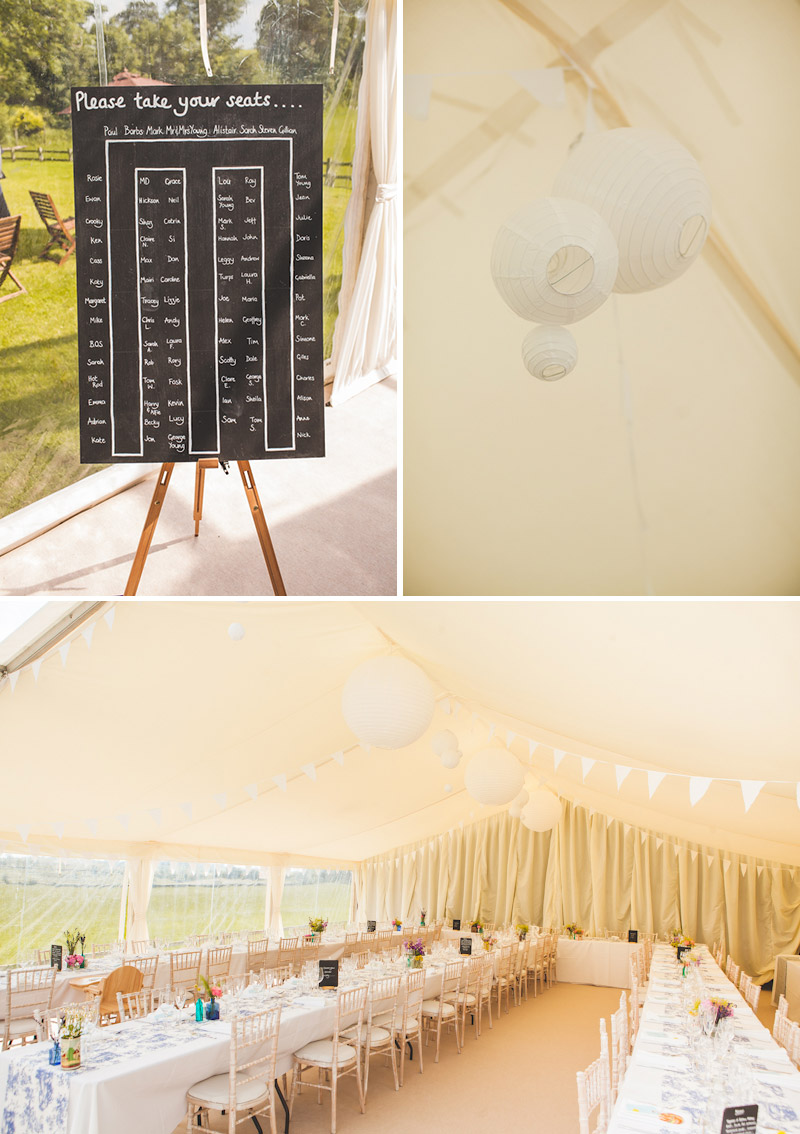 We bought customised badges from Awesome Merchandise based in Leeds, with our names and the wedding date on them. In the hope all our guests would don them for the night – they didn’t disappoint!

From the outset Ric and I knew we didn’t want to comply with a strict ‘package’ that many venues offer, and instead opted to do / plan as much as we could ourselves. The result was a day that really did reflect us; understated, relaxed and all about family and friends. I think the setting really stole the show; being surrounded by the stunning Yorkshire Dales was just perfect. 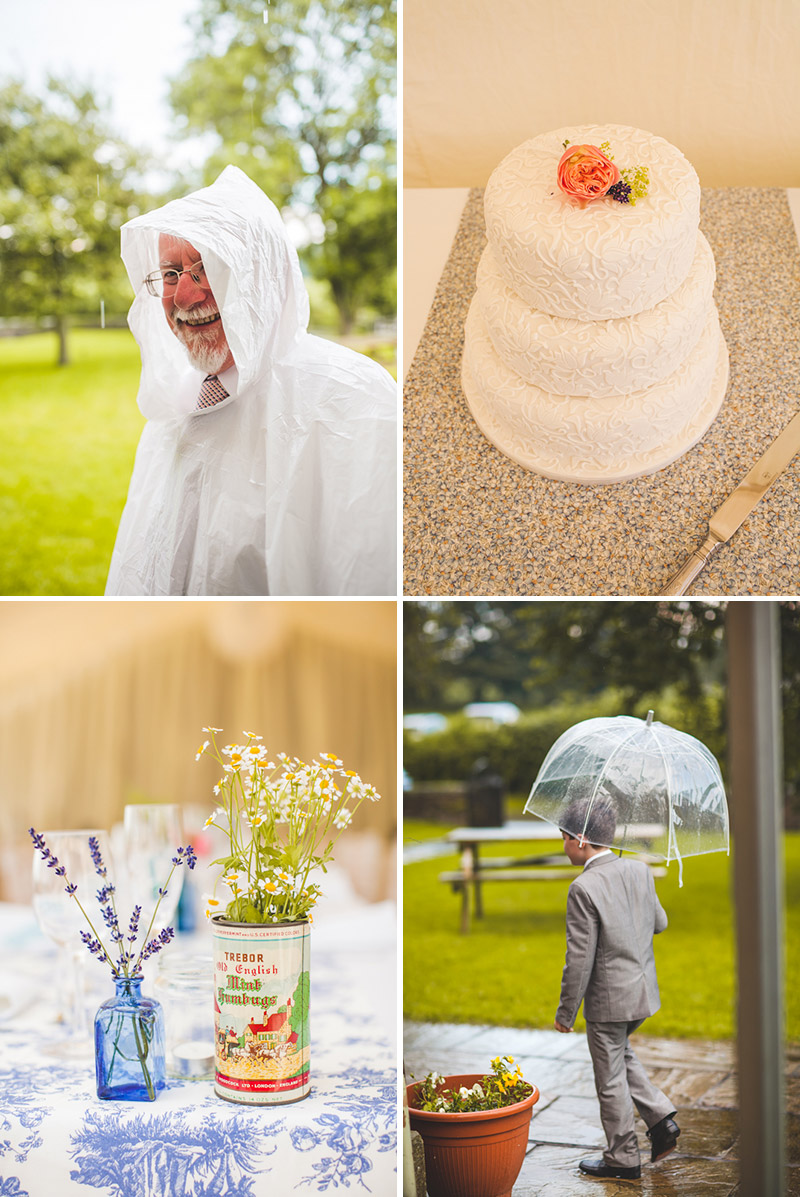 The only advice we would offer future brides and grooms is to stick to your guns and don’t be persuaded by anyone that you ‘need’ chair covers / white doves / a horsedrawn carriage (just examples!) if you don’t want them. Also, in the frantic few weeks leading up to the day itself, try and take some time out together to remember what it’s all about; that should make any niggling worries about table plans / colour schemes etc. pale into insignificance.

I am really loving those colour pop tins with the rustic florals. I am also hugely fond of the seating arrangements – I think long trestle style tables are a really good way to get all your guests mingling and they look fab too.

Adam likes Pina Coladas and getting caught in the rain.
Tags:Cymbeline |Warehouse