Right well I did end my last post reassuring you that there would be much more DIY from me, which there is, I also said that it would be easier to do… well I lied!!!! I DO NOT recommend the following…

I’ll start right from the beginning, having undertaken both a Fine Art degree and Masters at university’s where there have been letterpress facilities, I have done A LOT of letterpress. I love it, I mean I REALLY REALLY REALLY LOVE IT! BUT it’s very expensive if you haven’t got the beauty of a university with all the equipment in place. It’s also a process that is VERY time consuming.

However, with the rose tinted glasses of wedding bliss, Darren and I decided that we would buy a press and all the other equipment to boot and make our own letterpress Save-The-Date’s and invitations…

So we brought a press from EBAY for just under £100, which as I’d only ever used the huge presses at Uni I quite frankly didn’t have a clue how to use. So we then attended a printing wayzgoose (which is like a fair for letterpress) at an industrial heritage museum about an hour from where we lived call the Amberley Chalk Pit Museum. Here we met the lovely guys in the working Letterpress Print Shop who put us in touch with Peter, who has turned into our printing mentor/savior!

We made arrangements to meet Peter back at Amberley a month later, we took our printing press with us and he made it work! He showed us how to use it and gave us loads of cool stuff so we could get started. 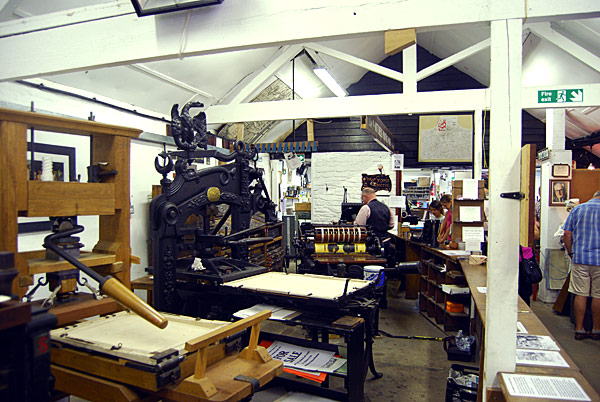 This is just one half of the print studio! If any of you have done any letterpress you’ll want a workshop with all this in as much as me! 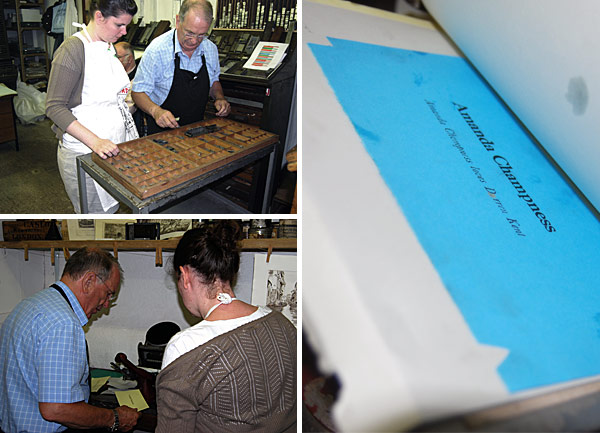 Peter and I picking out the letters and producing our first print.

So now we needed some more equipment and we still didn’t have any type, so we wouldn’t be doing many STD’s without them!

Now we could have got the type on EBAY but that starts getting expensive especially with postage costs. So we found out that a man in Essex was selling off all his letterpress type and equipment from his museum that was closing down. So yes we went to Essex for a day trip!

This is the AMAZING collection I had to choose from! It was hard! I wanted it all, but we had a budget to stick to! So we ended up with four full draws of type and an extra tray of goodies.

Then we went to Hove for another day trip (not quite as far!) to buy the ink. We also went around all the lovely charity shops, but I’ll show you that stuff at a later date!

So once we got it all home, it was time to start printing!

So we invaded our sitting room with all the equipment we had collected – At this point please bear in mind that there are the two of us, plus Doris the diva cat living in a two and a half bed house, which should be plenty of room right?. We have one room set up as a workshop for a number of mine and Darren’s creative hobbies/inventing, as well as a garage containing a vintage car and the other spare room set up for guests and has now been turnt into Wedding HQ – so space is kind of at a premium. We’re renting and we want babies straight after the wedding, planning ahead we moved just after getting engaged as moving again shortly after marriage was not a pleasant thought. 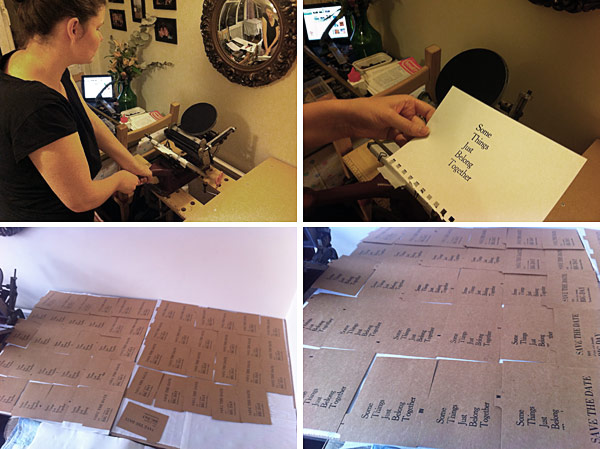 It took about two weeks in our print shop/front room and after much trial and error and lots of muscle power from Darren on the press, and lots of arranging and instruction from me, they were finished!

Then we had to sew them, after a series of been-and-gone deadlines, we set a new deadline, which was Darren’s Uncles birthday party, so we could hand a bunch of them out. So on the morning (OK afternoon) of the deadline I sat at my s**t Lidl’s £40 sewing machine and guess what it didn’t ruddy work!!!!

So of to my Mother-in-law-to-be’s house (She’s a ruddy gem I tell you, what more could a crafty lass like me want more than a Mother-in-law-to-be who’s a seamstress that can literally fix anything (ok maybe not anything) but between the three of them (Darren, Ma and Pa) they could fix anything! I thought I was already ok, with my cake making Mum, roofer/builder of everything and anything Stepdad and Carpenter Dad; it’s literally the handiest family ever!

Anyways she fixed it, of course, just in the nick of time…

You may notice the one’s above have white thread, after sewing enough for Darren’s family party, I then changed my mind and sewed the rest black!

So below are the final ones!

There are actually seven different versions of the inside, depending on who the invites were for:

After printing them all, I realised we could have got it in two varieties

Hindsight what a wonderful thing! But there you go…

Just thinking this has turned out to be a crazy long post and I haven’t even included how I designed it, choosing paper, choosing envelopes etc… etc… but I don’t want to bore you to death! Now we’ve just got to give them all out, and these are only the save the dates!

Just wait till you see what I have planned for the invites!!!

p.s. I’d love to hear about any oversized, time-consuming DIY projects you’ve taken on, without quite realising what you’ve taken on until it’s too late…

Adam likes Pina Coladas and getting caught in the rain.
Tags:Stationery |DIY

18 thoughts on “What Amanda Did… Some Hardcore Letterpress DIY.”