Summer has finally arrived! Now I just want drink Pimm’s in the sun. But with less than 50 days to go, that is not what I should be doing…

It’s ok, we do have things (almost) under control. Since our mini-break Tom and I have steadily ticked off our to-do’s (ahh, the upside to never-ending rain!). Of course we’re still behind schedule but, hey, nobody’s perfect. I’m just going to reassure myself by telling you all the wonderful things we’ve done lately…

It occurred to me yesterday that I’ve discussed the girls’ outfits at length (self-involved much?) but have yet to tell you about the boys…

First things first, the groom. Tom has strong sartorial preferences so renting was never an option. After all, I get to have The Dress so why should the groom not treat himself to a special suit? At least he can re-wear it afterwards! So Tom decided he wanted a nice made-to-measure lounge suit he could easily re-wear again to work or other special occasions.

So, off we went to Marc Wallace, a very friendly tailor on the New King’s Road (who happens to stock beer in the shop – genius). Well ladies, let me tell you, choosing a made-to-measure suit is complicated. The process is thorough, but complicated. Tom wanted my advice (is it bad luck for the bride to see the groom’s outfit before the wedding?) but I was absolutely gobsmacked by the number of available options! From the type of lapel to the style of buttons, and even the colour of the underlining (that’s the bit under the collar); it can all be customised!

Of course, Tom had done his research and was prepared for this, though it still took us about two hours to choose everything. Without giving too much away, here a couple of pictures of Marc Wallace suits: 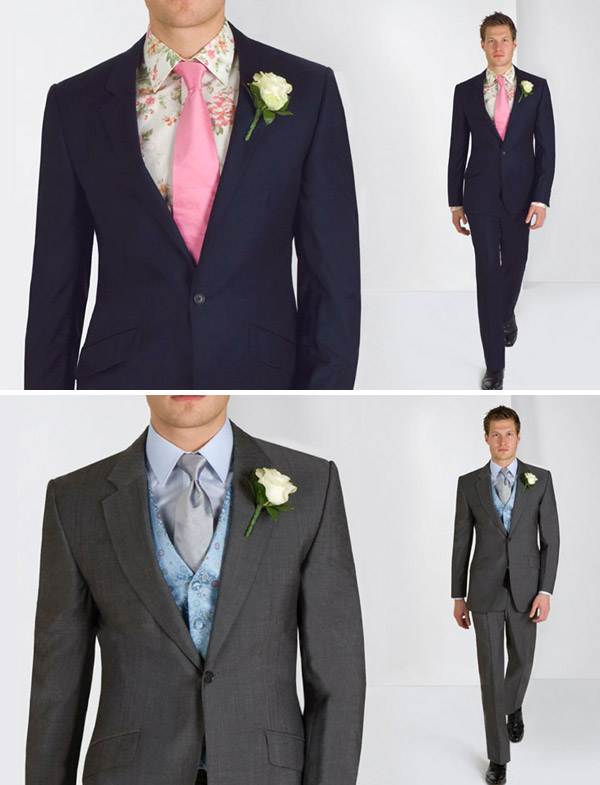 For the ushers and the fathers, I wanted them all matching. There’s a small Bridezilla in all of us, what can I say… Tom’s suit will be blue (lighter than navy blue) and we wanted him to stand out a little so we opted for light grey suits.

After looking at rental options, Tom managed to negotiate a 75% discount at T M Lewin – bargain! 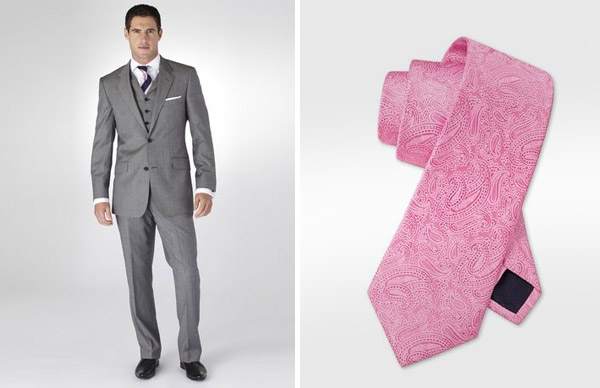 All the men in the bridal party will also wear a pink tie to match the bridesmaids’ outfits:

I’m very much looking forward to seeing the boys on the day, they’re going to look rather dashing…

I couldn’t write this post without a (somewhat) brief update on my own outfit… I swear I have never spent so much time and effort for a single outfit. In fact, the whole process has been an eye-opener for me, though I’m not going to lie: I’ve enjoyed it!

The good news is that the dress is made and it fits! And, you know what? It looks wicked! I was a little nervous beforehand – what if I remember it differently? What if I no longer like it? And… What if it doesn’t fit? My worries melted as soon as I put it on as it just felt so good to be finally trying on a dress that fits properly. One last fitting and it’ll be coming home with me!

I have also ordered a veil, which matches the dress. Veils were a bit of an afterthought for me, but they’re just soooo pretty and delicate and soft, they’re irresistible. As my mum wisely asked (rhetorically), when else will you get to prance around in a veil? It’s now or never! Also, in France, it is traditional to cut up the veil and send a piece to each guest as a thank you token. Let me reassure you though, my mum has already suggested that we buy some cheap pretend-tulle to send instead of hacking up the real masterpiece. Wise decision methinks. By the way, for all you veil wearers out there, will you be covering your face on the day?

Most of my jewellery also comes from Sassi’s shop. I swear I don’t receive any commission from her; it’s just a dangerously delicious shop! In addition to the headpiece I showed you in the last post, I’ll be wearing these sparkly beauties from Passionate About Vintage: 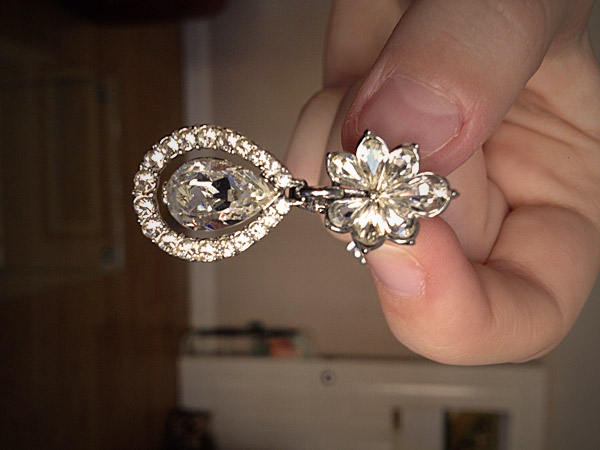 They’re bigger than I would normally wear. However, the rest of the dress is simple but it is bold so it’s better to go for something a bit larger and sparklier or else they might be drowned out (so Sassi said when I met her).

My something borrowed will be my mother’s godmother’s brooch. My mum thought she’d lost it and just found it last month, so it’s clearly meant to be!

Finally, Tom has said he’s in charge of finding me a bracelet. I’m not typically a bracelet person but one of the blogs suggested it as a nice final touch because brides’ wrists tend to be on show during a wedding (what with all that bouquet-holding and throwing!). I just thought I’d leave him a little hint for when he reads this post…. (If you don’t ask, you don’t get, right?):

Now, my face needs to looks the part… So off I went with my bridesmaid/make-up guru Sophy to one of my happy places, otherwise known as Selfridges. We scoped out the brands that didn’t charge £50 (seriously?!) for a makeover and ended up at Chanel, which offers free hour-long makeovers.

When it comes to wedding vendors, you know you’re in the right place when they ask about the wedding style, location and outfits. Amy at Chanel asked lots of questions about the wedding and my usual make-up routine – I knew was in for a treat. I hadn’t really thought about the style much so I all I told her is that I wanted a bit more of a statement than traditional bridal but not to the point of looking sultry (my grandparents might not approve of a bride with sexy red lips unfortunately!).

This is what Amy came up with: 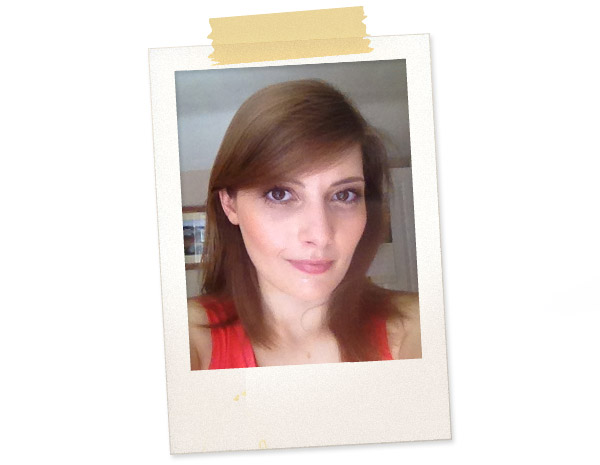 Other than the dark circles, I think I quite like it! My eyes are so big they look like they’re about to pop out of my head, but people tell me that that’s a good thing, so I guess I’ll roll with it. I may check out one other place just to be sure (Lancôme also offer free makeovers) but I’m really pleased with my first experience.

Oh, and any tips on getting rid of those dark circles would be much appreciated!

You may recall we were having choir issues with our local choir dictating to us their song choice. Tom and I had carefully picked out British, American and French hymns so having someone stamp all over our efforts was a little disheartening.
So Tom and I were left with three options:

We debated these options for a while as we hadn’t budgeted for ceremony music (and good singers don’t come cheap!) but my parents eventually convinced us to bring in professionals: if there’s one thing to get right, it’s the ceremony; that is the whole point of the day and the rest is just one big party. You can’t really argue with that (though I’m looking forward to the party a lot more right now than I am to walking down the aisle in front of lots of people!). It also helps that mum found a great group called Song of Freedom and they’ve agreed to learn our hymns. Bye-bye mean local choir!

Our other big music decision was the first dance. It’s only taken us nine months to decide…. I envy couples who have Their Song. I hope you know how lucky you are! Tom and I love music but I wouldn’t call us music buffs. I also have no memory when it comes to song names and artists, which doesn’t help.

We debated between choosing a somewhat original song and just picking something we really enjoyed listening to but was a bit cheesy, such as Michael Bublé (who doesn’t like a bit of Bublé to dance to?!). In the end, I made a note of the first dance songs mentioned on RMW and compiled a massive playlist for our mini-break. We whittled it down to two finalists and picked the one that had the perfect combination of swing and meaningful lyrics.

Oh and neither of us can dance properly so we shall definitely be taking dancing lessons. Watch this space.

Ok, I have definitely run out of words so I’m going to use Jo’s tactic and summarise the rest in pictures: 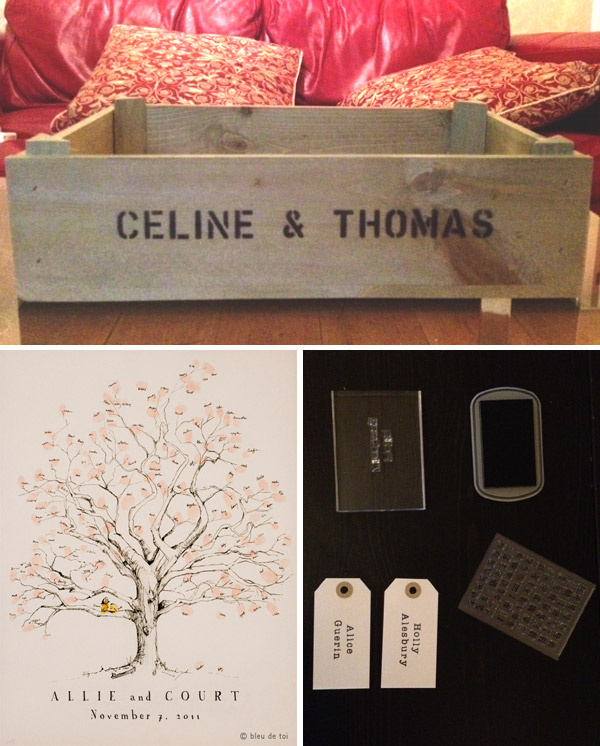 This is our guest ‘tree’, an alternative to the traditional guest book. Tom and I always write generic things in guest books (that might say more about us than it does about others….) so we decided to circumvent the guest book altogether. Plus everyone gets to have a bit of a play with inkpads so why not?

We’ve ordered the cardbox for any cards or gifts brought on the day. I thought it was a little different to the vintage suitcases but Emily and Hassan beat me to it on Monday. Well, they clearly just have impeccable taste.

Finally, there’s an example of our place names. For those of you interested, buy yourself an acrylic block and sticky-back stamps so that you can spell out the whole name first and then stamp. It makes things a lot straighter than traditional wood stamp blocks!

Phew, that was epic – I hope I haven’t bored you! And yet, there is still lots to do: flowers to be finalised, orders of service to be typed up and printed, seating plans to be made… The good news is that whatever doesn’t get done in the next six weeks won’t matter anymore!