I’m getting married this year!!!!!

I will officially become Mrs. Céline Kimberly in 177 days. Wowzers!
For most of 2011, I was as cool as a cucumber about all the wedding planning but after making a list of to-do’s at Christmas, it hit me that my slow and steady approach just isn’t going to cut it. After all, everyone knows the devil is in the details (I have actually had nightmares about forgetting confetti cones. Seriously)!
The hardest thing about organising a wedding so far away is having to compress a lot into short spurts. Fortunately, we were in Brittany over Christmas and we made sure to stay busy: we met with the florist, we visited the church again, we organised the Friday night rehearsal dinner and we started choosing readings with our lovely priest. All in the space of two days!

One of the ‘details’ I wanted to start bringing together over Christmas was how to decorate the church and the venue and I would never have succeeded without the help of Pinterest!

When I started researching decoration ideas (and it’s worth pointing out that creativity in this area is seriously lacking so I started early in the hope that research would solve my lack of talent!), I struggled to catalogue my ideas effectively. I would constantly be bookmarking web pages, taking screen shots, printing pictures with the intention of gluing them in a scrapbook and I’d end up sending dozens of emails to my mum and Tom with all these ideas. This was not only inefficient and haphazard but the daily email deluge soon overwhelmed my mum and Tom!

That’s when Pinterest came along, which saved my life and future marriage….
It’s essentially an online scrapbook where you ‘pin’ images to your boards. All the online pictures you pin are still linked to the original source and all the boards are public so people can start following yours and in turn you can follow theirs. Seriously, it’s the future of scrapbooking. My mum has registered to the website too so we can easily communicate ideas to each other!

Now I had the tools, I needed the inspiration….

A blank wall is one of the scariest things that could happen to me (I am very jealous of Shirley’s talent!) so I was relieved that the rooms in the Noë Verte are already well decorated enough that I didn’t need to add too much to it.

My ideas have been constantly evolving and what I liked 6 months ago I now find a little bland so I have been trying to avoid buying any item rashly. However, several ideas have (thankfully) stuck. The biggest one has been this beauty of a candelabra, which I found in a shop called Home and Pantry in Camden Passage, Islington: 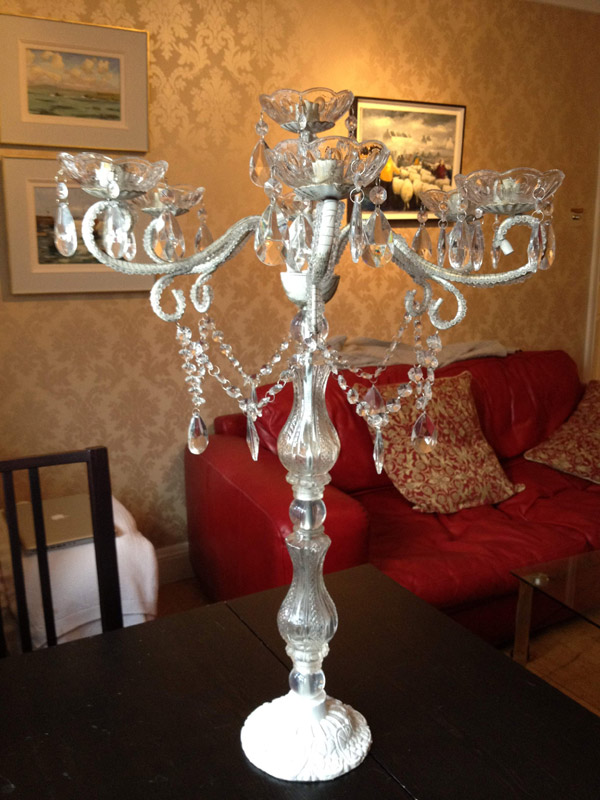 I initially wanted to rent candelabras to limit costs (I need eight to form centrepieces for half of the tables) but all the ‘glass’ ones I could find in France were actually plastic and therefore quite unstable. So I took the plunge and bought these ones with the plan to sell them after (one of my bridesmaids has already laid claim to one of them!). I have to say I’m really really pleased with them and I think they’ll look super pretty as centrepieces. I’d like to have the arms covered in foliage and flowers though I have yet to see a picture of that so I’m not sure yet if it’s possible…. The venue owner did emphasise that the candelabrum should be above eyesight so we may put a box underneath it to give it extra height and surround the base with flowers too. It’s still a work in progress but here are some pictures of candelabra arrangements that I quite like. 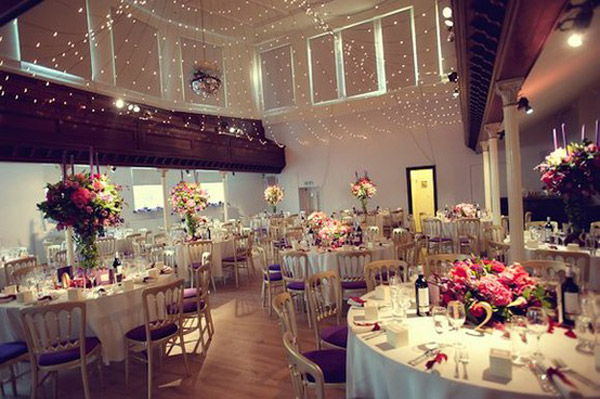 Photography by Eliza Claire.
This is bigger than I am aiming for but I like that’s it’s not just a ball in the middle. 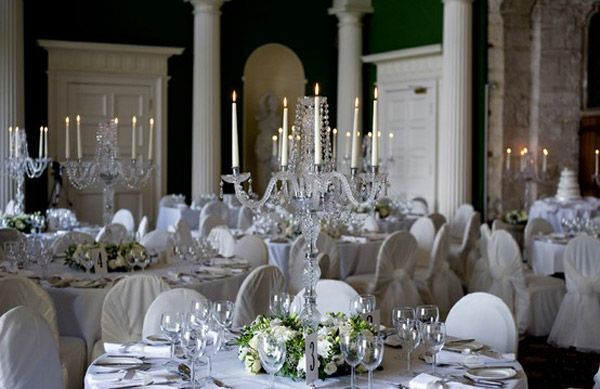 Image from love-ina-mist.co.uk
If we need to give it more height, we could add a crown of flowers at the base, though again this is bigger than I imagine it!

So that’ll form the basis of the decoration for the reception room. The outside courtyard will be covered in flowers at this time of the year and I don’t want to overcrowd it. I’m going to focus on finding lanterns to go up the stone staircase and I’d like to put a couple of flower arrangements placed in old milk jugs on half of the tables outside: 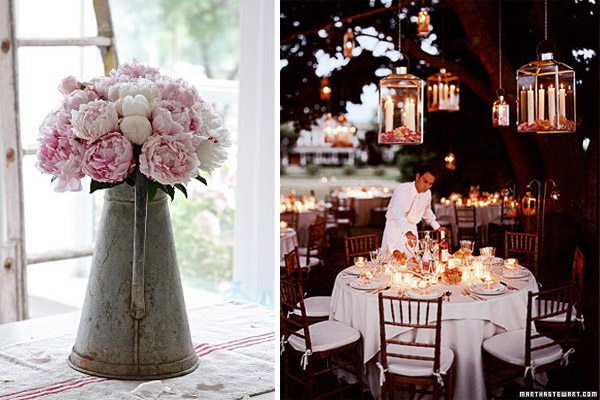 Our ‘Brief’ Meeting With The Florist.

Now that I had these initial ‘props’ and a large number of pictures of floral arrangements we really liked, we met with our lovely florist (who’s actually just our local florist – that was the easiest decision ever!). Tom recalls this meeting as lasting 10-15 minutes… of course, in reality it lasted about an hour and a half!

As with decorating in general, I don’t know much about flowers…. All I know is that I love hydrangeas, peonies and roses and I like pinks and greens and whites all bunched together (I’m still considering adding blue to that mix by the way, I can’t decide). I brought along my Mum’s brand new iPad with my Pinterest ‘flowers’ board up on the screen and showed her A LOT of pictures.

I was a little worried at first as the wedding trend in France is for contemporary and modern weddings. Fortunately, I had brought the candelabra along as well as the iPad (I know, that’s a lot of accessories!) and she immediately understood that we were going for more classic with a twist of vintage. And from then on, she suggested lots of exciting mixtures that all sounded amazing (even Tom was enthusiastic!).

She mentioned a lot of flower names but I’ll be honest, I’ve forgotten quite a lot of them…. I just know there’ll be lots of hydrangeas (they’re local to Brittany so we may end up just cutting them for our neighbours’ gardens), roses like the ones in the pictures and roses posing as peonies as peonies will no longer be in season. We’ll be seeing her again in April when she’s going to try out two different candelabra decorations for us to see, so that should be exciting!

Christmas was busy busy but we still have plenty of to get on with in January and February. We’ve been choosing the ushers’ and bridesmaids’ outfits and looking at wedding invites. I have to be honest, wedding invites have been incredibly hard to choose. We wanted to keep with the travel theme and somehow use maps, but there are so many options out there! Also, we’ve found it quite hard to decide how to incorporate both French and English into the invites – any ideas?

On a more personal note, I’ve decided this year to be fitter and, more importantly, healthier (I say as I tuck into a chunk of cheese…. Uh-hum!). The wedding pressure is part of the problem although, to be honest, I think there’s more pressure from the honeymoon than the wedding!! However, it’s actually more about feeling better in my own body than it is about physically looking skinnier. At the moment I spend all day sat at a desk, I’m too tired after work to go to the gym and I spend at least half of my weekend just sleeping… Oh and I love food.

So it’s time for some life-changes. I’ve switched gyms (I was never going to the other one!), I’ve signed up for a couple of personal training sessions to help kick-start a routine and I’m learning to eat/cook better food. I find the latter hard, especially at work, but I’ve been trying some of M&S’s new ‘fuller longer’ range for lunch and I’m actually quite impressed so far! I don’t tend to eat ready meals (we don’t even own a microwave!) but they’ve been pretty decent. Does anyone have any good books/ideas to recommend for tasty and healthy food??

Phew, it has been a busy few weeks! So who else has been using Pinterest (and what’s your username so I can go steal some ideas?!) and who else has found the decorating part of the wedding a little daunting? I hope I’m not the only one!

38 thoughts on “What Céline Did… Scrap Books And Flowers.”