It’s been a bit of a manic 6 weeks lovely people. I am officially a student again, based at uni one day a week, and school for the other four days – Ker-razy, but I’m loving it!

I have no further news on the veil (Mrs A Snr has been on her hollibobs), but we have made some progress in other areas…

So, our venue is now confirmed. Big relief. So, here it is… 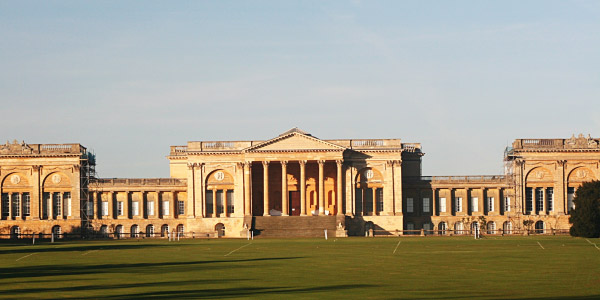 We’ve both lived here, both worked here, and I’ve been to school here. It was also where we had our first date (not bad, as romantic strolls go!) Suffice to say, it was a no-brainer when we came to choose a venue, and we didn’t even consider looking elsewhere. It may be prudent to point out that Mr A was NOT my teacher… I left school before he joined the staff. No overlap.
Although I did work in their events department for a while, and used to time my breaks around his… I may have had a teeny crush on him… 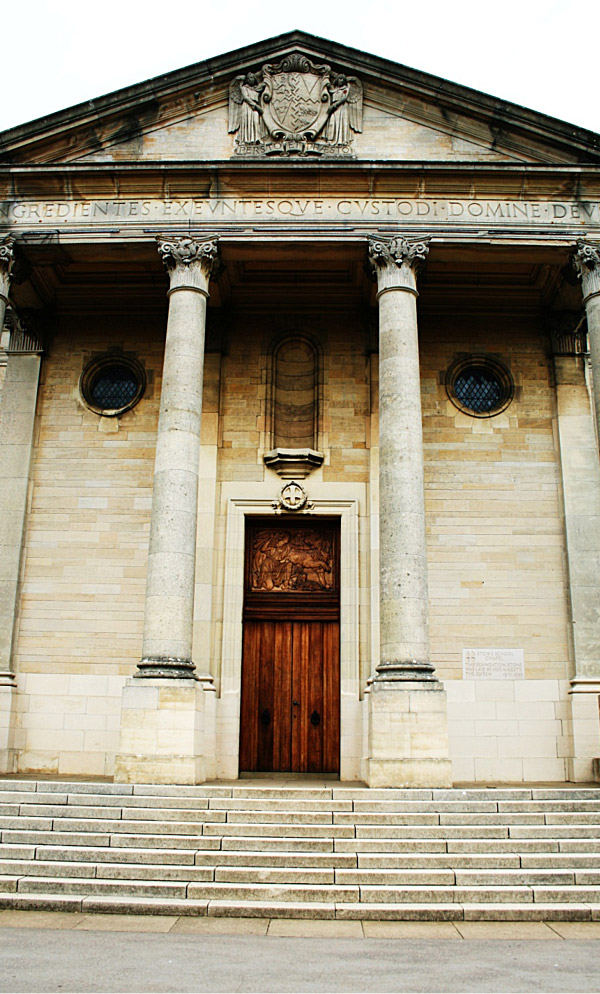 The school chapel, where the ceremony will take place.

It has a ruddy long aisle. I am notoriously clumsy, and lack the grace and poise of Kate Middleton. In short, I am concerned. As a pupil, I walked it hundreds of times, but as a bride… eeeeeeek!
Has anyone seen the episode of Kath & Kim where Kath sticks Velcro on her W-day shoes, so she doesn’t slip over? Well, Velcro won’t work on shiny wooden floors, so I’m considering Blu-tac…

So, confirming the venue could only mean one thing… time to send our Save the Dates (can’t get my head around the STD acronym, so have to write it in full every time!). As I mentioned in my last post, these were seriously fun to make, and cost absolutely nothing. Our guests loved them!

Hope you likey! To explain…

We had to include a list of accommodation with the Powerpoint, as we are struggling with availability because of the Moto GP at Silverstone. Most people have booked, which is marvellous, and means another thing has been ticked off the ever-growing to-do list!

Last weekend, we took out wedding insurance. Cheap as chips, and worth every penny. Seriously peeps, I can’t tell you how many couples I’ve met, who consider NOT taking it out. I honestly think it should be up there with venue, photographer, catering etc, in terms of importance. I worked with a couple a few years ago, who had booked a venue for their December 2007 wedding, only to hear after the July floods that it was so badly damaged, it was going to take over a year to restore. Thankfully, they were covered by insurance, but it could’ve been a different story. I’m really not trying to scare any of you, and I don’t work in insurance, promise! I just think it is invaluable for peace of mind pre-wedding.

We have also booked our fantabulous band, The Dukes of Havoc! Now, I’ve seen some good bands, and some not-so-good bands, at weddings over the last five years, but we saw these guys at our friends’ wedding in July, and thought they were bl**dy marvellous! Every song they played was genuinely brilliant, and there was something in there for everyone. It takes a lot of talent to play a Springsteen classic, followed by a Cee-Lo Green number, followed by The Kings of Leon, and then Stevie Wonder, and to do them all justice. And they played All Night Long, by Lionel Richie. SOLD!

To top it off, they are thoroughly lovely chaps to deal with, have offered to learn our first dance song, and have given us the option of adding in additional players (keys and/or brass) nearer to the wedding. Such a pleasure to deal with, and great value for the talent and service they offer. We’re so excited about having them play for us!

Rather scarily, I lost a diamond out of my engagement ring a fortnight ago! I was quite nervous about contacting the company who made it, in case they thought I hadn’t been looking after it, but they were so, so helpful, and had it fixed within a week! In fact, it arrived back a few days ago, looking VERY shiny (they’d cleaned and polished it too), just in time for us to celebrate being engaged for a whole year! 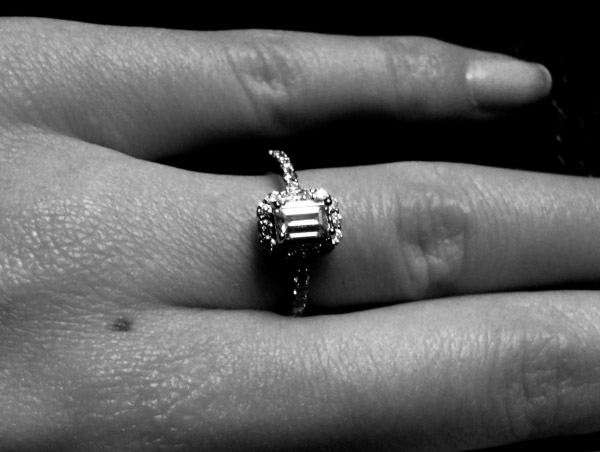 I can’t believe how time has flown, and am über-conscious of how quickly the wedding will come around. There have been quite a few occasions in the last month, where I’ve wanted to be back in Venice – ultimate escapism! 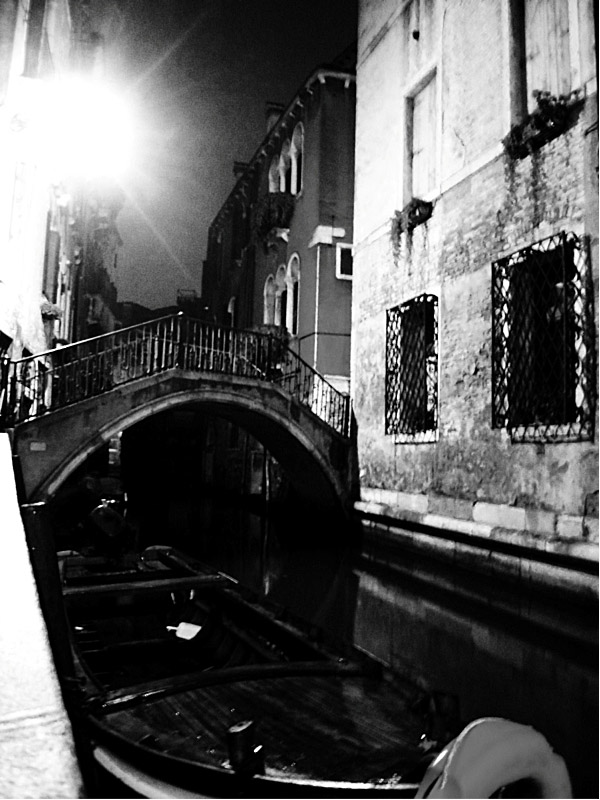 Ponte de l’Agnello (the bridge where Mr A proposed).

Finally for this post, I wanted to introduce two very important girls, who reliably informed me a few months ago that walking up the aisle will be fine, after their Mum (Chief BM) and I had watched them walk up and down it roughly ten times! They are SO excited about the wedding, that I thought they might just burst when I took them to try on bridesmaid dresses… 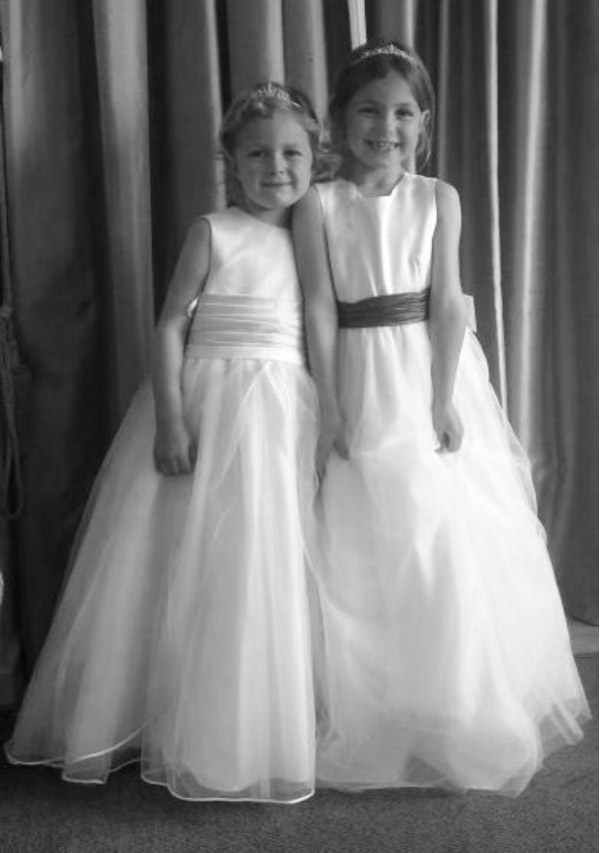 I think there is a good chance they might steal the show ;o)

And that is all I have to report… I do know that my hen do is being planned, but other than the date, I’m in the dark. Dolly Parton theme = still unconfirmed(!)