Kelly here with my latest instalment and this month it’s all been about the Dee to the I-Y. Yep, I have attempted to tackle some little projects I have had up my sleeve and whilst the Blue Peter presenters can rest easy, I have been quite pleased with some of my results 🙂

The first somewhat on-going task features my now rather large collection of jam jars. Months of collecting, scrubbing, scraping and gluing have paid off and I now have a rather fine assortment of lace and twine glassware. The inspiration came from this: 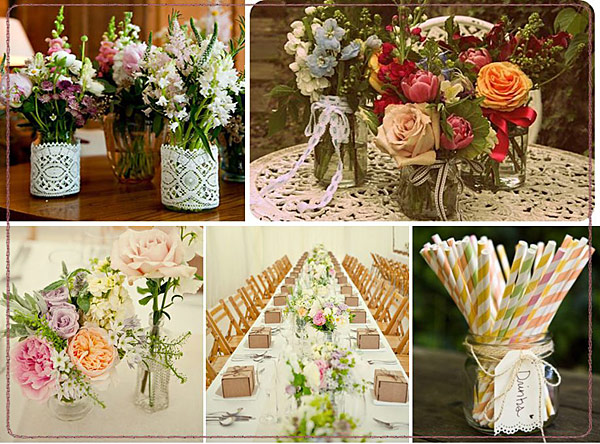 And here’s some I made earlier: 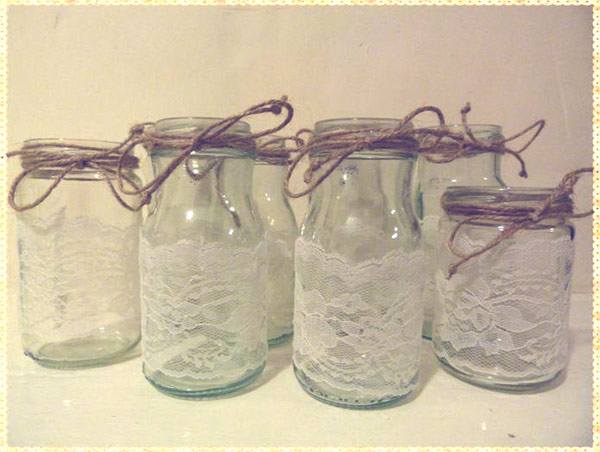 The plan is, the day before the wedding (pre manicure of course), with the help of friends and family, to make arrangements with flowers bought from a local wholesaler then place around the reception room to make it look pretty.

Along with my collection of jars, I also have a collection of baked bean tins. Yes my colleagues may mock, but who else can boast a pretty pastel stream of tins billowing in the wake of their getaway car? Yep I am sad enough to have spent night after night painting baked bean tins. To do this, I bought a pot of white gloss paint and some tester pots of matt paint, mixed a small drop of the latter with the gloss to get the right shade and painted. And painted. 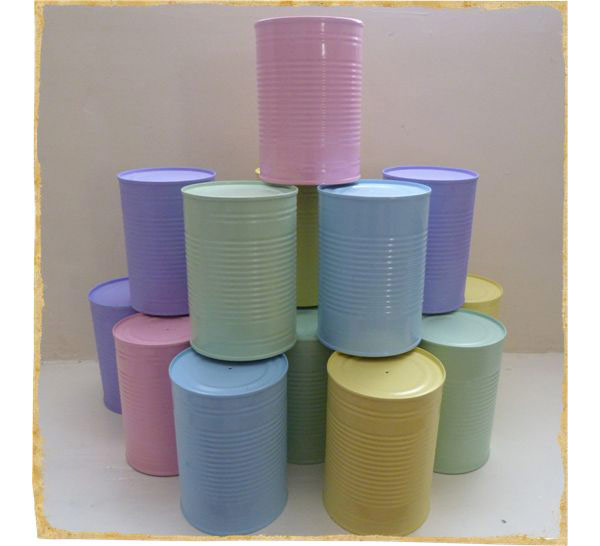 I bought two of these 1950’s frames from Ebay for £10 (barginous). They had dodgy watercolour paintings in them (I hope they weren’t worth a fortune) which I cut out, then I cleaned and painted the frame. So far we have done one in yellow, and we will paint the other one in blue. Here is a before, during and after:

The plan is to attach lengths of twine from side to side. Make photos from our travels to look like Polaroid pictures and peg them on to the twine and display at the reception. Here are a few of our Polaroid-esque pictures: 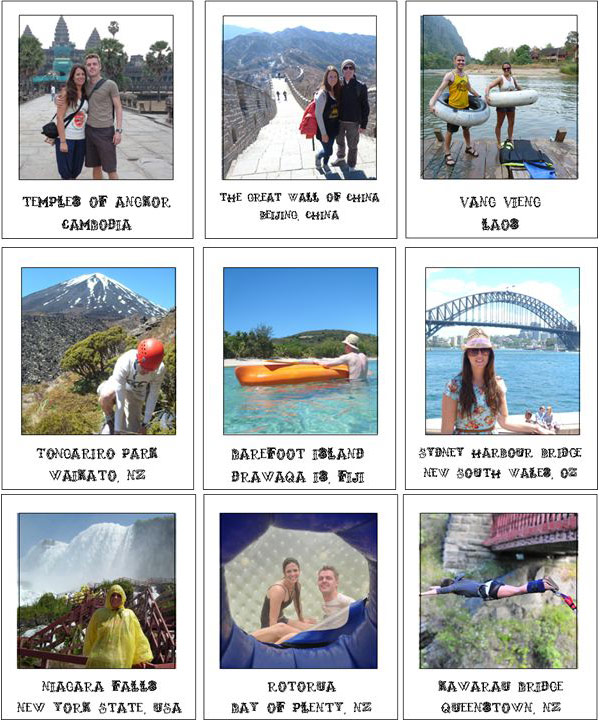 If Carlsberg DID do housemates, Cath Kidston would be mine. Although Andy is not a massive fan of the prints and polkas (I find guys don’t always “get it”), it hasn’t stopped me adding a few florals to the day. Because we are having white linen and white chair covers, to inject a bit of colour into the reception, I decided to make some table runners. I bought two sets of curtains, cut each panel into 3 strips and edged each strip with some lace trim purchased from eBay. Don’t laugh at my sewing machine; it’s an oldy but a goody! 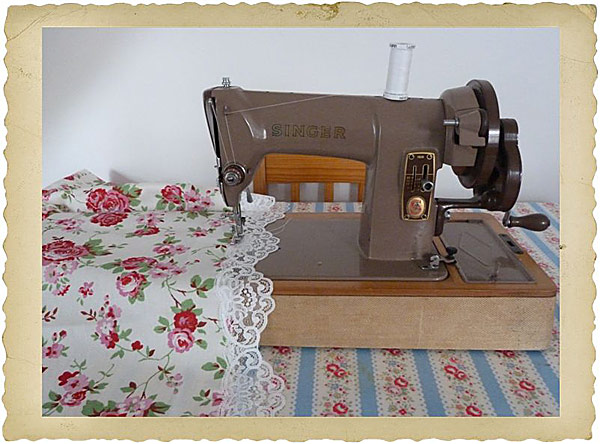 The flower side of wedding day planning took a bit of a back seat to be honest. Don’t get me wrong, I think flowers are an important part of THE day, however, with running the risk of sounding a little ‘nuts’, I realised that I would never have, ahem, full control on this aspect i.e. you say what you like, show a few pictures then you put your trust in that person to create your ‘vision’ on the day. So with 6 months to go, we (Andy) decided it was about time we got something sorted. A tap, click and a Google search later, we had lined up a meeting with a florist.

Now, by no means do I class myself as an expert in all things floristry, but I’m no mug either. Despite choosing a lot of Gypsophilia (cheap) and hydrangea (big flower head things = budget friendly), a few days after the meeting the florist quoted us a somewhat, erm, ‘exuberant’ price. We were a tad surprised as judging by the conversations we had had at the meeting, we were expecting something quite different. After a tactful questioning (inquisition) by email later, I still wasn’t happy. A tap, click and a Google search (take 2) later and I came across Green Flowers. Not only is their concept brilliant; they source from local growers, use ethically produced products and where possible they deliver by bicycle (how cool is that??), but their prices were a lot more reasonable too. Despite not meeting in person (this is arranged for next month), I felt confident in handing over our deposit and putting a big fat tick next to ‘florist’ on the to-do-list.
So, the floral ‘vision’ looks a bit like this: 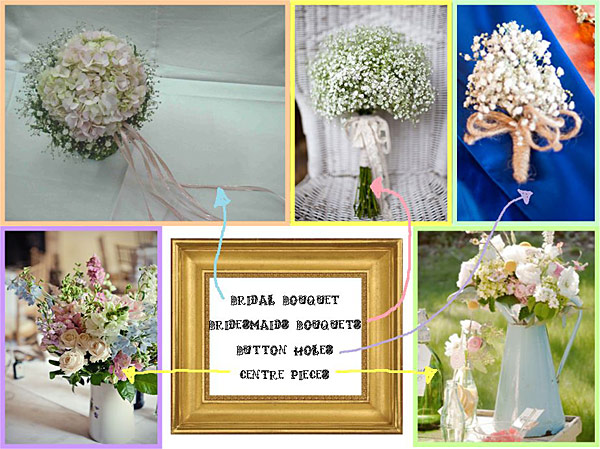 Coupled with a few ideas I have for the Church, all in all I am very happy. Interesting fact alert; the groom often chooses a flower for his buttonhole which also occurs in the bride’s bouquet. This is a vestige of the time when a Knight would wear his Lady’s colours to display his love (you learn something new everyday and all!).

I have a terrible habit of turning up to a wedding having had breakfast but no lunch. Come post ceremony I’m starving and I’m one of those people trying to strategically place themselves so that they can catch the canapé tray on the way out and back in to the kitchen whilst Andy tries to pretend he doesn’t know me.

So, with the budget running tight, canapés seemed like an expensive option when really they are just the fancy equivalent of cheese and pineapple sticks or cocktail sausages. With a bit of research and weighing up of options, we decided to venture down the route of serving ice cream. 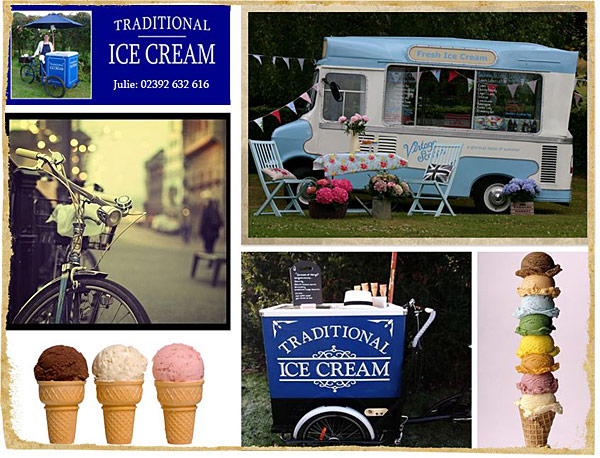 We looked into various ideas and decided to hire a vintage ice cream bike from Traditional Ice Cream. Julie, the lady behind the brand is so lovely and if you’re after a village fete inspired day, she also has a sausage cart (Andy’s first choice) and a Classic Crepe option too. The next obstacle will be deciding/arguing about the flavours; I mean who actually likes Rum and Raisin? (She says waiting for some terrible backlash!)

So that’s about it for this post folks. I would love to hear about some of your own DIY projects you’ve got going on.

P.S. Just to leave you with one final thought… 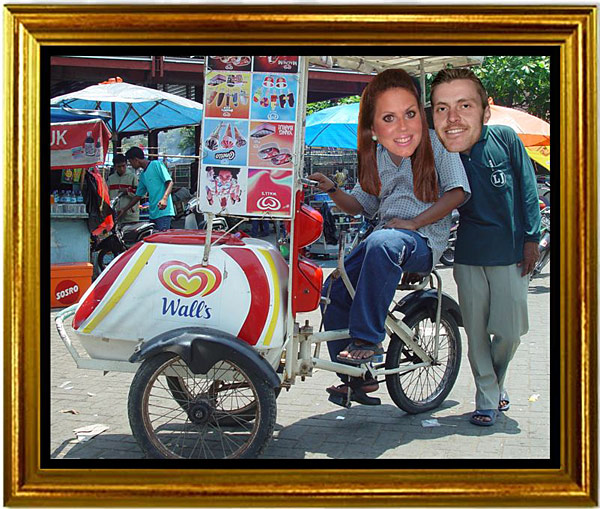 36 thoughts on “What Kelly Did… Jam Jars, Bean Tins and Ice Cream Cones.”