That is the word that I would use to best describe myself these days. Also excited. I am hovering between overwhelmed and excited. It’s precarious.

So much has happened in the last 6 weeks that its making my head spin to think about it, but here goes….(deep breath)…we have met with our florist and decided on bouquets, button holes and centrepieces. And my oh my are they going to be purdy! I wish I could tell you which flowers were being featured but this is so not my forte. Alls I can tell you is that they are super colourful and smell really nice!

We met with our jewellers and tried on our wedding rings….which was freakin awesome! What an odd thing that this little band of gold will forever signify (after the 22nd July), that I am a married laydee. Le sigh.

We also met with our wedding co-ordinator and ran through the whole day and timings and food and drink and some more food. It was actually after this appointment when I was left with a feeling that could only be best described as “woah”. I never considered the level of detail that we needed to cover, e.g. how long it will take to shepherd in and seat 115 people into the room for the wedding breakfast. How they allocate the time for the speeches. Do you have a cake? Do you want it on a separate stand? Do you want the red carpet (still deliberating!)? When will your florist turn up? Who is your DJ? What size shoes do you wear? Ok ok, I threw that one in there but you get the jist!

We had our menu tasting at our venue which was seriously fun, esp when the Chef was asking us if we wanted to “tweak anything”. I nearly died with barely surpressed glee that he was asking us and then promptly asked him if he wanted to come home and cook for me permanantly!

The bridesmaid dresses have arrived, all ready and fitting my ladies beautifully in their colourful glory.

Me and the ladies had our hair and make up trial which was more amazingness! Definitely the best way I have found yet of spending a normally dull Monday afternoon! I deliberated about including some photos but then decided against it (sorry). Purely because Mr B looks at my blog when its published and I don’t want to spoil the surprise!

I had my Top Secret Hen Do in Edinburgh, but more on that later…

And finally (phew), Martin and I celebrated our 6 year anniversary. It was poignant for me for a lot of reasons, including the fact that it’s so close to our wedding and the next time we celebrate an anniversary, it will be our first wedding one. Like resetting the counter as one of my bridesmaids put it!. And (please excuse the following mushiness), I would like to take this opportunity to thank my lovely fella for the past 6 years. I wouldn’t have wanted to share it with anyone else. I love you.

Sweet nothings to my future husband aside, I have realised a few things in the past 6 months, which I am sure you clever lot have already figured out (I can be slow at times!):

Pennies make pounds. Sometimes they make large piles of pounds that can be used to buy fun stuff and high jinks. And as it became apparent that we weren’t going to have the full 150 guests for the day (we have a smaller-but-not-by-much 115 instead), working out the budget became fun. Yeap, I just used budget and fun in the same sentence. For every penny-that-became-a-pound we saved, we have ploughed that back into the day for our guests. Just little gestures here and there that we hope they appreciate and make our day as memorable as the ones who have come before us.

The 22nd July 2011 is the day that I get married. To Martin. I become a wife. His wife. A Mrs. He becomes my husband. By the time you read this, I will be 6 weeks and 1 day away from officially becoming Mrs B. Holy crapballs Batman!

And finally, I have learned that you just can’t please everyone. There will always be a guest who doesn’t like the starter/main/dessert/wine/music/venue (delete as applicable) and the important thing is to realise this and move on. The vast majority of people won’t give a hoot as its someone else’s day and not theirs. And for those individuals that will come, turn their nose up and comment, well, there are a couple of phrases that come to mind, but as I am in polite company, I shall refrain!

And so we come to the weekend. Sat 28th – Monday 30th May. Location: Edinburgh. Knowledge of the weekend? None until I was actually in Edinburgh! In a moment of obvious stupidity now in retrospect, I decided that I would ask for one of two locations for my do (Edinburgh or Bristol) and then leave the rest in the hands of my extremely capable bridesmaids. Stupidity because I am like a child when it comes to surprises. And I tried anything and everything to find out clues. Wheedling, moaning, whinging, sly questions, outright pleading. Nothing worked, not even a smidge. If MI5 is hiring, I have 3 ladies I could recommend!

But was it worth it? The cloak and dagger of it all? The way my sister had terrified everyone into keeping schtum? Hells yeah.

Rather than bore to you all to, erm, boredom with a heavily detailed description of the weekend’s escapades, I will instead summarise and amuse you all with some photos (sorry hens!).

So Saturday saw a smooth journey up to Edinburgh and the surprise of one of my oldest friends turning up when I thought she couldn’t make it. There were tears! 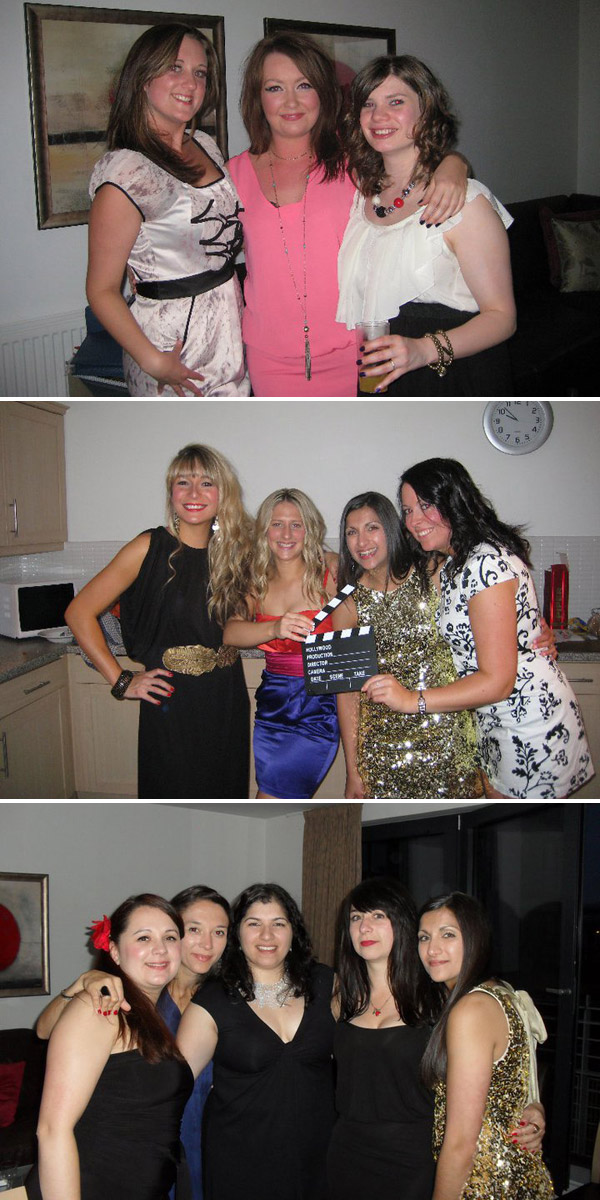 This was followed by a ghost tour (scary yet educational!) and the big night out which had a Hollywood Glamour theme and involved feather boas and me winning my first Oscar. If you know me, this was possibly the greatest thing ever! 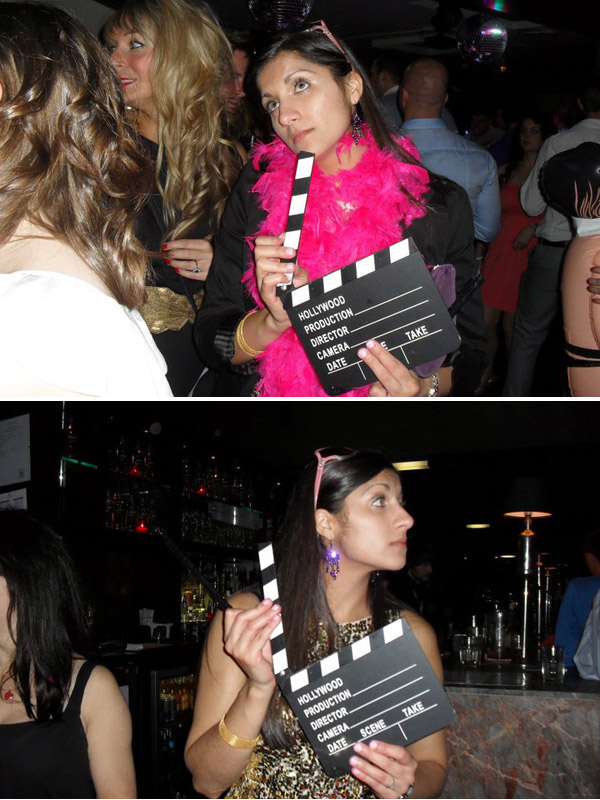 Sunday involved My Hangover and shopping. Edinburgh is so amazing for many things and shopping is definitely one of them. Everyone gathered for afternoon tea at Tigerlily’s which was astounding. The cakes! The cakes! And then Sunday night was rounded off in true classy style with wine tasting and a 3 course meal. Le sigh (again). 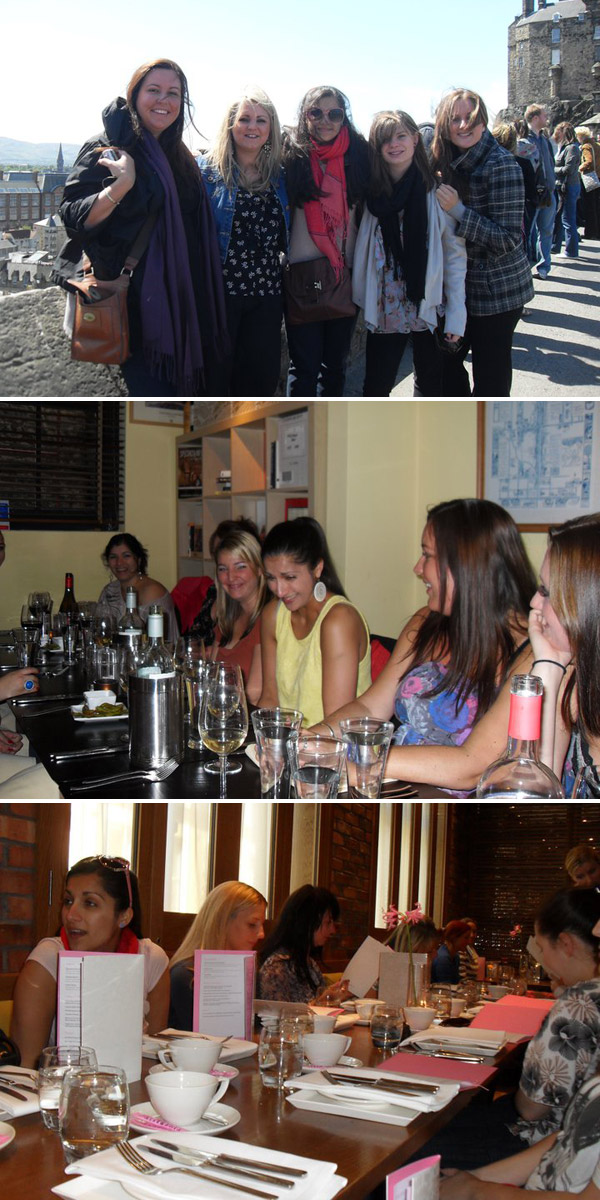 I was lucky enough to have 13 ladies altogether, from old friends to work friends to family. A truly gorgeous bunch of ladies that gelled so well, you would think they had known each other for years. I was touched by the effort that all of them had gone to for my weekend and I cant wait for us all to be together again in 6 weeks and 1 days time! 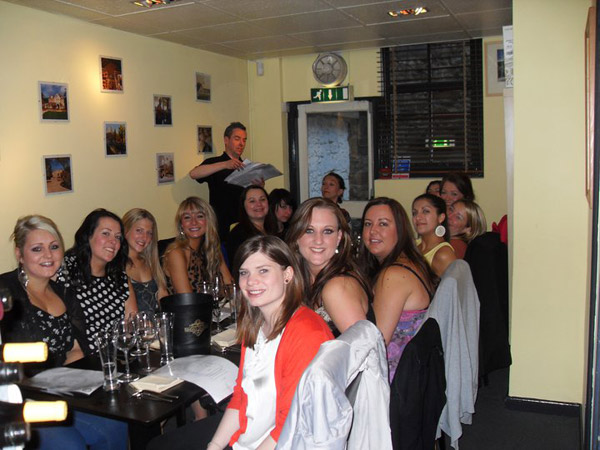 But the biggest thanks goes to these 3 ladies: 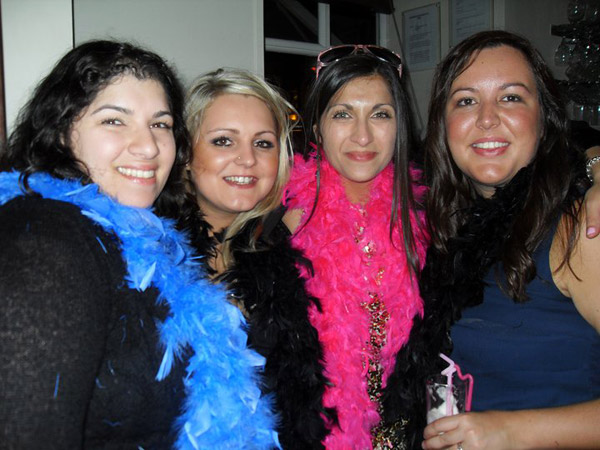 An amazing trio who planned my weekend with military precision, style and grace! Everything went flawlessly and I was so pleased for them as I know how hard they had planned the weekend – they made me quite paranoid with their secret hen do whispering!

Becky is at her happiest when dunking a slightly chilled chocolate digestive into a very warm, very milky cup of tea. She also loves her job and pinches herself every day to make sure that she isn’t in a graphic design dreamworld.
Tags:Rock My Wedding Real Brides |Hen Do |Mahj