If you missed part one of RMW Real Bride Shirley’s W day report then don’t hang about, check it out right now!

And now prepare for a seriously big pop of contemporary colour as we join the party, complete with more singing and dancing than you can shake a hugely talented stick at!

Photography is by Ben at Touch Photography and make suere you check out the video at the end of Shirley’s report which was shot by Jeff at Jeff Woods Visuals.

Ok, for the last time, Shirley… Over to you. 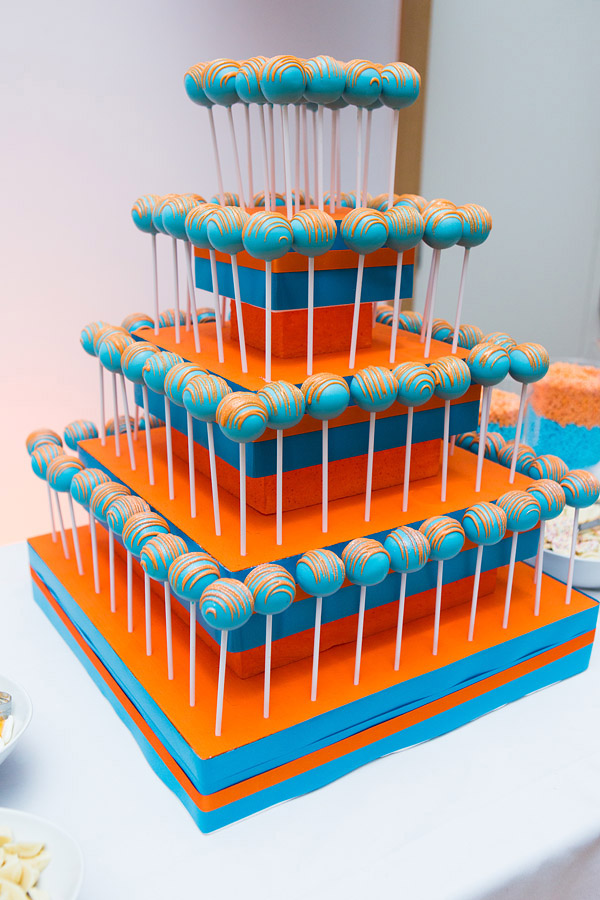 As we entered the reception room, my daughter sang ‘Count on Me’ by Bruno Mars – this was incredibly special to us as she has an amazing voice and really wanted to contribute to our day with music. It’s not a love song but the lyrics talk about how you will be there for each other no matter what and this really sums up a fundamental part of our relationship. We were so proud of her and everyone still talks about how beautifully she sang and how talented she is. I’m a proud mummy! 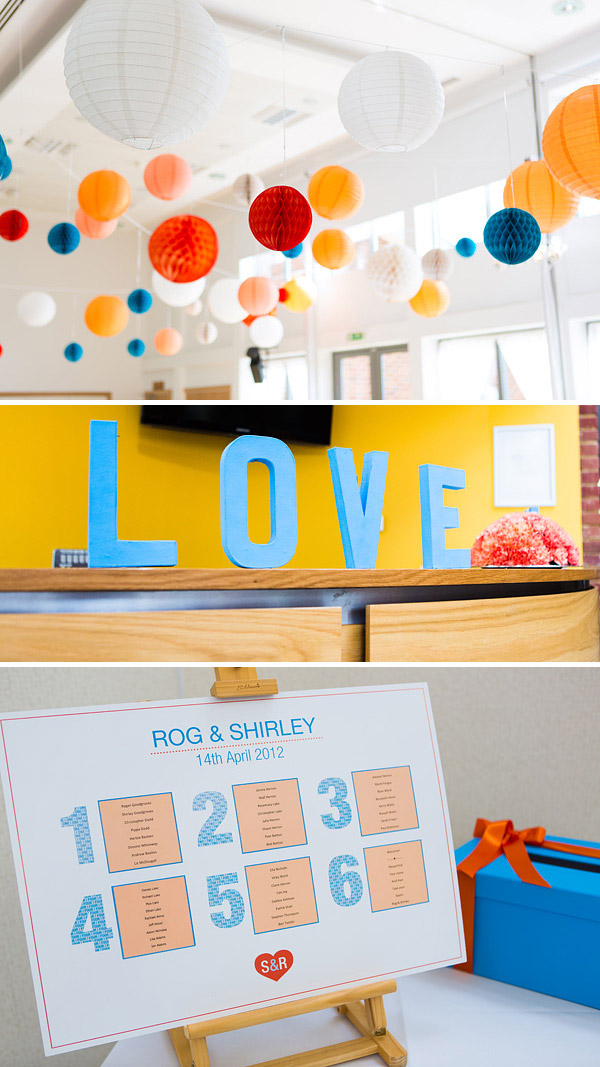 Everyone is a DJ

For the rest of the wedding breakfast we played an iPod playlist compiled from our guests suggestions on their RSVP cards plus some chilled out tunes that we chose. In the evening we also had an iPod playlist as my one requirement was that the music could be danced to. In hindsight, compiling the playlists took an inordinate amount of time and became a really stressful chore. It was a cheaper option but there were many times when we wished we’d just paid for a DJ and primed him on what songs to play! 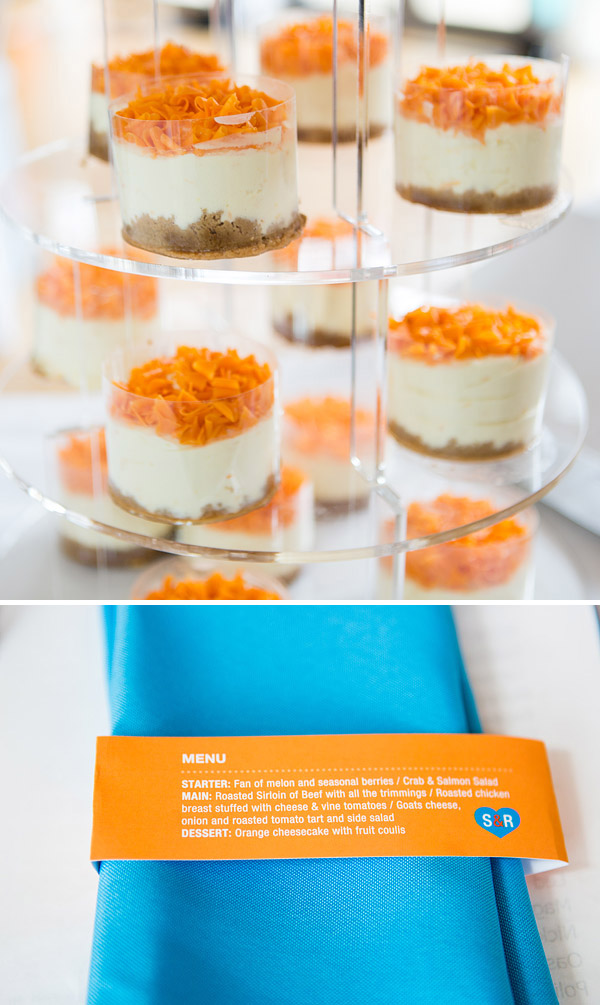 As I can’t eat wheat or gluten, we worked with the venue to try and ensure that the food was as gluten free as possible. We had canapés served immediately after the ceremony which were provided by Truly Scrumptious – Tania was an absolute angel as we only booked her 2 weeks before the wedding and she still managed to rustle up a whole feast of gluten free canapés which went down a storm.

For the sit down meal, apart from the Yorkshire Pudding on the roast beef, everything else served was gluten free and I don’t think anyone even realised. For our evening guests we had a buffet of bacon rolls (including one gluten free one for me!) and chip cones plus a sweetie bar.

The cake was always going to be difficult and a traditional cake was not an option. We considered many alternatives, but were put in contact with Rebecca from Rebecca’s Cakes and assured that she could offer a gluten free choice. I wasn’t sure what to expect but I can tell you that Rebecca is totally brilliant. We decided on a gluten free cheesecake and she gave us lots of samples in a variety of flavours and recipes as well as being willing to try out recipes that I’d found from my google searches.

In the end we chose an orange flavoured cheesecake with chocolate orange curls on the top. We had one big cheesecake (to cut) plus individual cheesecakes to serve and they looked amazing and tasted even better. The venue plated them and drizzled a bit of coulis around the plate. Unfortunately we forgot to use the cake topper that we’d spent ages sourcing, but only realised the next day and it was too late by then. For our evening guests, we ordered some cake pops from Pop Bakery in turquoise with orange drizzles. They were very popular! 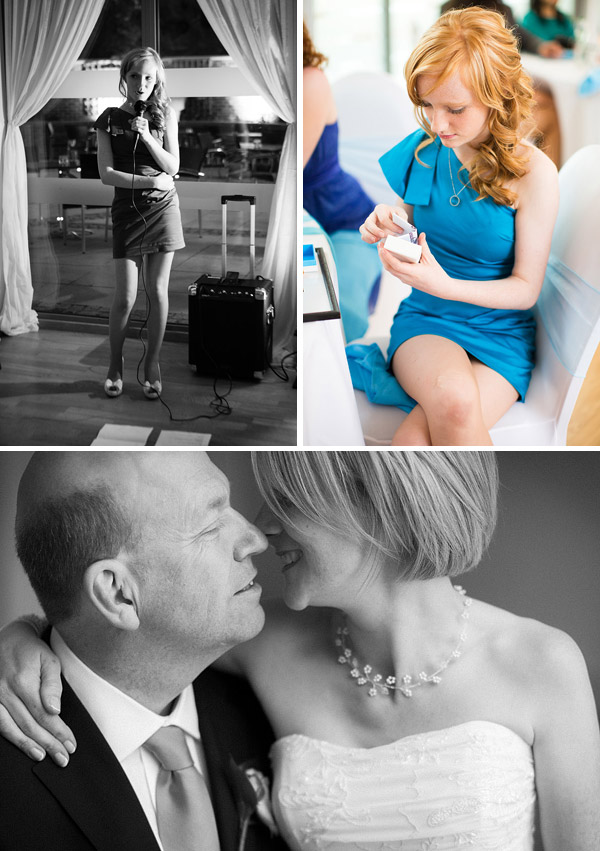 We didn’t have a special song for our first dance and actually found it quite difficult to choose something that we could dance to, that we liked and which didn’t have ‘break up’ type lyrics! We chose ’40 Years’ by Tone Damli after I heard it while out dancing one night and fell in love with the track. It has really beautiful lyrics and the right sentiment. What was more special though, was that Rog spent 4 months coming along to dance classes with me just so that he could dance our first dance. 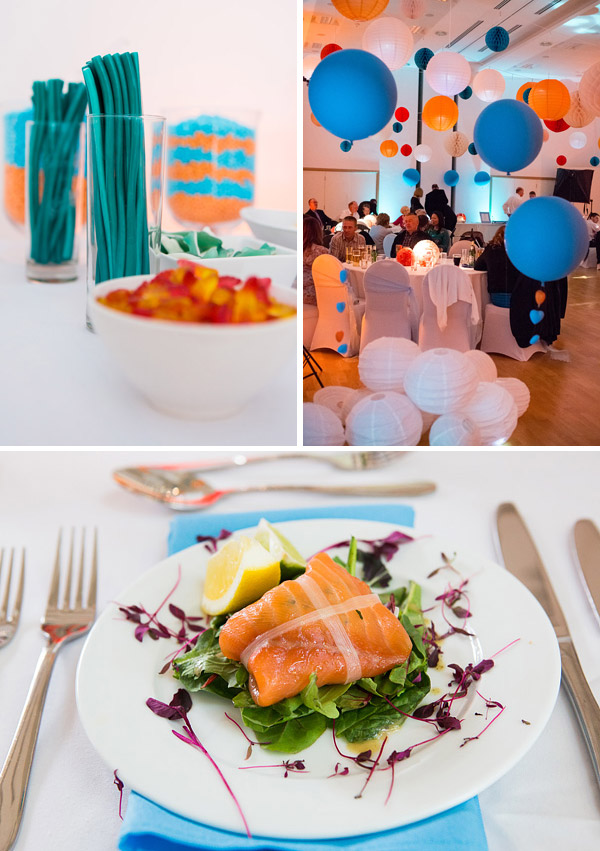 My dance friends were seriously impressed by him dancing as not many of them knew that he’d been learning (and the dance was freestyle and not choreographed). We didn’t want to dance on our own for too long though, so we primed a few friends to cut in on us when we gave the nod, and then more friends cut in on us again so that by the end of the track the dance floor was full. 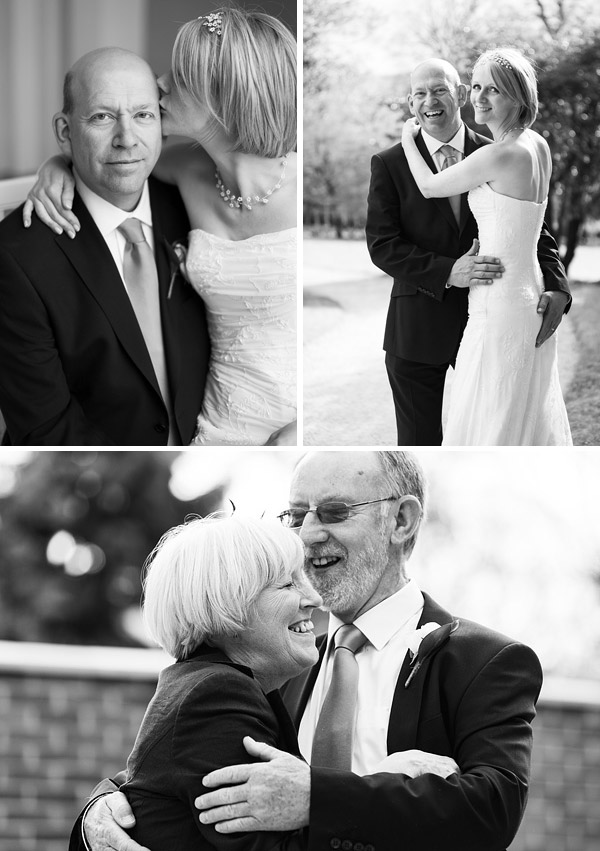 I decided not to have favours and instead arranged a secret surprise for Rog by sponsoring a teen through a music therapy course run by Winston’s Wish. Winston’s Wish are a charity who support children who have suffered a bereavement of someone close to them, often a parent. Music therapy is a cause close to Rog’s heart and we already support Teenage Cancer Trust plus Rog’s dad died when he was a teen, and so it was really appropriate for us to support Winston’s Wish. 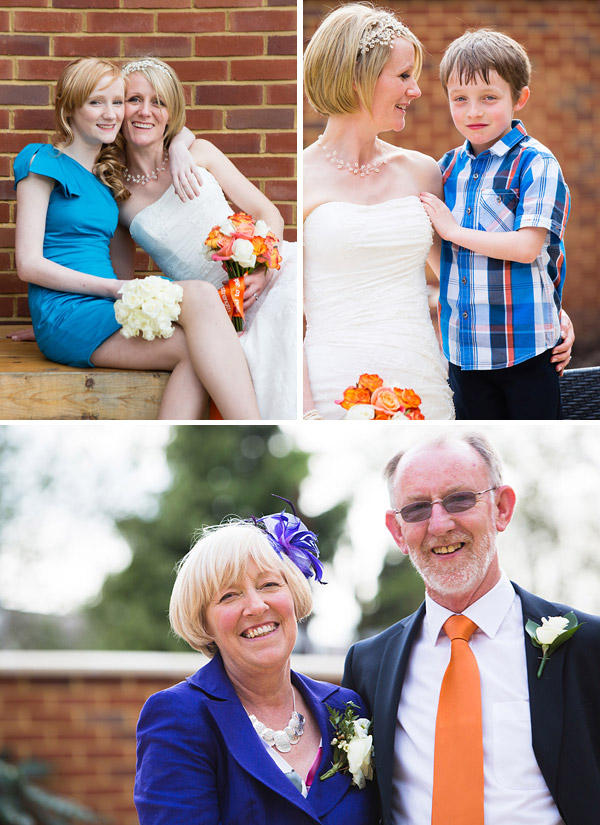 I’d been up to Cheltenham to visit them and also arranged for them to make a video message which was played on the day but it was a real challenge keeping it all secret as I didn’t tell a single person what I was up to! I was nervous about springing the surprise during my speech but it was very emotional for the whole room (in a good way!) and Rog wiped a tear away when I told him so I knew I’d done something that was very personal for him.

The room decoration was a bit of a challenge to be honest – I wanted a very contemporary look and this is incredibly difficult to achieve as most wedding companies are focused on classic, traditional or vintage styles. The spherical shape of the flower balls ended up setting the tone for the rest of the décor.

I chose giant balloons (although 2 of the 5 helium canisters we ordered arrived empty and it was too late for us to get more) as well as spherical lanterns and paper balls hanging from a mesh system provided by StressFree Hire The ceiling in the venue was really high and I wanted to make it feel more intimate. They also supplied uplighters in orange and turquoise and some disco lights which helped make the evening feel very different from the daytime. Berkshire Wedding Hire https://www.berkshireweddinghire.co.uk/ supplied table linen, chair covers and sashes. Both décor companies were really professional and worked a long day to get everything set up and taken down on the day – I don’t envy them!

Our table stationery & plan was designed by Amy Adams who I found on Etsy. She created all our bespoke stationery designs from invites to menu wrappers and I really can’t recommend her highly enough. She worked patiently with me and my hair brained ideas to produce a stunning and contemporary set of coordinating items which got so many positive comments from our guests.

After a lot of thought, we decided to get an ‘on the day’ wedding co-ordinator because I was worried that all my forward planning would be for nothing if there wasn’t someone there to make it all happen properly on the day. I found it hard to find someone who understood what I mean by a contemporary wedding and so I took a chance and asked fellow RMW Contemporary Cool entrant Rachie from achichiaffair if this was something she would consider doing for us. Luckily she said yes, and it was one of the best decisions we made.

She worked her socks off and was the first to arrive and the last to leave. She spent a long time in advance making sure she understood what I wanted and how everything should look, contacted my suppliers, visited the venue … I could go on! If you’re considering having any kind of wedding co-ordinator, I would have to wholeheartedly recommend the experience in general and Rachie in particular. Go for it!

What made our day special to us ultimately was trying to stay true to what was important to us as a couple. We spent half our budget on photography/videography and a good chunk on decoration, then everything else was fairly budget. We also decided to keep numbers small which meant we could add little touches like personal handwritten notes to each guest on the back of their name-cards. Different things are important to each couple so my advice would be to work out what your top three important things are and stick to them.

Let Everything Sink In

The other thing I would recommend is to take some time out during the day to just let everything sink in. We’ve both been married before and felt that our previous wedding days had passed by in a blur, so we worked hard to build in some time just for us on the day. We got Ben and Jeff to drop us off at a local pub after doing our portrait shots and we just sat for 45 mins talking about the day and sharing what we enjoyed so far before they came back to pick us up. We did get some strange looks walking into a country pub in wedding gear but it was fabulous to have some alone time. 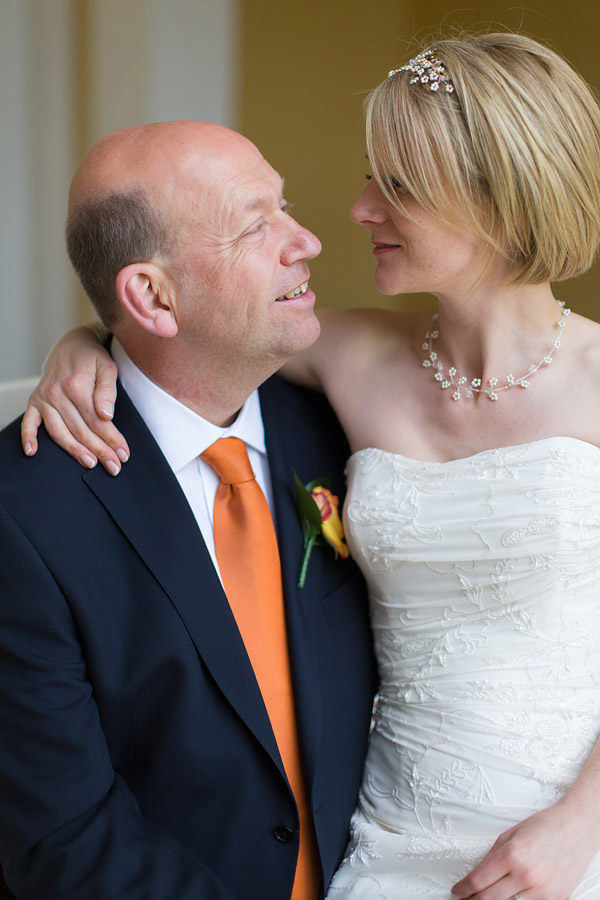 And lastly, a piece of advice to suppliers … keep in contact with your couple – it costs nothing to drop them an email every so often checking in with them, making them feel special and that you’re as excited as they are about their wedding day. It sounds obvious but many suppliers don’t do this and for us, it made the difference between the suppliers we loved and have frequently recommended and those that we felt just did their job. 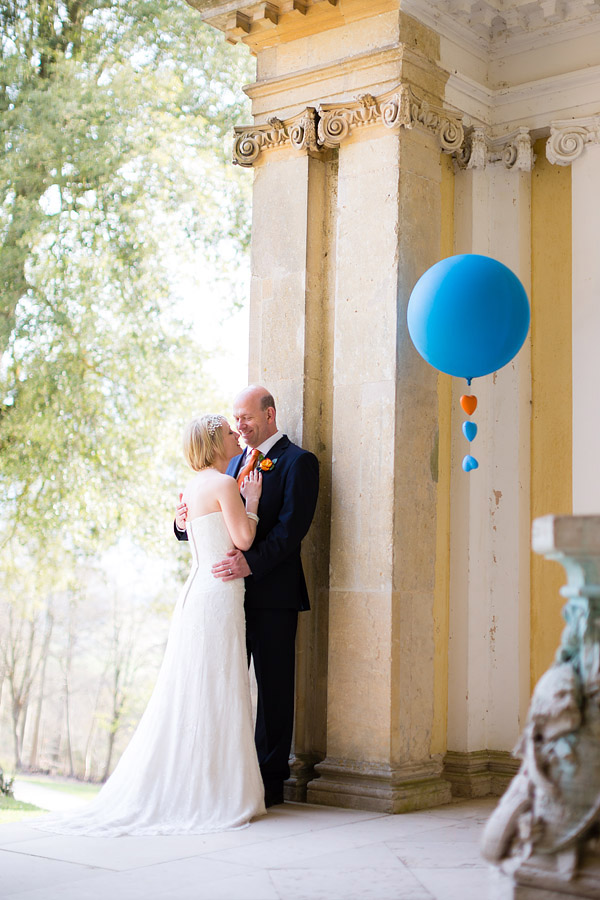 So there you go – now you know all about our day. All that is left to show is our wedding film that was shot by Jeff Wood.

Thank you for reading my blog entries over the last year and I hope you’ve enjoyed seeing the final result! Good luck to you all with your own weddings and enjoy every second.

It has been fantastic to watch Shirley and Roger’s plans unfold. Their contemporary wedding dream was well and truly realised and they succeeded in having one of the most colourful weddings to ever grace the RMW pages.

The reception looks like it was bags of fun too… It makes me want to go and dig out my old dancing shoes. If Only I had some.

Thanks to Shirley and Roger for sharing their big day with us and thank you to Shirley for sharing her plans from day one. Always honest and from the heart it has been a hugely interesting and entertaining account.

Best of luck for the future guys.

33 thoughts on “What Shirley Did… Contemporary Cool. (Part 2)”