Afternoon lovelies …. this month I’ve been trying to pull together my venue decor. My venue Burnham Park has a biiiiig white room and that’s where we’re having our reception. It’s lovely because it’s big and white and has huge windows to let in the light, but it scares the living daylights out of me for the same reasons! I’m all for a blank canvas, but this one has 6m high ceilings so we’re definitely on the extreme end of large! I have the added challenge of achieving an intimate, light, bright look for the daytime where we’re only having 40 guests and then transforming the room into something totally different and dramatic for 120 guests in the evening.

I had originally contracted to use a decor lady who I met at a local wedding fair. I got on with her fabulously and had got quite a way down the planning route with her when she suddenly pulled out without explanation leaving me in the lurch. After a bit of frantic googling, I placed a panicked phone call to Doug at StressFree Hire. Let me tell you, Doug is the sort of guy you *need* on your team – he listened patiently to my woes, my needs and my wants and basically let me get all my angst off my chest. Then he said ‘so when exactly is the wedding that you urgently need to sort all this for?’ and I had to confess that actually the wedding was in ummm 11 months time and actually it wasn’t that urgent. Ahem.

Anyway, many emails and a site visit later, Doug has helped me narrow down the choices and costs for decorating the venue. Top of my list was something to reduce the ceiling height – I had thought that my only option was giant helium balloons as we’re not allowed to attach anything to the ceiling but Doug has an ingenious solution. Basically it’s set of 4 tower post things arranged at the edges of the room which are about 4 metres tall each and from the top they can string a mesh system between the 4 posts. This then gives them something to hang lanterns from. LOTS of lanterns. And the lanterns are going to have little lights in them so as it gets dark, they’re going to twinkle like a canopy of stars. The lanterns don’t come cheap when you’re having lots of them, so in between the lanterns, I’ve bought some honeycomb tissue paper balls to hang (these aren’t easily available in the UK and when they are, they’re expensive, so I’ve ordered them in the US and someone I know is visiting soon & is kindly bringing them over for me). It’s going to look a bit like this: 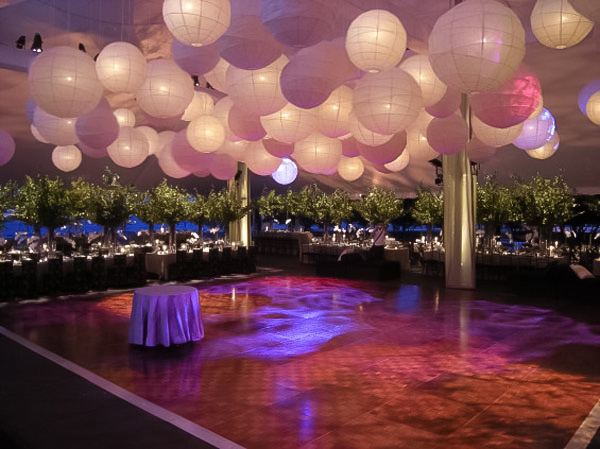 After lanterns, lighting was next on my list, especially for the evening. So we’re going to have a gobo light which will project turquoise hearts up onto one of the big white walls, some uplighters in orange and turquoise to wash the rest of the room with colour and some pinspot lighting directly onto the centre of the tables to light up my flower balls! And lots of tealights. 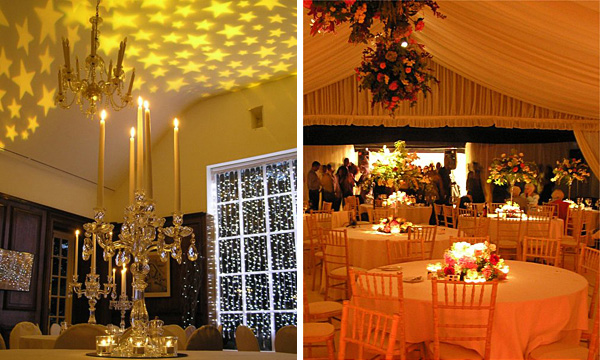 Pinspots shine into the centre of tables to light up the flowers. The darker it gets, the more effective it looks! Our Gobo projection will be like this but with turquoise hearts. We’ve also hired in some chill-out furniture to break up the round banqueting tables a bit. Hopefully it will add another dimension and should be especially popular with my dance friends as we’re placing these right next to the dance floor! 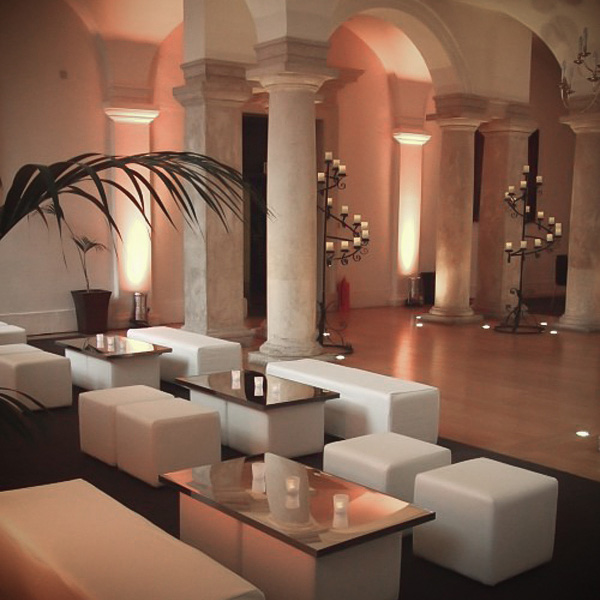 It bothers me tremendously that I won’t be there on the morning of the wedding to see everything set up and make sure that I’m happy with it (spot the Type A personality!), so I’ve been drawing furiously to try and get my ideas out onto paper. It’s not perfect but it’s enough to get a feel for how it will look:

For the ceremony room, we’re keeping it simple with chair covers, an aisle runner and some giant turquoise/teal helium balloons. I have a variety of other ideas too which are a bit more DIY and in their infancy at the moment but include 3D polystyrene hearts, some letters and some foam. Whether any of them come together or not is another matter!! I also experimented with Fimo last weekend while my son was playing with it. I made some marbled hearts and stamped them with “R S” (our initials!) and I may tie them round napkins … I’m not sure yet. I think I just like playing around with the arty things actually! 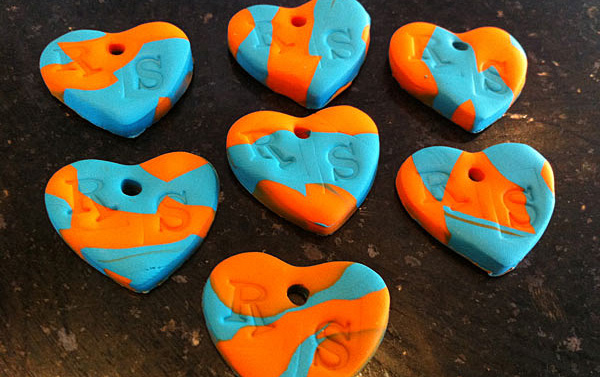 Because we have use of the whole venue, we can also utilise the ‘cafe corridor’ as a quieter seating area – here we’re just having simple table cloths and an unusual centrepiece (it’s a surprise so you’ll have to wait and see!) on each table.

We’ll also have a photobooth area out here – my Dad’s Christmas project, although he doesn’t know it yet (!), is to build an MDF hinged photobooth thing that I’ve sketched out and then I can paint it one weekend before the wedding. Hopefully it will look something like this:

I have to admit to having a secret weapon in all of this though (!) – Rachie from achichiaffair, one of the other Contemporary Cool Real Bride entrants and who has blogged on RMW several times about venue decor (baby shower, hen nights etc) has very kindly agreed to be my ‘On-The-Day’ co-ordinator. I had met with a few other co-ordinators but it didn’t feel like anyone really understood the contemporary angle I wanted, so one night over a bottle of wine, Rog (having heard me speak about Rachie and her RMW blogs) said “Why don’t you ask Rachie if she would consider doing it – at least you’d know that she understands the ‘contemporary’ brief as her wedding is also contemporary?”. (Why do men always cut to the chase on issues?!)

So after a tentative email from me, and an affirmative answer from Rachie, we messaged back and forth on Facebook and then recently met at a pub and chatted like we’d known each other for years! It certainly makes me feel a lot better knowing that Rachie will take my ideas, drawings etc and wave her magic wand to make it all happen and if it doesn’t work exactly how I’ve planned it then she’s on hand to sort it all out in a contemporary way. Woo Hoo! It’s not just about decor though, Rachie has also offered to sort out music, move flowers between ceremony and reception rooms, become MC, man the guest book area, pay suppliers on the day etc etc. So if you’re thinking about a wedding co-ordinator, definitely have a chat with Rachie! 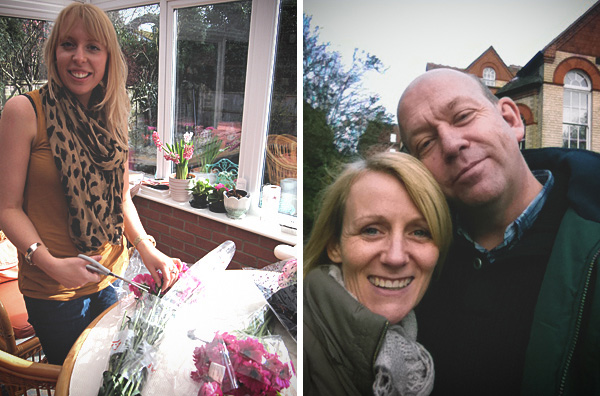 Like Amanda last week (DIY Bride), we’re also getting married on the 14th April, and have also given notice of our intent to marry this week. Because it’s a second marriage for both of us, this has not been an easy process – in fact we’ve been trying to give notice since June!! It doesn’t help that we both had lost our divorce certificates and so have had to apply to the courts for a certified copy. Then once we’d got those, the registrar informed me that because I’d changed my name by deed poll back to my maiden name before my divorce was finalised, they would need to see that too (even though I was legally entitled to use my maiden name after the divorce was finalised!). And yes you’ve guessed it – I’d lost that document too! Getting a copy of your deed poll is nigh on impossible unless you paid lots of money to have it archived (I didn’t) and I’ve ended up having to apply for a new one with a special clause in it saying that I am verifying I have used my maiden name since 1998! So the moral of the story is, put all your important documents in a box with a lock on it and don’t ever lose them because they’re difficult and expensive to replace!!

Is anyone else having a wedding website? I’ve been working on ours this month as there is quite a lot I’d like to tell people that just won’t fit on the invites & information cards so it seemed like a good idea to get one. I’d love to be a whizz bang web designer and know how to create my own website but sadly I’m not, so the next best option was to use one of the many template sites available. We chose www.gettingmarried.co.uk as they were free and I’ve tried to use similar colours and styling within the template options to what we’re having for the wedding stationery and decor so that there is some continuity. This is our final design – www.rogandshirley.gettingmarried.co.uk – feel free to leave us a comment in the ‘Have Your Say’ section if you have any good marriage advice!

Have a lovely Christmas everyone! I’ll be back in the New Year with photos of all our stationery which hopefully will be printed before Christmas ☺
Shirley x

Adam likes Pina Coladas and getting caught in the rain.
Tags:Rock My Wedding Real Brides

30 thoughts on “What Shirley Did… Decor Decisions.”