We got engaged 11 months ago and I officially get married in 3 months and 2 days. I can’t actually believe where the time has gone. Suddenly it all feels very *real* and like there really isn’t much time left to get the rather long list of remaining jobs done. Panic!

Stationery was one area that we were determined not to spend very much money on – mostly on the basis that it all gets thrown away after the day. Shortly after we were engaged, I rushed off and ordered some charcoal grey & green invites from VistaPrint. I have to say they were very efficient, nice quality and extremely good value so if this is an area you don’t want to spend much on, then Vistaprint are definitely worth a look. However, I then changed my mind about the colour scheme and so they all went in the bin – not quite the cheap option I was aiming for! I then trawled google images to find something clean cut and contemporary in turquoise or orange that met my new set of criteria – not as easy as I thought it would be.

Everything was flowery or swirly or had images that just weren’t me. The typographical ones that I loved were seriously expensive. I looked at doing it myself but I’m not gifted in the graphical design capacity so that wasn’t a viable option either. Then one day I was idly browsing Etsy trying to work out what all the fuss was about (I was not sold on Etsy in the beginning!) and I found a design I liked but in the wrong colours. 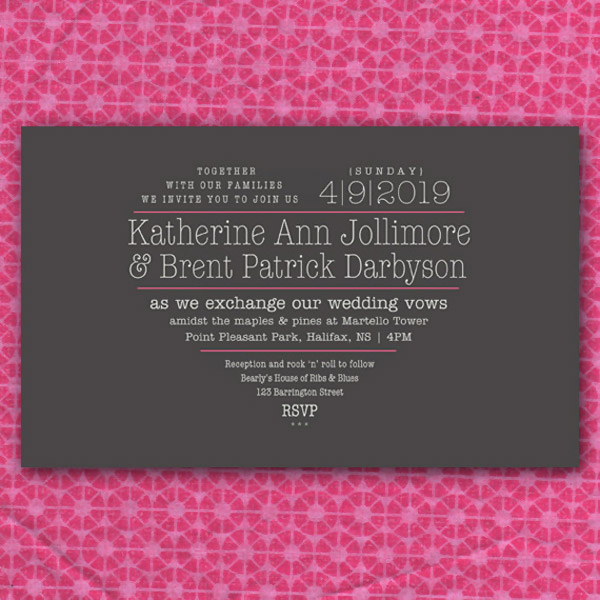 I thought it was worth asking so emailed the seller Amy Adams to see if she could do this design in our colours, and also whether she had a suite of stationery to match the invites. I got the nicest email back from her saying that she would be delighted to design the invites in our colours, and while she didn’t have a range of matching stationery she would be thrilled to design whatever we wanted. Now that’s what I call service! I almost cried at how nice she was and how excited she was about *my* wedding!

We agreed on 12 stationery items ranging from day & evening invites, to menus, order of service programs to table plans and everything in between. *Nothing* has been too much trouble for Amy and she has emailed me mood boards, design options & ideas and endless revisions of each item. She has also put up with me emailing her random images I’ve seen online with notes saying ‘can we do this?!’ like a small excited child! Every email I’ve had from her has been chatty, interested, and striving to produce exactly what I want. If she didn’t live in Canada then I’d pop round and give her a massive hug because she’s been so brilliant and I really can’t recommend her highly enough.

We got the first part of our stationery order delivered this week after a bit of a disaster with the original printer, who basically just didn’t return our calls! In the end, we had to ditch him and find another printer shortly before Christmas. I thought that would be quite easy but no-one wanted to take on a small print run so we ended up using the husband of someone Rog used to work with who happens to work for a printing company and who got it all done as a favour for us. Anyway, it all arrived finally and looks rather gorgeous. It’s fantastic to see the designs that Amy worked so hard to produce actually in the flesh: 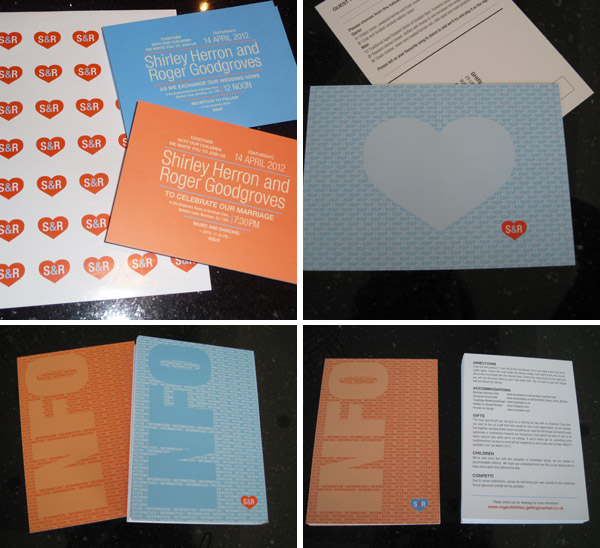 At first our venue wouldn’t let us have confetti but after some negotiation, they agreed we could have biodegradable colour-fast confetti. It’s surprisingly difficult to find biodegradable confetti but I managed to find some in the end from good old eBay from a seller called The Wedding Web Store. They produced me some biodegradable heart shaped confetti in turquoise and orange and were really patient answering all my questions. I spent ages last weekend stuffing it all into 50 little tins that I found on eBay too (though they’re originally from Confetti) and then put one of the round stickers on each lid. The heart logo reappears on most of our stationery items, and is a recurring theme in many of our decorations. 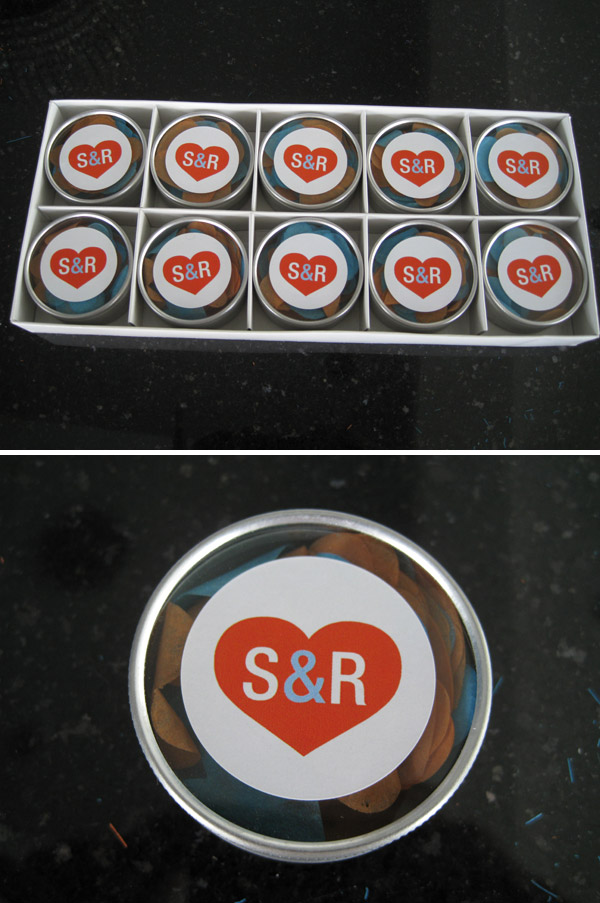 We’ve finally filled in our official form and sent it off to the Registrar with all the wording, readings and music we want included in the ceremony. We’ve also written our own vows. I’ve found sorting out the ceremony details one of the most difficult and stressful parts of planning a wedding so far. We spent ages looking at the lyrics to songs to make sure that they didn’t have religious references and then the registrar never even checked them. They rang and said it was all fine the very next day after we emailed it, and when I queried the music they said that so long as we hadn’t chosen obvious hymns like Jersusalem then they were all fine! Trying to narrow down readings, which have the sentiment and meaning you like, and especially working out what to write in our vows has been difficult and taken a long long time.

Believe it or not, my wedding dress was an item I was convinced I didn’t need to spend money on. My mum made my previous dress for a grand total of £125 using silk from a posh department store in Edinburgh, and while I wanted a shop made dress this time, I was sure it didn’t have to cost much. I didn’t really know what style I wanted, so I decided to head off to Berkshire Brides, a second hand wedding dress place in Reading with my friend for a trying on session. I tried on about 10 dresses in total, and loved the first one. I was debating whether or not to buy that dress when the assistant pulled out another dress and said “you could try this one if you like”. 5 minutes later, I’m standing in the dress, practically in tears because it’s just so gorgeous. Cue HUGE a dilemma because I hadn’t actually come out with the intention of actually buying a dress, I just wanted to try some on to get an idea of what suited me. The downside of buying second hand is that if you love it, you don’t have time to go away and think about it as someone else could come along, love the same dress and buy it before you go back. The upside is that they are significantly cheaper than buying new. In the end, I decided to buy the dress as it was about 40% of the original ‘new’ price and Berkshire Brides will take it back after our wedding and sell it on for me. I get 60% of whatever they sell it for, which justifies spending a lot more on a dress than I’d intended and makes it a reasonable overall price.

Dance is a huge part of my life and many of our guests are dancers, so the thought of not being able to dance in my big dress was seriously stressing me out. I asked the seamstress to make the dress somehow hook up so that I could dance in the evening, but it just wasn’t possible. So, after much soul searching, I decided to get a second (short) dress that I can dance in. I am officially a 2 dress bride woo hoo! The second dress is not a proper wedding dress but rather a very pretty dress from Oasis, and I plan on wearing it again (possible after dyeing it a different colour) after the wedding so hopefully that justifies buying another dress.

I have a question for you though – I plan on wearing my big dress for the first hour or so of the evening party so that everyone gets to see it and I’ll do our first dance in it. Then I’ll change into the shorter dress for some serious dancing. But, do you think it would be weird to change back into my big dress to make our exit at the end of the night??? I’m worried I won’t feel like the bride leaving in a short dress and I want to sort of sweep into our hotel for the night looking properly bridal (don’t laugh!) – what do you think? Would it be bonkers to change twice?

The girls dresses have been easier – my daughter is a light red head and so that narrows the colour choices significantly. Coral, peach and orange were all out! So we looked for turquoise or navy dresses. I wanted them to have a dress that they might wear again, and so we hit the high street. Fortunately there seem to have been loads of turquoise dresses in the shops this year, so after considering ordering a couple for home delivery, the girls chose the first dress here – a rather lovely asymmetrical number from Oasis costing a bargain £60. 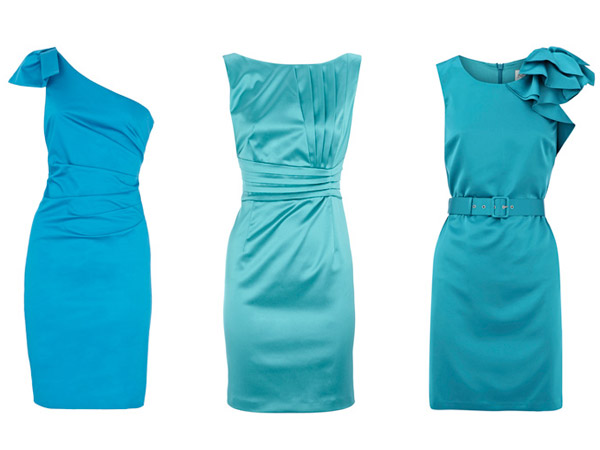 Oh boy, shoes ….. I could probably have about 10 pairs of wedding shoes as I keep seeing really lovely ones! Cream ones, peach ones, gold ones, bright orange and turquoise ones – they’re all so pretty! 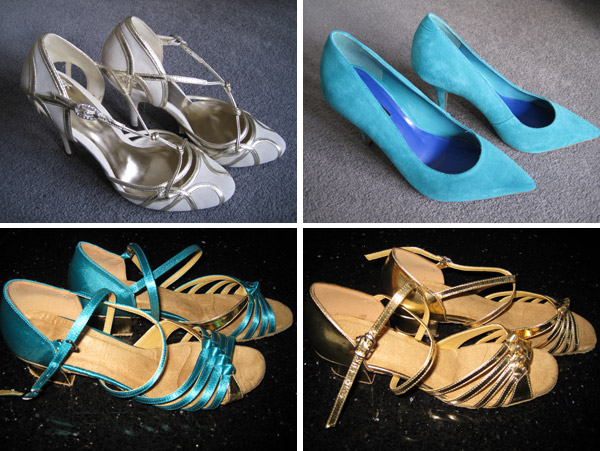 The ones I’ve narrowed it down to are these Monsoon ones (top left), bought in the sale for £65:
Although I may swap to this turquoise pair (top right) I got in the River Island sale for £20:

And in the evening, I had a pair of gold dance shoes (bottom left) made from a place in China that I use for my competition shoes – basically they will make practically any colour, heel size, strap design etc that you like. You order it all online and about 4 weeks later your shoes arrive! For a bargain £20 including shipping from China, these beauties arrived just before Christmas and I’m now on a mission to break them in before the wedding. Oh and the pretty turquoise and gold ones (bottom right) just sort of jumped into my online basket just before I checked out – who was I to say no!? 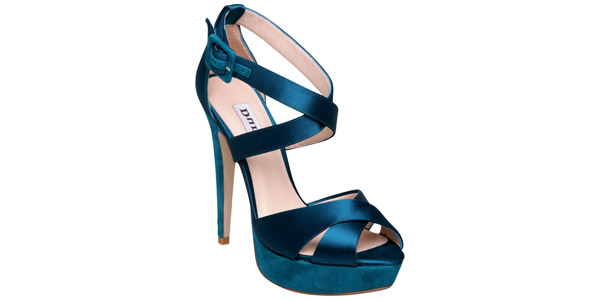 The girls chose these ones from Dune, also in the sale, but when they arrived, they were much more green than in the picture so they’re going back, and the hunt for their shoes is back on.

Like Alex, we still have a long list of things to do including sorting out what the boys are going to wear, what the hell I do with my hair which I hate, the rest of the stationery order, iPod playlists and a zillion and one small details which seem to take more time than the big things.

We also had our engagement photo shoot over the Christmas holidays so I’ll be sharing those pictures with you all in February along with the story of why we had to do it twice!

24 thoughts on “What Shirley Did… Stationery, Shoes And Dresses.”