In exactly 9 days I’ll be a Mrs! I can’t believe how quickly the last 3 months have gone and despite my best efforts to get everything completed by the end of March, I still have quite a few things to sort out / buy / do / finish. Some of this is because the exhaustion has set in and jobs that will probably only take me an hour to do have lost their appeal and so stay in whatever box / drawer they have been relegated to. I can’t help but think that although it would be nice to finish everything I planned to, that if the big day was tomorrow then I also wouldn’t lose any sleep over anything that isn’t already finished. And I think that’s the way you have to think about it really, otherwise you (well me certainly) would go nuts trying to finish everything.

That said, it has been an insanely busy month with multiple dentist visits (still having huge problems trying to get pain free before the wedding – as you read this post, I will be laying in the dentist chair again!), end of term activities with the kids as well as the usual day to day life of cooking, washing, ironing etc and that’s before I’ve touched the wedding stuff. Real Bride Alex said that not having to do the wedding planning since her big day in Feb has been like a massive weight lifted off her shoulders and I must admit that I’m looking forward to having some spare time and my life back again!

On the wedding front, I have had 2 hen-do activities this month. The first was for all my dance friends and we met up at Hammersmith Town Hall for a freestyle evening which involved 5 hours of dancing and seriously sore feet. It was a great night though, full of laughter, friends and fun. Unfortunately I don’t have any photo’s of the night as I was dancing too much 🙂

The second was a spa day for me and my best mate, Liz. I found a great deal on Groupon and so off to Bannatynes Spa we went. We spent the day being pampered with back & shoulder massages, facials and manicures as well as eating a lot in the cafe and lounging in the Jacuzzi. It was just what we both needed.

Rog had an impromptu stag night after going to the Teenage Cancer Trust gig at the Royal Albert Hall with some friends, who then dragged him out for drinks afterwards. Fortunately there was no naked tying to lampposts but he was feeling quite delicate the next day. His ‘proper’ stag do was a day out with his kids – not the conventional stag do but it was what he wanted to do and as his kids are away at Uni now, he doesn’t see them as much as he would like, so it was special to spend a day with them doing fun stuff. They did some Segway racing in Bracknell forest followed by lunch and then a climb through the trees courtesy of Go Ape. 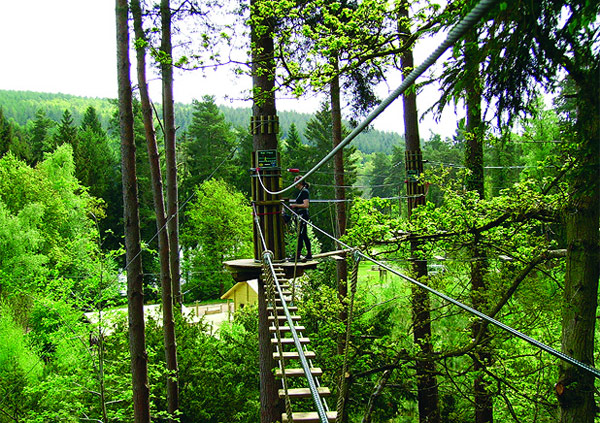 I’ve been for my final dress fittings and it’s amazing to try the dress on without having to hitch it up! I can’t wait to wear it properly and see it put together with all the accessories. Speaking of accessories, my headpiece arrived this month and its gorgeous!! I fell in love with a seed pearl headpiece by Victoria Allinson at the National Wedding Show last September. Victoria and her mum Jayne, who helps her run the shop, couldn’t be a nicer couple of ladies to deal with. I tried on the headpiece with my dress, and make a few changes which Victoria was more than happy to do. She also made me a bespoke necklace to match the headpiece which is perfect and one of the few things that I will be keeping after the big day. 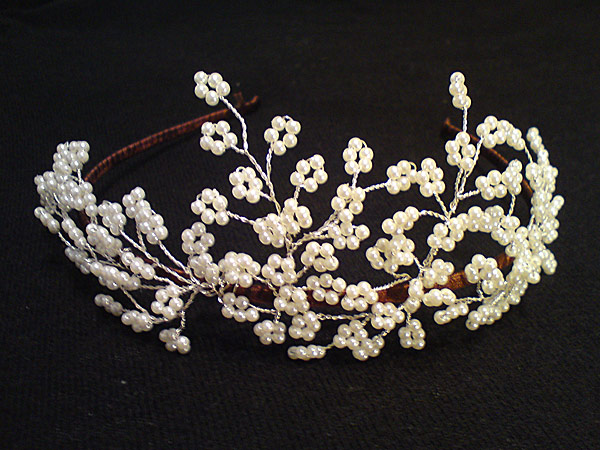 My actual finished headpiece has lighter ribbon to match my hair and some crystals as well as the seed pearls to make it sparkle a little bit in the light.

Now that I had the headpiece, I could go for a hair trial. I have to say, I was pretty disappointed with the first trial. I don’t like my hair much at the best of times, but I was hoping that the hairdresser could come up with something a bit more exciting than some random wavy curls and a bit of backcombing. 3 hours after leaving the salon, it looked like I’d been dragged through a hedge backwards and was a total mess. 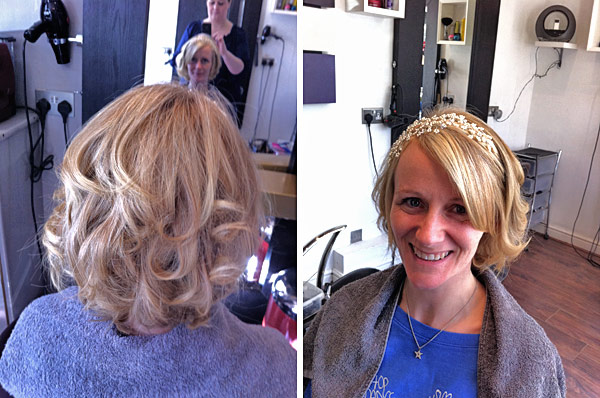 I went back a second time, armed with a picture of the gorgeous Amanda Holden. The trial this time was a lot better. The style was more similar to my every day style which I realised is actually a good thing because I felt like me! I’m getting my hair cut and coloured over Easter weekend and she’s going to style it again with my headpiece so that I can be 100% comfortable with the finished look so fingers crossed. I had considered extensions or a hair piece but Rog hates the feel of proper extensions and I was worried about a hair piece flying across the room like an escaped rat as I danced, so in the end I just have had to work with the hair that I have.

Makeup trials were another thing on my list – I love MAC makeup and have a lot of it in my cosmetic bag, so I was keen to have a bridal trial with them. Again, I went armed with my trusty picture of Amanda Holden (couldn’t someone just wave a magic wand and make me actually look like her please?!) and I had high hopes of achieving this makeup look. It looked OK in the shop but Rog took pictures of me when I got home so I could see how it translated to camera and it was just awful. I daredn’t share the pics on here because they were so bad but think orange tide mark, weird ginger eyebrows (nothing against ginger hair but I have blonde hair!), lips so nude that I look somewhat dead … the list goes on. Luckily for me, my friends wife is a freelance makeup artist and she offered to help me out. I had another trial with her and it was amazing. I almost cried when I looked in the mirror because she made me look so fresh and pretty but without looking overdone. Pip is such a star that she’s also going to do my bridesmaids and best friend’s makeup before dashing down to our venue to take her seat (she’s also a guest!).

One thing we sorted out a while ago but I’ve not told you about is our honeymoon. I’m soooo excited! In fact, the thought of the honeymoon is what is keeping me going at the moment. Originally we wanted to go to Los Cabos (posh side of Mexico underneath LA where all the celebs go) for a week or so, then onto Las Vegas for a few days before flying home from there. However, when we looked into it, we found out that you can’t fly direct to Cabos, nor direct from Cabos to Vegas and this meant that we would basically be travelling for three 24 hour periods during our 10 day honeymoon. Uhhhh no thank you. We didn’t have a clue where else to go and didn’t really want the typical desert island honeymoon holiday as we enjoy doing things as much as we like sunbathing and get bored easily. Then my cousin recommended Donna Waddington at Travel Counsellors. She’s the daughter in law of my cousins godfather or something like that … anyway, I figured I have nothing to lose although we NEVER book through agents as Rog is good at finding cheaper stuff himself. I have to say, Donna has been worth her weight in gold. Not only did she patiently listen to my list of wants (and don’t wants) but she also suggested many many options until we came up with one that seemed to fit the bill. We settled on Mauritius which I had initially ruled out because it’s a traditional honeymoon destination, but after some digging around, it seems that there is a good mix of sunbathing and activities to do (if you want to). Donna sourced many hotel options too and we ended up going for Les Pavillions in the south of the island. 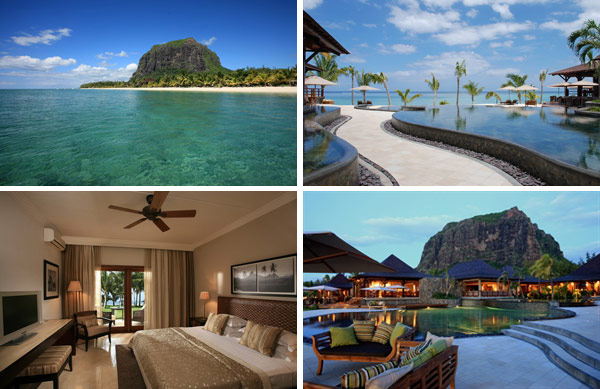 There is tons of stuff I haven’t told you about like ‘I Spy’ games for the kids, a second menu tasting at the venue, a variety of DIY projects, finally sorting out canapés, a post wedding brunch, table plans and name cards, bouquets, suits, thank you presents, rings… The list goes on! You’ll just have to wait until the wedding photo’s are out to see them all!

There is one group of ladies that I couldn’t have got through this whole experience without, and that is the ‘Real Bride’ girls. Since RMW announced the winners of each Real Bride category last June, all the shortlisted girls got chatting a little on email and that led to us setting us the ‘Real Brides Facebook Group’. All but 2 of the girls joined and whether we won our category or not, we have all become friends, each others cheerleaders, shopping assistants and most importantly, sanity sound boards. Almost all of us have found that no matter how good your bridesmaids/best mates are, they quickly get a bit sick of listening to you twaddle on about wedding stuff. No fear of that happening if it’s a group of brides together! We have hunted for bridesmaids dresses / head pieces / shoes, offered each other advice on how to deal with the inevitable (and all too frequent) difficult situations, oohed and ahhed over each others wedding dresses and much much more. So I’d like to say a huge thank you to Jo, Rachel, Emma, Katy, Jade, Laura, Celine, Amy, Rachael, Lisa, Laura, Amanda, Abi, Lianne, Kelly, Lara, Alex and Jenny – you girls ROCK! 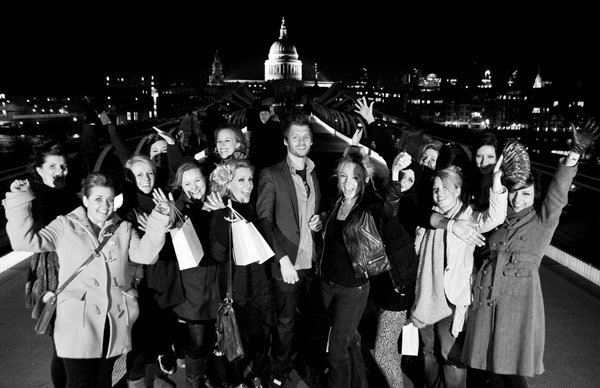 And lastly, a massive thank you to my patient, hard working, willing to try anything husband-to-be. Considering you didn’t even know that I’d entered us into the RMW Real Brides competition until our shortlisted entry went up online (in my defence, I truly didn’t think we’d get shortlisted), and have then lived and breathed a contemporary turquoise and orange wedding and my numerous, sometimes hair brained, ideas ever since – you deserve a medal! Not once have you batted an eyelid when I told you my latest challenge, DIY project, or colour scheme even when it would have been easier (and often cheaper) to have outsourced the task. You’ve been there throughout for me and I honestly don’t think I could have got through the last year without you. 8 days to go!!!

So that’s it girls … I’m signing off from the wedding planning front line and I’ll see you all on the other side with my wedding report.

18 thoughts on “What Shirley Did… The Final Countdown.”