Beyond Rock My Wedding, sometimes Charlotte and I have a pretty monotonous life. It might appear glamorous popping off to London for events, but more often than not it’s late nights alone infront of the computer screen. So more often than not, I’m crying out for some fresh air and recently I have been getting a lot more of it. On my Allotment!

You see, I’m a closet gardener, or really, I’m not even in the closet. I’ve been talking to plants since I followed my Dad around the garden as a little girl; I can never get over the thrill of seeds poking their first shoots through dark soil and watching them grow out of nothing. So as soon as Pete and I bought our house (conveniently with a community allotment at the end of the road) I put my name down for a plot. And waited. For three and a half years! Despite my long term interest in gardening, while I had been growing up, and going to University, the grow-your-own movement had gone wild and allotments were the new cool hang out, or so I like to think!

Finally, last September, we got the call, we could finally have a plot… but it came with a catch. They were looking for people (read: idiots) to take on plots of land from an area of land at the back of the allotments which was being reclaimed. Completely fallow land, which had been a bit of a dumping ground locally. No mean feat. I was so excited I bit their hand off and when we went down to choose our plot this is what we were met with…

It was daunting to say the least… 3.5 x 20 meters of waist high weeds, nettles, brambles and a shed load of rubble underneath it. The top two pictures above were taken right from the middle looking up and down the plot. It’s long and thin and just seemed to go on forever! But we were mightily keen and set to work clearing it. 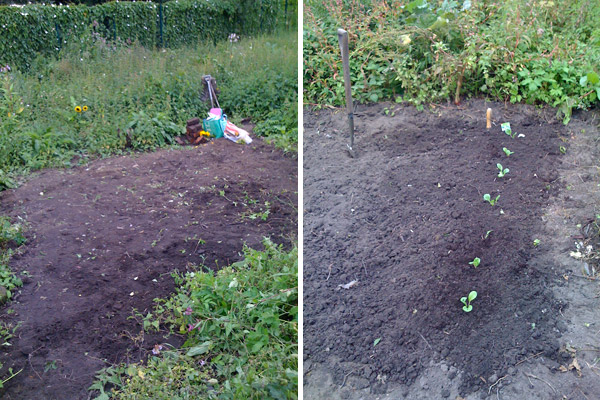 We started right in the middle and worked towards the fences that marked the border between the existing allotment and the reclaimed land and managed to get through half of it before the early winter took hold and we retreated to the comfort of the sofa. Not before I got my first row of plants in though!

Come spring, we were back out in force and so were the weeds unfortunately, but the progress since then has been immense. The plot is sloping and so we have tiered the first 5 meters or so and put in a brick path with all the bricks we dug out from the plot. That and salvaged from skips… I’ve turned into the reclaiming queen and Pete’s been chatting up every house in the area doing building work for extra bricks they would have tossed! 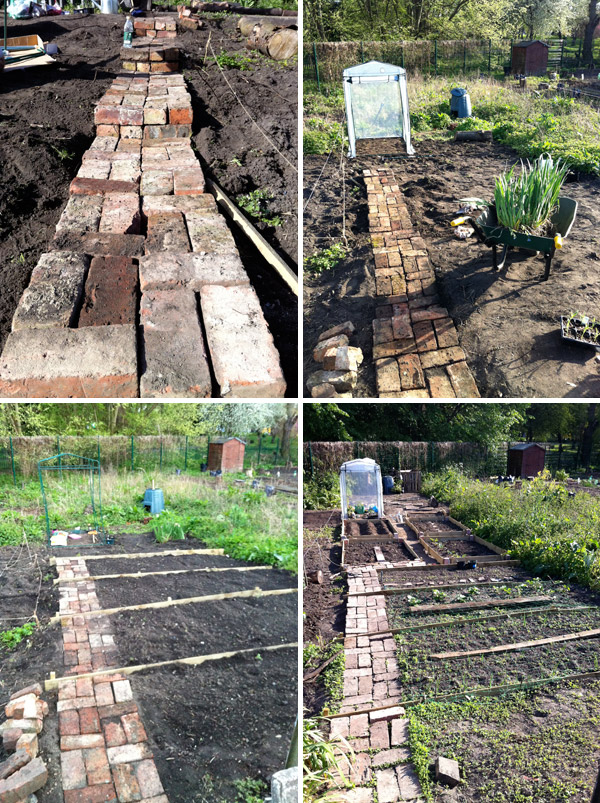 There have been a few mishaps along the way – in the spirit of keeping costs down we opted for a plastic grow house instead of buying a new greenhouse… I’m going to look out for one on freecycle instead. No sooner had we installed it but the winds came and I went down to the plot the next day, only to find it gone without a trace. Convinced it had fallen foul of the local tea leaves I was gutted, until Pete told me to look around, it had probably blown away. And there it was, upside down in a rhubarb patch half way across the allotment! 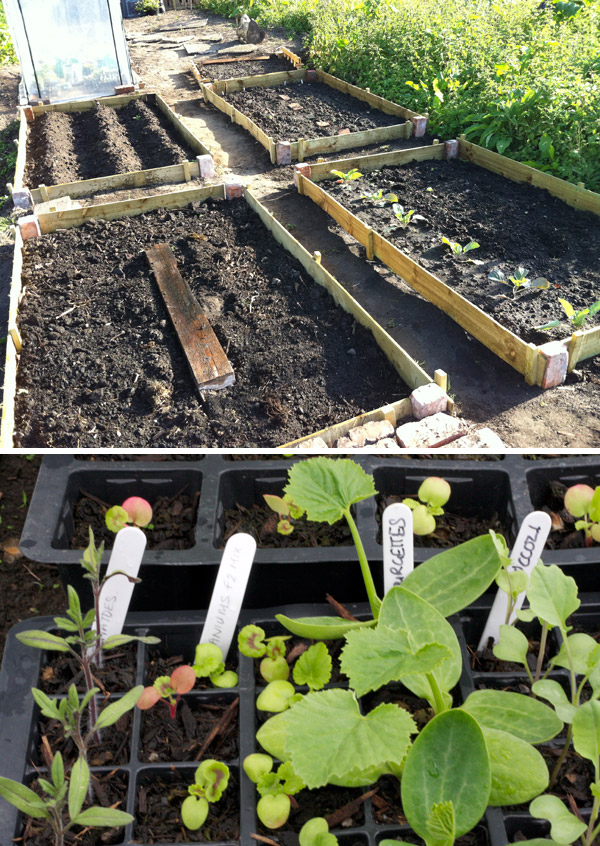 Despite being a gardener I had never grown vegetables before, so it’s been a fascinating learning curve. Weve made four beds for crop rotation. One each for Legumes (peas and beans) Brassicas (Cabbages, broccoli and sprouts,) Roots (parsnips, beets, carrots) and Potatoes. Apparently, rotating them is the best way of self fertilising the land and avoiding pests – remember those lessons we all had at school about the nitrogen in pea roots? And in the re-instated growhouse I’ve been growing seeds of courgettes, tomoatoes, geraniums (to be taken back to the back garden) butternut squash, broad and runner beans, broccoli, cucumber and aubergines.

And we’re not short of advice either. Every other plot holder has been wandering past, offering us cuttings, excess seeds and plants, or even spoils from their plot, all dispensed with tons of tips and tricks, (whether we ask or not!) In fact it’s hard to get anything done! 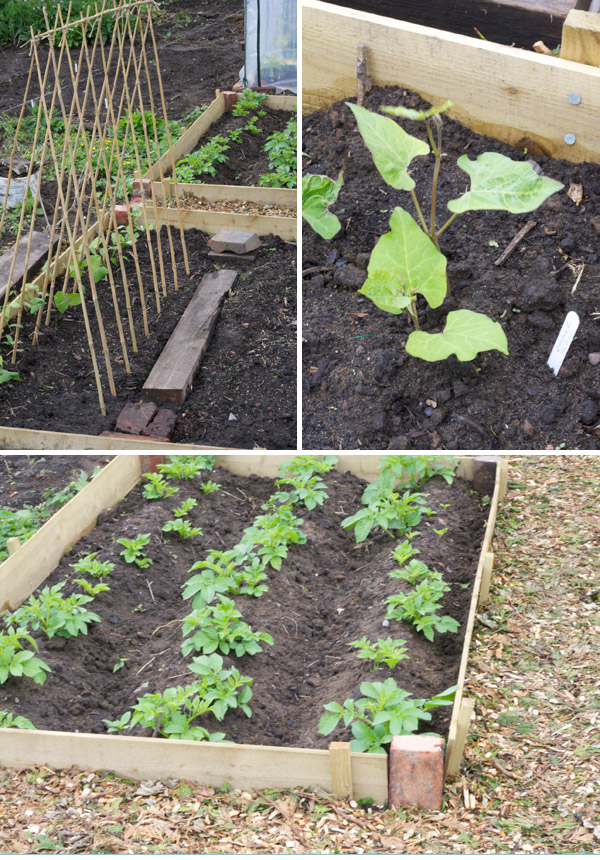 And the best thing about it? The thinking. I get so much time down there just to think. No email, no twitter, computer or phone ringing. Just silence, green and fresh air. The combination of physical work and brain space has been invaluable and I love it. It’s been something that Pete and I can do together, and as a complete beginner it’s amazing watching him get interested in the whole process too. I’ve had to supress a giggle or two as he asks me every day if I have looked at the beans sprouting up. 🙂

Of course, it’s still a work in progress. The whole plot is cleared but we’re still to plant out a lot of the seeds, finish the far end, (I’ve got plans for an orchard, some grass, raspberries and blackberries) and the weeding never ends…

…so as you read this, if you’re wondering where I’ll be, the answer is on the allotment.

Are any of you gardeners? Green fingered or not, balcony, back yard or the lucky ones with gardens… tell me if you’ve any tips for me and what you’ve been doing in the garden, or would like to be…

PS Wish me luck too, the above statement is not technically true… in the morning I’ll be in Manchester city center doing the Manchester 10k (in an embarrasingly slow time). Give me a wave if you see me or drop me a comment below if you’re taking part – Good luck everyone running! 🙂

Becky is at her happiest when dunking a slightly chilled chocolate digestive into a very warm, very milky cup of tea. She also loves her job and pinches herself every day to make sure that she isn’t in a graphic design dreamworld.

19 thoughts on “What the Wife Likes… The Good Life.”