It’s always really nice when the wedding of an RMW reader lands on your desk, especially when you can see little RMW snippets of evidence here and there within the images. In this case it is the actual image makers – Ruth Found Craig Williams Photography through these very pages, and you can see them on The List.

We admired, amongst other things, the colours, the dress, the flowers and the bungalow (!) in part 1 of Ruth & Danny’s big day… And now we have details, family, cake! Dancing and décor. (Check out those chandeliers!)

We decided that we didn’t want to do a cake cutting so a cupcake tower was an ideal choice. I had already bought cakes from Cupcake Occasions and as I knew their cakes taste delicious and they are fantastic at recreating anything that you could possibly want, they were an obvious choice. Through discussing our overall wedding plans and making us some yummy sample cakes together we agreed on a final design made in 4 flavours, Lemon, Carrot, vanilla and Chocolate.

During the ceremony we had a string quartet called La Scala. For walking down the aisle we chose Pachabel Cannon in D which is a beautiful piece of music. Whilst we were signing the register they played Snow Patrol Chasing Cars and for our exit Elbow One Day Like This, both which are lovely songs anyway, but sound even better on strings. They then moved outside and played a selection of modern songs which was great to entertain the guests whilst we enjoyed drinks and canapés on the lawn.

In the evening we had The Monday Music Club who consist of a DJ with a live band on percussion, bass guitar and saxophone and they play a mix of soulful house music.  They often play in my favourite night spot and we have had many enjoyable nights out dancing the night away. It was a bit of a risk going for something different from the typical crowd pleasing wedding music but we really didn’t want to have all that as it’s just not us! I’m pleased that I stuck to my guns as I think that their vibe suited our wedding really well.

We had difficulty choosing a first dance song as there wasn’t anything that stood out as being our song. So I tuned to my friend Google to help come up with some ideas. When we came across The Style Council ‘You’re the best thing’ we both really liked it as it is an oldie but a goodie! It’s a bit more happy and upbeat than other typical first dance songs whilst the lyrics are romantic and meaningful. 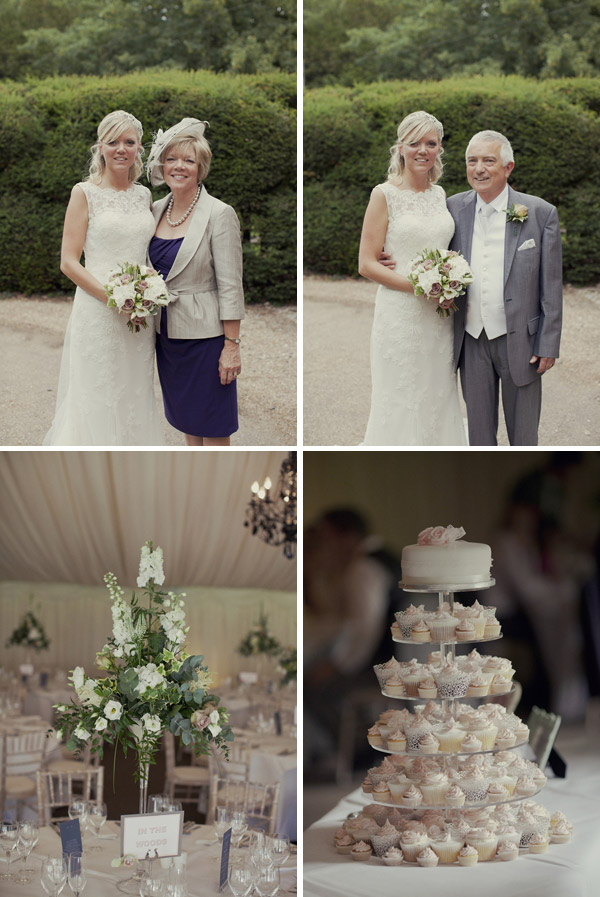 Favours were another thing that I agonised over for a long time. I think it’s nice to give guests a memento but I just couldn’t find anything we liked. Then we came across the photobooth idea which meant that we had some fun entertainment for our guests and it also allowed them to print as many copies of their photos to take home for themselves and another copy was stuck in a guest book for them to write a message next to. I wrote a poem and had it printed on the back of the menus to ask people to make sure that they used the pohotobooth as a favour for us and a favour for them. It was a massive hit and there was a steady queue all night and we have a fabulous guest book as a result as well as over 300 pictures on a CD to keep.

We replaced the existing chairs and dance floor with some hired whitewash chiavari chairs and a black and white dance floor which all added to the beauty of the marquee. The florist Calla’s Floral Designs arranged candles in hurricane vases which lined the stairs to the ceremony room and were later moved to line the path to the marquee which looked wonderful.  I also spent months making and collecting various accessories which were used around the venue including a pamper basket for the lady’s toilets which was very popular with the girls!

The table plan I made using a birdcage frame which tied in with our invitations and name tags on the chair and we used a vintage suitcase for the cards. The table names were all arenas and events at Latitude festival which Danny and I go to every year and also went to this year after our honeymoon… or for honeymoon number 2 as I liked to call it.  With names like ‘In the woods’ and ‘Guilty pleasures’ though they certainly kept our guests guessing!

I feel our wedding was unique as we made an effort to do things the way that we wanted, breaking out of the typical wedding mould whilst maintaining the class and romance of a traditional wedding.

My advice for brides would be…

What about that for a cracking bit of D.I.Y for the table plan… a true RMW girl is our Ruth!

I think the photobooth concept is a really neat answer to the wedding favours quandry… it engages your guests in a fun activity, it gives them a keepsake and it adds to the memories of the day for you as well… It’s got more strings to its bow than a kinder suprise. Now, if only someone out there were to somehow combine a photobooth with chocolate…

Right, I’m off down the patents office.