Hannah and Henry's beautiful wedding day is like a woodland fairy mermaid hybrid party with a touch of Moroccan decor thrown in for good measure. And FYI - all of those things are totally amazing, even more so when combined. East Quay is one of my favourite venues because not only is it near the sea, but the space is the perfect blend of industrial cool and cosy and inviting. Green Antlers Photography were there to capture every last detail and there are SO many for you to pour over. Not only that, but the couple were treated to the most beautiful light at dusk which meant their couple portraits on the beach are simply stunning. Enjoy lovelies, and look out for the sweet treats - there's a Krispy Kreme display that'll have you both drooling and swooning in equal measure.

Hannah The Bride:   I wanted something quite simple with a boho feel to it that would suit a beach wedding. I didn’t realise that this would be so tricky in the UK with a relatively small budget! I searched the internet an came across Heart Aflutter Bridal in London and they had a Claire La Faye trunk show. It was very cliché but when I tried on my dress I knew it was the one. I’m quite small and all the other dresses I had tried had drowned me but this one was suited my shape perfectly. As my dress was simple I wanted my shoes to be too so opted for nude block heeled sandals from Office. I wore a gold  dogeared karma necklace and my engagement ring. I had my engagement ring designed by Rachel Boston – grey hexagon diamond, and she made my wedding band too.

Even though I am small my husband Henry is incredibly tall (6ft 8) so he was a little limited when choosing his suit. In the end he found a navy suit in TM Lewin and had it tailored into the slim cut he wanted. Again shoes were a problem because of his size but he found a German company called Shoe Passion which sells classic, fashionable shoes in big sizes!

With the venue we were again on a relatively small budget and we knew we didn’t want anything too ‘fancy’ and instead wanted a relaxed boho feel. We both love to be by the sea and so when we found East Quay Venue in Whitstable we knew it was perfect. We loved the quirky and boho feel to it and loved the fact it is directly on the beach. We also liked the way there are separate spaces for the ceremony, wedding breakfast and dance floor without having to move things around. The food option of fish and chips was great too!

The decor was all done by Henry’s sister Olivia (apart from the lights provided from florist) She was also one of my bridesmaids. She is incredibly creative and has amazing taste. She kept with the idea of boho and started sourcing loads of accessories including the amazing pink velvet sofas in the seating area, cushions and Moroccan poofs, Persian rugs, french doors, dressers, single stem vases for table numbers and countless plants. She made us welcome signs, a guestbook sign, table plans, table cloths, and and wrote everyone’s name on a clam shell to mark their place. She has just launched her own wedding stylist business called The Collect Co.

I absolutely loved my flowers! I had sent my florist Jane at Graham Greener pictures of the sort of thing I wanted but never imagined they would be so perfect! I know very little about flowers so had to put my trust in Jane and it paid off! The main thing I said I wanted was lots of greenery and for it all to look at bit wild! With all the greenery I mainly had white flowers, but also had some touches of dark burgundy. I wore a flower crown with mainly greenery and tiny wax flowers and Jane had even managed to find a variety that were white with a touch of burgundy! I had greenery running down all of the tables, up the banisters, around the window, on the ceiling – basically everywhere! My bridesmaids had smaller versions of my bouquet as well as flowers in their hair.

I think I found the bridesmaids dresses the most difficult thing. I wanted something that suited the wedding (nice and simple) but also wanted something I knew my bridesmaids would like even though they all have completely different taste. The underneath of my dress was gold and so I felt that limited me with colour choice too. In the end (after ordering and sending back a least 20 different dresses) I went with white midi Bardot dresses from River Island which suited all of the girls and went well with the overall look of the day. The groomsmen wore matching navy trousers, grey waistcoats and burgundy ties – all from ASOS.

I knew I wanted some sort of reading in the ceremony but everything we read felt too ‘cheesy’ and didn’t really feel like us. I’m from a very musical family and so we decided to ask my Dad if he would sing/play. He sang Jake Bugg 'Simple As This' (one of our favourite songs) and it was perfect. I was so nervous walking down the aisle but he sang before we said our vows and gave me a chance to focus on something else and compose myself. I walked down the isle to the Kooks Seaside (quite fitting) and we walked away to Oasis Songbird.

As the guests arrived Henry’s cousins Josh and Jed played their guitars and sang and variety of acoustic cover songs. After the wedding breakfast my Dad and Grandad played and sang. They have always played traditional Irish music together and so it was a big part of my childhood that I wanted at the wedding – the guests really seemed to enjoy it too! In the evening we had The Brightside Band who were completely amazing and got everyone dancing.

We opted for fish and chips provided by the East Quay Venue which is served in a box with wooden cutlery. Everyone commented on how good the food was! In the evening we provided our own buffet. We looked at wedding cakes but they just seemed so expensive for what you get. Instead we opted for a Krispy Kreme tower and a homemade dessert table (the majority of which were made by my Mum!) We provided our own canapés in the end too to help keep costs down.

Our photographer was Sam from Green Antlers Photography and he was amazing. We were both so worried about having our photos taken but he made us feel completely relaxed and we actually quite enjoyed it in the end. So many of our guests commented on how nice he was too. Again I did a lot of research on the internet before deciding who we wanted to go with because we didn’t want your typical ‘cheesy’ wedding photos. We wanted our photos to look relaxed and like pieces of art. We also love the views that our venue provided so wanted a photographer that would use this in their work. After looking at Green Antlers it was clear how much they take nature into account and the way they capture light is amazing. We were blessed on the day with a beautiful sunset over the sea too which Sam captured perfectly.

My advice would be to get family involved where you can! We are lucky to have very talented family members and I think having them involved made the day extra special. 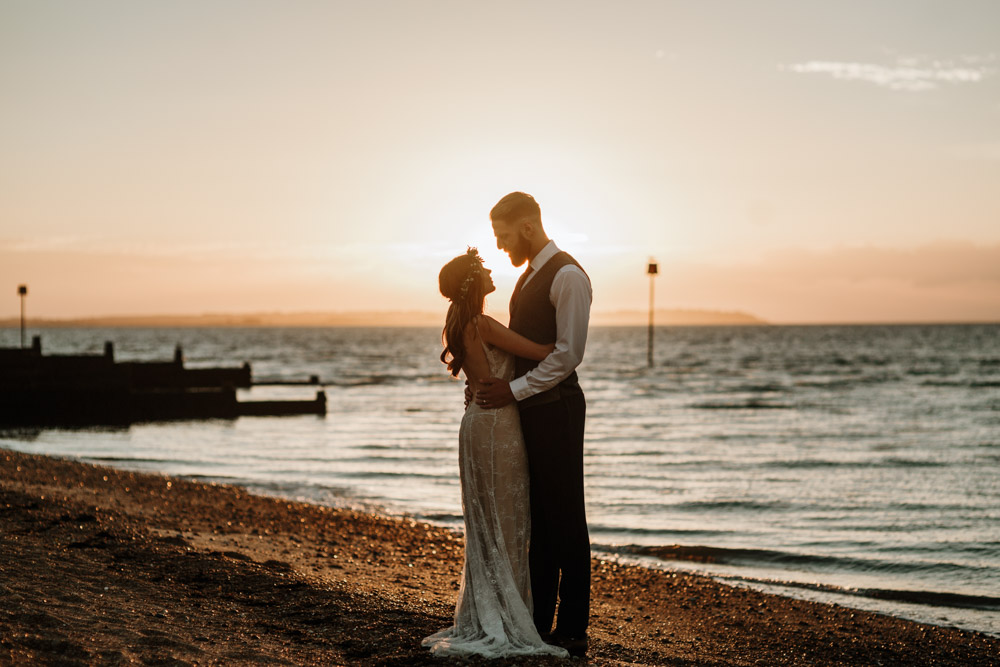