If you haven't clocked them already, just wait until you see the immense hanging hops and Edison lights in the marquee reception. Seriously jaw dropping stuff. I can't even begin to imagine the hours of work that must have gone into creating such a striking feature, so serious hats off to Emily Wisher's floristry design. Sophie & Tom's wedding planner Simon Bond Events also continued to make their visions come true by honouring their love of Greece and creating the ultimate Greek taverna in their glass Marquee reception. There were cosy hangouts, a gin bar and don't even get me started on the food. Nom nom. Everybody looks super relax and beautiful, with the delights of this Scottish wedding captured perfectly by Lucy Davenport Photography.

Sophie the Bride: Growing up I had always imagined myself getting married in my favourite place, a Greek island called Skiathos, where I spent every childhood summer and where Tom proposed to me last year. However, I am also quite traditional, we both love being in the countryside and as my parents live next door to a beautiful church in Shropshire, we decided it was a no brainer to get married there and have the reception in their garden. We then set out to achieve the best of both worlds by bringing Greece to The Old Vicarage!

My aim was for it to feel like a Midsummer Night’s Dream, ethereal, rustic, floral and with Greek touches throughout. Enter Simon Bond Events and our event stylist Gemma Bond. They created exactly what we wanted, and more! The garden was filled with lanterns, fairy lighting and potted plants. Simon then brought the outside in by building a wedding breakfast marquee with clear walls and ceiling. This allowed for a spectacular view during the meal, not least the September sunset. It was constructed right up against the wall of the house, so one side of the marquee was beautiful wisteria. Gemma suggested long wooden trestle tables, adorned with tea lights and flowers but without table cloths. It felt like an upscale Greek taverna, especially as each table was named after a Skiathos beach. We had hanging hops and light bulbs run the length of the tables from above. Olive trees stood in each corner. It felt absolutely magical. Along a tunnel from there was the dancing marquee. It felt like we were in a nightclub and a cool contrast to the other space. It is in here that Gorilla Events set up their awesome cocktail bar. Outside, what had been our champagne reception area was now a gin bar and ‘chill out zone’, complete with rugs, sofas, fire pits, animal statues and many more eclectic items. I really liked the idea of having different scenes about the garden. We had bespoke wooden signs made that, once in place, made it feel like a mini village.

Our beautiful flowers were arranged by Emily Wisher. Being half-Scottish I knew I wanted thistles to feature and so blue became the colour scheme. It is Tom’s favourite colour too.

The main thing we wanted for our wedding day was it to feel personal. A highlight then was having bagpipers and drummers playing Amazing Grace during the signing of our register, a nod to my Scottish heritage. It was really emotional. They also played and marched us back from the church. We later walked into the wedding breakfast to the zorba, a really fun moment that got everybody going. Our band was called Under the Covers and they were fantastic. A really talented group! My favourite part of the evening was a total surprise though - The Lighthouse Family singing our first dance song, High. Tom and I went on our second date to see him sing in Camden. Tunde doesn’t perform at weddings or parties but made an exception for us. It was the best moment of our lives and we’ll never forget it.

For the canapes and wedding breakfast menu there was never any other contender than Mandi Wilson’s, Goose on the Loose. Her food is not only out-of-this-world delicious but also presented in such a unique and quirky way. We went to her with a rough idea of what we wanted and then let her creativity run wild. She embraced the Greek theme, such as a mezze starter and wrapping artisan bread in Greek newspaper. The first two courses both involved sharing plates which I thought brought the casual taverna feel to life and gets people talking. Her highlight was cooking 191 beef fillets to perfection. Food aside, Mandi also came up with some fab additional touches, such as table plans on sandwich boards which were then worn by the ushers during the champagne reception.

Our cake was made by Jo’s Couture Cakes. She created exactly what we wanted - a neutral, rustic design with olive branches for decoration. There was no cake left the next day, testiment to its flavour!

I always knew I wanted Lucy Davenport to capture our big day and in fact, booking Lucy was the first thing I did after getting engaged. I had seen the photos she’d taken of my sister-in-law’s wedding and was wowed by her work. I hate posing for photographs and loved how Lucy captures natural and amazing moments. I really enjoyed spending time with her on the big day.

It was Tom’s idea to hire a videographer, having come across Will Warr’s awesome portfolio via Facebook. I hadn’t been keen on the traditional videos involving 10 hours of uncut footage but Will’s 15-minute ones were much more fun, edited so cleverly and backed by great music. We set about picking our songs and let Will do the rest! 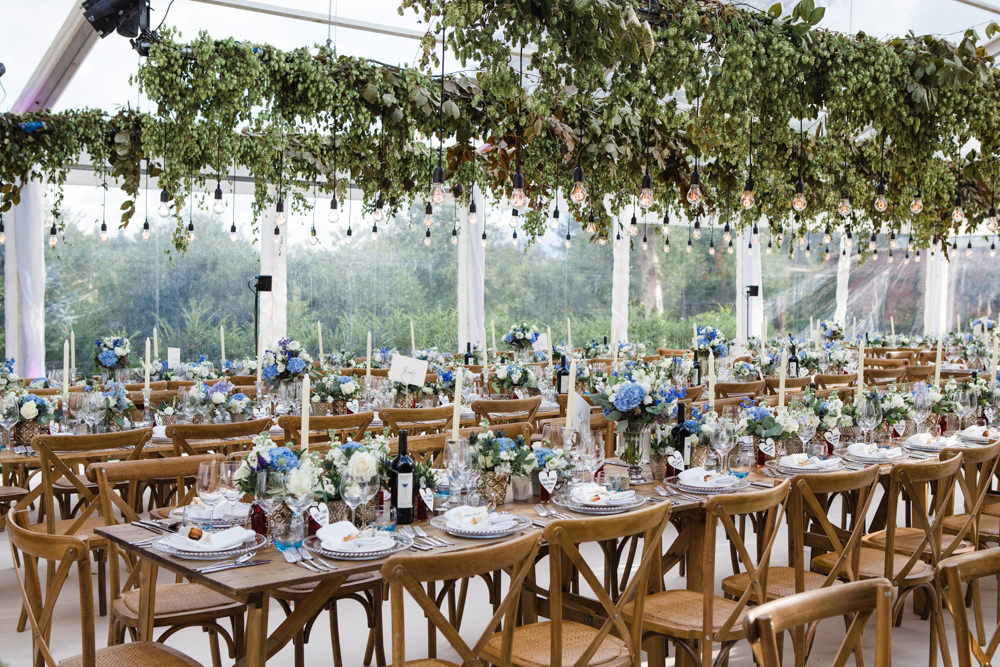 Gemma Bond the Stylist: Sophie and Toms wedding was one event Simon and I had been looking forward to all year. Meeting them at Sophie's family home with Goose on the Loose catering got us all excited. Mandi is a wonderfully imaginative and theatrical character with immense passion for her food and the props she uses to present them. With an undercurrent of Greek revelry running through the day, Simon set about creating and planning a village feel comprising of 3 separate marquees, one undergoing a complete transformation into a Gin den whilst the guests ate their wedding breakfast feast and were non the wiser. The flowers were genius, courtesy of Emily Wisher and her team. She helped to design the steal runners for the hanging foliage above the tables - a van full of hops, I kid you not! The poles were winched into place with Edison filament bulbs hanging randomly over the tables to enhance the intimate feel of dining in a Greek restaurant. 234 vases were filled with flowers to run down all the tables that sat 190 guests. The clear roof marquee was a wonderful touch enabling guests to view the wonderful September dusk. We were all in agreement that the marquee should be lit exclusively with candles. 482 to be precise! it looked incredible. The combined team of Simon Bond Events, Gemma Bond Styling, Goose on the Loose caterers and Emily Wisher floristry meant the day ran like clockwork. Standing next to Lucy Davenport, photographer, whilst the guests dined on the finest fillet and drank fine wines, she pointed out that she’s never seen such a team work like this at an event. What a wonderful compliment from a lady we had only met 4 hours ago. And I’d have to agree.