Every detail of this wedding has a personal touch or is bursting with sentiment. I adore Bride Kayleigh's gown, especially as it was handmade by her Mum, talk about talented. The gorgeous lace and that open back are simply stunning, and If anybody would like to gift me a pair of Valentino Rockstud's that's more than ok by me..... I love that there was only one place for the marquee reception too, that being Kayleigh's parents farm, with friends and family rallying around to bake cakes and craft DIY decor to create the perfect rustic haven to celebrate. This fabulous wedding just goes to show you can have a truly beautiful day your way whatever your budget. 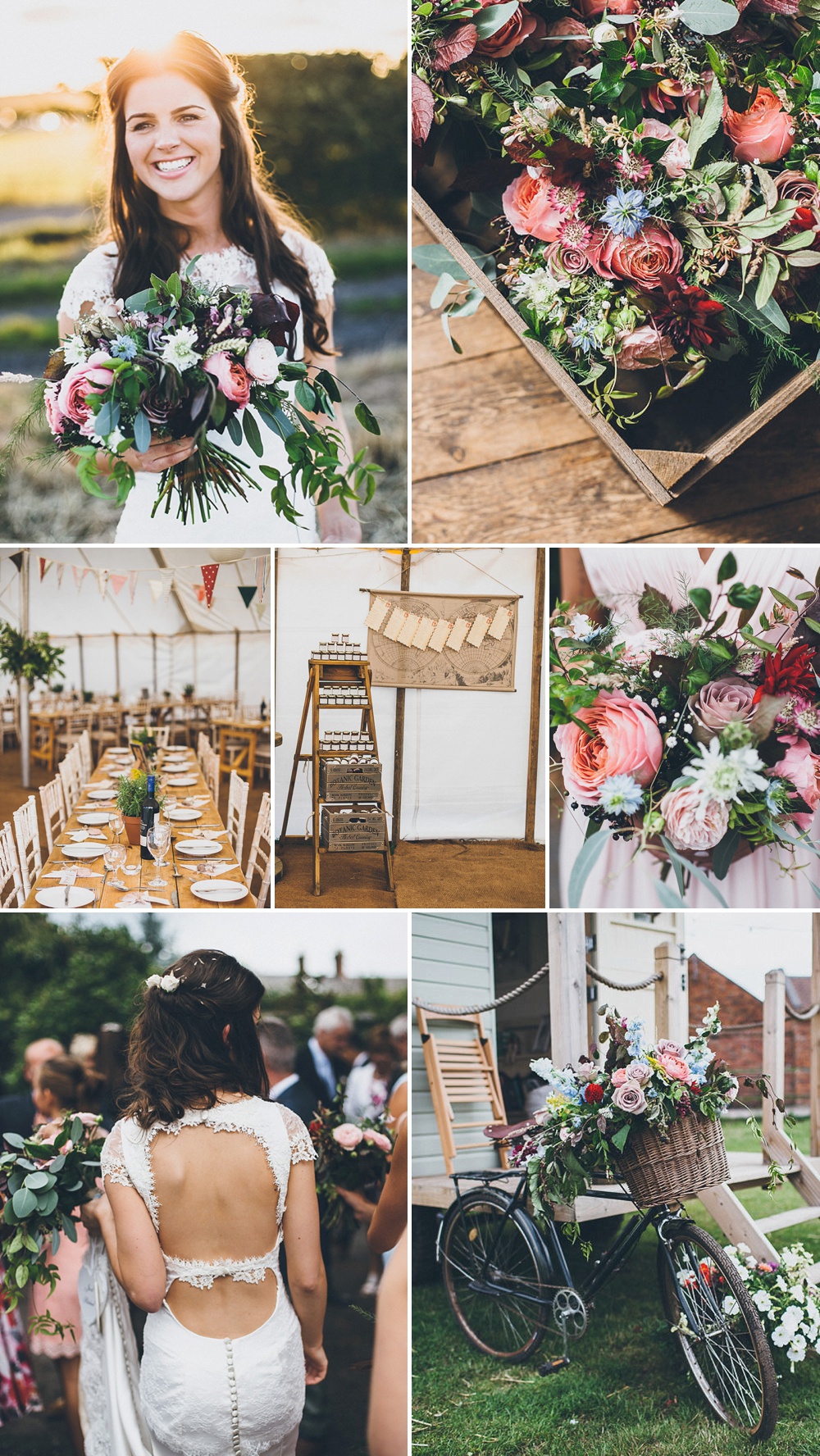 Kayleigh The Bride: I always knew I wanted my Mum to make my wedding dress but we visited some local wedding dress shops for inspiration. I really liked the style of Claire Pettibone’s dresses but luckily didn’t fall head over heels in love with ‘the dress’ and my Mum and I set to work incorporating the elements I liked from different dresses, using silk charmeuse and Chantilly lace – the result was more than I could have hoped for and my dress received so many compliments. My shoes were a showstopper too – I had my heart set on Valentino Rockstud stilettos and couldn’t justify the cost but my best friends and bridesmaids surprised me with a pair on the eve of the wedding, I really couldn’t believe it – they were the perfect fit and they had to be prized from my grasp when I went to bed! The bridesmaid’s dresses were the first thing we bought, they were by Mango Suit in a pale pink crepe which suited the three blonde bridesmaids down to a tee.

Louise at No. 27 floral design took my very loose brief and worked her magic – I only knew that I wanted lots of greenery with wild-looking flowers and gypsophila in bouquets and arrangements that were loose and not too ‘done’ and we were thrilled with the result.

Nottingham Marquee Company provided the marquee which we erected at my parents farm in the Nottinghamshire countryside.

We sourced and prepared the canapes and the Mother of the Bride spent the days in the lead up to the wedding slow-cooking 10 joints of pork for the evening’s pulled pork rolls and hog roast. We wanted the wedding breakfast to be a country picnic, so with the help of some fantastic family friends we served cold meats, pork pies, salads and new potatoes, followed by ‘cheese’ cake which we built ourselves and a table of at least a dozen different cakes which we asked our family and friends to make and bring along. Key suppliers were Howicks and Alan Knight Butchers who made legendary pork pies which the guests are still raving about. We stocked the bar ourselves and asked our local landlady to run the show, donating all of the profits to charity.

Ben The Groom: In keeping with the theme we needed outfitting which was fit for a country squire. The grooms party were fitted out in 3-piece lightweight tweed suits from Walker Slater. Kayleigh was nervous that the grooms party might not be identified as we were all wearing different colours and styles but matching accessories brought it together.

Sophie Botsford drew the venue for us which we incorporated on the wedding invites and order of service. Calligraphy on signage, invites, place names and table centrepieces was created by the bride herself Etsy shop KayleighTarrant

Kayleigh The Bride: Reclaimed wood and pared-back natural materials featured heavily in the day, as did lots of lighting from festoons, fairly lights, candles and huge LOVE letters supplied by HMC Production. Not forgetting the paper lanterns and copious amounts of bunting strung back and forth in the marquee (again crafted by the Mother of the Bride). There were scrubbed wooden tables supplied by the Wooden Bench Hire Co., wooden tree rounds for the table centrepieces, Swedish fire candles were sought out by the Bride’s Father who also helped to build the bar with the aid of Ashley Gilman Carpentry Services. A Shepherds Hut crafted a few years previous by the same handy duo became a DIY photo booth with lots of props on loan from family and friends.

Entertainment was provided by acoustic duo Monroe who sang in the church and at the drinks reception. The evening’s entertainment started with a couple of sets by Growling at the Badger, the band that the Bride’s Father has been singing in for the past 20 years, followed up with a disco by Sam Franklin.

Following a last minute breakdown of a family friend’s duck egg blue Morris Miner the Bride’s Brother-in-law stepped in to transport the Bride in his Land Rover Defender which suited the theme perfectly.

Matt Horan was an old friend of the bride but bride and groom liked his unobtrusive style, capturing the moment without endless formal family pictures, we received so many compliments on them so we were thrilled.

Paige and Katie from Studio 83 were on hand for all things beauty-related in the run up to the big day as well as the make-up for the bridal party. Nails were manicured by a friend of the bride and Elle from The Tier was in charge of the bridal party’s hair which was to look ‘undone’. Some simple ivory roses and gypsophila finished off the Bride and Bridesmaid’s hair.

Special thanks have to go to the Bride’s parents who made it all possible to host the wedding at their home and made most of the décor and a lot of the food, as well as close family friends the Howicks, who generously gave up their time to prepare a fantastic wedding breakfast and helped tirelessly in the lead up as well as with post-wedding clear up efforts! We couldn’t have pulled it off without them!