I love that this stylish wedding starts with the boys all grooming themselves at the barbers before the big day, It's not all about the ladies you know, ok it mostly is ;) Especially when the bridal party look as fabulous as this one. Bride Lauren's Bluebell Alice Temperley gown is immense in every way, with an adorable peplum waist, and delicate lace bodice it ticks all the fashion boxes. As for her best girls, they don the sweetest of mint dresses with gorgeous high low skirts, and illusion separate tops. The sentimental ceremony took place in the town hall, a place that means a great deal to the couple, before they took a short taxi ride with Eclection Photography to visit their favourite city sights, and capture some fabulous urban portraits. Back at Katchette (under the arches off Old Street) The Wedding Arrangers organised a party to remember with fairy lights, an amazing band and Aperol Spritz. To say it's epic would be an understatement.

Lauren the Bride: I was worried I wouldn't like any traditional wedding dresses as I had no clue what I wanted and tried on quite a lot of dresses without much joy. I live in London but am from Somerset and my Mum booked an appointment with Carina Baverstock Couture in Bradford-on- Avon. The second we walked in we knew we were in the best hands, Carina was amazing at listening to us and helped me narrow down the type of thing I would like. The second I tried on my Alice Temperley Bluebell dress I knew it was the one for me. I felt like me in this dress, it was so comfortable. Carina was great at knowing exactly what alterations I needed to really make it work for me. There was no contest of ever getting it from anyone else. I wore a simple long veil from Carina and Enchanted by Liv Hart Helena hair comb that I had made. I chose to do my own hair and make-up as I felt more myself that way.

Mark wore a dappled grey 3-piece suit from Reiss and burgundy brogues from Church's. We asked the groom party to wear their own blue suits as we didn’t want it to feel overly formal but had matching ties and pocket squares in a pale green made to complement the bridesmaids and colour scheme.

We met in London and have lived our entire relationship here so we always knew there was no where else that would feel right when we got married. Our first home together was in Islington just off Upper Street behind the Town Hall and we always said that if we ever got married it would be there because everyone always looked like they were having so much fun when we used to walk past and a wedding was going on. So when it came to our big day, we knew the ceremony had to be there meaning we just needed a venue for the reception. We now live in East London and, after looking at a few different local venues, we were recommended Kachette by a close friend. After looking around, we knew it ticked all the boxes. Located in an old Underground station, it had two amazing exposed brick arches, was right in the middle of Shoreditch, close to the Town Hall and had bags of character. The arches meant we could have the wedding breakfast in one and the party in the other without people having to hang around whilst things were set up. Also, because it was not an exclusive wedding venue, it had disabled access (crucial for Mark’s nan!) and we were able to extend the license until 2am meaning we didn't have to stop the party early which was a big thing for us.

After we chose Kachette as our venue, we knew that the colours needed to be quite neutral as the exposed bricks and lighting in the arches offered so much that we just wanted to keep the colours simple and fresh to compliment those features and not take away from them or clasht. We had no idea on an actual colour scheme until we saw these beautiful bridesmaid dresses on ASOS and felt their soft mint colour would work perfectly and then settled on wild and natural looking flowers in white with foliage.

Our flowers were done by Birksen in Clapham. I really wanted someone who understood the aesthetic of the venue as it wasn't very traditional. The second I walked into their beautiful shop I knew Birksen were the ones and I wouldn't need to give them much direction as they would just be able to work with the space. They created a beautiful cascade of green foliage down each of the hand rails on either side of the entrance to Kachette together with a stunning arch and staircase garland inside the venue. For the dining space we added simple clusters of jam jars with white flowers and foliage on. I had no preference on particular flowers, more just a look, and Birksen were amazing at creating the look I envisaged but wholst still managin it was cost effective. Everyone commented on the flowers on the day and they added so much to the space. For my bouquet, I wanted something messy and natural and when it arrived I was so pleased with it, they created exactly what I had in mind.

After we found the venue, we did feel like we had quite a big job on our hands as Kachette is such a blank canvas. However, one of the recommended suppliers we were lucky enough to make contact with was Chris from The Wedding Arrangers. He proved absolutely invaluable to us and was a joy to work with. We simply gave him our budget and explained what we had in mind and he was able to tell us exactly what would work or suggest appropriate alternatives to keep costs down where needed. He recommended our photographer Heather to us whose work we had already come across, put us in contact with the band and arranged a hundred other little details, the most important of which was the food. We didn’t want a traditional 3 course meal so Chris and the caterers designed an amazing North African menu consisting of big sharing platters and bowls including a mouth-watering tagine and all the trimmings. We were concerned from previous experiences at other weddings that there would not be enough food but Chris ensured there was plenty to go around and the feedback was overwhelmingly positive – even from guest with more discerning palates (read fussy)! We chose not to have a dessert and instead went for wheels of cheese and a simple two-tier store-bought chocolate wedding cake. He set up our whole venue from our simple written instructions meaning we didn’t have to worry about a single thing on the day as he had everything in hand. He was able to pre-empt potential pit falls on the day and suggest alternatives to us and manage our timeline like a pro so we could just enjoy ourselves . He was really amazing and made our day go without a hitch or any stress to us.

We came across Heather’s work on another blog post and then she came highly recommended by Chris. As soon as we met her and saw more of her work, we knew she was the perfect photographer for us. She captured our day and the mood beautifully. We only have to look back through our photos and we feel like we are reliving the day all over again. She was so lovely and down to earth with an impeccable eye for what will make a great shot. We didn’t want too many posed photos and Heather is a master of the candid shot. She even helped with my veil and had snacks in her bag to keep us going before the wedding breakfast as we drove round some of the East London spots that are personal to us! We think these pictures speak for themselves and show her amazing talent and we couldn't be happier with how they turned out.

For the later part of the evening, we wanted something with a bit of soul. Chris recommended a great band called Party Up – a 6 piece funk and soul band complete with saxaphone. Our first dance was ‘Is This Love ‘ by Bob Marley and, by happy coincidence, Party Up had added this to their set list earlier in the year. Some might say it was meant to be! Party Up did a number of sets throughout the night and went down an absolute storm. The undoubted highlight was their garage medley taking us and a large number of our guests back to their teenage years! They also agreed to provide a DJ Set until the early hours as part of the cost and were good sports when some of the more questionable song requests came out towards the end! 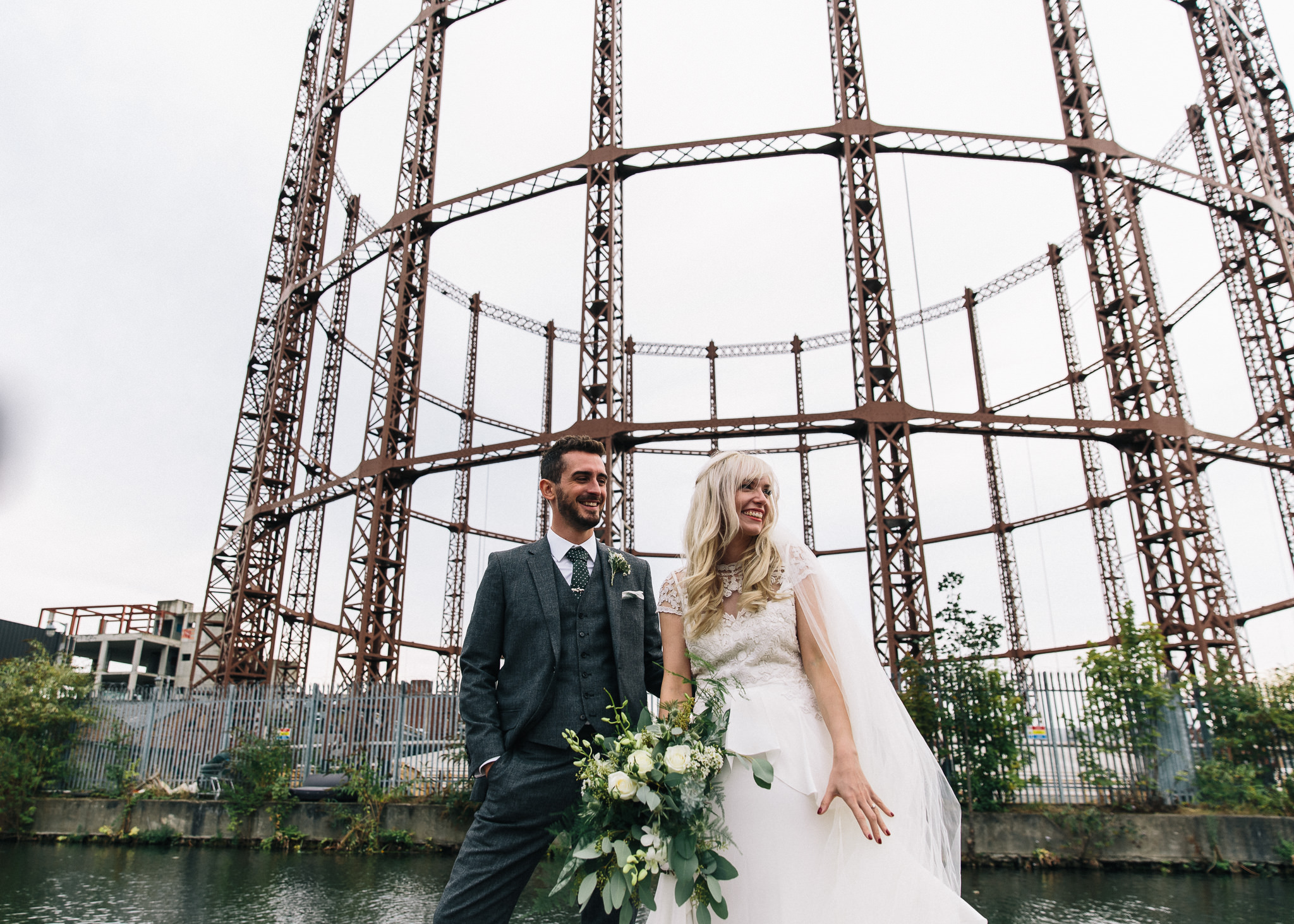