Once Upon A Destination Wedding

This afternoon sees the start of a brand new series of blog posts for you lovely readers, which will resonate with anyone planning a destination wedding. We'll be welcoming Bride-to-be Chiara to RMW once a month for a feature which will cover everything you need to know about planning a destination wedding - with a large pinch of decor and floral inspiration thrown in for good measure. Chiara lives in London and is getting married to her handsome fiancé Oliver in Umbria, Italy next year. For her first post, we hear the story of how our couple met, the proposal and their overall theme and ideas for the big day. We begin with an epic poem, written for the lovely couple by one of Chiara's best friends... 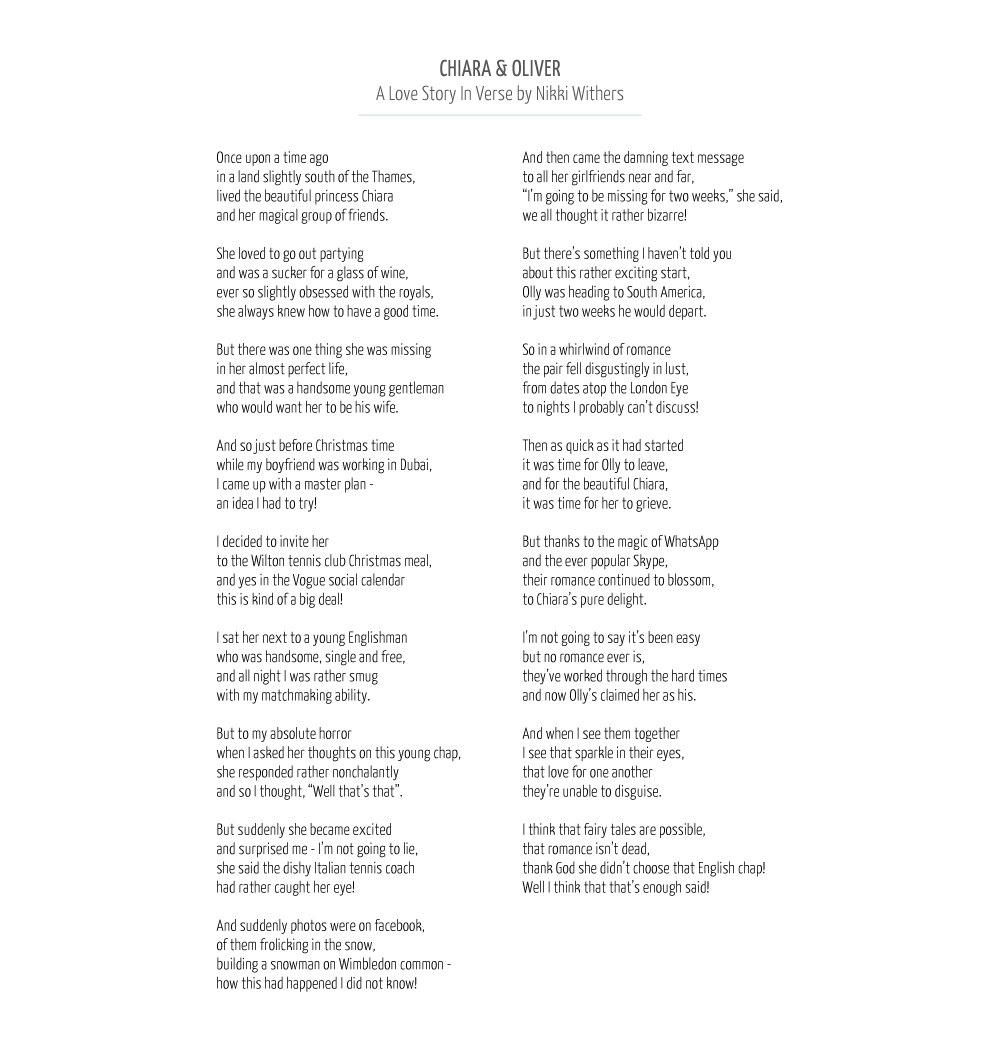 Chiara The Bride: So, after several years of man-apathy, and on the brink of what seemed like impending spinsterdom, it finally happened. For the first time in a long time, I crossed eyes with someone across a crowded room who made my heart race and my stomach flutter. Who was this handsome young lothario sitting at the end of the table? And why hadn’t my friend set me up with him?! She told me he was the club’s tennis coach, from Italy, apparently, but moving back to the country in the next month. ‘Perfect’, I thought. I was in need of some eye candy to help me get back in the game, and being foreign he probably wouldn’t realise how terrible my game actually was. Plus, he was leaving the country soon so if things got really awkward I’d never have to seem him again. The conditions were ideal... It turns out he’d done his research on me too, and as I made my way to the ladies to lacquer my lips, I heard a loud comment about Malta that made me stall (I'm part Maltese). When I turned around to look, it was none other than the Italian tennis coach - throwing flirtatious comments my way...! Grateful for the easy bait, I made the next move and for the rest of the evening we were inseparable. Fast forward a few weeks, and I was knee deep in the sea of love. The only obstacle in my way was of course the English Channel and several thousand miles. For in just one week, this Italian dreamboat was leaving London and moving back to Italy for good. To make matters worse, he was also planning a six month trip to South America where he was bound to meet a Brazilian goddess and forget about my existence completely. So, I did the unthinkable. I defied 15 years of advice on dating etiquette from friends, magazines, that annoying film we all hate to watch in a relationship crisis but is always right, goddammit, and I said the one thing we girls have been tutored NEVER to say. I told him I was falling in love with him. I had nothing to lose after all, but to my complete surprise the gamble paid off and he replied rather naturally, ‘ti amo anche io’. So despite only knowing each other for three weeks (note: I have had longer relationships with a piece of cheese) we decided to give long distance a go (cue immediate relationship status update on Facebook – only five years in the waiting). The six month trip to South America was subsequently shortened to three, and while it certainly wasn't easy, we persevered and made it work. As soon as he returned from South America, he moved back to London and here we are now - two and a half years later - engaged to be married!!!!!

I pretty much knew Oliver was going to propose the day he did. Being Italian he’s not shy with his feelings so we’d discussed getting engaged and we’d even looked at rings together, I just wasn’t sure which day he’d pop the question. So when I woke up one morning and found a card on my bedroom mirror saying, ‘meet me tonight under the London Eye’, I guessed that by the end of the day I might just have an engagement ring on my finger! The entire day at work was a complete write-off. I assumed I’d be as cool as ice based on the fact I knew what was coming, but I was a nervous wreck, unable to focus on anything. I had no idea what he’d planned or how he was going to propose, so the suspense and excitement throughout the day was completely overwhelming. When I met Oliver at the London Eye, he told me we were revisiting all the places we went on our first few dates, which started off with a romantic stroll along London’s Southbank. After a few pit stops at various bars and dinner at Champagne and Fromage (one of the best places in London for French cheese and meat) we made our way through St James’ Park. As we reached one of the bridges, he told me to close my eyes and I thought to myself – this is it. But instead of putting a ring on my finger, he put a blindfold over my eyes and made me walk for 5 minutes in darkness! When we finally arrived at our destination, he removed the blindfold and we were standing outside Westminster Abbey, in the same spot I’d camped three years previous for the Royal Wedding (it’s true I’m a massive Royalist). He’d prepared a champagne picnic then presented me with an album full of little notes and letters we'd written to each other over the years, pictures of when we first met, dates and holidays we'd been on...it was incredibly touching and it wasn’t long before I was blubbing! When I got to the last page, he stood up, got down on two knees (the one knee proposal isn’t a tradition in Italy and he obviously didn’t know the correct protocol!), presented me with the most beautiful solitaire diamond ring, and asked me to be his wife.

The decision to get married in Italy was an easy one. It’s an incredibly beautiful country with the most wonderful culture and cuisine, and we assumed we’d be able to get a lot more for our money than in the UK (which I’ve since discovered is not necessarily the case – prospective destination brides beware!) So shortly after the engagement we set the date for Saturday 24th September 2016. The extended gap has given us time to save money and enjoy being newly engaged before the planning chaos kicks in (and bridezilla comes out)! So with time on our hands we’ve been able to take things in our stride, which has made planning and researching more of a pastime than a chore. The only real difficulty was finalising the guest list (every couple’s worst nightmare), but we’ve ended up inviting around 100 guests and we’ll be celebrating the wedding over a long weekend.

Our Progress To Date

Planning a destination wedding is not for the fainthearted, and unless you’re hiring a wedding planner, advance planning is key! With this in mind, we’ve managed to book all but two of our suppliers within the last four months and we’ve not yet past the year mark (the bridezilla within me is having a party). So, the date is set and the venue is booked (a former monastery in the deep hills of Umbria); the wedding dress and shoes have been purchased; our Photographer happens to be one of Italy’s most talented and makes every image look like a romantic dream you want to get lost in; our Videographer is one of the few around who’s able to translate the intangible magic and emotion from the wedding day into film; my hair and makeup artist (which I found through this blog) is more talented with a brush than Van Gogh; and I’ve made and sent our 'Save the Date’ cards by email. So we’ve made good progress so far! Finding a decent live band has been extraordinarily challenging and affordable florists seem practically non-existent, but I’ve identified a few and hopefully before my next blog I’ll have some good contacts that I can share with all the Italian brides out there.

Once we’d chosen the venue and I’d found my dress, the vision for the day came together very naturally. We’ve taken inspiration from the historic structures of the monastery and raw beauty of the church, which is adorned with the most beautiful ancient frescos. The venue itself is full of antiquity and old world charm so our vision for the day is to create an enchanting, ethereal and romantic atmosphere so our guests feel like they’ve been transported to the bygone days. The floral décor, lighting and ornaments will be natural but evocative, and our colour scheme will feature rich, dark romantic hues combined with muted jewel tones and hints of gold. We also want our guests to experience true Italian culture and gastronomy at the wedding, so there’ll be a lot of emphasis on food with personal touches and a few DIY projects dotted around the place. Family is very important to us both and we’re very passionate about our own heritage, so we’ll be starting the day off with the ceremony in English and as soon as we’re pronounced husband and wife, the Italian transformation will begin...! I’m incredibly thankful to everyone at RMW for having me on board and I can’t wait to get started.