Once Upon A Destination Wedding {Why I’m Having Six Bridesmaids}

You’d think it would be obvious, knowing who your best friends are and who you’d pick as your bridesmaids, and for most of you, maybe it was. For me on the other hand, choosing my bridesmaids was the most mentally divisive and emotionally draining decision I’ve ever had to make. The only other time I’ve found myself in a similar state of turmoil was when I was 15 and had to decide whether to euthanise my physically sound but internally crippled hamster Biggles, who I loved more than my brother. Initially I tried to avoid the playground politics of picking a team of bridesmaids and at one point considered having none, but that just seemed depressing. I then considered three (to match the number of groomsmen) but selecting just a couple of girls from my best pals started to feel like my own miniature version of Sophie’s Choice and frankly, I wasn’t prepared for the emotional guilt that would inevitably ensue. So in the end, I’ve gone from having none, to what most of my friends and family secretly refer to as a RIDICULOUS number of bridesmaids. I have six. All adult. Plus a flower girl and page boy because they’re so damn cute.

How I Made My Decision

I envy those whose close friendships come in bridesmaid appropriate-sized teams or who can avoid the entire dilemma by asking their sister to take on the leading role. I don’t have a sister or a collective group of friends from school, but if my research has taught me anything, having either of these doesn’t necessarily make it any easier. What if your sister is unreliable or has terrible organisational skills? And what if your close friends don’t have the time or attributes to help you in the run up to the wedding? What do you do then? And this is where the mind games began... At first I liked the idea of a small bridal party but the two obvious people I’d have chosen (my two best friends from uni) were not necessarily best suited for the role. Although I know they’d be there for me in a genuine crisis, their response time to texts and calls is worse than 111. If I get a reply within 24 hours, it’s a real treat. One of them only upgraded her Nokia 3210 a few years ago and the other uses a mobile phone that definitely belongs in the National Science Museum. It’s so old she has to delete messages to receive new ones (because the inbox capacity is 10), it doesn’t have predictive text and it’s held together by an elastic band – but despite my persistent badgering, she just won’t part with it. She hates any form of technological interference - which part of me does admire - but when you’re in LK Bennett on the last day of the sale and you see the perfect pair of wedding shoes and need a visual opinion, it’s frustrating when you can’t get it. That’s what you need your maid for, right? Fortunately I can always depend on my mum (thanks mum), but there are always things you can’t share because they’re either a) irrelevant (pictures of bridesmaid dresses), or b) inappropriate (Ryan Gosling’s naked torso). With one girl living in Bristol and the other in the middle of a training contract, I also knew they wouldn’t be able to play an active role in the run up to the wedding, so I needed reinforcements. I have four other friends who I consider as part of my core, but as I value their friendships equally and depend on them for different reasons, deciding just one or two was an impossible task. So, I asked myself these questions: Who would be my calming influence and voice of reason when things became chaotic? Who would cause me the least amount of stress? Whose practical help and emotional advice would I need most in the run up to the wedding? Who’s shown the most amount of interest? Who knew me inside out and better than anyone? Who could I count on to burst into my room on the morning of the wedding and play ‘Wake Me Up Before You Go Go’ by Wham?... I was also torn between a small entourage for the calm, serene atmosphere, perhaps Eyna on in the background and a large entourage full of excitable chaos, female brawls for hair appliances and Justin Timberlake on repeat, but in the end I just couldn’t imagine not having all six of those girls getting ready with me. And that’s how I made my final decision. It only took me 14 months but I know I’ve made the right choice. Over the years, these beautiful, intelligent and caring women have supported me through break-ups, meltdowns, chronic hangovers and unhealthy obsessions with male celebrities (Gosling/Pattinson/Bieber to name a few), so I can’t think of a better bunch of people I’d want to spend my last few hours with as ‘Miss Chiara Raine’. 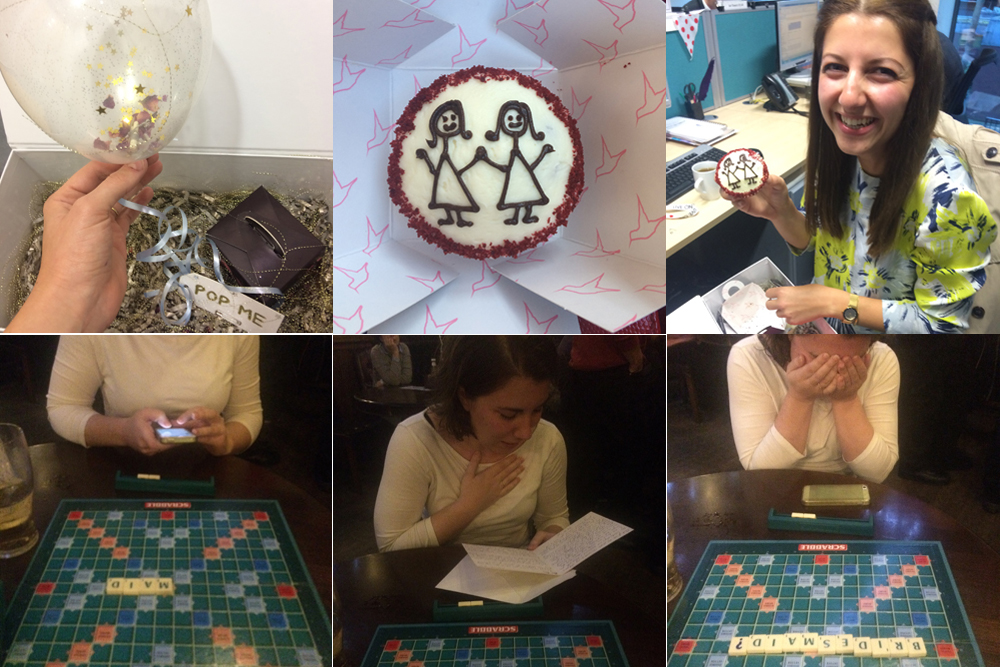 The reaction to my inflated bridal brigade has been interesting. Eyes have rolled, brows have reached heights I never knew were possible, and almost everyone repeats ‘six?!’ in disbelief, as if I’ve just pulled up my top to reveal my new pack of abs*. We Brits do love our traditions, but why does the number of bridesmaids incite such debate? Why is it that people nod sympathetically when I tell them the catering bill is 15,000 euros but then look at me like I’ve gone out of my mind CRAZY when I mention I’m having six bridesmaids? The sad thing is, opinions like this have dictated a lot of our decisions and it wasn’t until this incident that I realised how infectious they can be. For months I drove myself crazy trying to reduce my bridal party to three as I’d heard anything more would look tacky, too American and overwhelming. The fact of the matter, however, is this: nobody but you will truly understand the friendships you have, so if that means having 2, 5 or 8 of your closest friends to pour you champagne, help you into your dress and walk with you down the aisle, damn well do it. It’s your day and you shouldn’t conform to a set of expectations based on people’s reactions. So stop asking Google what the average number of bridesmaids is or whether five, six or seven is too many, forget about even numbers (is it really worth adding or excluding someone for the sake of photo symmetry?) and if anyone looks at you with a distorted face when they hear how many bridesmaids you have, stare back at their wrinkled forehead instead. It’s true that having a large entourage can be expensive, but there’s no rulebook stating that brides must pay for everything - it’s completely your choice. And while we all want our wedding vision to come together and our colour scheme to match, is it really worth sacrificing three of your best pals just so the others can have those beautiful Dessy dresses in dove grey with the silver Frou-Frou sash? At the end of the day your bridesmaids aren’t there to look pretty (although they will); they’re there to support you and form part of a very special and intimate memory that you’ll hopefully cherish forever. After 14 agonising months, I eventually realised that the physical presence of my closest friends meant so much more than what they were wearing or how they’d look in photos, so I opted for more bridesmaids and decided to forfeit the budget. *Six pack currently in production.

Based on the fact the girls would be buying their own dresses, I told them they could wear whatever they liked providing it wasn’t too revealing and they stuck to a colour palette of ivory or cream. Then one day I got an unexpected text from my Mum saying she’d transferred some money into my account to help the girls pay for their dresses. It was her gift to them and a way for her to contribute towards something special that she could take pride in on the day (cue lots of sobbing from me). Armed with a fantastic new pot of cash, I then decided I could get away with being a little more prescriptive so I asked the girls to look for long dresses that were unstructured/floaty in style so we all morphed well, while still retaining our individuality. I thought this would be an easy job but what I hadn’t anticipated was the severe lack of long ivory dresses in high street shops...! We tried on a few from ASOS but nothing set our hearts on fire so we turned more recently to David’s Bridal and Ghost. Here’s how we got on... 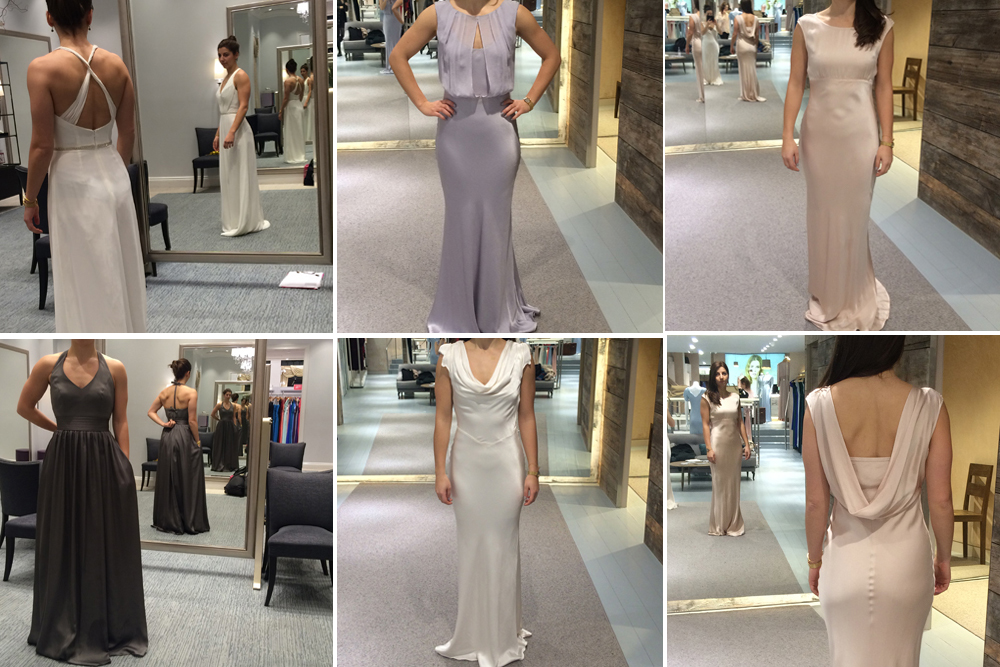 Based on an experience at a shop that stocked similar dresses, I wasn’t expecting much from David’s Bridal but it turned out to be one of the nicest experiences I’ve had so far. Part of that is probably because we had the entire boutique to ourselves, but everything was impressive; from the professional and attentive staff to the beautifully decorated changing rooms and the gorgeous collection of dresses (particularly those by Jenny Packham and Vera Wang - both of which are around £160). One of the best things we found about David’s is that each sample dress is available in a range of sizes, which means you don’t have to squeeze/get clamped into a size 10. For £7.95, you can also buy a crystal tiara that says ‘Bridesmaid’ (I’ve already ordered six).

I initially ruled out Ghost thinking the dresses would be too expensive but when one of the girls suggested it and we realised they stocked the same phenomenal dress worn by Lea Seydoux in the latest Bond film, we decided it was worth a trip (if only to see if we could look as good as Lea – which we totally did). I’d always been wary of Ghost dresses and assumed the silky satin would cling to all the wrong places, but each dress looked sublime on and created the most marvellous silhouette. Just remember to take some spanx! All the dresses we tried were from their ‘dye to order’ range which is a great option for bridesmaids. You essentially choose your favourite style, select the colour you want (there are 13 to choose from) then it’s returned to you within four weeks. The price for this service is £225 which is expensive, but the quality of the material and the cut is far superior to any other bridesmaid dresses I’ve seen or tried on. I’d love to able to tell you which dresses they’ve chosen but no decision has been made as yet! The only certainty at this point is that they're all going to look stunning and if I don’t up my game, I might just get eclipsed! (Ed: You can catch up with Chiara's previous posts here if you've missed any) x